A woman who is considering terminating her pregnancy because of financial instability has vented her frustration about her husband refusing to consider a vasectomy – despite plans not to have any more children.

Posting on Mumsnet, the British mother-of-two explained she’s been with her husband since their teens and got pregnant with their first child while in Sixth Form, although she had the contraceptive implant.

She added her most recent pregnancy was also unplanned and her husband is certain they shouldn’t keep the baby because of their current living and financial situation.

Having had three miscarriages and a previous abortion, the woman told how she’s asked her husband to consider a vasectomy because her mental health can’t cope with the guilt and loss of more unwanted pregnancies.

Responses to the post were divided – with some blasting the husband for trying to push the woman into having an abortion she doesn’t want, while others argued she shouldn’t have sex if she doesn’t want to get pregnant. 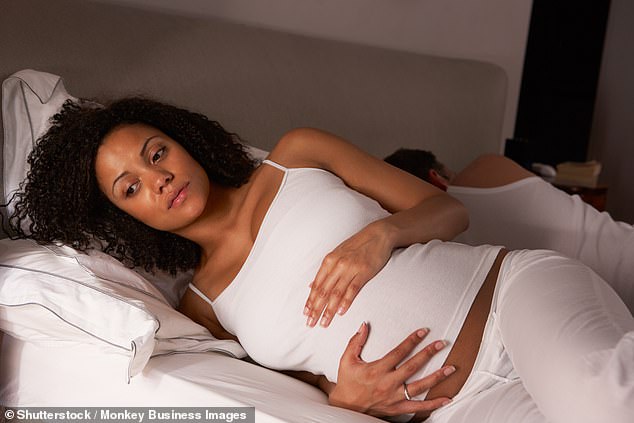 A pregnant mother-of-two, from the UK, has sparked a debate after revealing her husband doesn’t want to have a vasectomy (file image)

Shocked by her husband’s response to her pregnancy, the woman wrote: ‘AIBU to have asked my DH to consider “the snip”. I am a few weeks pregnant.

‘We have decided that I will have a medical abortion because our finances and lives have become less stable recently, we have 2DC already and this was unplanned.’

She went on to say she feels ‘very sad’ about it, but added her other half is certain he doesn’t want this pregnancy or any more children.

‘In addition to our 2DC, I had three other early pregnancies which ended in MC while trying for DC2,’ she continued. ‘My DH and I got together as teenagers at school. When I was a sixth former I has a late on termination, I didn’t know I was pregnant because I had the implant contraceptive.’

The woman told how it was ‘extremely distressing’ for her and that she went on to suffer years of ‘guilt and sadness.’

She continued: ‘So now I have asked DH to consider having a vasectomy and to research in to it. I couldn’t bare to go through this again. I am in my 30s now and still think back to my first pregnancy with lots of emotion.

‘His reply was ‘I don’t get enough sex to even think about having a vasectomy’.

‘In my mind, I have born two babies, lost three, soon to have aborted two (I feel like the worst human being writing that), and taken contraception for years on and off. I’ve had enough sex (with him) to go through all of this. 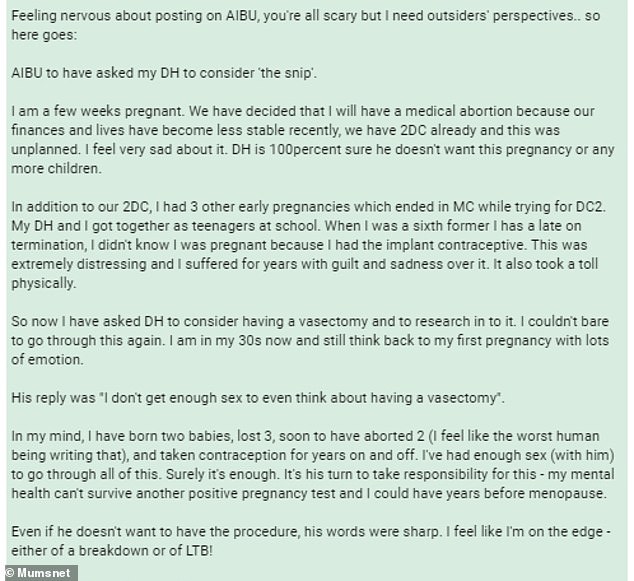 The woman took to Mumsnet explaining her husband doesn’t want to have any more children, so they’ve planned an abortion

‘Surely it’s enough. It’s his turn to take responsibility for this – my mental health can’t survive another positive pregnancy test and I could have years before menopause.

‘Even if he doesn’t want to have the procedure, his words were sharp. I feel like I’m on the edge – either of a breakdown or of LTB!’

Many took to the comments section to question whether the woman felt like she was being forced into terminating her pregnancy and urged her to stop having sex with her husband.

One person wrote: ‘He’s basically said put out and I might get the snip. Meanwhile you’re left dealing with the fall out of either having an abortion, potential miscarriage or birth of a baby you are not choosing to have.

‘How dare he speak like this and force you to have an abortion. Please do what is best for you, your dcs and your mental health. For me, sex would be permanently off the table.’

‘I’d be walking away from a man who impregnated me and expected me to abort and despite him not wanting any more kids, would still be willing to impregnate me again.

A second added: ‘He obviously gets enough sex to get you pregnant, ergo enough sex for a vasectomy. But after a comment like that, he wouldn’t be getting any more! The termination is YOUR choice – your body, not his.’

Others argued the woman shouldn’t put pressure on her husband to have a vasectomy because he should be entitled to make decisions about his own body.

One person wrote: ‘I think he replied with a d**** answer but it is his body/ his decision. I think that you should really be sure that he is the man you want to be with long term.

‘I’m wondering if along with the trauma of a late abortion and miscarriages, you’ve outgrown each other? You’ve been together since you were in your teens but had to deal with a heck of a lot.’

Another added: ‘I agree with the others that it’s his body his choice, however it’s also your body and your choice. If you don’t want to be pregnant again and don’t like contraceptives, tell him you don’t want to consider having PIV again until you are confident you are not able to become pregnant.

‘Don’t frame it as he’s not getting sex until he has a vasectomy but that you are acting on your bodily autonomy. Respect his decision and ask that he respects yours.’