A mother-of-two has revealed she had to have her arm amputated after her rare cancer went misdiagnosed by doctors for seven months – but she insists that she is actually happier than ever without her limb.

Barista Makayla Peterson, 23, from Post Falls, Idaho, first noticed a bump on her right forearm in early 2018. The bump looked as though it was gradually getting bigger so she went to the doctors to get it checked out.

Over the course of seven months Makayla went to the doctors five times, but every time she was told that the bump was a benign tumor or a bruise. 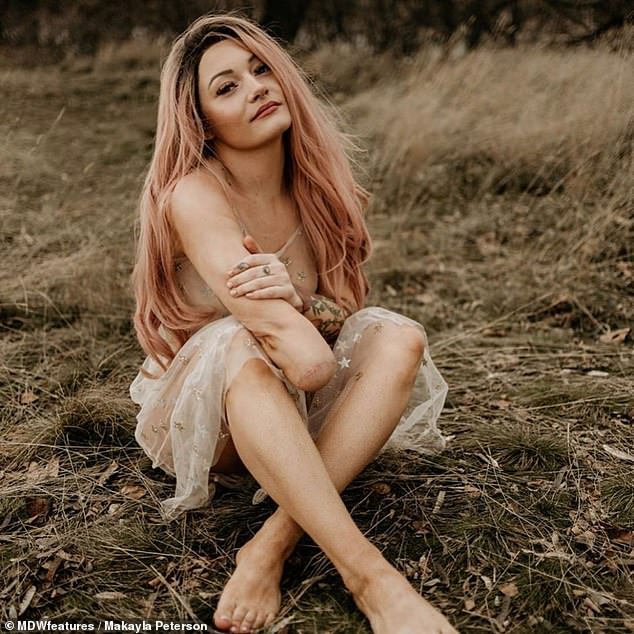 Brave: Mother-of-two Makayla Peterson, 23, had to have her arm amputated after being diagnosed with a rare cancer in late 2018 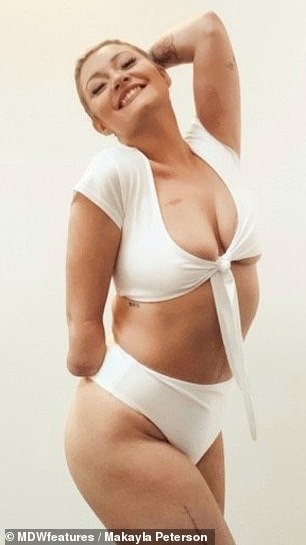 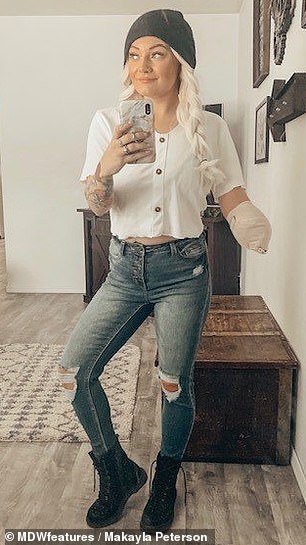 Fear: The barista, from Idaho, says she first raised concerns about a bump on her right forearm in late 2018, but doctors brushed off the lump as a benign tumor or a bruise 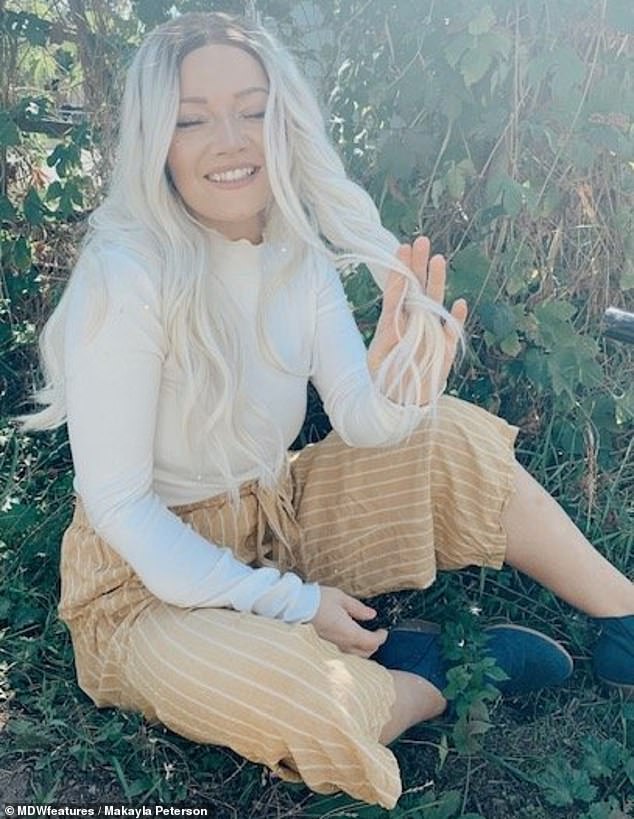 Upset: Makayla, pictured before her cancer diagnosis, went to the doctor five times in the hopes of getting a diagnosis, but each time she was turned away

By December 2018, Makayla’s bump had grown to the size of a golf ball, prompting doctors to perform a biopsy surgery, which revealed she had stage 3b synovial sarcoma, a rare type of soft tissue cancer which forms around a joint in a limb, usually in the leg or arm.

Makayla who is mother to two sons, Ashton, eight, and Finnick, two, was shocked by her rare cancer diagnosis but her naturally optimistic nature meant she was ready to face it head on.

Synovial sarcoma diagnoses often lead to amputation of the affected limb which was something that Makayla was keen to avoid.

She researched different treatment options and went to a naturopathic doctor and changed her diet and lifestyle by going vegan, cutting out caffeine and taking detox baths for seven months as she wanted to try everything possible before potential amputation.

Scans showed that Makayla’s natural approach was working but not quick enough so she then started two rounds of grueling chemotherapy in September 2019 followed by two months of radiotherapy Monday to Friday.

Eventually in December 2019, Makayla agreed to having her arm amputated as she couldn’t face any more chemo sessions, but despite initially being worried about the surgery and being frustrated that some things take her longer to do now, she loves and prefers how she looks without her right arm and is proud to be an amputee. 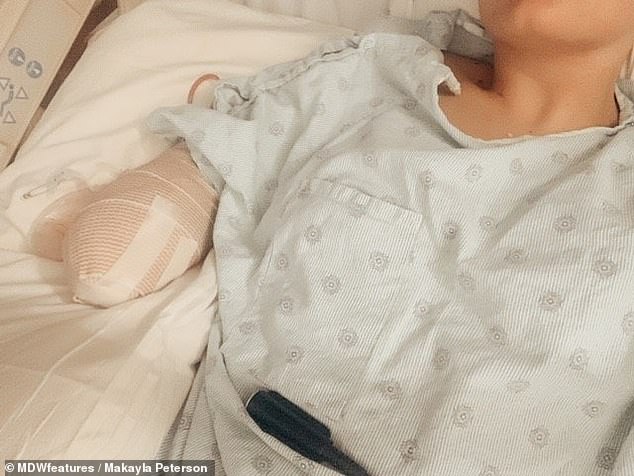 Devastating: After finally undergoing a biopsy, Makayla was told she had synovial sarcoma, a rare type of soft tissue cancer, and after chemo failed, she had to have her arm amputated 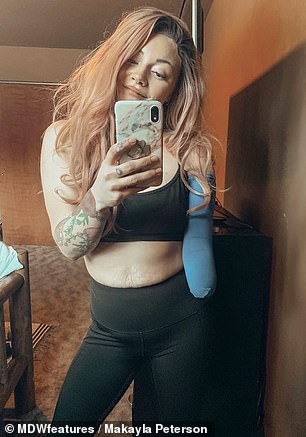 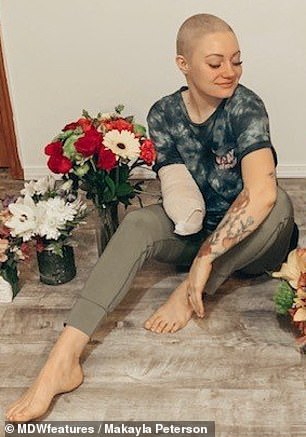 Moving forward: Although Makayla initially resisted the amputation, she says she is now happier than ever after her arm was surgically removed in December 2019 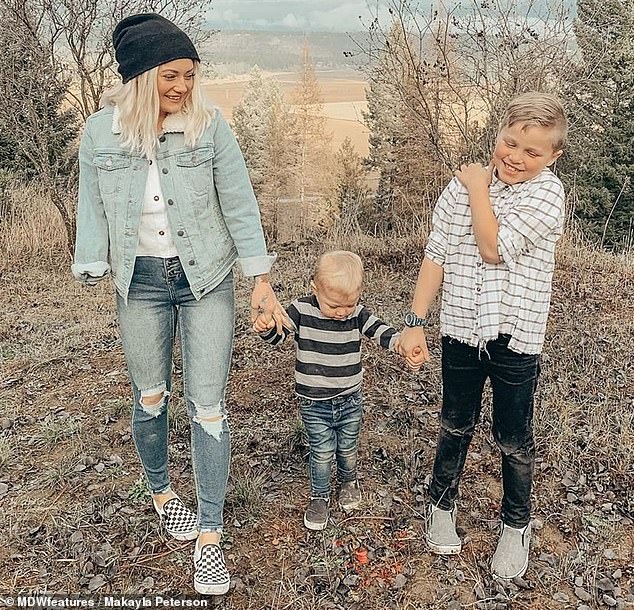 Pushing ahead: Makayla, who has two son, Ashton, eight, and Finnick, two, practiced doing things with her left hand before her surgery to make her post-op recovery easier

Makayla hopes to be an inspiration for others who are living with cancer and limb loss, to show them what makes them different makes them beautiful.

‘It [my diagnosis] was right before Christmas of 2018. I was shocked because most of the doctors and the specialist I saw said it was benign so it shook my world,’ said Makayla.

‘I had a bump in my right forearm that kept growing. I got misdiagnosed a lot. It took about six to seven months to get the right diagnosis. By that time the bump was obvious and more like the size of a big golf ball.

‘Hearing that the cancer was so rare was shocking but also cool in a sense. I am pretty optimistic and strong so I knew this is just something that would add to my story.

‘My cancer almost always ends in amputation. I wanted to try all the possibilities I could before I lose my arm. I went to a more naturopathic doctor and I changed up my diet and lifestyle. I did that for about seven to eight months. 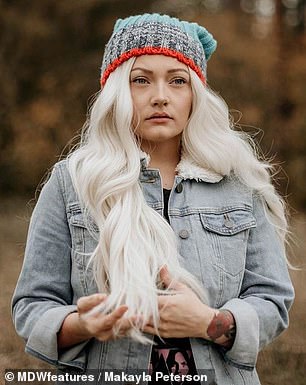 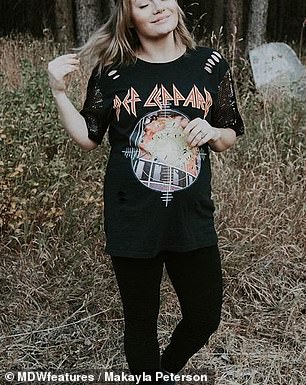 History: ‘I live a healthy life and the only other person that was diagnosed with cancer in my life was my great grandma who sadly passed away,’ Makayla, pictured before her illness, said 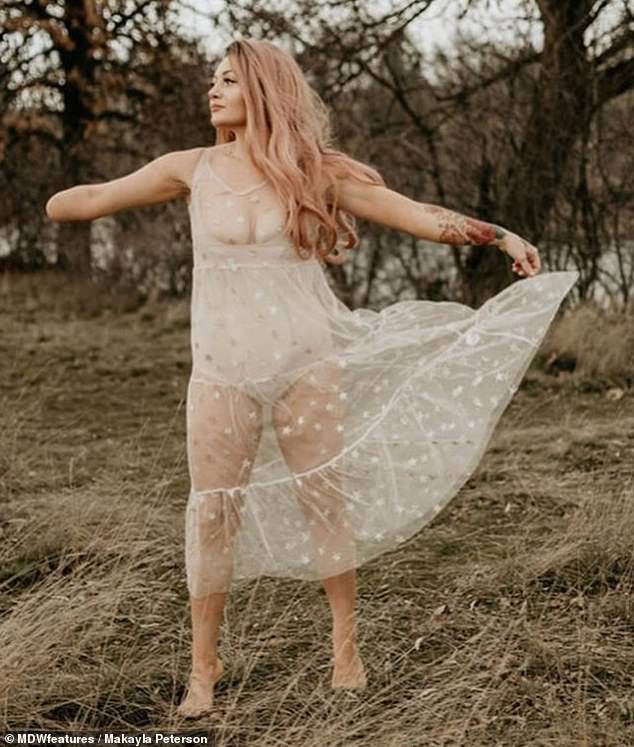 Beauty: The mother-of-two says she actually prefers how she looks with one hand, despite being worried about what she would think of herself post-amputation 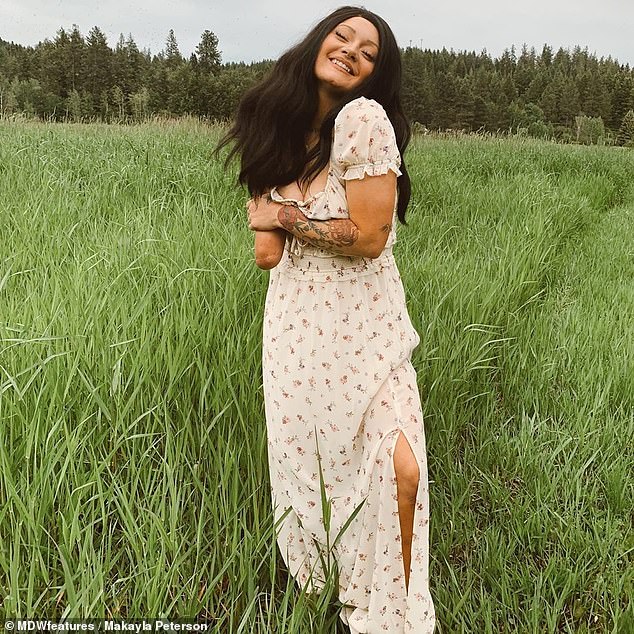 New normal: ‘The first time I saw myself without my arm I actually loved the way I looked. I prefer myself with only one hand,’ she said

‘It worked but not how we wanted it to so I decided to try chemo and radiation. I was recommended three rounds of chemo every three weeks and I would stay in the hospital for four days at a time.

‘I had radiation Monday through Friday for a couple months. I decided not to do the last round of chemo because I was at peace with the amputation by this time already and chemo sucks. 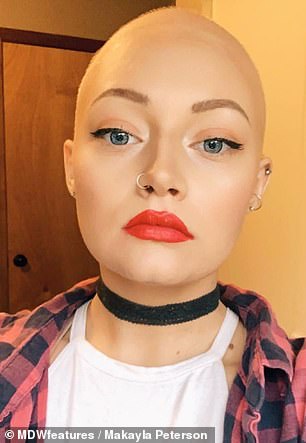 Looking ahead: Makayla’s latest scans were all clear, but she will have to be monitored regularly for the rest of her life

‘I got one of the harshest kinds [of chemo] out there. Chemo made me extremely sick and weak. I would stay at the hospital for four days every three weeks but it would take me two and a half weeks to recover from my last treatment.

‘I threw up a lot and had a very difficult time even sleeping and drinking water and it was even hard to watch TV. After chemo I was at peace with having my arm amputated and thought ‘it really can’t be worse than chemo.’

‘I practiced with my left hand a lot before my surgery. It got me used to living life and made post op a lot smoother. The first time I saw myself without my arm I actually loved the way I looked. I prefer myself with only one hand.’

Synovial sarcoma is a very rare form of cancer with only one in one million people a year receiving a diagnosis. According to Cancer.gov, synovial sarcoma accounts for five per cent to 10 per cent of soft-tissue tumors.

For every one million people, one to two are diagnosed with synovial sarcoma per year in the US.

Thankfully, Makayla’s last scan in June 2020 was all clear but she will have to be monitored for the rest of her life to make sure that cancer hasn’t returned. 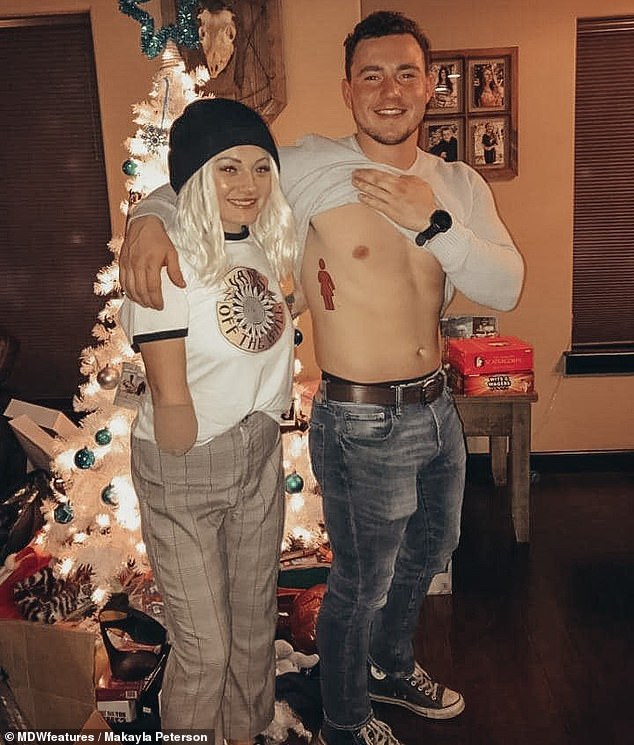 Education: The proud mom – pictured with a family member who got an amputee tattoo in her honor – says that the amputation has helped her learn to love herself 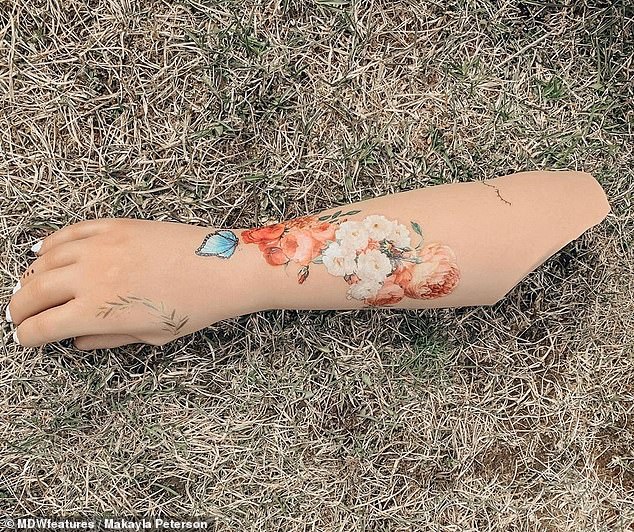 Modernization: Makayla currently has a prosthetic arm but she hopes to have a myoelectric one by the end of the year 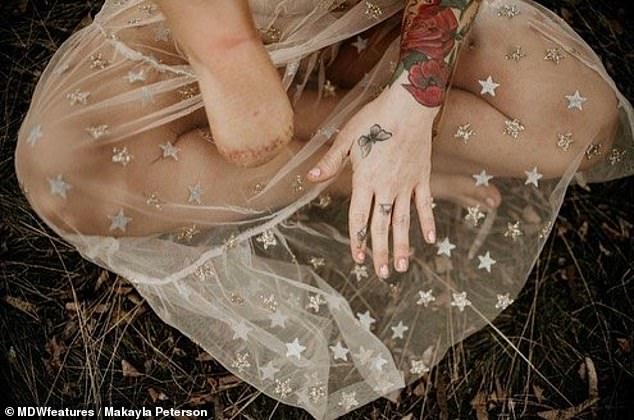 Inspiration: ‘Just because you are not society’s idea of beauty does not mean you’re not beautiful,’ Makayla shared

Makayla currently has a prosthetic arm but she hopes to have a myoelectric one by the end of the year.

‘Life after amputation never slowed down. I still have to go through the same everyday life situations and tasks,’ she said.

‘It’s easy for the most part but there are some things that I will get frustrated with. It takes me longer to do things so I’ve learned to give myself lots of grace and patience in this area

‘I wish I loved myself as much as I do now, before I had my surgery. I want people to try to get out there to see the world and enjoy life. It really is beautiful so if anything is holding you back from seeing that, it isn’t for you, let it go.

‘Looking up to amputees and following people like that helped me out so much with my journey so if I could help even one person that would be amazing.

‘Just because you are not society’s idea of beauty does not mean you’re not beautiful.

‘The things that set you apart from everyone else is exactly what makes you beautiful.’