A teenage baker has revealed his secret to making perfectly crispy French fries at home every time without using a deep fryer.

Morgan Hipworth, founder of the Melbourne business Bistro Morgan Bakehouse, shared a now-viral TikTok video exactly how he made the homemade chips crunchy and golden on the outside and fluffy on the inside.

‘Let’s make fries that are tastier and healthier than McDonald’s,’ Morgan claimed. 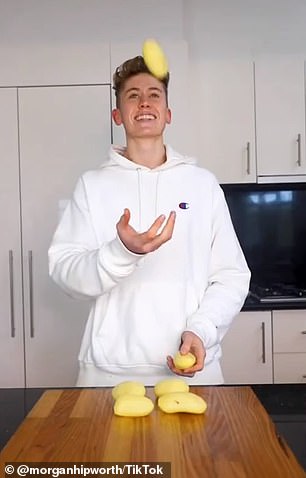 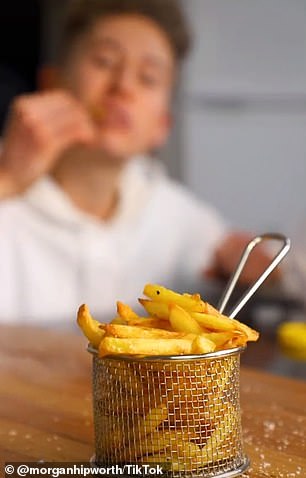 Peel and cut potatoes into fries. Place fries into a pot of cold, salted water.

Bring the pot to boil, then boil for a further two minutes. Drain the potatoes and transfer them to a baking tray. Season with salt and your favourite herbs.

Bake for 25 minutes at 200C or until crispy and golden all over.

Remove the tray from the oven and serve.

He started by peeling and cutting the potatoes into sticks.

‘First up, we need to peel and cut the potatoes into fries. Add the fries to a pot with cold water and sea salt,’ Morgan explained.

Then he parboiled the fries, bringing the potatoes to boil for a further two minutes.

Parboiling potatoes in a pot of salted water will slash the roasting time in the oven and ensure the insides become really fluffy.

He drained the potatoes and transferred them onto a baking tray.

‘Bake with olive oil, salt and your favourite herbs at 200 degrees Celsius for 25 minutes,’ he said.

‘Boom, there you have it. The perfect French fries.’ 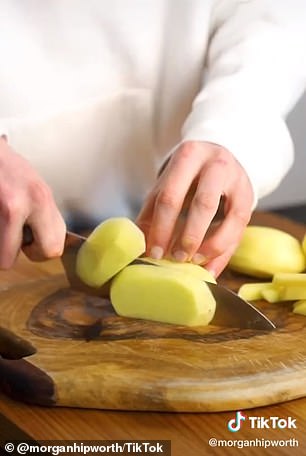 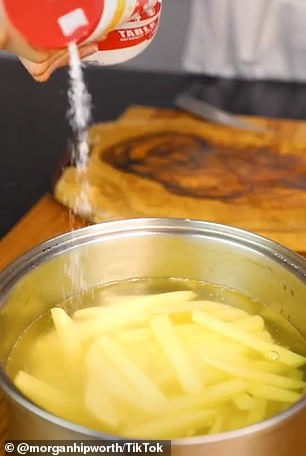 The 19-year-old used four ingredients – red washed potatoes, olive oil salt, and herbs. He started by peeling and cutting the potatoes into sticks. Then he added the fries into a pot of cold water and sea salt 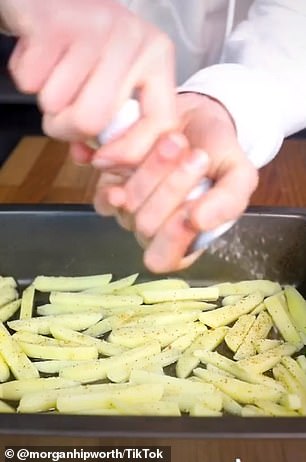 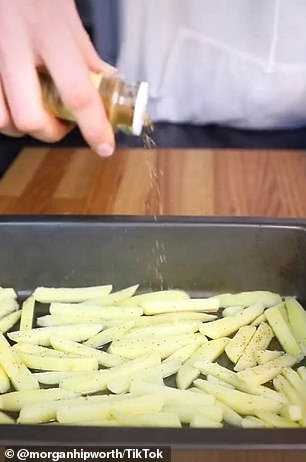 Once the potatoes are parboiled, the 19-year-old transferred them onto a baking tray where he seasoned with salt and herbs

His video has since been viewed more than 4.6 million times, with hundreds amazed at how simple and easy it was to create the fast food-inspired fries at home.

‘No way are you serious these are baked fries? They look so real,’ one said.

Many who recreated the fries at home claimed they tasted just as good as McDonald’s version.

‘I made them the way he did and they turned out really good, like actual fries,’ one said, while another wrote: ‘I just made them for dinner and they were so good.’

Some suggested roasting the potatoes with the skin on.

‘I made them and they are super good but you can leave the skin on,’ one said.

However, others said nothing could ever beat the classic McDonald’s fries.

‘You can try and do it but nothing is better than a McDonald’s fries,’ one said, while another added: ‘No chip that is baked in a oven is better than frying it’s just a rule of life.’