A 21-year-old model with vitiligo who proudly shows off her skin condition online has revealed how she is targeted by creepy men who slide into her inbox with crude and unpleasant messages.

Model and teacher, Karen Bianca Leda, from Manaus, Brazil, has lived with vitiligo all her life; those affected by the condition have a lack of a pigment, called melanin, in their skin, which causes white patches to form in affected areas.

This made Karen’s time at school a torrid one, with fellow students, friends and even teachers making nasty comments about her appearance. One even compared her skin condition to patches on a cow; on another occasion she was told that she would be beautiful if it wasn’t for her disease, a comment that made Karen frustrated. 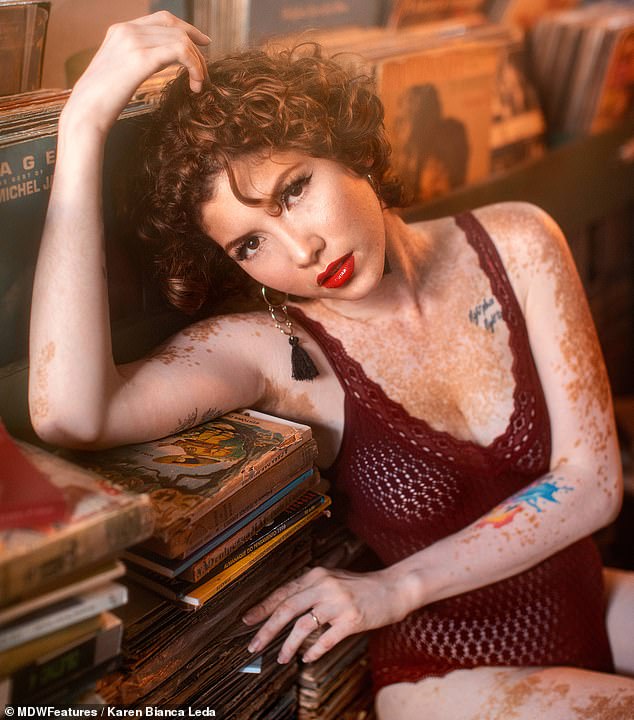 Struggle: 21-year-old model Karen Bianca Leda was born with vitiligo, a skin condition that causes sufferers to form white patches across their body because of a lack of pigment 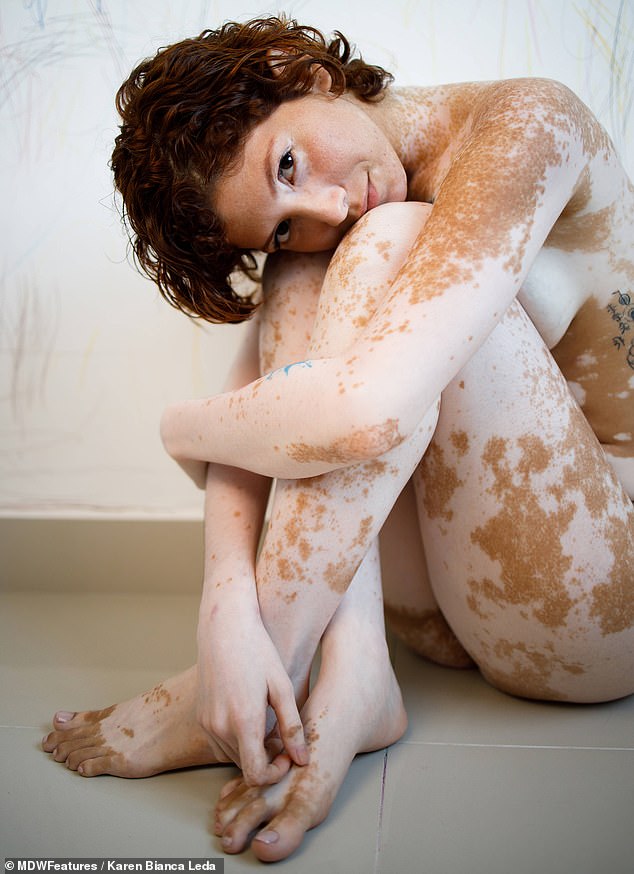 Upset: The model’s condition grew increasingly severe as she got older – and she regularly faced cruel jabs from her peers as a result of her appearance 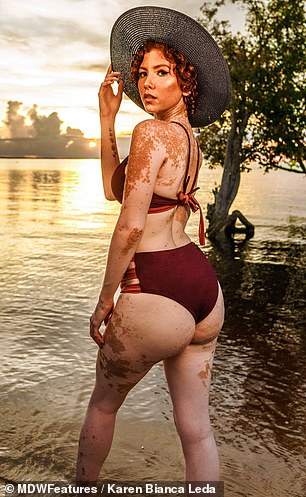 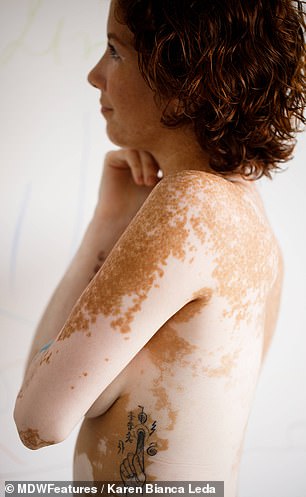 Cruel: Karen was branded a ‘cow’ by one of her teachers, and she faced regular jabs from her peers at school, too

As a child, Karen often had strangers staring and pointing at her in the street. Her mother Darcy, 55, always tried to protect her from this type of abuse, even confronting members of the public in the street and asking them what they were staring at.

With her earliest memories including her being taken by her mother to numerous doctors to try and find a cure for her condition, Karen always thought of her vitiligo as a problem.

In fact her mother persisted in trying to find treatment for her daughter up until the age of 17, when Karen finally decided for herself that she was going to stop trying to discover a miracle cure and accept her skin condition.

At that time, Karen made a pledge to herself to not allow comments from strangers to stop her from loving her body, although she admits that this can be difficult when people confront her about her appearance in the street.

Recently Karen was advised by a stranger that she should graze her skin until it bled and then pour lemon juice over the cuts to bring the pigment back to her skin.

Men have asked Karen if her vitiligo has affected her private parts, something she finds incredibly annoying. However, for the most part, reaction to her vitiligo from potential love interests is positive as they find it unique.

‘My oldest memories are of my mother and family taking me to every possible doctor, where I tried countless treatments without any success,’ Karen said. 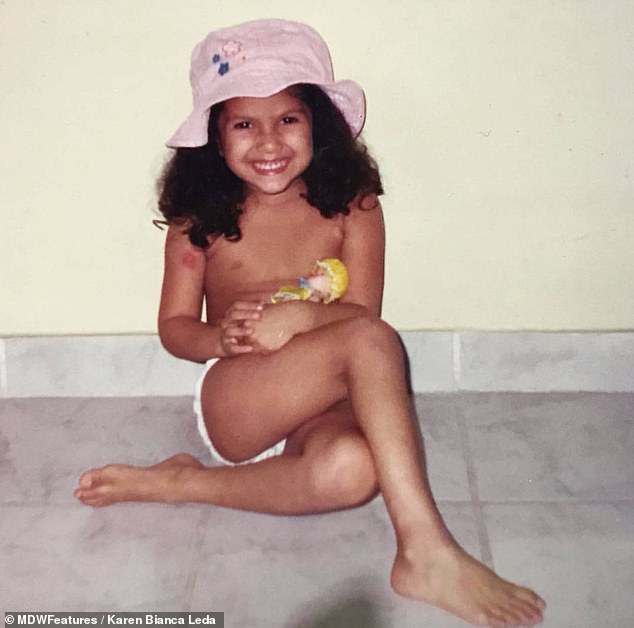 Growing up: Even Karen’s mother struggled to come to terms with her skin condition, with the model (pictured as a child) revealing that her family kept trying to find a solution for it 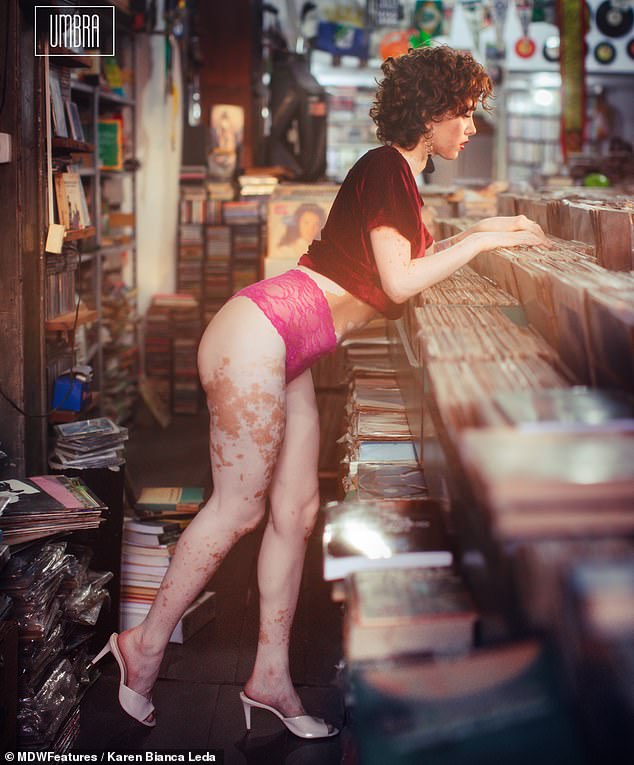 Memories: ‘My oldest memories are of my mother and family taking me to every possible doctor, where I tried countless treatments without any success,’ Karen said 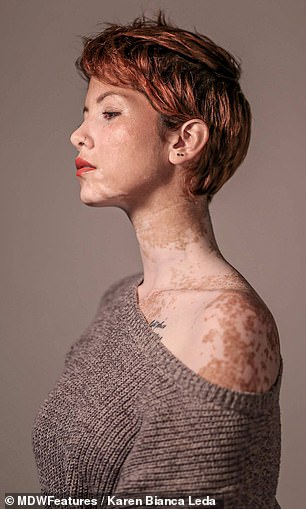 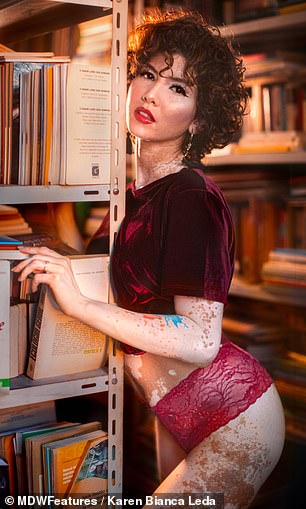 Speaking out: Karen has learned to embrace her natural looks, and she now happily shows off her skin on social media

‘I realized it was a “problem” for me when the other kids excluded me from play and made jokes about my skin condition.

‘My mother always worried a lot about what I heard from people in the street, always trying to protect my feelings when someone stared at me and even confronted people asking them what they were looking at.

‘I was bullied not only by the kids but also by teachers too. I clearly remember one comparing me to a cow.

‘When you’re a kid people think you don’t have any valid feelings at all, so they say what they like about your appearance without any kind of filter, as if you don’t have the right or ability to defend yourself from it.

‘People stared and pointed at me. Random people used to say their opinion about my skin without me even asking.

‘They would say how I’d be beautiful if it wasn’t for my “disease”, always trying to make me feel horrible about it.

‘One day I was alone taking my child home after school in the rain when a random guy approached me talking about a post he saw online about a cure for vitiligo. 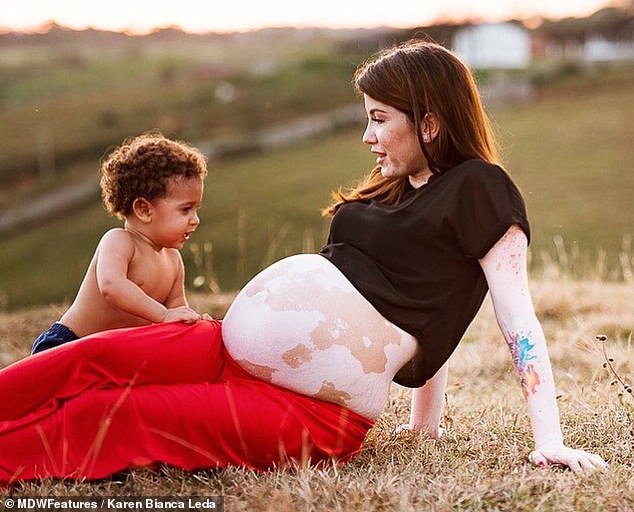 Heartache: The proud mother, pictured while pregnant, says strangers have come up to her and made horrible comments while she has been with her children 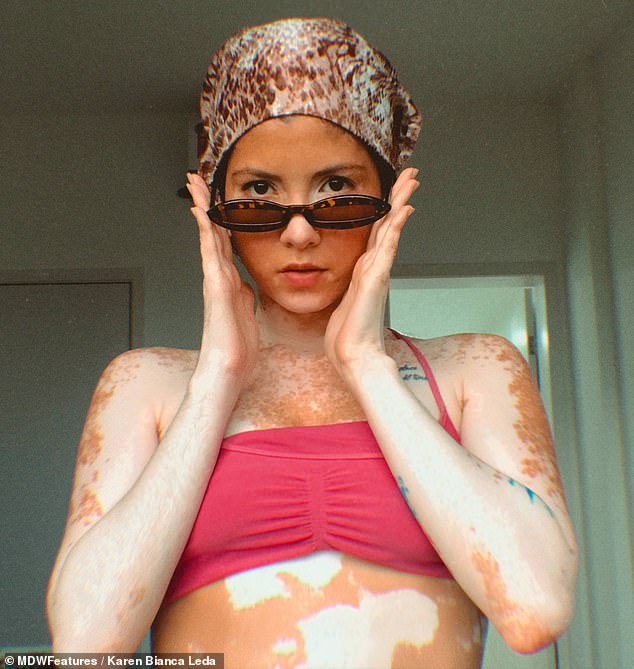 Shock: One stranger told her that she should try and ‘cure’ her condition by cutting her skin and then pouring lemon juice into it 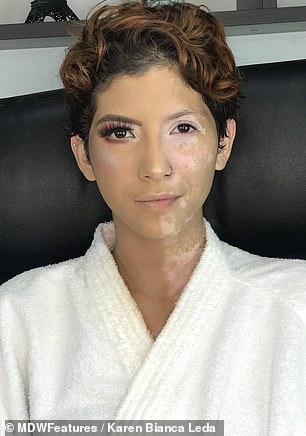 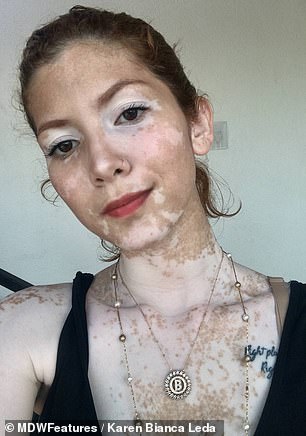 Crude: On Instagram, Karen is sent disgusting messages by men who ask how the condition affects her entire body, even telling her to send them pictures of her nude physique

‘I said I wasn’t interested, but he kept talking while my kid was crying, clearly tired and wanting to go home.

‘He said the treatment consisted of grazing the depigmented area until it was bleeding adding lemon juice and exposing it to the sun.

‘I receive a lot of daily messages from men asking to see my nips, asking if my private parts are white or not, saying how they ‘admire’ people who have vitiligo and how they’d feel glad if I sent some pictures showing it.

‘I never respond to them, always report to Instagram and block.

‘Over the years old ladies have always approached me saying how I am unique, beautiful and that I don’t have to listen to bad comments about my appearance.

‘They say that vitiligo made me look much prettier and radiant. These comments make me feel really flattered, happy and proud.’

Karen admits that she may not have even had a career in modelling if it wasn’t for her vitiligo.

Karen’s aim as a model is to represent people with skin conditions like hers.

Consequently, she has received a barrage of positive messages from fans on Instagram telling her how she has helped them change the way they view themselves. 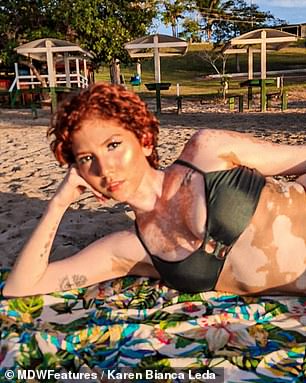 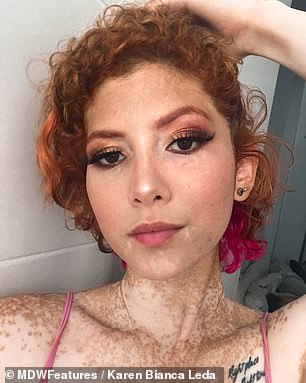 Horrifying: ‘I receive a lot of daily messages from men asking to see my nips, asking if my private parts are white or not,’ she explained 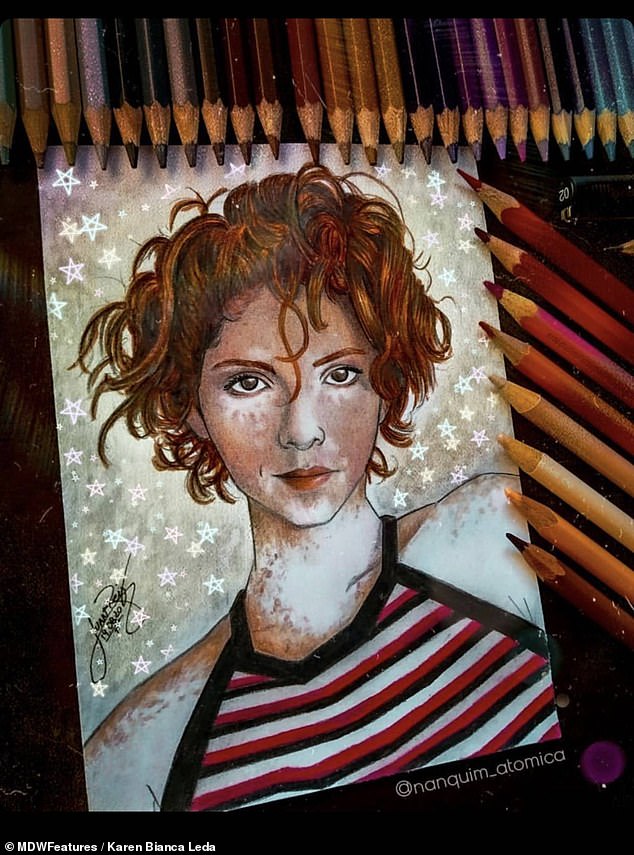 Proud: Despite this, Karen also receives an overwhelming amount of positive feedback on social media, and has built up an impressive fan base

‘To me the most important thing is to represent people with my skin condition to show that you’re able to be happy and loved just as you are, without trying to be something else,’ she said.

‘Showing freedom is the most valuable thing, freedom of being who you are, with or without melanin.

‘We all are worthy of love, affection and peace of mind.

‘A lot of people say how I have helped them to change the way they view themselves, how they can now feel represented and have found other people like them, discovering it is possible to be happy.

‘It makes me really happy, because some years ago I also felt lost, alone and now these people don’t need to feel they’re alone.

‘We’re a big community all over the world.

‘A lot of people ask me about how I start to love myself if people are rude and insensitive, and what I’ve learned over the years is that when you change the way you look at yourself, everything changes for the better.

‘You start not accepting bad friendships and relationships and everything around you starts to change too because people realize you’re no longer a fragile person that will allow them to abuse and hurt your feelings.

‘You don’t need other people’s approval. It sounds really cliché, but it’s true.’