A miracle baby girl born at 23 weeks and six days, weighing less than a bag of rice, is finally home – four months after being born in the middle of lockdown.

Tiffany Bushell, 32, and husband Matthew, 30, from Watford, Hertfordshire, welcomed their daughter Millie in April but feared she would not survive after she was born 17 weeks premature and had to fight off seven infections, including sepsis.

The tiny tot weighed just 1lb 7 at birth, had a massive hole in her heart, and spent the first five weeks of her life on a ventilator at St. Peter’s Hospital, Chertsey, Surrey, after she stopped breathing at just two days old.

But the plucky newborn defied all odds to survive and her parents are now celebrating after doctors finally allowed them to bring her home last week, with Matthew saying:  ‘We’re over the moon that she’s back. It’s like being on Cloud nine.’ 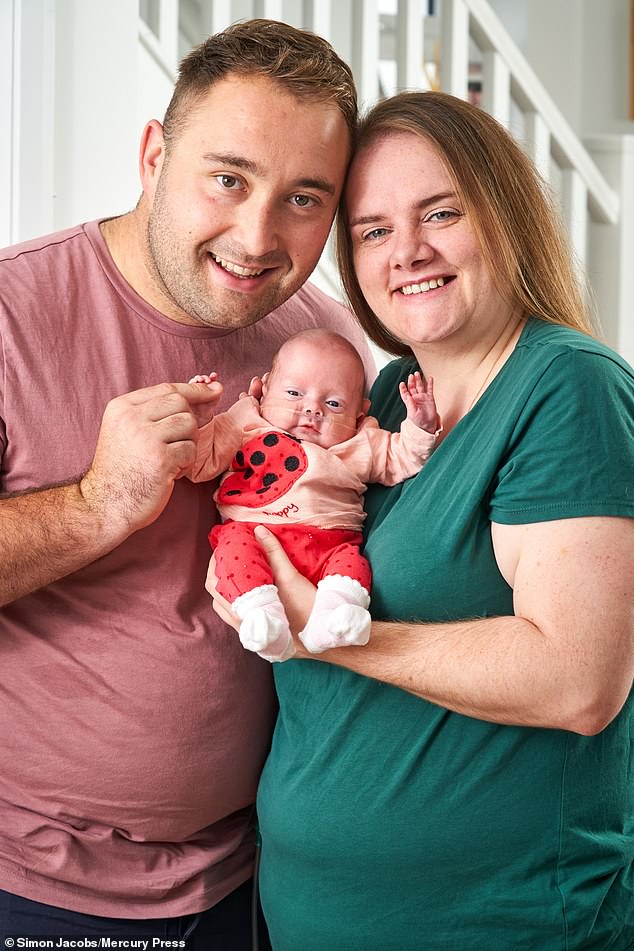 Tiffany Bushell, 32, and husband Matthew, 30, from Watford, Hertfordshire, were able to bring their newborn daughter Millie home for the first time after she was born prematurely during lockdown 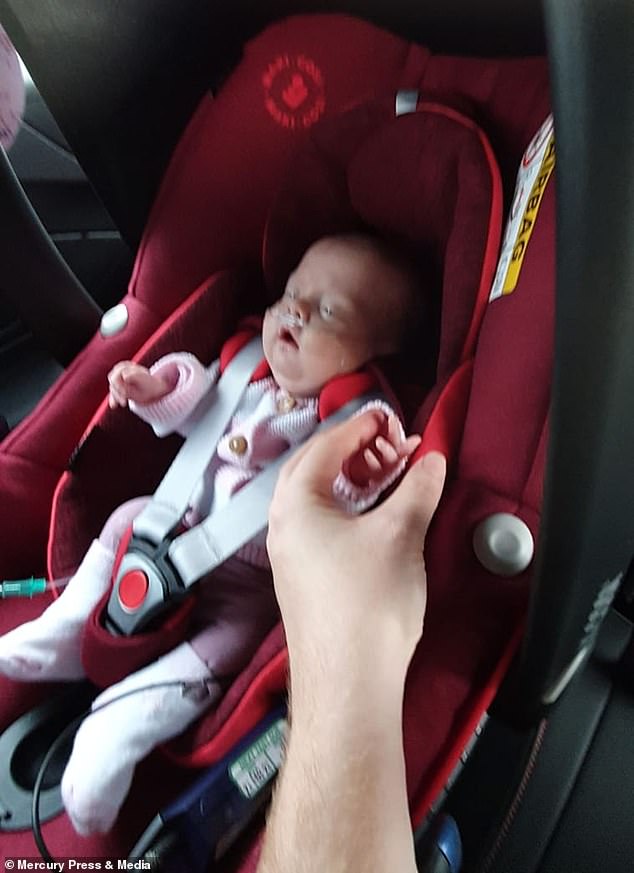 The proud parents welcomed their daughter in April but have finally been given the green light by doctors to take their little ‘miracle’ home after she had a long battle in hospital – fighting off seven different infections, including sepsis 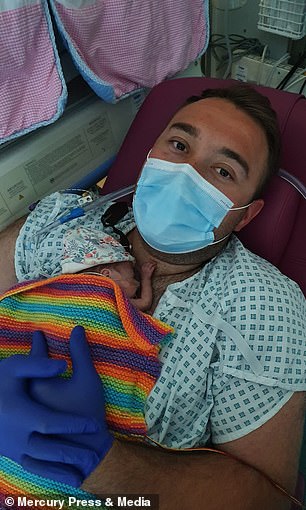 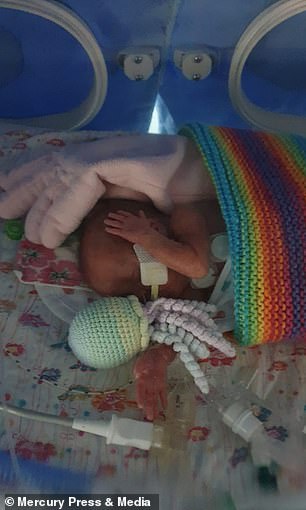 The parents were only able to spend a few hours a day with their baby at St. Peter’s Hospital, Chertsey, Surrey, where she stopped breathing at just two days old

The couple had already faced heartbreak after they lost their first daughter, Ruby, after she was born at just 24 weeks and 3 days old in 2018.

Matthew said: ‘We had Ruby for a week and then she passed away. It was the worst day of my life. It was really dark.’

The couple welcomed their daughter Millie on April 26, at just 23 weeks and six days and 17 weeks before their due date.

But they feared she wouldn’t survive weeks in hospital as she battled infections to stay alive. 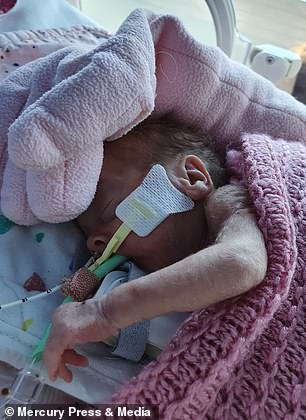 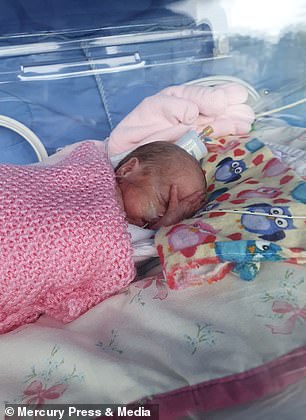 Millie was born 17 weeks premature, weighed 1lb 7 at birth, had a massive hole in her heart and spent the first five weeks of her life on a ventilator 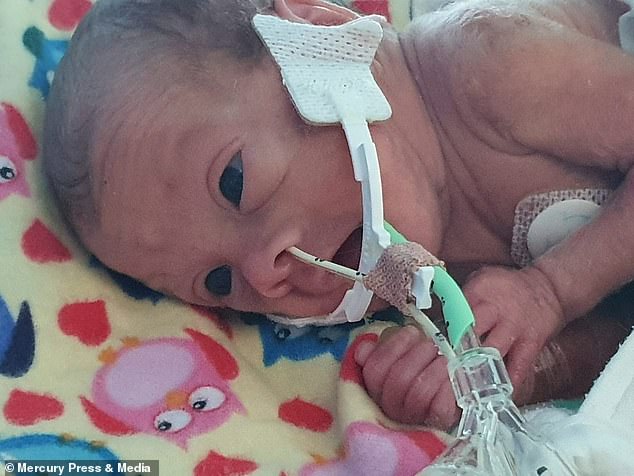 Due to lockdown restrictions, Matthew, a lorry driver, was only able to see his new daughter for ten minutes before having to leave the hospital 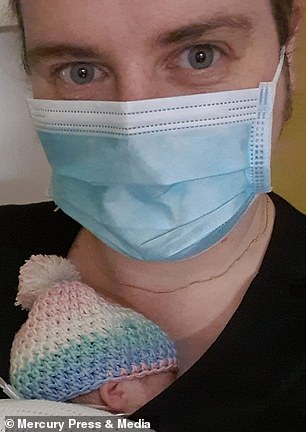 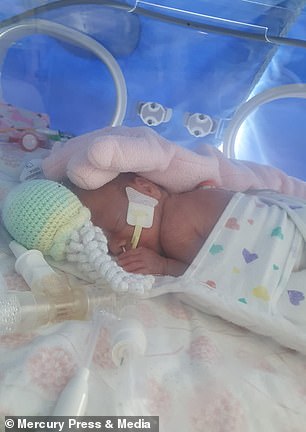 Meanwhile mother Tiffany was only able to visit her daughter for two hours per day and could only hold her newborn daughter while wearing gloves (left, and right)

Due to lockdown restrictions, Matthew was only able to see his new daughter for ten minutes before having to leave the hospital.

For the first week, he could only see Millie via video call, while mum Tiffany was restricted to visiting her for two hours per day and could only hold her newborn daughter while wearing gloves.

The tot fought off seven infections, including suspected sepsis, and recovered from surgery to fix the hole in her heart before doctors deemed her fit enough to return home.

The couple were finally able to bring her home after four months in the hospital, and said they are now looking forward to introducing their miracle baby to friends and family.

WHAT IS A PREMATURE BIRTH, AND WHAT ARE THE RISKS TO BABIES?

Around 10 per cent of all pregnancies worldwide result in premature labour – defined as a delivery before 37 weeks.

When this happens, not all of the baby’s organs, including the heart and lungs, will have developed. They can also be underweight and smaller.

Tommy’s, a charity in the UK, says this can mean preemies ‘are not ready for life outside the womb’.

Premature birth is the largest cause of neonatal mortality in the US and the UK, according to figures.

Babies born early account for around 1,500 deaths each year in the UK. In the US, premature birth and its complications account for 17 per cent of infant deaths.

Babies born prematurely are often whisked away to neonatal intensive care units, where they are looked after around-the-clock.

What are the chances of survival?

Tiffany, an embroiderer, said: ‘She’s a miracle. Now she’s here, it’s such a weight off our shoulders.

‘Were so relieved that she is at home and it makes us realise how far she has come.’

She added; ‘We’re fulfilled – we’ve been waiting for this moment for so long.’

Meanwhile Matthew said: ‘We are in a much better place now. I want to thank all the hospital staff for doing their best. 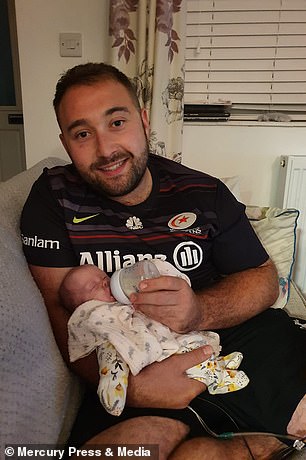 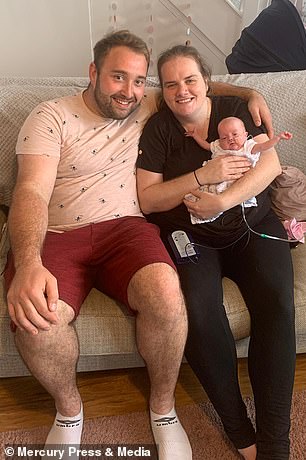 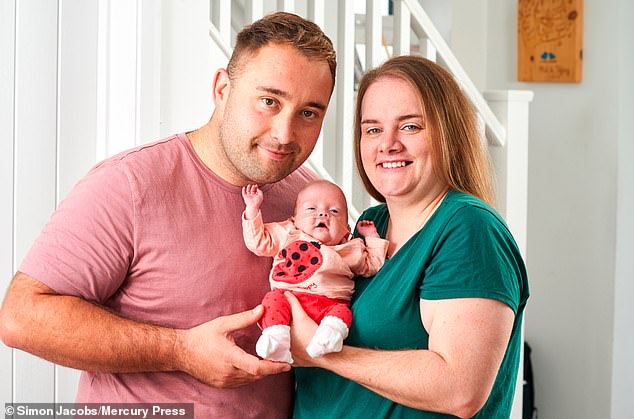 Matthew, who works as a lorry driver, said the couple are ‘on Cloud Nine’ having finally welcomed their daughter home 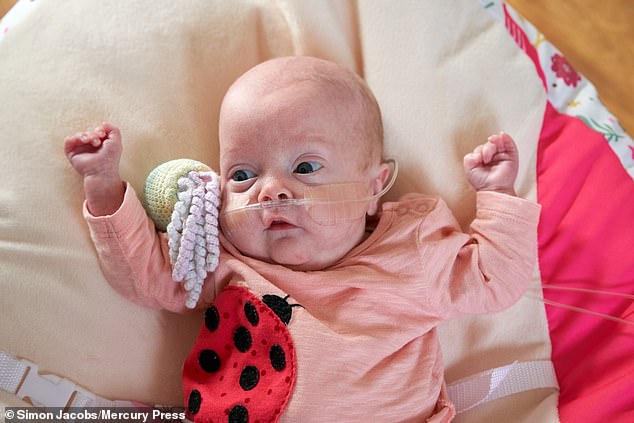 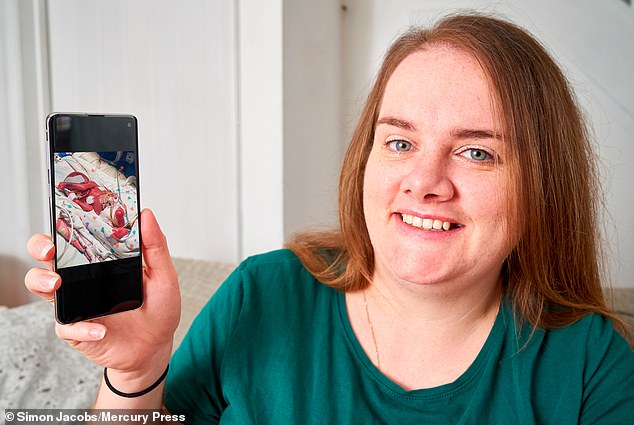 ‘We’re just so thankful to be finally back at home all together, safe.’

The newly reunited family intend to spend the coming weeks getting some well-earned rest and introducing their new daughter to relatives, who were not allowed to visit her while she was in hospital.

Tiffany said: ‘It’s nice that a few friends and family have finally been able to see her.

‘I’m so happy she is back. It was emotionally draining having to leave her. I just want to spend lots of time in the house with her.’

Sepsis, known as the ‘silent killer’, strikes when an infection such as blood poisoning sparks a violent immune response in which the body attacks its own organs.

It is the leading cause of avoidable death, killing at least 44,000 a year, and the Daily Mail has long campaigned for more awareness.

If caught early, the infection can be controlled by antibiotics before the body goes into overdrive – ultimately leading to death within a matter of minutes.

But the early symptoms of sepsis can be easily confused with more mild conditions, meaning it can be difficult to diagnose.

Sepsis has similar symptoms to flu, gastroenteritis and a chest infection.

Symptoms in children are: