A savvy mother has showed off her very minimalist wardrobe after being fed up with doing six loads of her own laundry at a time.

The Australian woman said she now owns just seven outfits to mix and match for winter – one for each day – and five pairs of shoes.

After getting rid of most of her unwanted clothes, she built the ultimate capsule collection for herself, which includes just two dresses, a pair of jeans and one jacket.

After downsizing her wardrobe, the mother-of-four said she noticed her household chores have been a breeze. 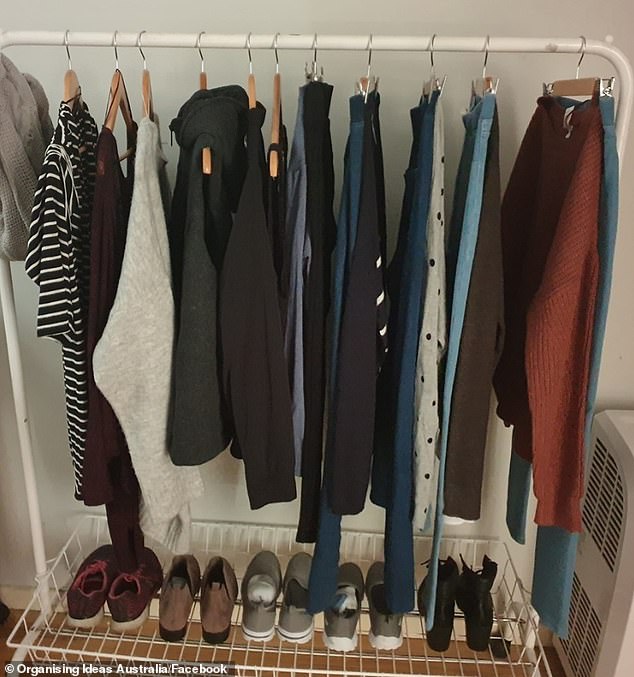 ‘I have seven outfits per season – summer and winter, one for each day, and five pairs of shoes. Each show has a pair of socks in them,’ she said in Organising Ideas Australia Facebook page.

‘I got sick of doing six loads of washing a day, excluding the children’s clothes.

‘I have four children, and as a busy mum it makes life a lot easier. I’ve just had my fourth bub. And to be honest, it makes a hell of a difference with cleaning.’

The mother said she spent more than 12 months getting rid of anything she no longer wore, including designer labels.

‘I started from scratch. I threw everything and bought outfits. That was the only way I was able to get rid of the “one day I might need this” clothes,’ she said.

‘Some of my clothes were hundreds of dollars, but if I didn’t wear them, I gave them either to friends, sold them, or donated to charity.’

She said she keeps her wardrobe simple, filled with just ‘casual’ clothing.

‘The colours I have, are my choice of colours. I know, I’m boring, but I personally don’t get bored. I have never worn colourful clothing. I have two dresses packed away,’ she said.

‘I own barely anything when it comes to appearance, as I don’t wear makeup or jewellery. Except an engraved bangle. But that’s all a personal choice. It comes down to how you personally want to live and what makes you feel content and happy.’ 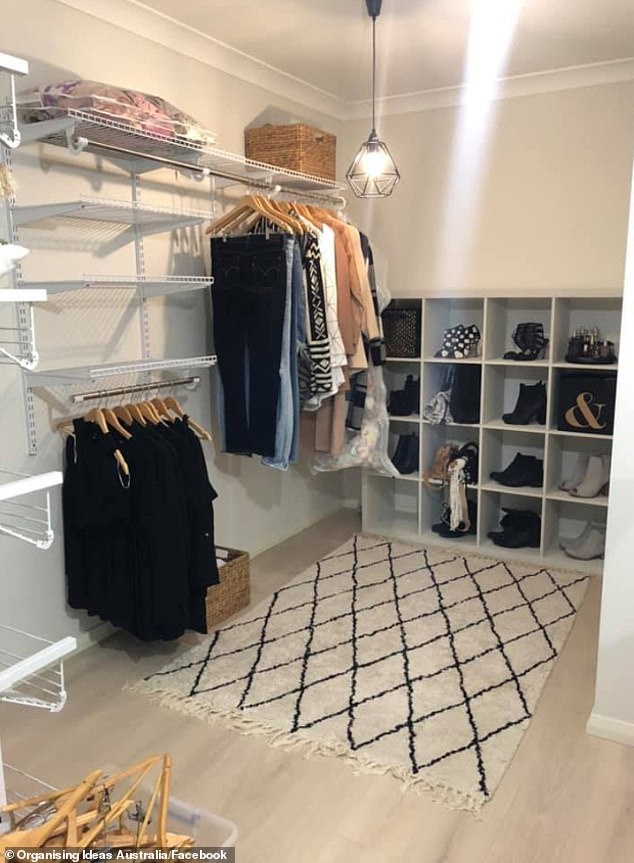 Another minimalist mother also shared a picture of wardrobe after decluttering her space. She now owns just one pyjama set, some pair of jeans, winter coats and even funeral clothes

If you are looking to declutter but don’t know where to start, the mother advised working on one room at a time.

‘You don’t need to get it down to what I have. It’s all about having what I need, rather than what I want,’ she said.

‘Buy what you need, not want – that was the hard part. Never jump from section to section or room to room. Stay in one section until it’s completely done.

‘Be proud of what you wear if it makes you happy. That is our goal in life.’

Another minimalist mother also shared a picture of her wardrobe, which now only includes just enough clothing to wear all year round.

‘Less is definitely more, good quality choices. I started out as culling and donating. Over the course of nine months, I discovered I can live with less,’ she said.

‘I did have good quality clothes, makeup and shoes but the thing is I had such an abundance it became overwhelming and there’s no way I would of been able to wear it all in a lifetime.

‘Now I rarely buy a thing unless it’s for my kids. I ended up having to buy some knickers because I culled them all. I’m still culling. Each time it gets easier and just feels freeing.

‘I’m down to a section of funeral clothes, winter coats, some jeans, one cube of undies and bras, one pyjama set and a space for maternity clothes just in case.’

Many women were amazed by the minimalism, with some saying they felt inspired to declutter their own wardrobes.