The Queen’s granddaughter Zara Tindall has been spotted in The Crown for the first time.

An unnamed child actress playing the then-nine-year-old royal appears briefly in the last episode of the fourth season of the Netflix show, which was released last weekend.

Netflix confirmed to FEMAIL that Zara can be seen wearing a purple dress and sitting cross-legged alongside other royal children, as she poses for a Christmas photograph at Sandringham in 1990 in the final episode, which is entitled War.

It comes as former rugby ace Mike, 42, who lives with the equestrian at Princess Anne‘s Gatcombe estate, revealed he is currently ‘watching series three of The Crown’ and said he is ‘quite intrigued’ to see where the programme creators ‘go with it’. 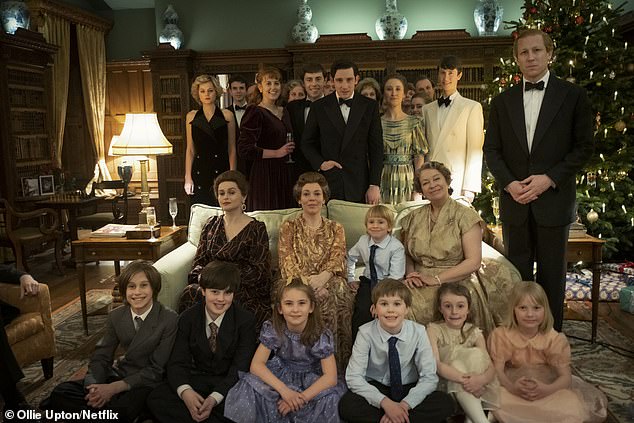 Mike’s mother-in-law Anne features heavily in the third and fourth season of the programme while a young version his wife Zara also makes an appearance in the final episode of the latest series during a Christmas scene.

An unnamed child actress portraying the equestrian can be seen sitting cross-legged on the ground at the front of a group of royals and wearing a purple gown.

Netflix has confirmed to FEMAIL the actor is playing Zara, while she is sitting alongside actors portraying brother Peter and the children of the Duke of Gloucester.

As well as cousins Prince William and Prince Harry, Alexander, Rose and Davina Windsor also make an appearance in the scene. 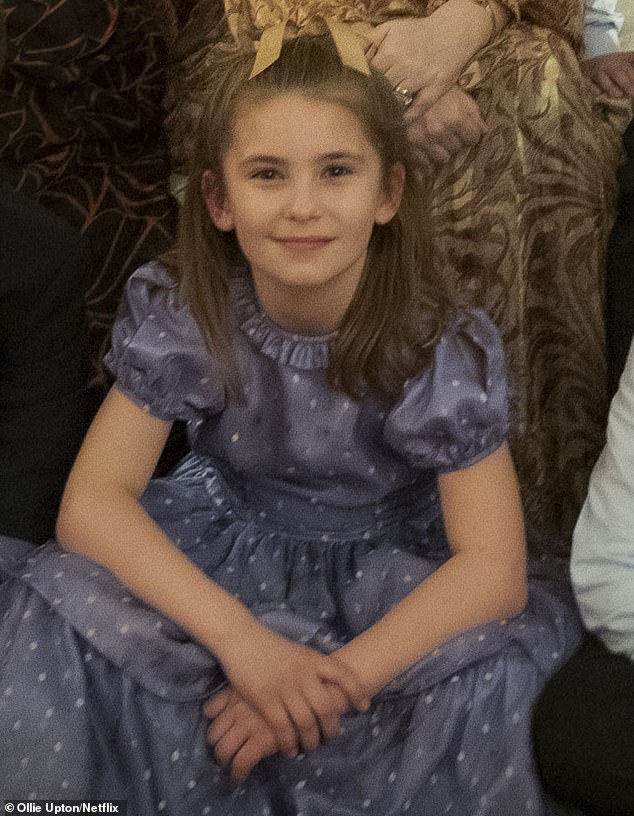 The final episode of The Crown season 4 sees a young actress appear briefly as a young Zara Tindall. She is seen in a scene with her brother Peter Philips, and cousins, including Prince William and Harry 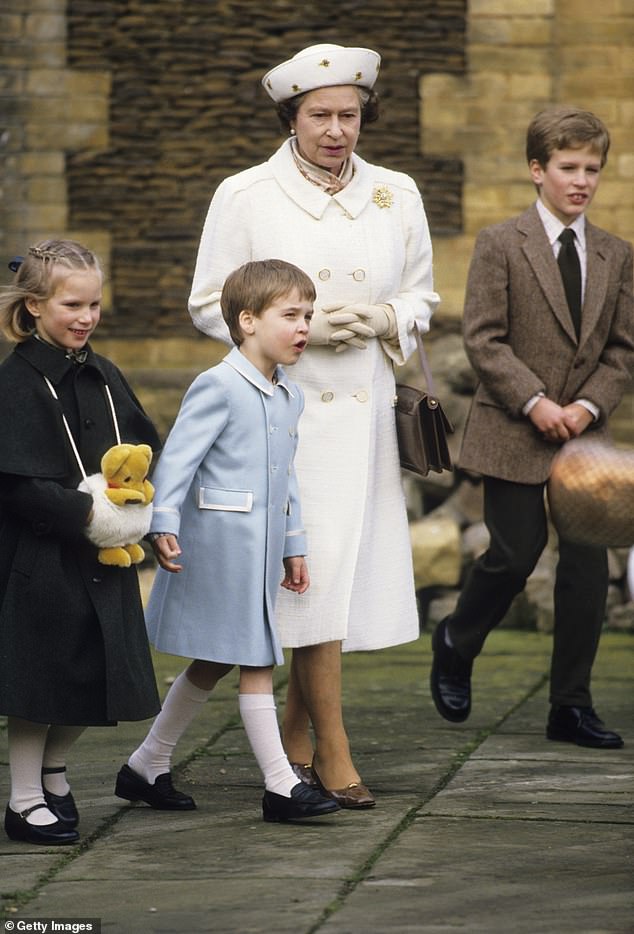 Zara, pictured with Prince William with their grandmother, The Queen, at Sandringham

Speaking on The Good, The Bad & The Rugby podcast, Mike said he ‘needed to catch up’ before watching the latest series, which was released on Sunday, saying: ‘I’m quite intrigued to see where they go with it because obviously it’s an era that people are fascinated with.’

Host Alex Payne asked Mike: ‘Talking of the telly box, the new series of The Crown started, are we talking about that? How’s that going behind closed doors?’

Alex interjected:  ‘It’s getting harder to watch the more modern it gets because you can just sort of see people’s reactions to it, kind of thing.’ 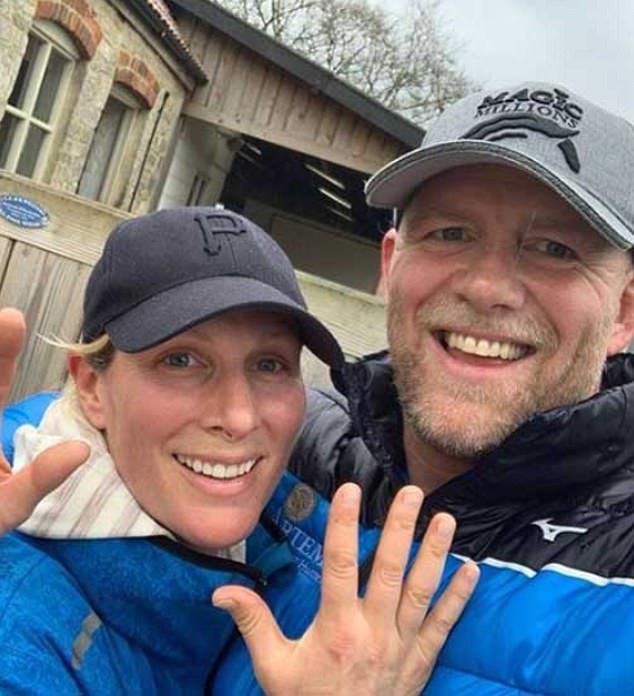 The news comes as Mike Tindall, who is married to Zara, revealed he is currently ‘watching series three of The Crown’ and says he is ‘quite intrigued’ to see where the programme creators ‘go with it’

Mike added: ‘Yeah, well it’s getting to more things that people know about, isn’t it, and have opinions about so, that’s where it gets difficult.’

But he continued: ‘Remember everyone, it is a drama so it’s going to be made into a bit of a drama.’

The presenters went on to tease Mike about a potential portrayal in The Crown, with James Haskell saying: ‘When’s the best bit when they’re going to have some bloke with a nose round here, and ears like that coming in like… “Hi guys, I’m Tindall.” 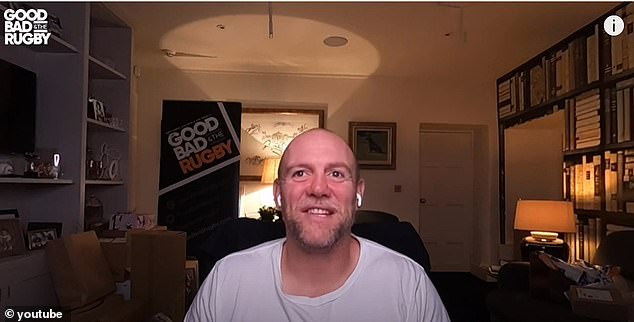 Speaking from the home he shares with Zara on Princess Anne’s Gatcombe Park estate, the former rugby ace made the revelations during his The Good, The Bad & The Rugby podcast

‘Steaming in the background like that, “Alright Queen?” High-fiving and drunk. And they just have to look to the side, like Charles going [shakes his head].’

Mike joked he wanted a Hollywood actor to play him, saying: ‘I’m looking forward to Jason Statham rocking in, looking cool as [expletive], with a northern accent.’

He continued to joke that he might not be in the series until a ‘season 62’, adding: ‘There is a long way to go yet.’

Alex continued and made a rare comment about Mike and Zara’s wedding in 2011, joking: ‘Do you think they’ll be a special Tindall wedding?’

The third series of the programme saw the introduction of Mike’s mother-in-law Princess Anne, played by Erin Doherty, who also has a starring role in the fourth season.

When The Crown was first announced, it was thought the series would run for six series, spanning six decades, and cover The Royal Family’s history up to 2003.

It will now air for six series after originally being confirmed to end with season five.

Since the release of the fourth season this week, royal commentators have lined up to criticise the show, including Ingrid Seward who called it ‘pretty inaccurate’, Dickie Arbiter who said ‘some of the actions are fiction’ and Sally Beddell Smith who said ‘the level of invention has been growing’.

Tom Quinn said parts of the show were ‘total nonsense’, although Paul Burrell was full of praise, saying it was a ‘fair and accurate dramatisation of what happened’.

Inaccuracies in the drama have also been slammed, including that Charles saw Lord Mountbatten as more of a father-figure than Prince Philip, and that Margaret Thatcher told the Queen she thought women were incapable of holding high office. 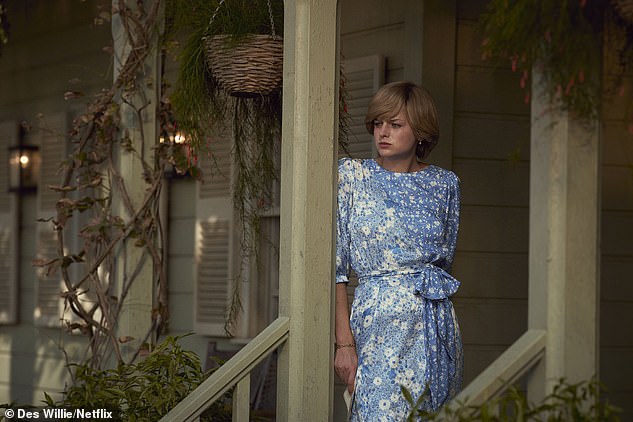 The new series of the hit programme has been widely panned by royal critics, who have criticised it as overly dramatised

Friends of Prince Charles launched a blistering attack on the show over the weekend, accusing producers of the hit Netflix drama of ‘trolling on a Hollywood budget’.

Some of the Prince’s closest confidantes have accused the streaming giant of exploiting the Royal Family’s pain for financial gain and raged that ‘fiction is presented as fact’ in its twisted version of events.

Meanwhile royal experts also claimed Prince Harry has stepped into a ‘bear trap’ with his £75million Netflix deal amid fierce criticism of The Crown’s portrayal of his parents.

The Duke of Sussex is ‘unlikely to see a clash’ between the ‘deeply intrusive’ drama and the deal he and wife Meghan made, commentators said as they pointed out it portrayed his parents Charles as a ‘wimp’ and ‘brutal’ and Diana as ‘deeply stressed’.

Richard Fitzwilliams said Harry may even agree with the ‘derisory portrayal of the Royal Family as a rather sinister, uncaring and often cruel institution’, while author Penny Junor said the 36-year-old was in a ‘very awkward situation right now’.