Meghan Markle’s political activism ‘won’t end after the US election’ because she feels ‘encouraging people to get involved’ is ‘important’, her spokesperson has revealed.

The Duke, 36, and Duchess of Sussex, 39, have faced furious backlash over the last few months by weighing in on the US election – breaking with centuries-old tradition that calls for members of the Royal Family to remain politically neutral.

A spokesperson for the Sussexes said the comments were ‘not time specific’, telling Insider: ‘Part of being an active member of society is to take part in the democratic process. So encouraging people to get involved in politics is something that is important.’

The spokesperson explained that while the Duke and Duchess’ comments had been made ‘at a very important part of the election cycle’, they would continue to be political active in future months.

It comes as sources revealed Meghan ‘voted early by mail in the 2020 presidential election‘ and would be ‘eagerly awaiting’ the results at home in the $14.5 million Santa Barbara mansion she shares with Prince Harry. 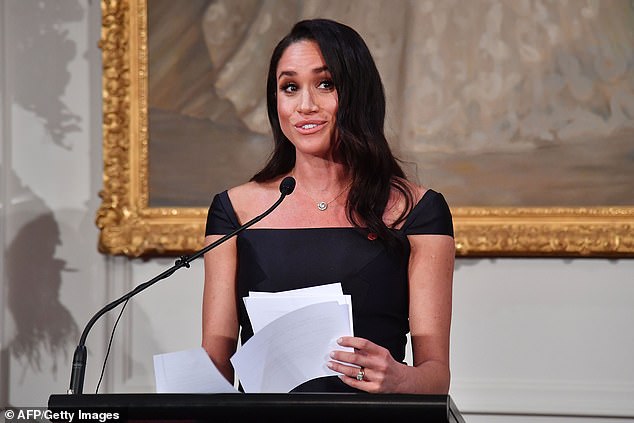 Meghan Markle’s, 39, political activism ‘won’t end after the US election’ because she feels ‘encouraging people to get involved’ is ‘important’, her spokesperson has revealed

While Harry is unable to take part in the election because he is not a US citizen, Meghan couldn’t wait to cast her vote, which she did via mail-in ballot, a source told the New York Post.

That same source also claimed that Meghan would not have let anything stop her from voting in this election, insisting that she’d have cast her ballot even if she and Harry had still been living in the UK.

Harry may not be able to actually vote in the election, but one source close to the couple, who re-located to California with their son Archie earlier this year, said that both he and Meghan have taken a ‘keen interest’ in the events leading up to it. 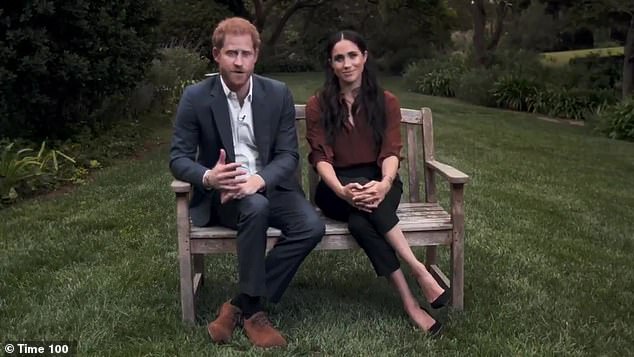 The spokesperson said that while the Duke and Duchess’ comments had been made ‘at a very important part of the election cycle’, they will continue to be political active in future months

Speaking out: Meghan has become very vocal about politics since the couple stepped down as senior royals at the start of the year, taking part in numerous virtual summits

The Duchess first confirmed her plan to vote in the election back in August during an interview with Marie Claire.

Meghan, who was born in Los Angeles and is likely to have voted in the state of California, spoke about the importance of voting, saying: ‘I know what it’s like to have a voice, and also what it’s like to feel voiceless. I also know that so many men and women have put their lives on the line for us to be heard.

‘And that opportunity, that fundamental right, is in our ability to exercise our right to vote and to make all of our voices heard.’

Since then, Meghan has spoken about the election and the importance of voting at great length, while her political opinions have also been echoed by her husband in a move that sparked fury among some, who criticized the British royal for weighing in on US politics.

In September, the couple recorded a video message for Times 100 urging Americans to vote, while hinting that they both support Democrat Joe Biden.

Sources close to the pair denied that they were publicly throwing their weight behind any one candidate, however royal insiders the world over voiced concern about their decision to speak about politics at all – particularly because the Queen and her family are expected to remain politically neutral at all times. 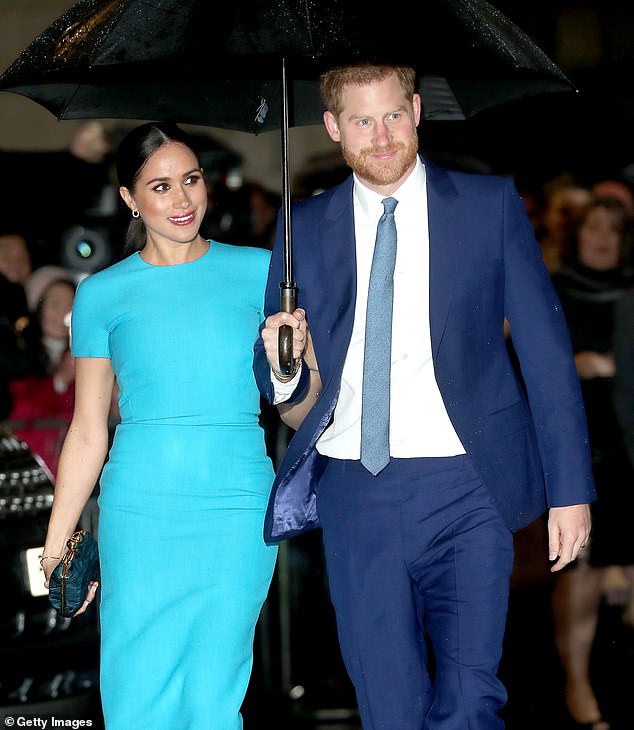 Taking cover: Another source told People that Meghan and Harry are planning to watch the election results at home in their $14.5 million Santa Barbara mansion

Buckingham Palace also distanced itself from Harry and Meghan’s remarks in a stinging response by saying the Duke is ‘not a working member of the royal family’ and describing his comments as being ‘made in a personal capacity’.

Still, the couple’s pointed political comments sparked outrage, and royal experts told DailyMail.com that the couple should give up their titles and sever their links to the monarchy for good if they want to comment on US politics, while insiders told the Times that palace aides would be concerned about their intervention.

Days before the Time 100 video was released, activist and Democrat campaigner Gloria Steinem revealed that Meghan had been ‘cold-calling US voters’, explaining that she and the Duchess of Sussex reached out to people together in order to encourage them to take part in the election process. 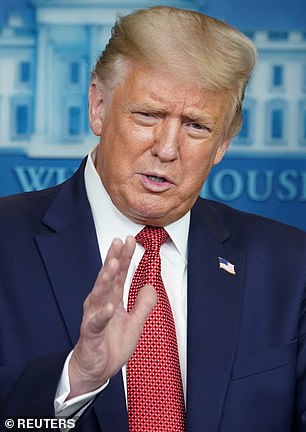 Criticism: Before marrying Harry, Meghan made clear her dislike for President Trump, branding him ‘misogynistic’ and ‘divisive’ after he won the election

‘She came home to vote. The first thing we did, and why she came to see me, was we sat at the dining room table where I am right now and we cold-called voters,’ Gloria, 86, told Access Hollywood.

Meghan’s increasingly public stance on politics will come as no surprise to those closest to her – particularly after it was revealed by a royal source in January that she was aiming to become more ‘politically engaged’ after she and Prince Harry quit their roles as senior royals at the start of the year.

At the time, an insider told the Daily Mail that Meghan had grown ‘frustrated’ by the fact that she was not able to be actively involved in politics while she was a senior member of the monarchy, and that she wanted to ‘take advantage’ of the freedom to share her opinions with the world.

Before marrying Prince Harry, the Duchess was incredibly outspoken about her dislike of President Donald Trump, branding him ‘misogynistic’ and ‘divisive’ during a talk appearance in 2016, shortly after he had won the election.