Meghan Markle sent her fans wild after channeling her Suits character Rachel Zane for an appearance with an online poetry class.

The Duke and Duchess of Sussex, who are currently living in her $14million mansion in California having stepped back from her royal duties last year,  joined a digital event organised by poetry group Get Lit in honour of Black History Month.

Fans quickly took to Twitter to compare Meghan’s casual look, with an unbuttoned blue shirt and flowing hair, to her character in the US legal drama who she portrayed for seven years prior to marriny Prince Harry. 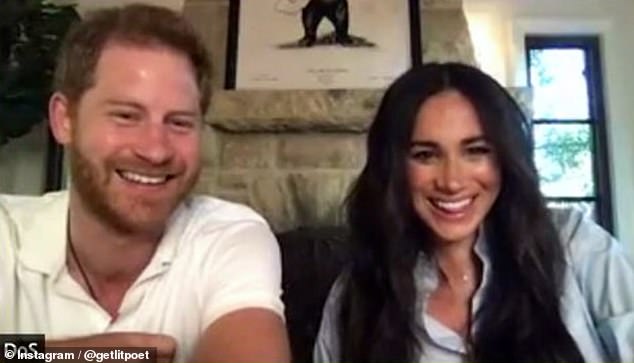 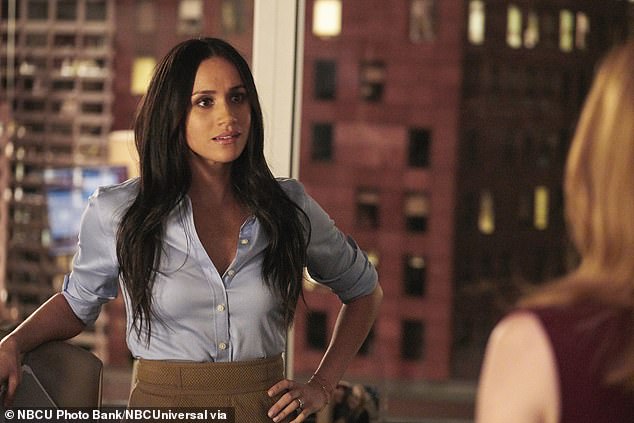 Meghan, 39, starred as paralegal Rachel Zane in Suits (pictured) from 2010 until her last episode was aired in April 2018, a month before her wedding at Windsor Castle

‘Big Rachel Zane energy with this look and I’m here for it’, wrote one user.

‘The throwback! I love it’, said another.

Meghan, 39, starred as paralegal Rachel Zane in Suits from 2010 until her last episode was aired in April 2018, a month before her wedding at Windsor Castle.

Following her exit from the show Meghan remained friendly with a posee of her former co-stars attending her wedding to Prince Harry, including Gabriel Macht, Abigail Spencer, Sarah Rafferty, and Patrick J Adams.

Fans were also quick to comment on Meghan’s flowing hair with one writing: ‘Her hair is so thick and I’m loving it!’

Another said: ‘Meghan’s hair is on super-drive. I am having major #HairEnvy. Sigh!’

Meghan has donned a more laid back look since giving up royal life, ditching the glitz and glamour of her UK wardrobe in favour of her former casual style after moving back to her hometown LA.

Meghan, pictured in her California home last year, has donned a more laid back look since giving up royal life and moving to her hometown of LA

‘It’s almost as though the clothes she sported while in the UK weren’t really letting her true personality come through.

‘It’s as though the Duchess was wearing a costume rather than outfits that showcase her style. Now, we’re seeing the real Meghan. Her clothes are much more relaxed and in turn, so is her body language.’

In a screenshot shared by Get Lit on Instagram, Prince Harry and Meghan are seen beaming with joy as they introduce themselves to aspiring poets aged between 13 and 19.

The couple were recommended a Joni Mitchell song by one of the young poets, with the group’s leader Mason Granger commenting on Instagram: ‘They talked about poetry, Meghan mentioned Joni Mitchell and one of them gave her a song recommendation, it was cool.’ 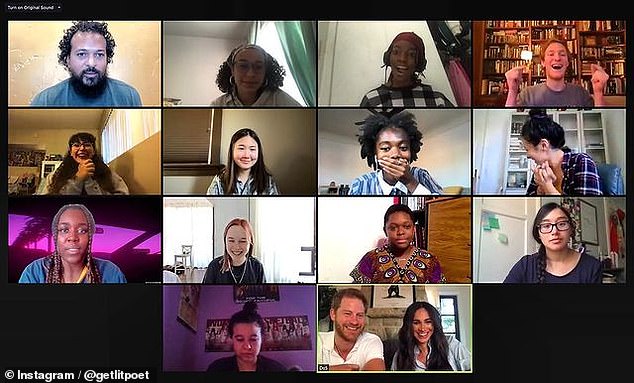 Harry, 36, and his wife, 39, joined the online class from their $14.5 million home in Montecito, California

Get Lit Poetry shared a screenshot from the class on Instagram, along with a gushing caption in which it was revealed Meghan ‘shared some of her favorite poetry lines’ in the class

Meanwhile Diane Luby Lane, Get Lit’s founder and executive director, told HuffPost: ‘They took music suggestions from the Poets and said it would be their dinner playlist.’

Sharing the news of the couple’s appearance on Instagram, the Get Lit poet page commented: ‘We’ve saved the best for last! Guess who surprised our poetry class this weekend?!’

‘It was the best weekend EVER! Prince Harry and Meghan, The Duke and Duchess of Sussex, were magic and kind and interested in poetry!’ the caption continued.

‘The Duchess even shared some of her favorite poetry lines. We are so grateful for their visit in honor of Black History Month. It goes down as most epic experience in Get Lit history!’