An Arizona woman who was caught on camera berating a gym employee over their face mask requirement is being called ‘Maxi Pad Mask Karen’ for the scrunched-up way she insisted on wearing her face mask.

The fitness center confrontation was interrupted by fellow gym member Laura Ames, who was not impressed by how the unidentified woman and her boyfriend were speaking to staff — and eventually confronted them about it.

In the video, the woman is wearing her mask twisted in a way that doesn’t properly cover her face — and spends several minutes berating Esporta staff about it, insisting that there is no rule that says she had to wear the mask properly. 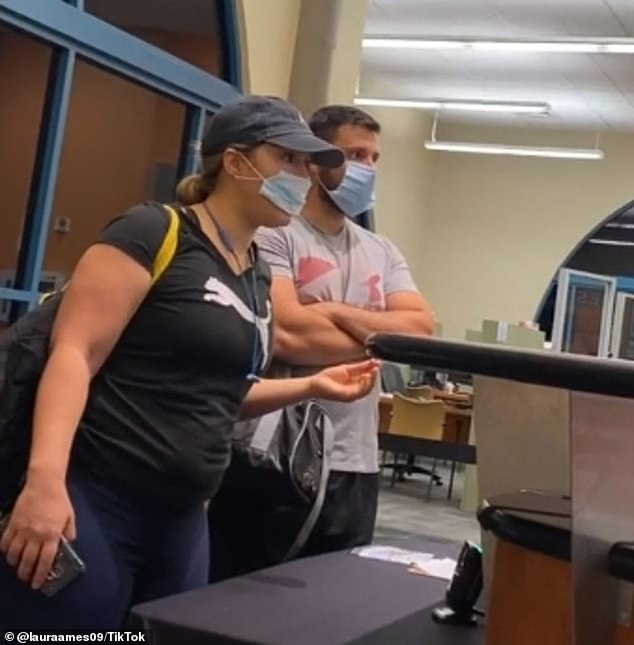 Called out: An Arizona woman who was caught on camera berating a gym employee over their face mask requirement is being called ‘Maxi Pad Mask Karen’ 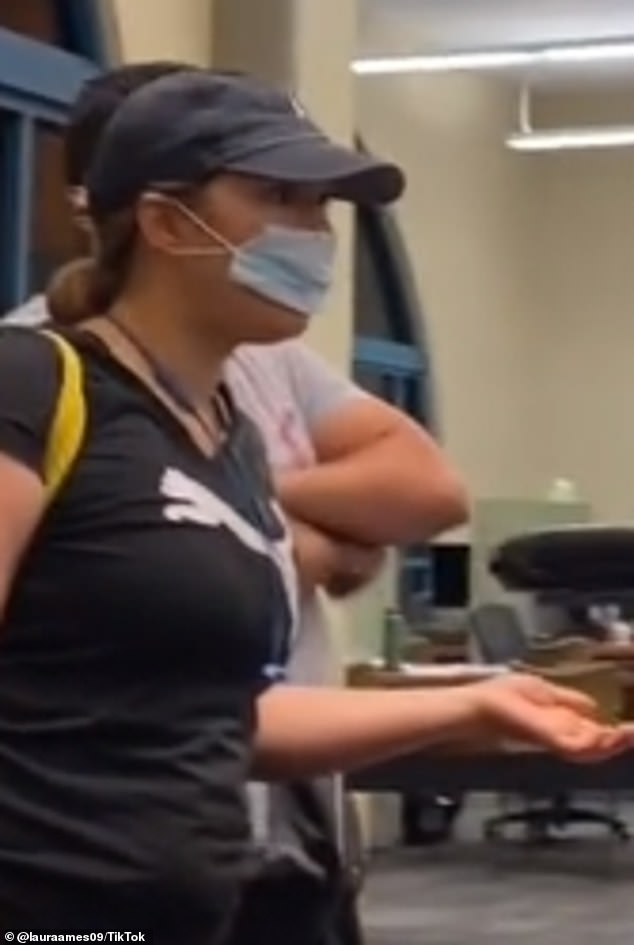 The rules: She was recorded arguing loudly with gym employees who told her she needed to wear her mask properly to cover her mouth and nose

The Arizona Department of Health Services has issued a list of requirements for gym reopenings, which includes checking guests’ temperatures and mandating that all wear masks.

Laura explained that when this woman entered the gym, though, she was not wearing her mask properly or effectively, instead bunching it up above her mouth.

‘It was all scrunched up, and then [she] slowly started stretching it out as she was told that she had to wear it properly,’ Laura said.

But while she deigned to adjust the mask slightly, Maxi Pad Mask Karen quickly began arguing about whether she needed to wear the mask to cover her mouth and nose.

‘She was calling the employee a dumb b**** and other inappropriate names before the video started,’ Laura said.

As the video begins, the woman is already getting testy with a female staff member.

‘I have my face covered, don’t I?’ the female staff member replies. 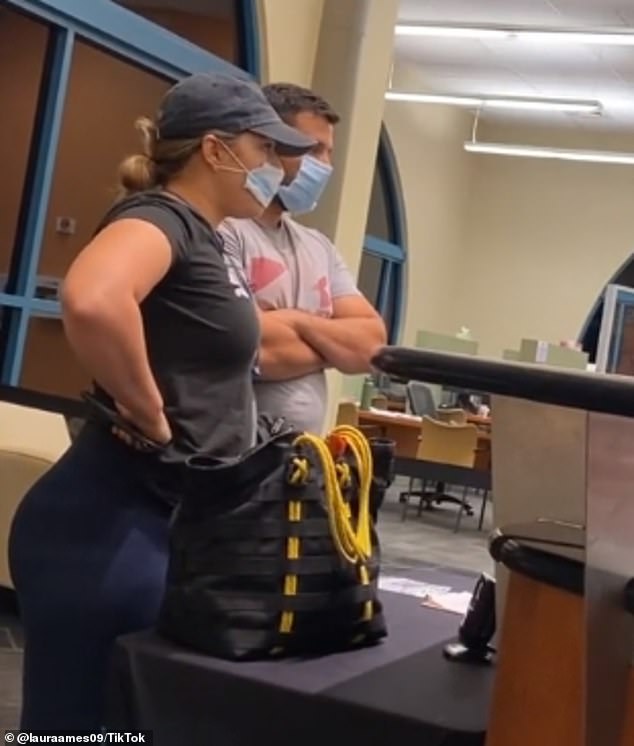 Doesn’t work that way, hun! The person who recorded the video said that when the woman walked in, her mask was scrunched up above her mouth 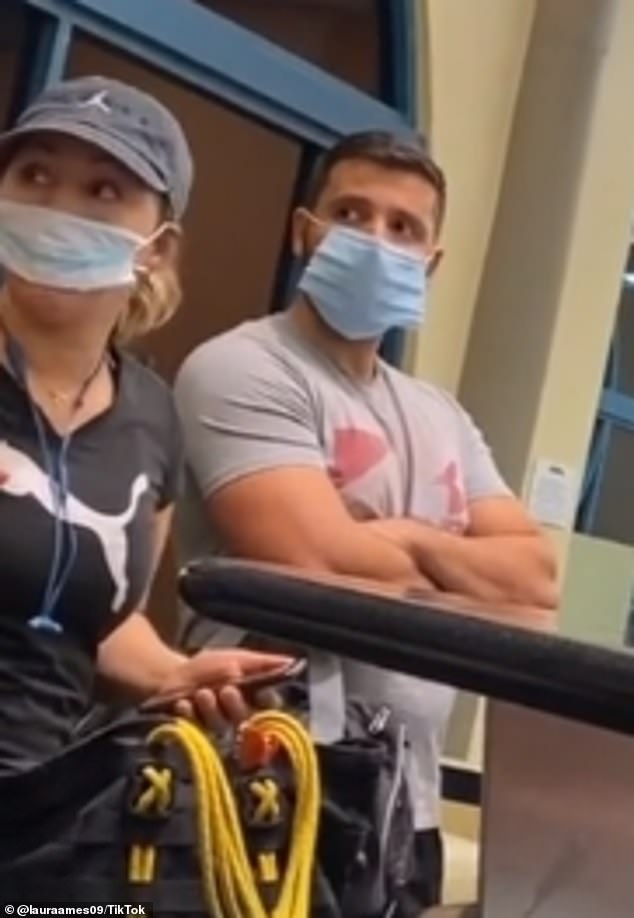 Ready to fight: The woman keeps berating the staff, with help from her boyfriend, before another gym-goer tells her to stop and follow the rules

A male staff member then explains that the mask rule is ‘just something that we need to do’ to adhere to as part of the ‘state mandate’ for exercising in a gym.

Here, the woman’s boyfriend seems to get confused, arguing that the mandate ‘doesn’t say anything about a gym’ as he gestures to a small sign on the counter.

‘Yeah, it doesn’t say anything about a gym,’ says the woman, also reading the sign. ‘It says mouth and nose both covered.’

The sign appears to have been a short notice on just the gym face mask rule, not the entire state mandate on all safety precautions — which is several points long — printed verbatim.

Before this can be explained to the couple, the argument is interrupted by Laura, who stops to intervene.

‘Okay I’m just going to interrupt because this is really annoying. You guys need to just follow the rules,’ she tells them. 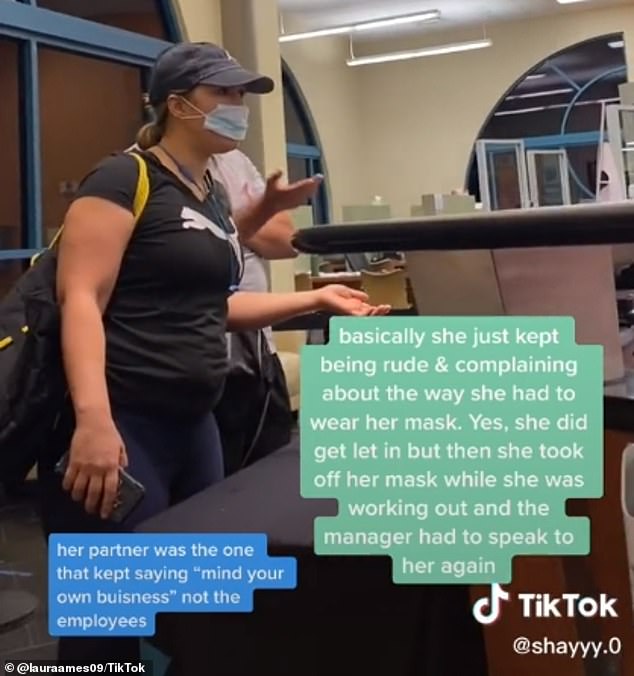 Whatever she wants: Though the staff eventually let Maxi Pad Mask Karen in, ‘she took off her mask while she was working out and the manager had to speak to her again’

Maxi Pad Mask Karen fires back that Laura should ‘mind your own damn business,’ to which Laura says that she is being disrespectful.

In a follow-up video, Maxi Pad Mask Karen turns back to staff and say, ‘I don’t know what her problem is, but this is unacceptable.’

‘What’s the point of covering your chin?’ the man argues.

The female staff member replies, ‘It needs to be under your mouth.’

‘Masks move!’ Maxi Pad Mask Karen yells. ‘This is going by the CDC recommendation as well as Esporta’s rules so I don’t know what the f*** you’re talking about.’ 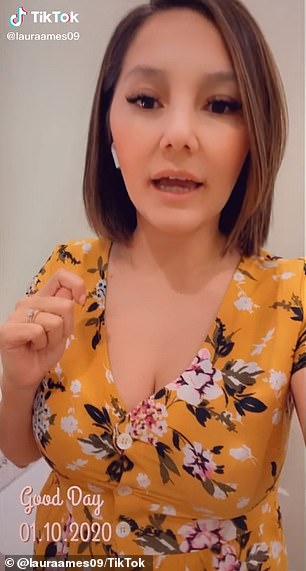 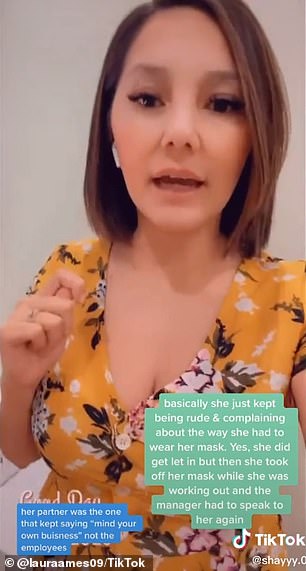 Stepping in: Laura Ames, the gym-goer who interrupted Maxi Pad Mask Karen’s rant, said she was yelling profanities at the staff before the video began

The videos were posted by Laura’s sister, Shay Sanchez, who offered a few more details.

‘Basically, she just kept being rude & complaining about the way she had to wear her mask,’ she wrote.

Though the staff eventually let Maxi Pad Mask Karen in, she continued to be a problem while exercising.

‘She took off her mask while she was working out and the manager had to speak to her again,’ Shay wrote.

The video was uploaded to TikTok a week ago, and has been viewed 4.4 million times and counting.

It has also been shared on Reddit, where commenters are slamming the woman who made a scene ‘with her maxi pad face mask,’ prompting the Daily Dot to dub her Maxi Pad Mask Karen.