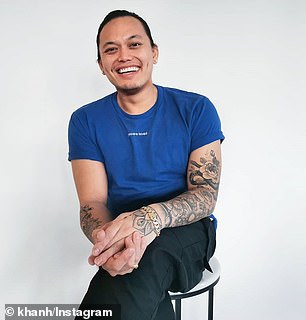 The secret to perfect pork crackling is lightly piercing skin and roasting meat in a double layer of baking paper and tinfoil, MasterChef Australia‘s Khanh Ong has revealed.

The 27-year-old fan favourite, who first appeared on MasterChef in 2018, was eliminated from the ‘Back to Win’ series on Sunday June 14 after losing a fine dining challenge against Emelia, Laura and Reynold.

But with a combined following of 126,500 on Instagram and YouTube and a cookbook slated for release on July 14, the lovable chef’s future looks brighter than ever.

In a recent video for his online cookery channel, Khanh said the trick to succulent pork is to start with a ‘uniformly’ shaped cut, avoiding lopsided pieces where one side is thicker than the other to ensure the flesh cooks evenly.

And while recipes typically advise leaving pork to dry overnight before cooking, Khanh said it’s not necessary and only buys meat on the day he plans to eat it. 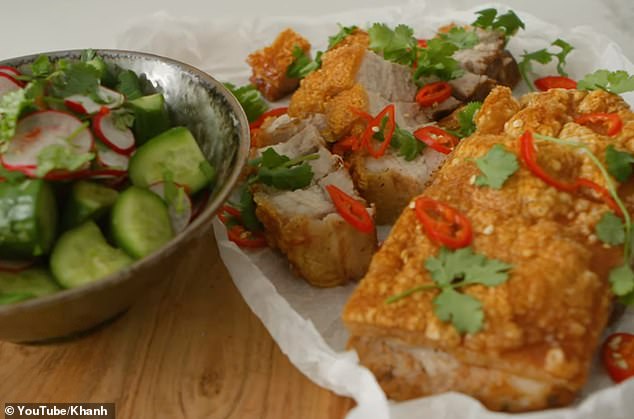 Khanh’s crispy pork belly, made with five-spice seasoning and cooked at 180 degrees Celsius for roughly 80 minutes 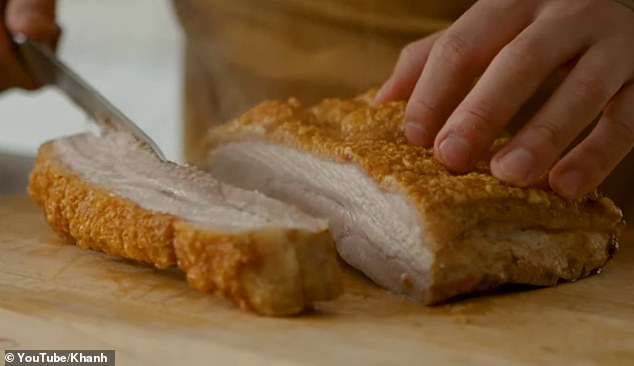 The 27-year-old fan favourite’s techniques serve up this perfect cut of pork with a thick, crispy outside and a tender, juicy inside

How to season the meat

Instead of seasoning the flesh of the pork with lashings of salt, Khanh uses the healthier – but equally tasty – technique of ‘scoring’ holes in the skin with a sharp knife, which allows naturally salty juices to pour out from the centre.

He said it’s important to pierce lightly, stopping short of the fat to prevent too much juice escaping through the skin.

He adds flavour to the base by coating it with an Asian five-spice powder, made from cinnamon, fennel seeds, star anise, peppercorn and cloves.

How to make the perfect crackling

Once seasoned, Khanh covers the top of the skin with one and a half tablespoons of salt which draws moisture out of the meat as it cooks to form golden, crispy crackling.

‘You want the whole thing to be covered,’ he said.

It’s crucial to rub the salt thoroughly into the skin, according to Khanh, to prevent the crackling from developing a chewy rather than crispy texture in the oven.

* Coat the base of the meat in five-spice powder, made from cinnamon, fennel seeds, star anise, peppercorn and cloves 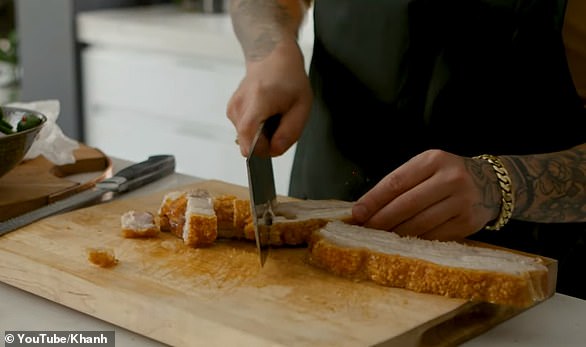 Khanh’s perfect pork belly crackling, crispy on the outside and tender on the inside 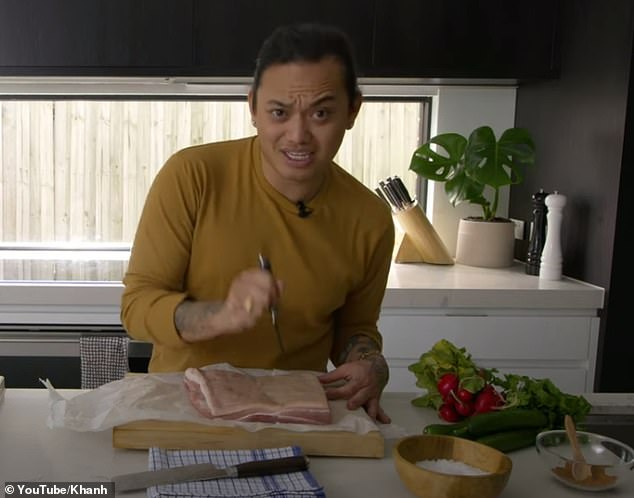 Khanh lightly pierces the skin, taking care not to cut into the fat which causes juices to escape during cooking

How to cook the meat

In preparation for cooking, Khanh lays a sheet of baking paper on top of a sheet of tinfoil and folds both tightly around the sides of the pork, leaving the top uncovered.

‘Usually I find the fat gets caught in the foil and then the pork gets stuck to the foil, but it doesn’t happen when you have a sheet of baking paper as well,’ he said.

For the crispiest crackling, he cranks the temperature to a searing 240 degrees Celsius in the final few minutes of cooking.

Can you guess the well-known sayings from this picture quiz?