Most of us think that successful people never have doubts about their abilities and have absolutely no fear of failure.

The novelist admitted that although she has some new ideas for her next novel, she was held back by fears she wasn’t ‘talented or brave enough’.

However her Instagram post went on to say that she will challenge herself every day to write the book – despite how daunting the prospect seemed.

Fans were quick to praise the writer for her honesty, with one insisting she’s ‘dead right’ and has ‘pulled off wondrous stuff in the past’. 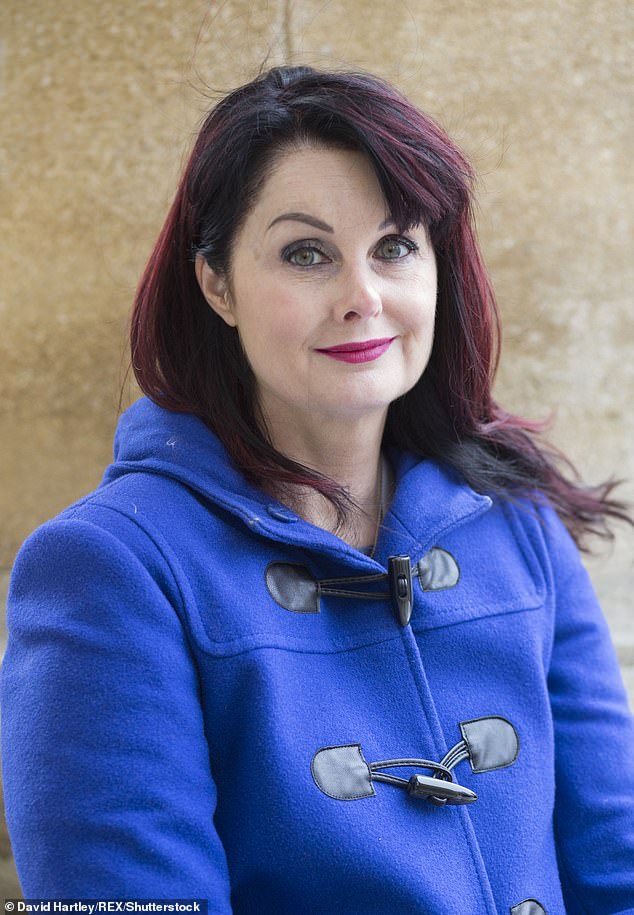 Marian Keyes, 56, revealed that she’s been facing some self-doubt while getting started on her latest novel 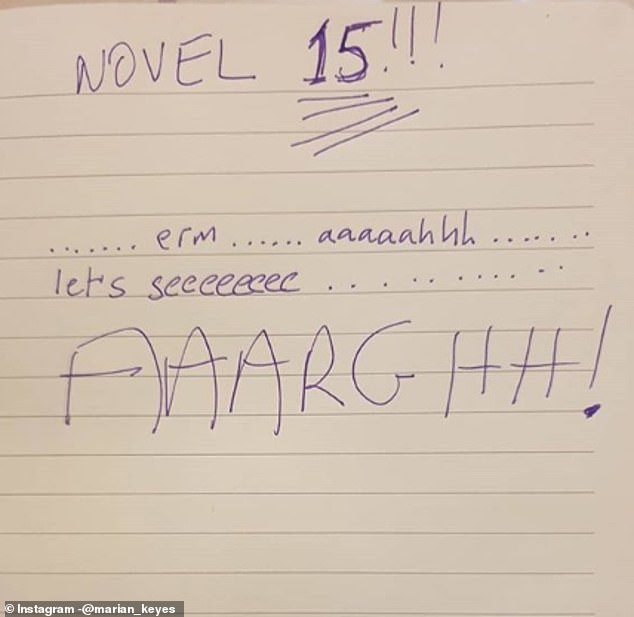 The novelist admitted that although she has some new ‘daunting’ ideas, she was held back by fears she wasn’t ‘talented or brave enough’ 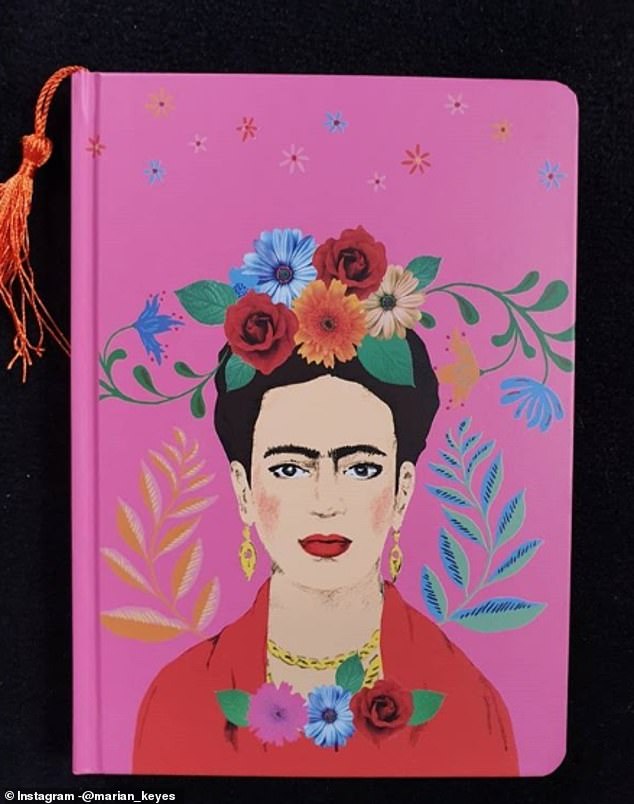 She was inspired by a new notebook gifted to her by a friend and decided to make a start, insisting that the only way to avoid failure is by ‘playing it safe’

She wrote: ‘This BEAUTIFUL Frida notebook was given to me on Wednesday by my beloved friend Roisin Ingle, for ‘ideas for my new book’. So! I’ve made a start!

‘I’ve a couple of ideas knocking around but with both of them I’m frightened that I’m not talented or brave enough to carry them off.’

She went on to explain that her post was not a ‘plea for praise’ but an opportunity to discuss facing your perceived ‘limitations’ with her fans.

She said:  ‘This is NOT a transparent plea for praise! I simply want to talk about limitations.No-one can know their limitations until they hit them.

‘At that point they might be months deep in a project, 93% of the way up a mountain, 12 years into a marriage. And THEN what happens?

‘A salvage operation is what happens.SOMETIMES a bodge job can pull things together, making the outcome acceptable if not ideal. 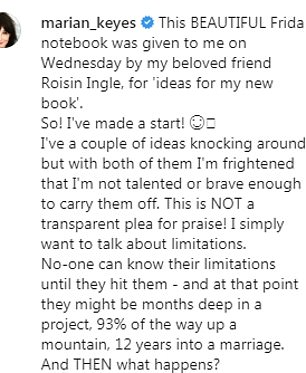 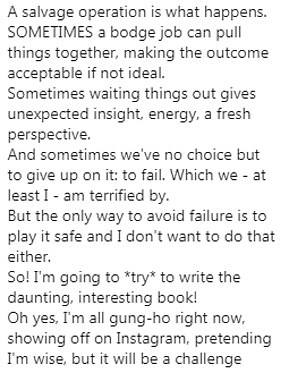 The candid post outlined her struggle to start writing, and she insisted  her post was not a ‘plea for praise’ but an opportunity to discuss facing your perceived ‘limitations’ with her fans 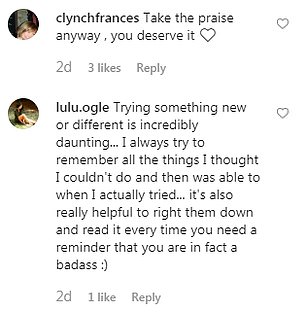 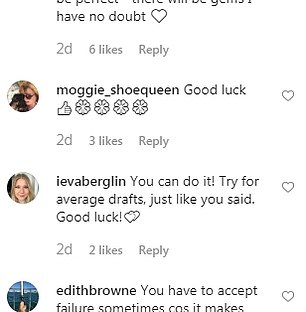 Fans were quick to praise the writer for her honesty, taking to Instagram to share hoards of supportive comments

‘Sometimes waiting things out gives unexpected insight, energy, a fresh perspective. And sometimes we’ve no choice but to give up on it: to fail. Which we – at least I – am terrified by.

‘But the only way to avoid failure is to play it safe and I don’t want to do that either. So! I’m going to *try* to write the daunting, interesting book!

‘Oh yes, I’m all gung-ho right now, showing off on Instagram, pretending I’m wise, but it will be a challenge every new day. We’ll see what unfolds.’

Fans loved her honesty – with one saying: ‘You are dead right about not knowing your limitations until you hit them, and that is a good thing for us all to remember.

‘But also: you have pulled off wondrous stuff in the past. This Charming Man is SO ambitious in what it does narratively and you did it gorgeously.

‘I am sending you ALL the good vibes for this new project, shiny lady.’

Another commented: ‘You have to accept failure sometimes cos it makes you progress. And everybody knows what you are capable of.’

A third said: ‘Trying something new or different is incredibly daunting… I always try to remember all the things I thought I couldn’t do and then was able to when I actually tried. 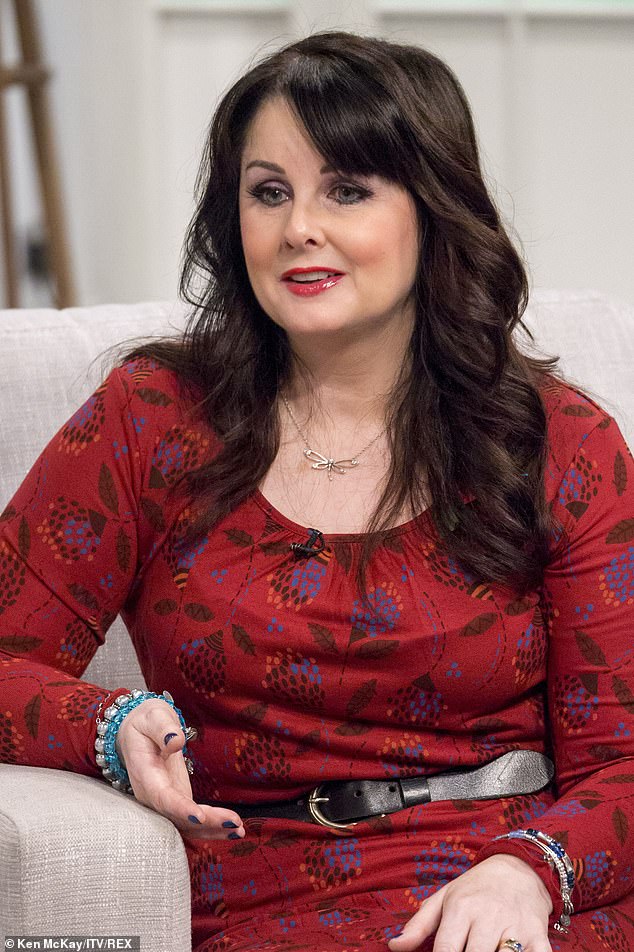 The writer revealed that although she’s ‘terrified’ to fail, she has started writing her new book

‘It’s also really helpful to right them down and read it every time you need a reminder that you are in fact a badass.’

Another added: ‘I love that you share your struggle. Our common humanity of fear and pain.

‘Also I love your storytelling, the thoughts that I have felt, mirrored in your characters, making sense of my own. Keep going. It won’t be perfect – there will be gems I have no doubt.’

She’s not the first successful person in the media to share their failings or self doubt. Last year journalist Elizabeth Day started up a podcast called How to Fail, on which she has interviewed successful writers, actors and mental health activists about how they’ve used their failures to learn about themselves and continue to shine.

She told the Guardian last year: ‘The idea was for me to do eight one-to-one interviews over eight weeks with highly successful people about what failure had taught them.

‘The rise of social media means we now live in an age of positive curation, where Instagram feeds and Pinterest mood boards are designed to give the most glowing impression of our lives. In this context, failure doesn’t get much airplay.

‘But, I thought, wouldn’t it be refreshing if we stripped back the carefully crafted layers of our supposedly perfect selves, and revealed ourselves to be vulnerable?’

Candid snaps of Marilyn Monroe are tipped to fetch $9,000 at auction

Boy genius, four, becomes a member of Mensa – and he already knows all 50 American states