A designer label has fans scratching their heads after sharing a creepy optical illusion image in which a woman’s calf looks like it is cut in half.

On Sunday, Mansur Gavriel posted a photo of a model wearing a pair of its white lambskin ballerina flats and a cream dress on Instagram. Her frock perfectly matches the background, causing quite a bit of confusion in the comments section.

The dress is simply covering a part of her legs while she is kneeling, but the fabric blends into the background and makes it look like she has tiny bone-thin calves. 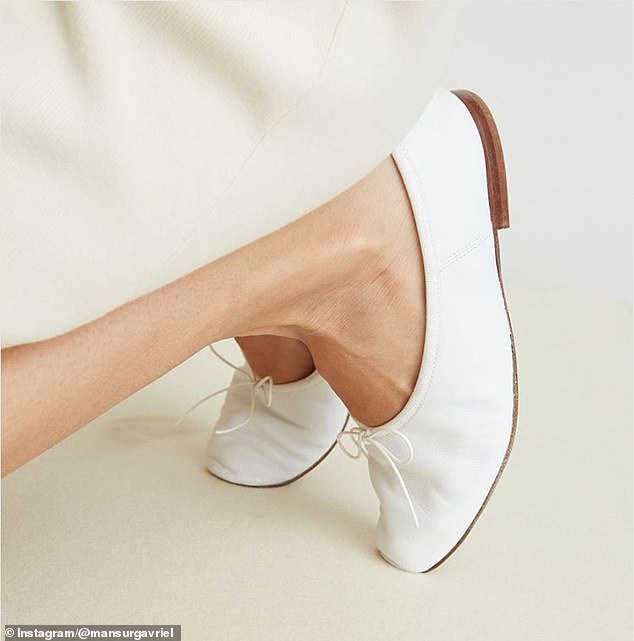 What’s going on? Mansur Gavriel posted a photo of a model wearing a pair of its white ballerina flats and a cream dress on Instagram, but the freaky image caused quite a bit of confusion

Confusing: People took to the comments section of the post to ask what was going on

‘What the hell is going on with this foot and leg?’ one commenter asked.

Many people believed the appearance of the image was the result of poor Photoshopping.

‘Omg. This is really bad Photoshop guys,’ one Instagram user commented, while another added: ‘This is a really unhealthy body image….’

A few people explained that the issue wasn’t bad Photoshop but rather the dress matching the background, with one person writing: ‘She‘s deep squatting, so her dress is covering half her leg…’

A confused Instagram user thanked her for her response, explaining: ‘I’m so glad you explained this, because my mind could not process it before.’

Explanation: Many Instagram users thought it was a Photoshop mishap until people explained the models cream dress was blending into the background

‘I thought her leg was warped at first,’ someone else admitted.

Even though it wasn’t actually a Photoshop mishap, many agreed that it was a bizarre image that shouldn’t have been posted.

‘Odd picture selection,’ one person commented. ‘The dress should have been a different color than the background so it didn’t look like a weird leg or a Photoshopped pic.’

‘Dress/ skirt or floor should be different color or tone. This is [a] very unfortunate shoot. Someone post it without checking it first,’ another person added.

Someone else admitted: ‘Can’t unsee my first impression of this image, even though I finally figured it out…’

Scary: Even after commenters explained her dress was simply covering part of her legs, people said the image was frightening and would cause nightmares

There were plenty of people who found the image downright frightening.

‘What the? Is this an [exorcism]? How do I unsee this,’ one critic asked.

‘It took me so long to get what was going on here, and yet I have a feeling I’m still going to have nightmares,’ another commented.

Then there were those who couldn’t care less about the photo and were more annoyed by the fact the brand was advertising a shoe style that is currently sold out.

‘Stop doing this to us until they’re back,’ one person griped, while another added: ‘BUT THEY ARE OUT. OF. STOCK.’