Lucy Watson has admitted that ‘no vegans are perfect’ after being branded a ‘hypocrite’ for having ‘leather’ seats, following a TV debate over animal-friendly Tesco commercial.

Lucy, 28, who was speaking at her one-year-old vegan restaurant Tell Your Friends, which she co-owns with her sister Tiffany on London‘s New King’s Road, discussed the bad rap those who practice veganism can sometimes get.

Lucy, who is a vegan herself, was recently attacked on Instagram for having ‘leather’ seats in her car.

While she was also branded as ‘patronising’ during an appearance on This Morning, when she debated how ‘real’ Tesco’s latest commercial was – which depicts a father changing one of his recipes when his young daughter tells him she no longer wants to eat meat. 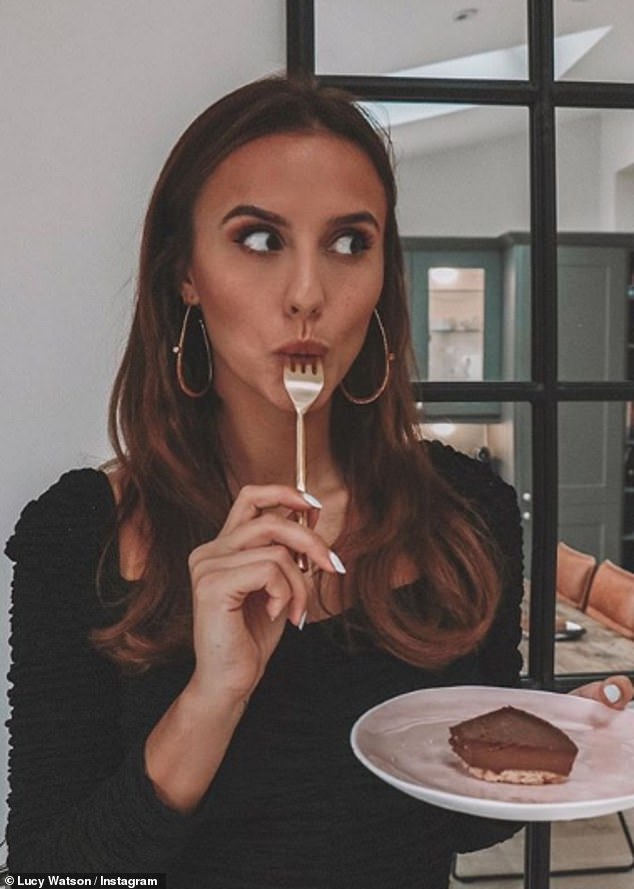 ‘No such thing!’ Lucy Watson does not profess to be the ‘perfect’ vegan, admitting that this is an impossible feat to achieve

‘There is no such thing as the perfect vegan!’ Lucy says, her dog Digby perching on her lap.

‘You just have to make the effort and that’s what’s important. We are always trying and evolving. If you’re not willing try things out as a vegan you have no right to be preachy anyway.’

But both Lucy and Tiffany, 26, are thick-skinned, and used to dealing with this sort of backlash.

Lucy was recently attacked on Instagram for having ‘leather’ seats in her car. And so stood up for herself.

‘I reply sometimes because I don’t want other people reading comments and getting the wrong impression,’ she says. ‘Sometimes I leave things because people are just there sometimes just to hate. I will just block them.

‘But if someone accuses me of being a hypocrite I’ll reply. The person who accused me of having leather seats – unless fake leather didn’t exist you have no right to say this to me.’ (Lucy’s seats are, naturally, faux!) 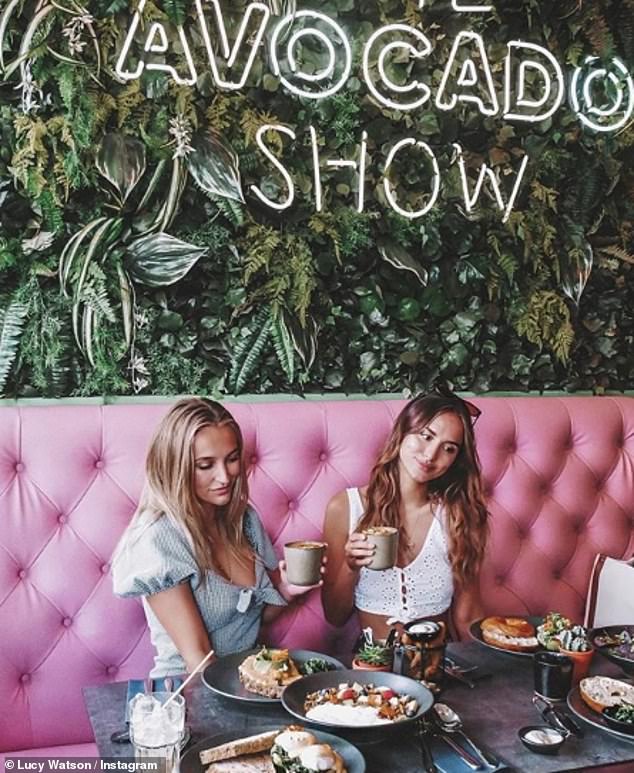 Thanks to their social media platforms and healthy following, the Watsons have contributed hugely to making cruelty-free ‘cool’ (which, surely, is as it should be). Yet, joining them for lunch was an even more eye-opening experience for me – a man who does still eat meat.

First of all, they know this about me – and they don’t dislike me for it. While many have presumed being vegan is synonymous with rigidity and judgement, there’s something about Lucy, Tiffany and their restaurant that makes the prospect of veganism undaunting and wholly doable.

For starters, the sisters (who definitely know what the inside of a gym looks like) are the first to admit that their menu is not just about clean, guilt-free eating.

‘Yes potatoes are healthy but not if they’ve been deep-fried. Sometimes I have to consciously eat whole plant-based foods because I forget about all the great processed foods that are still vegan,’ Lucy recounts. 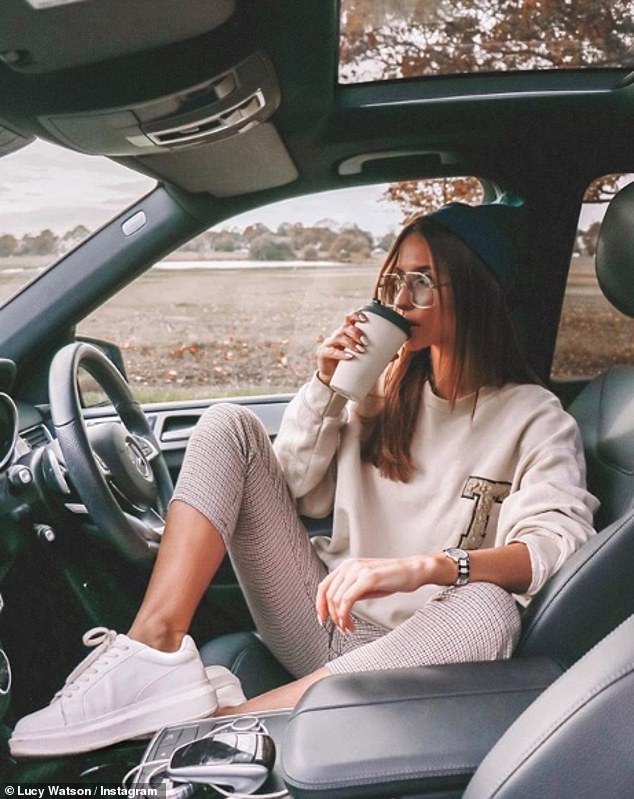 Hitting back: Lucy was recently attacked on Instagram for having ‘leather’ seats in her car. And so stood up for herself 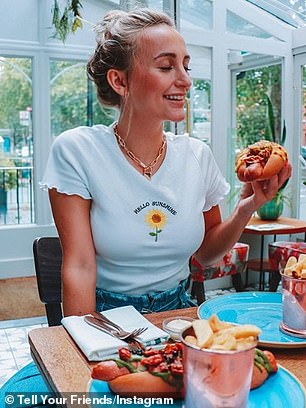 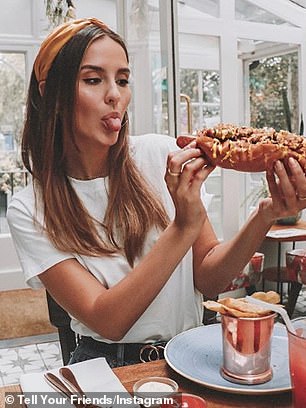 Resilient: Both Lucy and Tiffany are thick-skinned, and used to dealing with this sort of backlash

‘Especially now,’ Tiffany adds. ‘So many more things are available to vegans, like donuts, pizza, mac and cheese.’

However, the message these women are conveying is that you can still indulge and treat yourself as a vegan – which makes the lifestyle choice much more appealing. Tell Your Friends is partly about heralding that.

‘Honestly, I wanted to open this place for selfish reasons,’ Lucy says as the ‘chicken’ and ‘cheese’ bites are delivered to the table. ‘There was literally nowhere around here that we could eat. So many vegan places have popped up in Central and East-London since, but literally there was nowhere here [in West-London]. So we saw a gap in the market.’

Together with the help of their father – who owns various eateries – the Watsons started making plans.

‘We didnt want to do it with dad necessarily,’ Lucy goes on. ‘But he said he wanted to do it collaboratively.’ 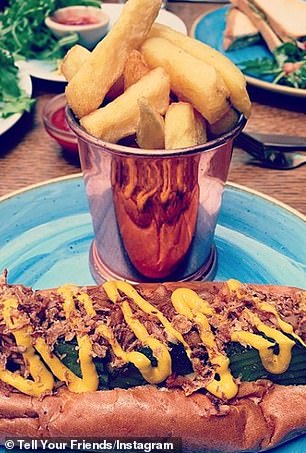 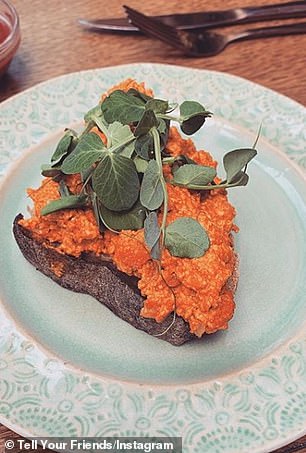 No meat, no dairy (seriously): The ‘hotdog’ [L] provides a sausage-like glory while the ‘scrambled eggs’ [R] are on the same level of impressive as the ‘cheese’

‘We were very hands on ourselves,’ Tiffany adds. ‘But having him and his experience was invaluable. We clashed with dad a few times but that’s what happens when you go into business with your family.

‘It’s so easy to just say what you want in the heat of the moment. It can be hard to switch off and be a family and not talk about work, but that’s just because we are so passionate about it. And we had to build this all from scratch.’

‘It was a dark hole in here,’ says Lucy of the site that existed pre-Tell Your Friends. ‘You had to really be able to see through it and see past the darkness.’

This bleak picture is hard to imagine when the restaurant is now a welcoming, cosy, fun hang-out. A third of it is a glass conservatory-type box, and the rest is decorated with neon signage, colourful accents and quirky crockery and cutlery.

‘We always knew it was going to be challenging. But it wasn’t about making money, so it wasn’t stressful because we just wanted it to exist,’ she adds.

By this point the faux-chicken and faux-cheese has been tasted and I am bowled over. 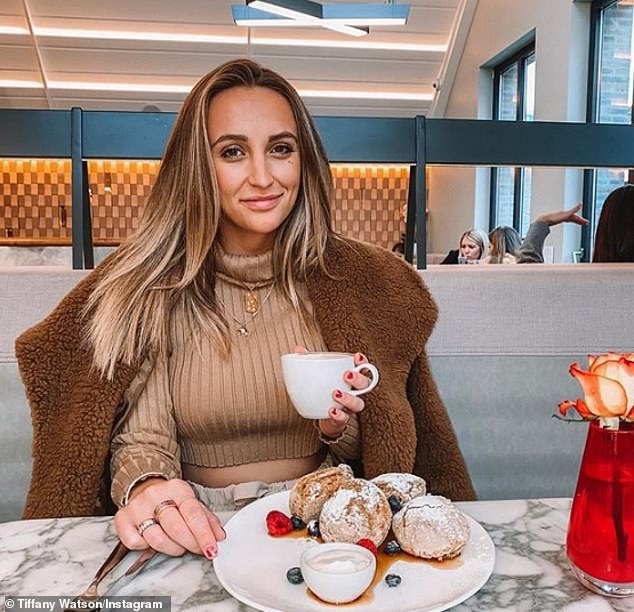 Say cheese! ‘We are definitely a family of cheese lovers,’ Tiffany says. ‘I used to love Camembert. I’d always eat it before I became vegan’ 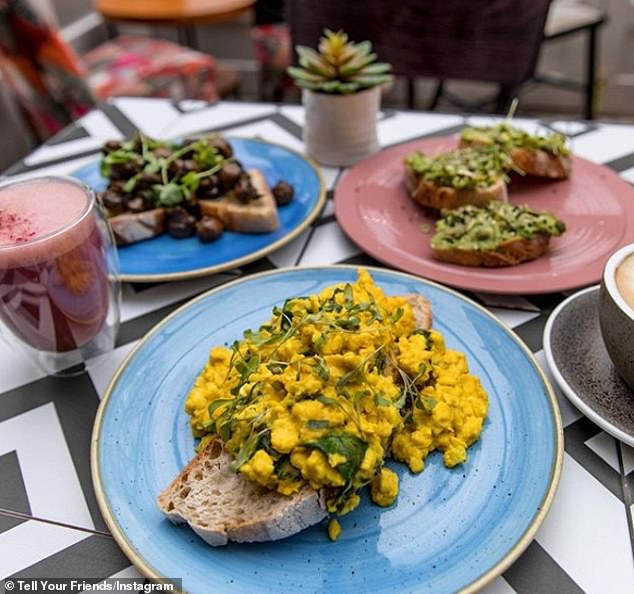 Be our guest! The Watsons admit they are often met with criticism from those who don’t understand why they would want to replicate ingredients like meat and dairy, when veganism is, essentially, anti these things

The ‘chicken’ bites are something the girls are particularly proud of – made with jack fruit they taste like the real deal, and look the same – down to the flakiness of the ‘meat’. What you want from an actual chicken bite, you get at Tell Your Friends.

The ‘cheese’ bites, however, have me reeling. I want a wheel of whatever gooey deliciousness is oozing from the crispy coating.

‘We are definitely a family of cheese lovers,’ Tiffany says. ‘I used to love Camembert. I’d always eat it before I became vegan. We do it here in the evenings. It’s insane. We do wine and cheese nights. I always used to eat McDonald’s cheese bites, and I think ours are just as good.’

The Watsons admit they are often met with criticism from those who don’t understand why they would want to replicate ingredients like meat and dairy, when veganism is, essentially, anti these things. 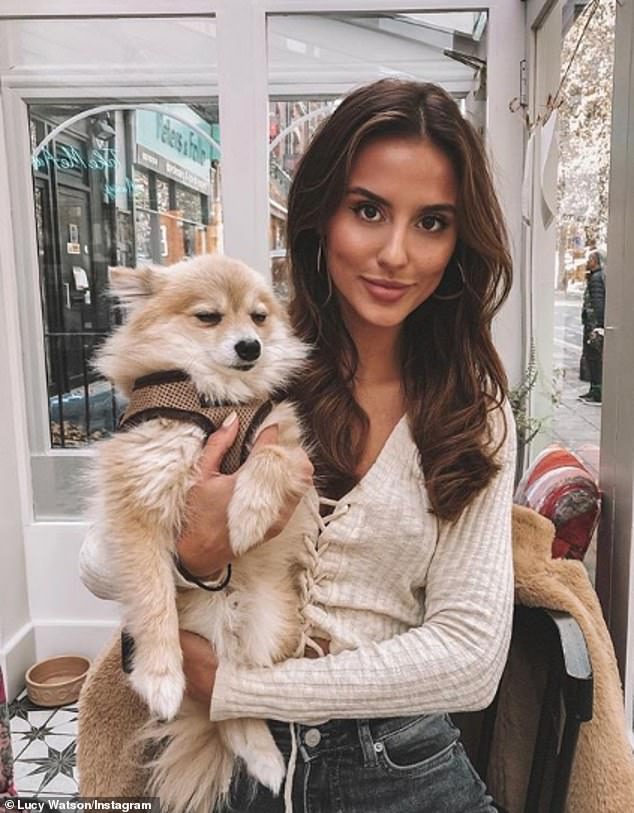 Animal lover: ‘There is no such thing as the perfect vegan!’ Lucy says, her dog Digby perching on her lap, good as gold, joining us for lunch (but not eating!)

‘Some people have a real issue with it,’ Tiff goes on. ‘But our message is that there are alternatives that you can enjoy that mean you don’t need to eat chicken, you can eat something that tastes just as good.’

Lucy – who has ordered an avocado cream cheese melt for her main – says: ‘Familiarity can make people want to try vegan food. Before I was vegan I never cooked. I am self-taught because I wanted to really try ways to still eat the things I loved. We all like comfort food.

‘Vegan doesn’t always mean healthy. If you’re eating a vegan burger it’s not necessarily a healthy meal, it’s just a healthier version. And it’s cruelty-free with no processing. That’s why becoming vegan is actually so easy to do because you don’t have to sacrifice the food you like. You can be healthy, obviously, but it’s more about not wanting to eat animals.’

‘That’s why our menu has something for everyone,’ Tiff says. ‘You can’t be eating salads every day for the rest of your life. Some people do but I don’t want to. Everyone wants to indulge now and then.’

As if on cue, my ‘hotdog’ arrives. It is delivered to me in all its sausage-like glory, placed neatly between a lengthy sumptuous bun, drizzled with mustard and coated with onions, a side of fries glistening next to it. It looks and tastes like everything anyone in the market for a traditional hotdog could want. 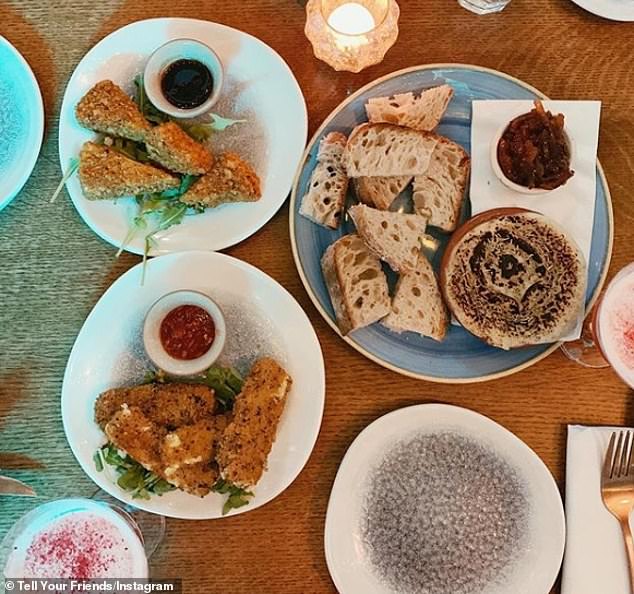 Scrumptious: The ‘chicken’ bites are something the girls are particularly proud of; made with jack fruit they taste like the real deal, and look the same – down to the flakiness of the ‘meat’ 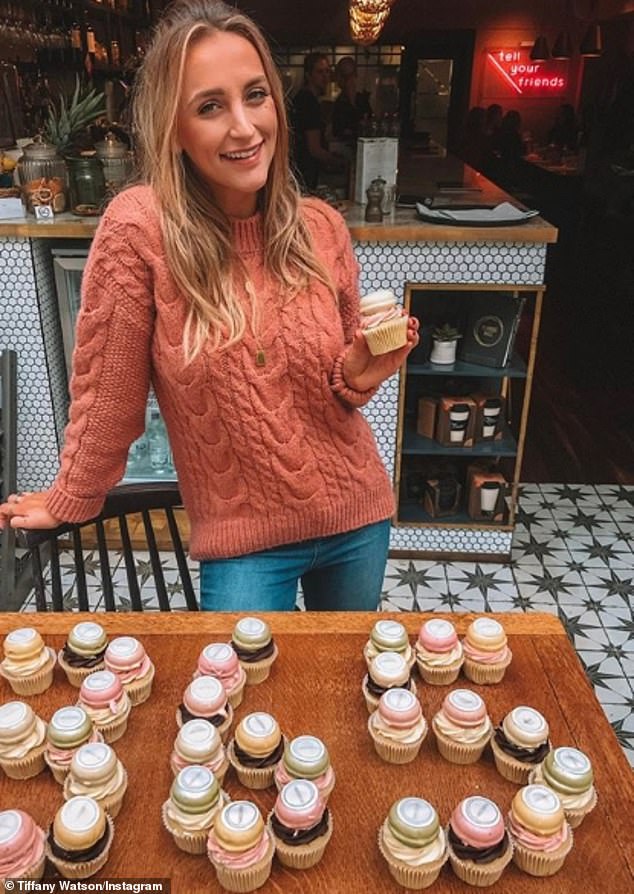 Season-to-season menu: ‘We keep the core stuff but people like change. Some people come every week and we don’t want them to be bored. Although some people are obsessed with the same thing,’ Tiffany says

Then comes the ‘scrambled eggs’. They are on the same level of impressive as the cheese. They’re earthy, smoky and nutty. Made from turmeric and tofu, they rest on a bed of crispy toast – not a hint of an animal in sight.

‘I think when you go vegan that eggs are the biggest void in your life,’ Lucy – who went from vegetarian to pescatarian to full-Vegan four years ago – says.

And it seems that when it comes to replicating eggs, the amateur chef – who has two cook books and works with the Tell Your Friends team, including Tiffany, to hone the menu – has smashed it.

‘We come up with ideas with the chefs and do trials and tastings, and give our team freedom to play around with ideas,’ she goes on. ‘We want to be diverse. And to cater for everyone, like gluten free, raw food, food for kids…’

Children need not worry. There’s everything on the kids’ menu from sausages, beans and mash to hearty pasta plates. In the winter, the menu plays on the comfort side of things even more – offering up curries, a seitan steak and ale pie or a mushroom chop. There’s roasts on a Sunday (a meat alterantive, a lentil loaf, or a stuffed mushroom served with vegan cauliflower cheese and Yorkshire pudding) and desserts come in the form of chocolate tart with blood orange caramel and rice pudding with berry compote. 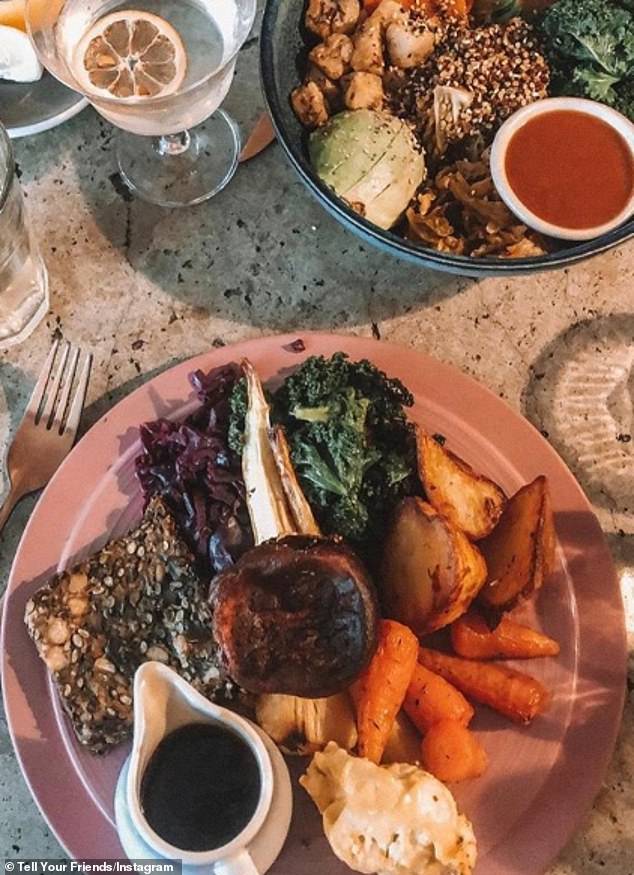 Comfort food: There’s roasts on a Sunday – a meat alterantive, a lentil loaf, or a stuffed mushroom served with vegan cauliflower cheese and Yorkshire pudding

‘It’s a season-to-season menu,’ Lucy explains, as Tiffany adds: ‘We keep the core stuff but people like change. Some people come every week and we don’t want them to be bored. Although some people are obsessed with the same thing.’

Tiffany owns a cruelty-free brand called threesixfive, which produces stationery and accessories. ‘I am really focusing on expanding it, and going into retail,’ she says.

Lucy – who recently adopted a kitten from Kefalonia with her boyfriend James Dunmore – looks to set up a charity.

‘We got a lot of attention for the charity we used to adopt our cat. So I want to help other charities. I want it to be a middle-ground for fund-raising for other small charities,’ she explains.

Yet these endeavours are by no means distracting them from Tell Your Friends – which will now gear up for Christmas. And during a season when meat is traditionally the order of the day, you’ll find way more than a dry nut loaf on this restaurant’s menu.

Tell Your Friends is surely everything you could want from a vegan restaurant, whether you are V-curious or far from a vegan virgin. Eat, indulge and sacrifice (literally) nothing.