Loose Women’s Saira Khan today provoked a furious debate over a ‘well-being week’ for teachers, claiming that she too is ‘overworked and underpaid’.

The panel were debating the issue amid after it emerged that Ilkley Grammar School in West Yorkshire were laying on therapy dogs, pilates classes, spa treatments and a pub quiz to help teachers cope with GCSE stress.

Saira slammed the idea, arguing ‘all jobs are stressful’, and pointing out that teachers get 13 weeks holiday during the year.

But viewers hit back, saying that nobody can understand the pressures of being a teacher unless they’ve done the job or witnessed their loved ones under strain. 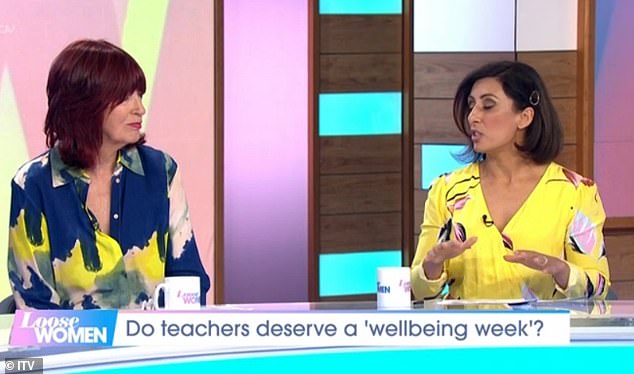 Saira Khan and Janet Street Porter were left divided over the topic, but viewers were left unimpressed by Saira’s argument

One wrote: ‘Unless you have ever been a teacher or worked in a school you have no idea of the pressures involved in being a teacher #LooseWomen.’

Another commented: ‘My mum is a headteacher. Saira claiming that her kid’s teachers “aren’t stressed” is the most ignorant thing I’ve ever heard.

‘I would never wish the stress I’ve witnessed my mother under on someone like her, she clearly has no idea.’

For the wellbeing week, Ilkley Grammar School recruited a greyhound named Betty from Pets As Therapy, to coincide with pupils taking their GCSEs.

Viewers slammed the Loose Women panelists in the debate, with one calling Saira ‘ignorant’ for her views on teachers

Parents at the school, rated outstanding by Ofsted, were also asked by headteacher Helen Williams to donate prizes to a teachers’ raffle, with a Prosecco afternoon tea and a two-day getaway already up for grabs.

But the Loose Women panel were left unimpressed, with Saira arguing that teachers have a large amount of time off per year.

She said: ‘When it comes to being overworked and underpaid, I get it – I’m in the same position. But teachers do have over 13 weeks of holiday a year.’

‘I know sometimes they do have to work in those holidays, but I have family who are teachers, and we have this discussion with them all the time.

‘I don’t see my family working the full six weeks of those holidays.’ 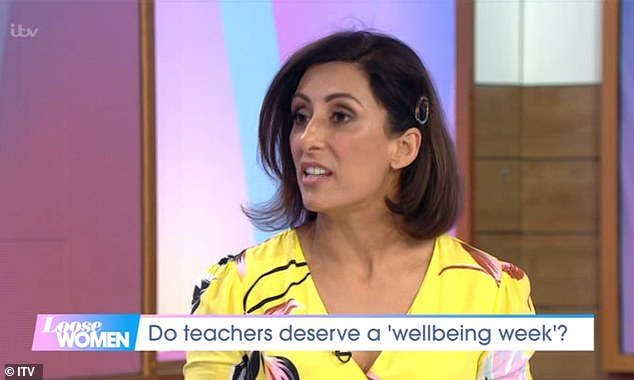 She went on: ‘I’m all for wellbeing, but do it outside of work. Everybody gets stressed at work, it’s not easy.’

Janet Street Porter disagreed with her, suggesting that teachers were the most important person in a child’s life.

She said: ‘Your child spends more time with your teacher than they do with you.’

Saira claimed this wasn’t a problem she felt her children’s school were concerned about, suggesting: ‘My teachers aren’t stressed out.’ 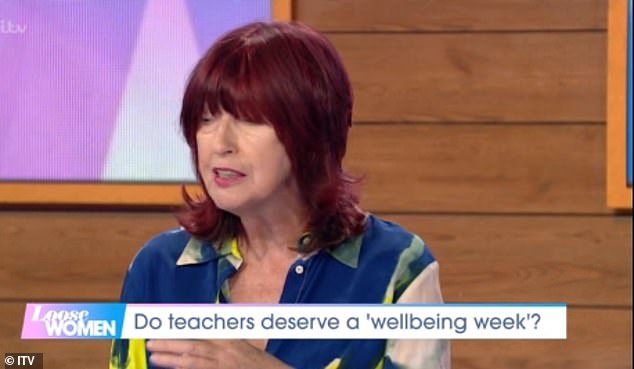 But Janet wasn’t so sure, and gestured to evidence that suggested one in five teachers felt ‘very stressed’ in their job.

‘What’s the matter with pilates at lunchtime? An after-school walk is hardly controversial.’

But other panelists appeared to agree with Saira, with Ruth weighing in on the debate. 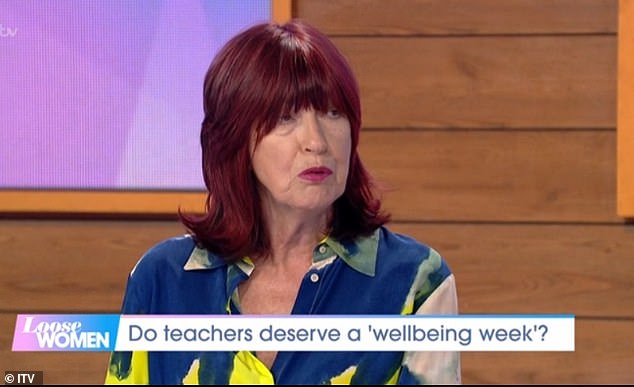 Janet suggested that teachers deserved the wellbeing week, and pointed to statistics that say one in five teachers feel ‘very stressed’ about their job

The Loose Women host said: ‘We all have huge respect for teachers, but lots of jobs are stressful. This job can be stressful sometimes.

‘Where does that stop? The rest of us have to manage our stress outside of work hours.’

And Saira was left shouting back at her: ‘Teachers are there to teach. They’re trained to teach. Do it in your own time.’ 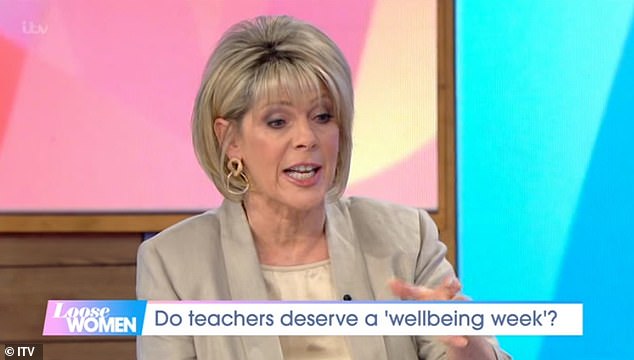 Meanwhile Ruth said lots of jobs, including her own, could also be ‘stressful’, and asked ‘where does that stop?’

Viewers were critical of the Loose Women panel, with many slamming them as not understanding the stress of teaching.

One wrote: ‘The work they do over all holidays are not paid for yet they are still expected to do this. Teachers deserve a break especially in this generation where kids are running riot because disciple cannot be dished out due to parents complaining at any slight thing #loosewomen’

Another commented: ‘Teachers may get 13 weeks of holiday but I’ll assure you they do not get paid for this, their salaries are for the working weeks only not the school holidays.’

Meanwhile others agreed with Ruth and Saira, with one suggesting:’Every job has their moments of stress, does that mean we should all get an extra week off? Why is it only teachers being focused on?’

Viewers were highly critical of the Loose Women panel, with many suggesting teachers did deserve the wellness week

She told the paper: ‘It’s definitely the right thing to do. Teachers have a really challenging job, and that comes across in terms of workload and stress levels.’

Parents at the school, rated outstanding by Ofsted, have also been asked by headteacher Helen Williams to donate prizes to a teachers’ raffle, with a Prosecco afternoon tea and a two-day getaway already up for grabs.

But some agreed with Saira and Ruth, suggesting all jobs could be stressful and that teachers shouldn’t be the only ones focused on

In a letter to parents, she said the well-being week aimed to ‘support the staff’ so it could benefit the school community as a whole.

Previously parents have been asked to voluntarily donate £180 per year to the school to cover changes in funding.