The Loose Women panel clashed today as they debated whether it was appropriate to smack your children.

Appearing on the programme this morning, singer Brenda Edwards, 51, argued ‘a little tiny hit’ helps children behave, saying: ‘I don’t think it does any harm. When I used to get smacked, I would remember the smack and it would make me not misbehave.’

But she was challenged on the controversial view by host of the show Charlene White, 40, as well as singer and actress Kelle Bryan, 41.

Kelle argued smacking could be ‘traumatic’ for children, revealing: ‘For me, I’ve got those things ingrained in my head.’ 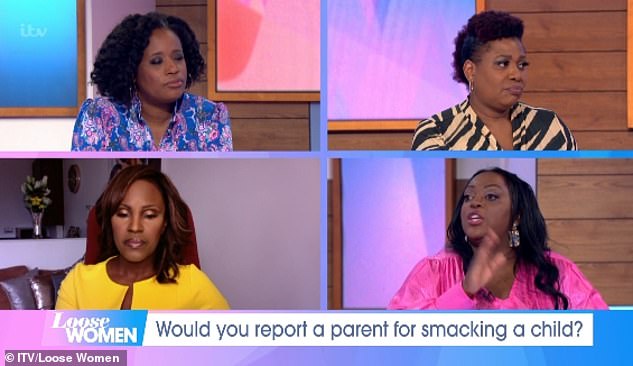 Singer Brenda Edwards, 51, clashed with ITV News anchor Christine White, 40, and singer Kelle Bryan, 41, on Loose Women today as they debated whether it is appropriate to smack children

Brenda argued  she didn’t understand what the controversy over smacking is, saying: ‘A little tiny smack, I don’t think does any harm. I was “badoped” and I haven’t turned out too badly.’

She insisted that smacking had ‘some kind of affect on her’ and helped her parents teach her how to behave.

But Charlene challenged her, saying: ‘But then you’d have only ever been smacked once if you’d only misbehaved once and you clearly didn’t just get smacked once did you?’

Meanwhile Kelle said she had decided when she became a mother that she wouldn’t smack her children in order to discipline them. 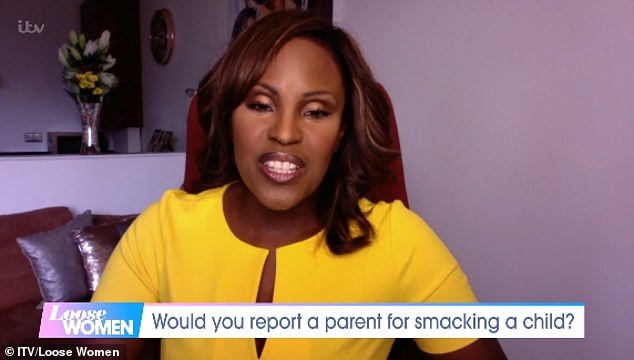 The Eternal singer said she had never smacked her children, but revealed she had gotten into ‘heated debates’ with her parents about the decision

She explained: ‘I decided when I had my children that I wasn’t going to introduce smacking to them. If you ask my mum, she was brutal.’

However she explained the decision had been controversy with her own parents, saying: ‘I used to have quite heated debates with my parents because my dad would say, “You should be disciplining Regan.”

‘I was very firm that I didn’t want my children to be smacked because of what I wen through as a child.’

Charlene added: ‘We were all smacked as children. But do you think there’s an element of parents losing control as a reason why they smack?’

Judi argued: ‘There’s a difference between smacking and beating which needs to be defined. There’s a possibility that as parents, within that smack or beat, you lose control. 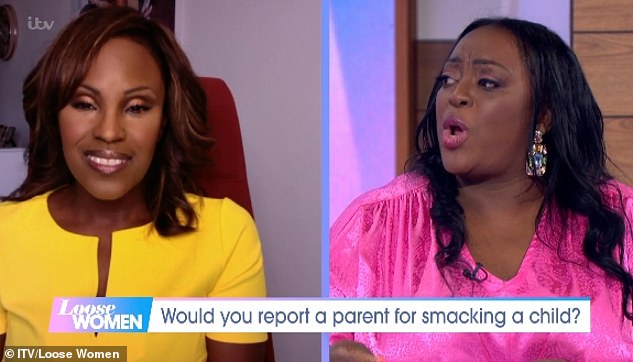 Comedian Judi Love, 40, argued she felt there was a difference between ‘smacking’ and ‘beating’ children

‘There’s other frustrations – it’s how am I going to pay for this again, I’ve had an argument with your dad, there’s so many other things layered on this.’

Charlene interrupted, saying: ‘You shouldn’t be able to take that out on your children though!’

Judi added: ‘I don’t smack my children because I just give them the look.’

‘As modern parents knowing there are other ways to discipline your children, should we still smack our children?’

The women went on to praise Supernanny Jo Frost for sharing alternative ways for managing children’s tempers with Kelle saying: ‘I find time out on the step really effective.

‘Once that punishment has been delivered, you bring them back to explain the reason why they’ve been punished. 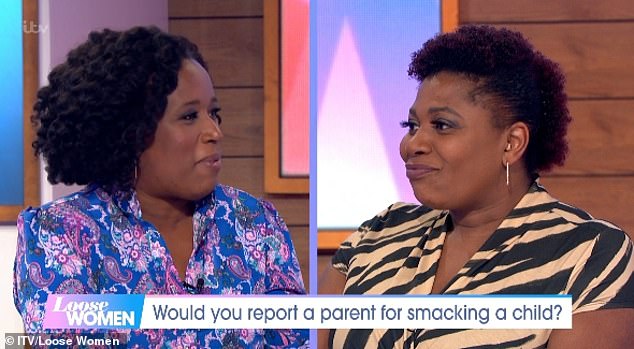 ‘Hopefully there’s some kind of explanation.’

The debate comes as members of the public in Scotland are being urged to call 999 to report parents caught smacking their children.

The SNP Government is bringing in sweeping new powers outlawing the corporal punishment of children.

Parents will face criminal prosecution for physically punishing or disciplining their children as the Children (Equal Protection from Assault) (Scotland) Act 2019 comes into force from November 7.

The new law, which was passed by Nicola Sturgeon’s Government last year, will see Scotland become the first country in the UK to ban parents from smacking their children.

Under the current law, parents are allowed to use ‘reasonable’ force to discipline their children under the defence of ‘reasonable chastisement’.

However the new law will remove the defence and is aimed at giving children the same protection from assault as adults.