A Los Angeles home owner whose sprawling mansion was featured on hit Netflix show Selling Sunset has claimed that real estate agent-turned-TV star Christine Quinn lied about her being a client.

A woman named Sayo had her LA home featured on the new season of the show, and she was surprised to see her house appear in one particular scene where Christine is seen explaining that the owner is a male plastic surgeon.

But Sayo — a female clothing designer and founder of the brand Azu Petie — has now taken to TikTok to insist that this isn’t the case, sharing a video of herself inside the home in question, while claiming that she has never even met Christine. 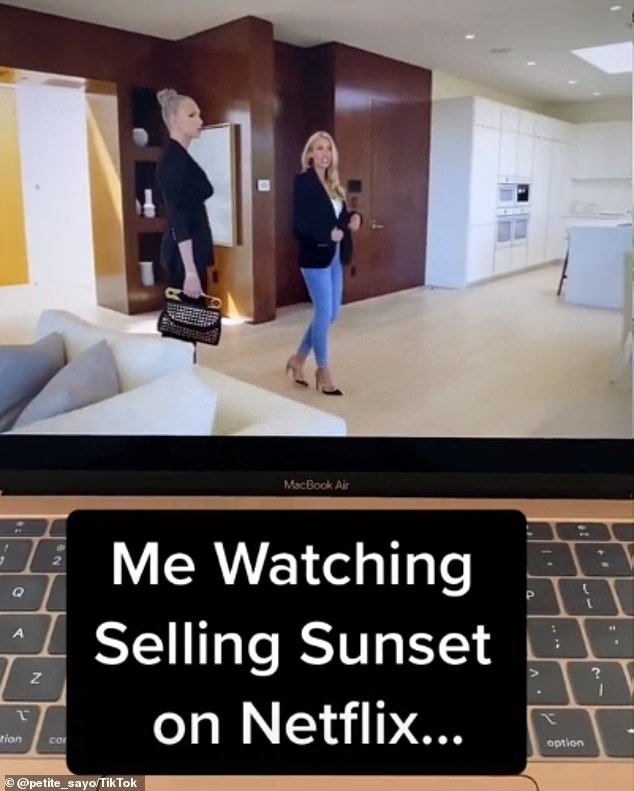 Exposed: An LA home owner whose house was featured on Selling Sunset claims that Christine Quinn lied about her being a client 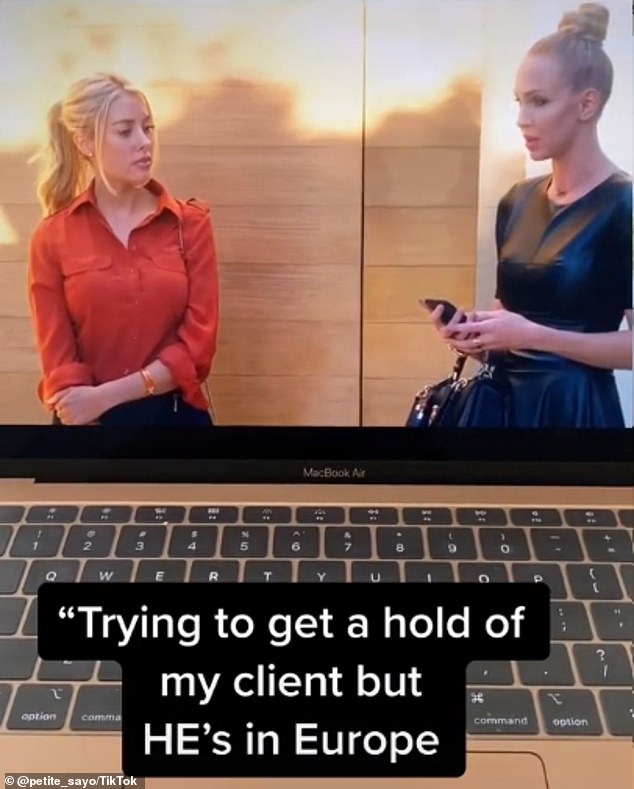 On the show: In the episode, Christine says the owner of a home is a plastic surgeon who was away in Europe

In the viral TikTok video, which has been viewed 3.7 million times, Sayo films the scene of the show playing on her laptop.

Christine is at Sayo’s home with her colleague Heather Rae Young, but the two are locked out just as Heather’s client is supposed to arrive for a tour.

Christine says that the seller is a plastic surgeon who she is having trouble reaching: ‘I’m trying to get ahold of my client but he’s in Europe.’

Sayo then pans the camera around her house, showing that it’s the same one from the show — before countering Christine’s claims.

In a follow-up video, Sayo clarified some details, admitting that the house was for sale with Christine’s agency, The Oppenheim Group. 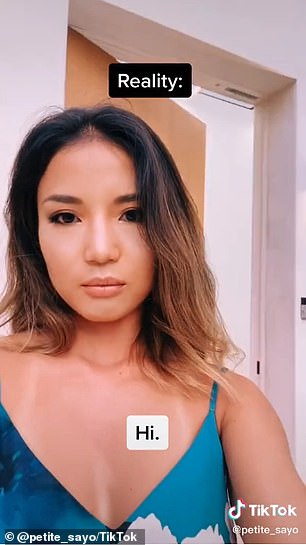 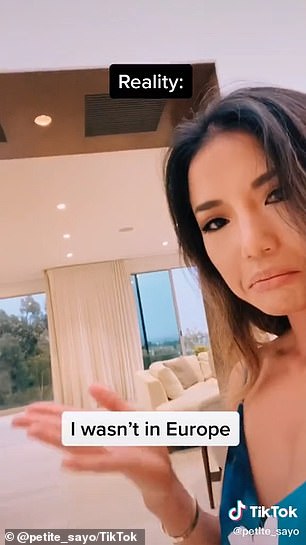 Truth: But Sayo — a female clothing designer and founder of the brand Azu Petie — has pointed out on TikTok that this isn’t the case, and says that she has never even met Christine 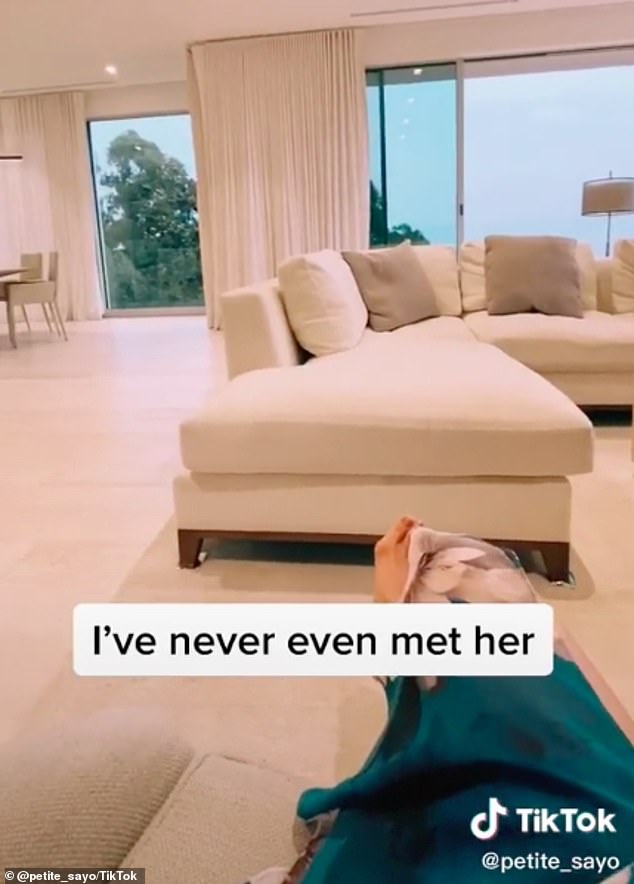 Details: In a follow-up video, Sayo clarified some details, admitting that the house was for sale with Christine’s agency, The Oppenheim Group 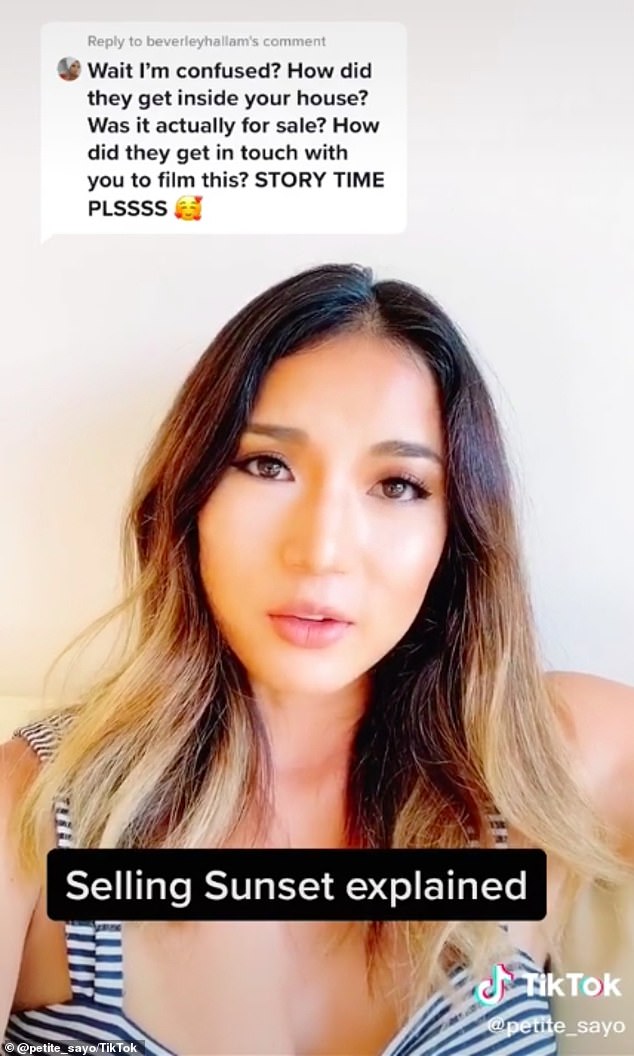 ‘The whole thing about her not being able to go inside, she’s locked out, she doesn’t have a key, she can’t even reach her client — is scripted,’ she said

‘The house was for sale,’ she said, but explained that it was listed it with Christine’s boss Jason Oppenheim, not Christine.

‘I’ve never met her and she’s never been my agent,’ she added.

‘The whole thing about her not being able to go inside, she’s locked out, she doesn’t have a key, she can’t even reach her client — is scripted.

‘She never had the listing, but in the show she was pretending like it’s her listing, and that’s misrepresentation of facts.’

She also added more details in the comments, saying: ‘The producers, crew, talent had access to the house the entire time.’ 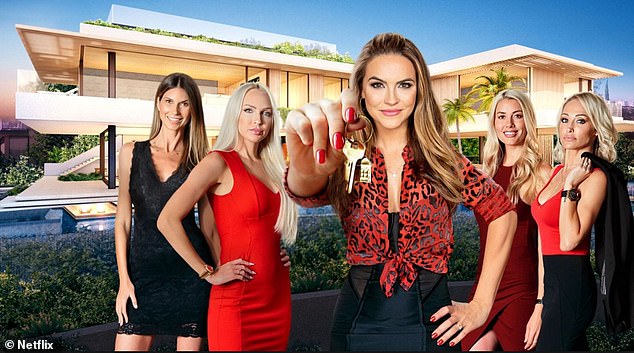 Streaming: It’s not the first time this summer that details of the show have been called into question

The TikToker isn’t the first person to raise suspicions that not everything on the show is what it seems to be.

Last week, Chrissy Teigen said she had recently watched the Netflix reality show and expressed doubt over the validity of the stars’ real estate careers.

‘I just watched all of Selling Sunset after watching everyone talk about it for so long!’ the 34-year-old said.

‘I don’t even think anyone on it is as mean or insane as you guys said? Maybe I’m just so used to it because I live here? This is pretty normal lol some are actually really nice.

‘Maybe I also know everyone on tv plays up a character. They’re all doing that. You guys are … super mad at people who are in on the joke,’ she went on.

But then she added: ‘I will say, I look at LA real estate a lot and have never seen any of these people lol neither have our agents, who I have obsessively asked.’ 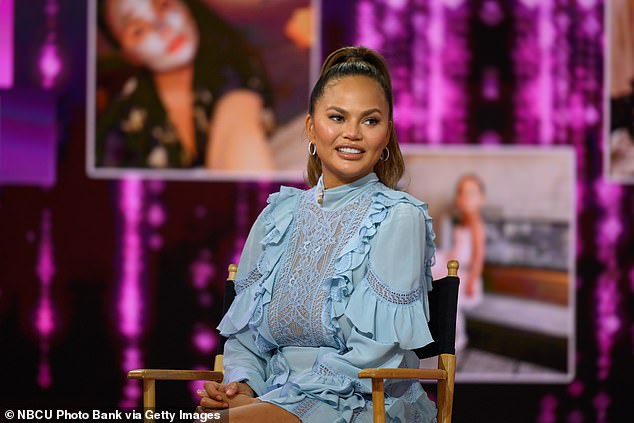 ‘I just watched all of Selling Sunset after watching everyone talk about it for so long!’ she said

Acting: She disagreed with those who think cast members are ‘mean’ or ‘insane’ and added that ‘everyone on TV plays up character’

Wait a minute! But she did say that she looks at ‘a lot’ of LA real estate and has ‘never seen’ any of the show’s stars on the job — and neither have her and husband John Legend’s agents

‘I heard from someone that lives across the street from their office that it’s literally ALWAYS closed, no one is ever there,’ wrote a woman named Marissa. ‘She did see one guy in there once, but not anyone from the show.’

‘If you look them up on MLS they have a very small number of actual listings sold or for sell. Some aren’t even licensed,’ added a woman named Courtney.

‘I read they are not actually real estate agents, only Jason and Brett are, so that would make sense,’ yet another commenter chimed in.

The thread earned enough attention that Jason Oppenheim, the owner of The Oppenheim Group (whose agents star on the show) took time to reply.

‘Chrissy, thanks for watching our show!’ he wrote. ‘Regarding your agent’s knowledge of members of my team, I respectfully don’t know him either although that doesn’t mean he isn’t successful and didn’t just sell you a stunning home in Weho (seriously, I love your new house).’ 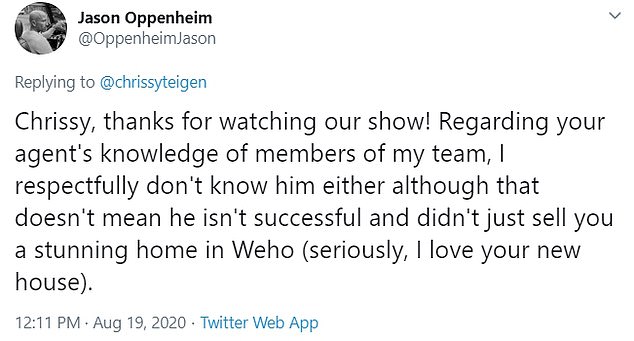 Stop the speculation! But boss Jason Oppenheim chimed in to defend his employees 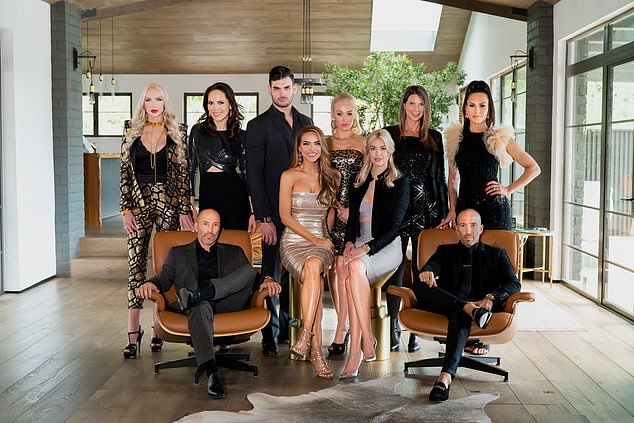 ‘My team works tirelessly and if their real estate successes don’t precede them yet, they will. Remember their names. And feel free to come by the office and say hi,’ he added.

Chrissy hasn’t responded to Jason’s reply — nor have any of the Selling Sunset stars chimed in on the matter.

‘Brett has left to start his own brokerage,’ she said. ‘The girls are fed up with the favoritism of Mary in the office, we don’t know who will move where.

‘It may be the battle of the brokerages!. I think season 4 is going to be the juiciest season ever.’