Kate Snow has revealed that she is seeing a therapist to manage her stress six months after her husband Chris Bro’s battle with coronavirus.

The 51-year-old NBC Nightly News anchor penned an essay about how she has started teletherapy to cope with the pressure of her demanding career and being a parent in the pandemic.

‘I’m stressed. I mean really, very, totally stressed,’ she wrote. ‘It’s not just the pandemic, the fear of disease and the isolation of the work-from-home thing, but trying to manage two teenagers and their schooling on top of a job that is quite demanding. Oh and there’s a tumultuous election in just a few days.’ 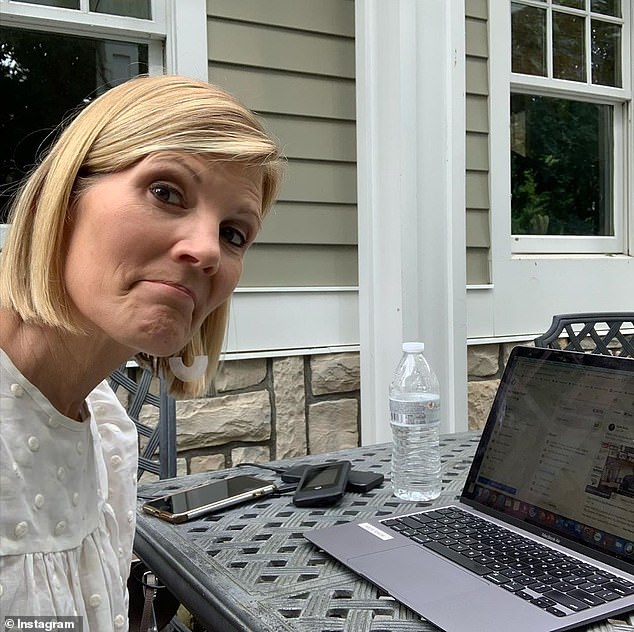 Candid: Kate Snow has revealed that she has been seeing a therapist remotely during the pandemic 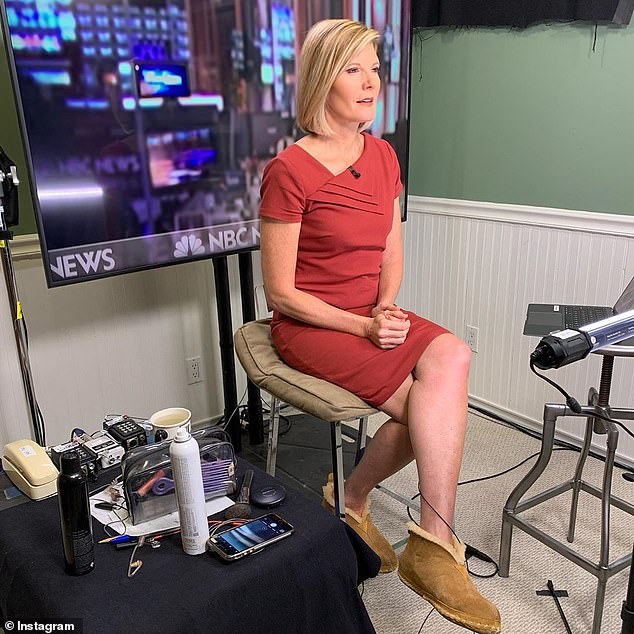 Hard to handle: The 51-year-old NBC Nightly News anchor said they mostly discuss the stress of her demanding job. The journalist has been filming the show in her basement

Snow explained that she has been covering mental health stories for NBC News for about ten years now, and she wanted to share her personal struggles to help reduce the stigma surrounding it.

Like many people in the pandemic, she sought out teletherapy, which enables her to speak to her therapist via phone or video chat.

‘Every couple of weeks, I meet with my therapist and talk things through,’ she said. ‘Today we talked about how stressful my job has been lately. I’m often assigned stories with a very tight deadline and need to race to study the subject, conduct interviews, and put together a coherent and factual script within hours.

‘All the while, texts are streaming in, my email inbox is out of control with dozens of updates on the election rolling in each hour.’ 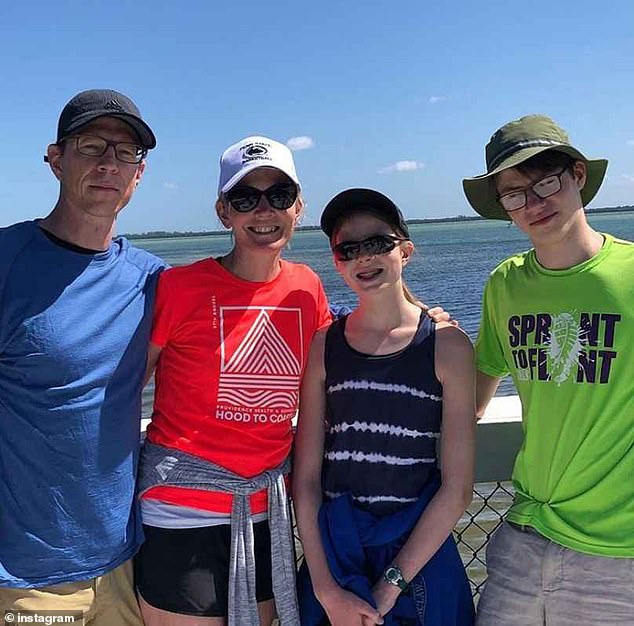 Honest: The mother of two admitted she has also been struggling with the stress of raising her teenage children Zach and Abby during the pandemic 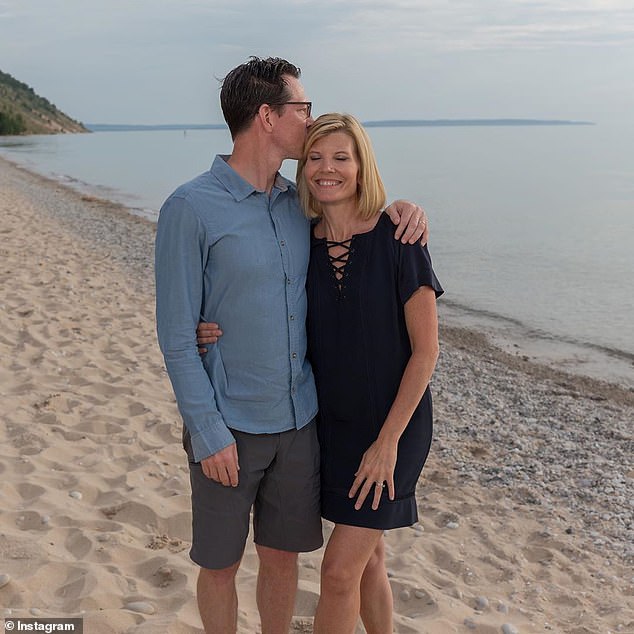 Snow noted that when she is paying attention to one thing, she misses the other. COVID-19 has only made things more difficult for her because she and her team are all working together remotely and can’t collaborate the way they used to.

The journalist has been filming her segments in her basement, where her family used to keep their ping pong table.

Snow said she and her therapist also talk about the difficulties of being a parent to her teenage children Zach and Abby during the pandemic.

The Snow-Bro family lives in the suburbs of New York City, and while her kids have returned to school, it’s only part-time.

‘Our kids are actually physically in school for half the day now and seeing teachers face-to-face (with masks, of course). But the virtual part of the day is tough,’ she admitted. ‘There are four of us in one house, all on screens for hours. 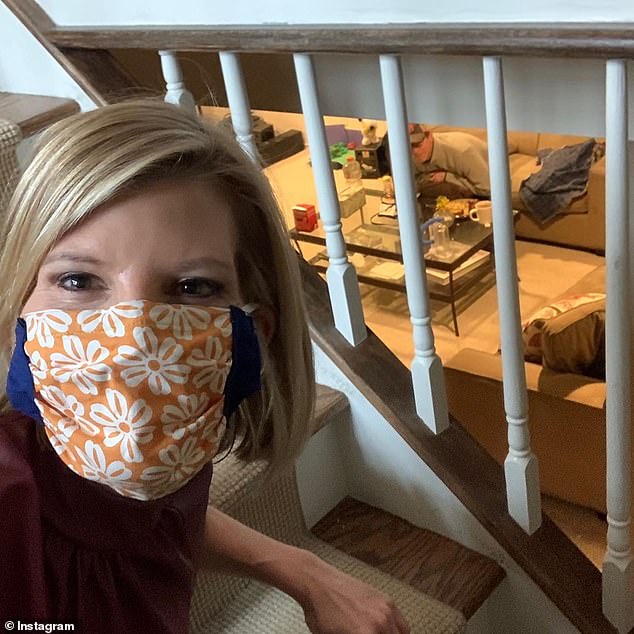 Keeping away: Snow took care of Bro while he quarantined in the basement of their home, which is in the suburbs of New York City 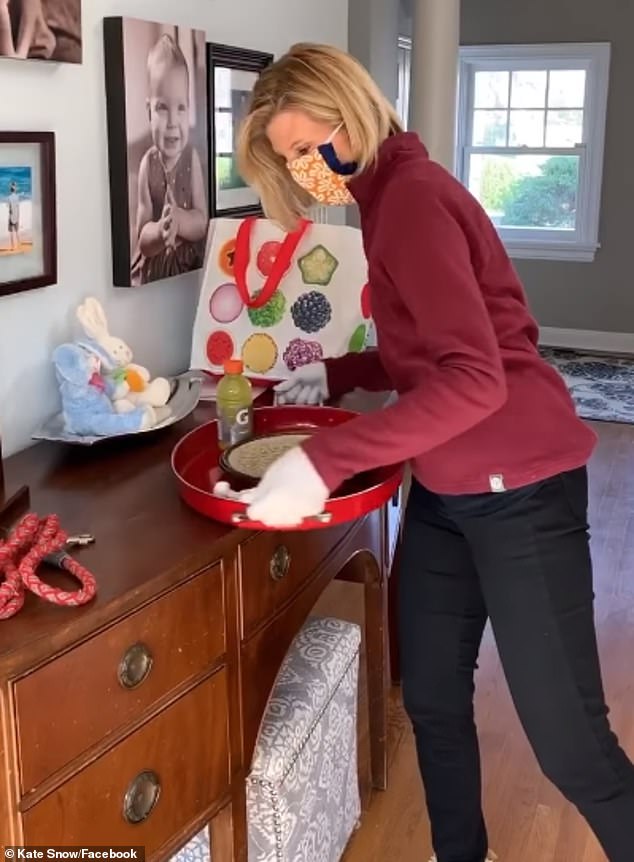 Under pressure: Snow admitted at the time that she was struggling with the exhausting task of caring for her husband, looking after their kids, and making sure everyone was safe and fed

‘I’m monitoring the homework they’re supposed to be doing. I’m worrying about their mental state. I’m yelling from the basement set, “Can someone please come down and help me?”‘

Snow said she will sometimes tell her therapist that she shouldn’t be so stressed because she’s lucky that she has a great job, a home, and a healthy family following her husband’s bout with coronavirus.

When she says this, her therapist will respond: ‘You’re still allowed to feel anxious and sad for all you’ve lost.’

Snow admitted that she used to think eating healthy and exercising was enough to keep her healthy, but she has found that therapy is just as important.

‘I hope that one of the lasting legacies of 2020 will be that we all realized how important it was to connect with family and friends — and to take care of ourselves,’ she wrote at the end of her essay. 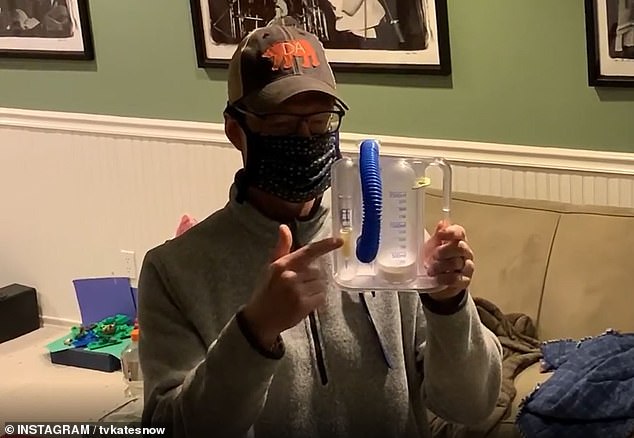 Behind the scenes: Bro used a spirometer helped himself recover from his bout with COVID-19

‘We are sharing in the pain and stress. And we will get through it… together.’

Snow revealed in a social media video in early April that her husband had developed coronavirus symptoms, explaining to NBC Nightly News viewers that she would not be anchoring the show because she was staying home to care for him.

She was candid about her fears for her husband’s health and what it would mean for her family if she had to take him to the hospital. Thankfully, Bro was able to fully recover at home.

‘My mind knows that he’s probably going to be just fine,’ she said at the time. ‘But I’m a reporter and I’ve been covering this for weeks. It’s hard for my mind not to wander into worst-case scenarios.’

Snow revealed that she and Bro were monitoring his blood oxygen level using an app called Oximeter, which was recommended by their doctor. Bro checked his levels every few hours when he was sick.

As well as worrying about her husband and their children, Snow confessed that she was growing increasingly exhausted and anxious while juggling caring for the kids and looking after Bro, who quarantined in their basement. 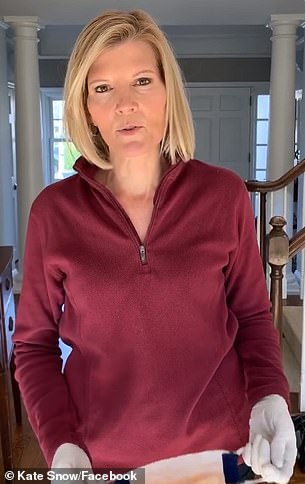 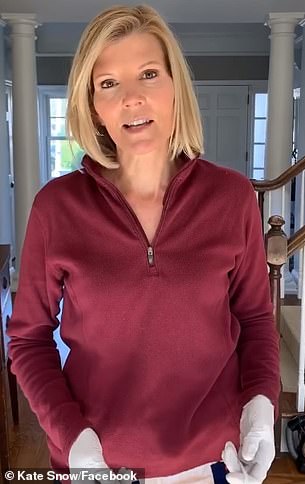 Advice: At the time, Snow urged others who were going through the same situation to seek an outlet for their emotions

‘I’m trying to be a good caretaker,’ she said. ‘I’m bringing Chris his meals. I’m bringing him clothing. I talk to him through the guest bedroom door. We text. Sometimes we FaceTime.

‘I spent much of the weekend deep cleaning the entire first floor of our home. I’m tired.’

But Snow said she was incredibly grateful for the family’s support system — namely their ‘amazing’ neighbors who delivered food to their home every time they went to the store to ensure she didn’t have to risk going out herself.

‘I know that we are lucky. Lucky that we have so much support, that we don’t live in a tiny apartment, that we went shopping weeks ago and we have plenty of food. Lucky that we’re not in a hospital,’ she wrote.

The NBC anchor urged others who are going through the same situation to seek an outlet for their emotions.

‘This is exhausting and anxiety-provoking,’ she said. ‘I do a lot of reporting for Today on mental health. ‘One piece of advice: If you’re going through what I’m going through, try to find an outlet, exercise, or talk to a friend. I plan to talk with my therapist tomorrow to keep myself on track. We will get through this.’