The Duchess of Cambridge looked elegant as she arrived at Buckingham Palace to welcome NATO leaders for a reception with the Queen today.

The royals’ hair was immaculately blow-dried and flicked out around the face, and she completed the look with winged eyeliner and a touch of lipstick.

The Duchess looked in high spirits as she was pictured mingling with guests at the high profile event, flashing a glimpse of her sapphire engagement ring. 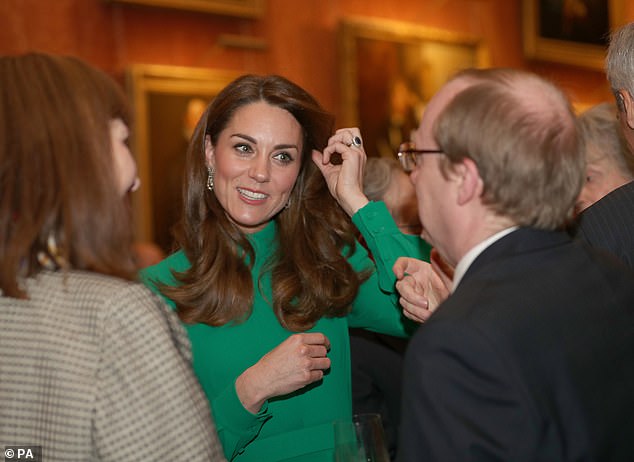 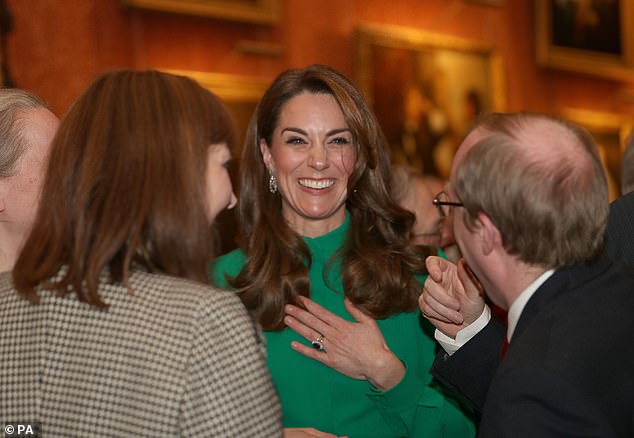 Kate, 37, looked in very high spirits as she mingled with guests at the high profile event, flashing her sapphire engagement ring 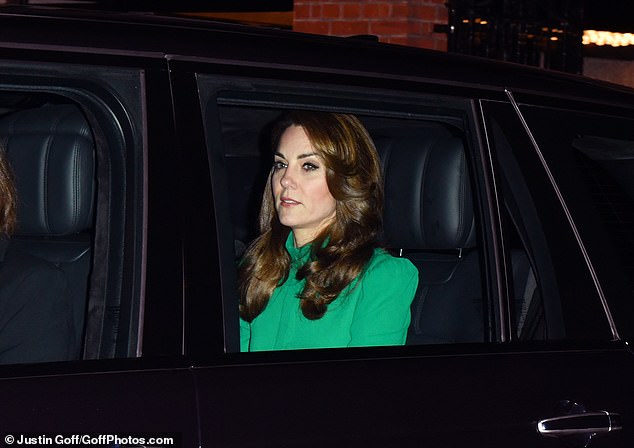 The Duchess of Cambridge goes green in Emilia Wickstead 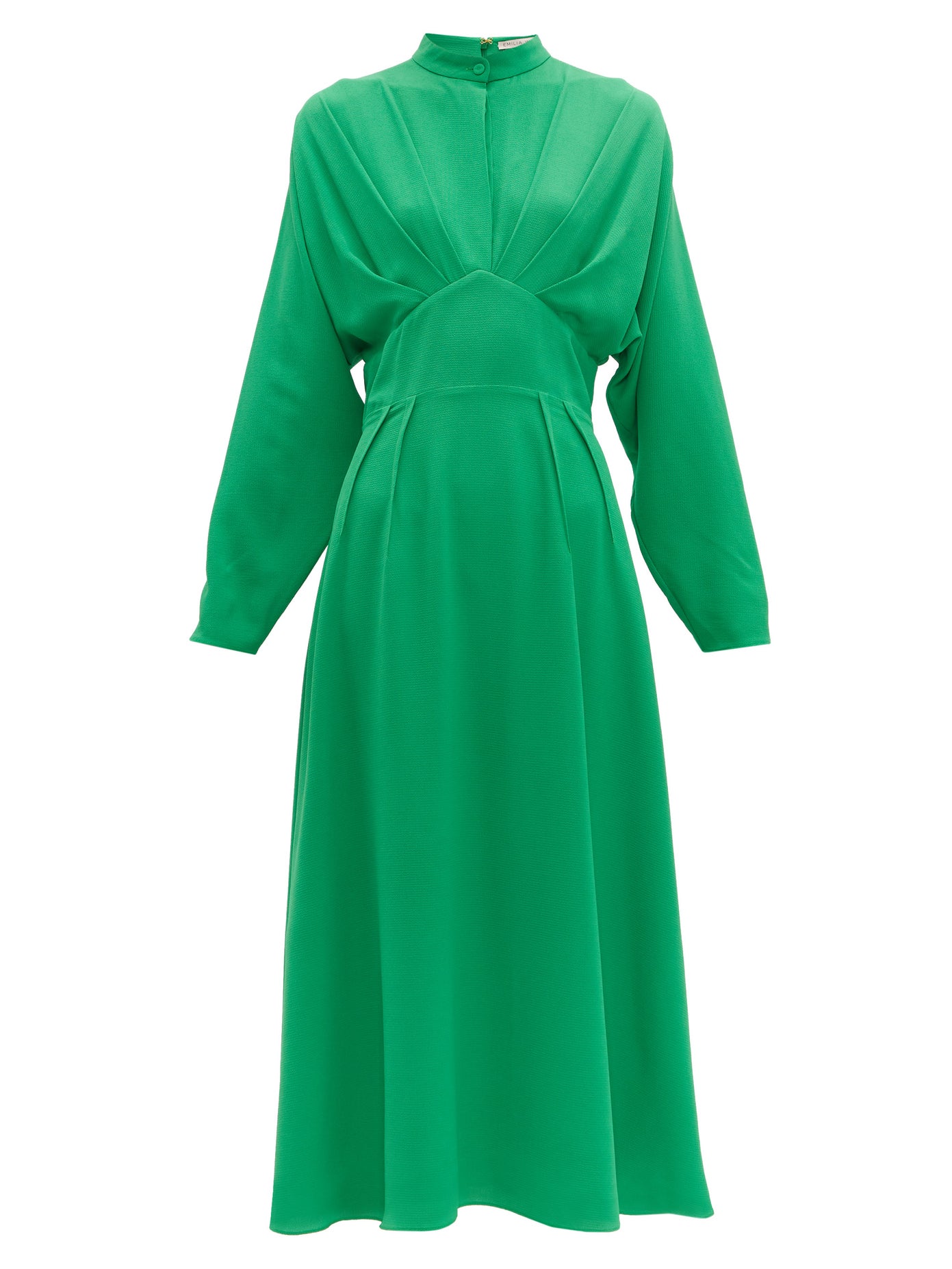 The Duchess of Cambridge is quite the fan of colour, and as December arrives she’s gone for a festive green for an engagement at Buckingham Palace.

Once again we’ve spotted Kate in an Emilia Wickstead dress with her signature waves to complete the look. She’s wearing a slightly custom version of the ‘Autumn’ dress, which appears to be a new addition to her wardrobe.

The midi number is crafted from a tailored crepe and is designed with Emilia’s (and Kate’s) penchant for British heritage with a vintage twist. The mandarin collar instantly catches your attention whilst the empire-line panel tapers the waist and creates a pleated bodice and floating skirt.

Fancy copying Kate? Then click through to MATCHESFASHION to shop a similar dress and add a regal touch to your wardrobe. Alternatively, get a look-alike for less by shopping a dress from the carousel which includes Tibi, Very, Golden Goose and more.

This is the second time in a month Kate has worn a dress by the New Zealand based designer, previously wearing a cobalt blue dress by Emilia Wickstead to attend the launch of the National Emergencies Trust at the beginning of November.

Kate joined the Queen in welcoming a host of NATO leaders to Buckingham Palace for the glitzy reception this evening.

Body language expert Judi James told MailOnline: ‘Despite having a companion in the car as she left to help the Queen host the NATO reception tonight, Kate’s body language meant she cut a slightly pensive and solitary figure without her husband William beside her.

‘It’s unusual to see Kate without her signature pitch-perfect smile in public but her rather distant gaze and her unsmiling expression suggested some tension or pre-event nerves.’

She added: ‘Kate’s poses at the function show her looking just as relaxed and delighted as her grandmother-in-law though, suggesting her co-hosting was a complete success.

‘Her eye-engage and her dimpled smile were back, and at one point she placed a hand to her chest and wrinkled her nose up to smile in a way that made her look happily uninhibited, showing genuine enjoyment and fun.’

Attendees tonight include the Queen, Prince Charles and Camilla, who will play host to President Trump and Melania Trump among other world leaders. 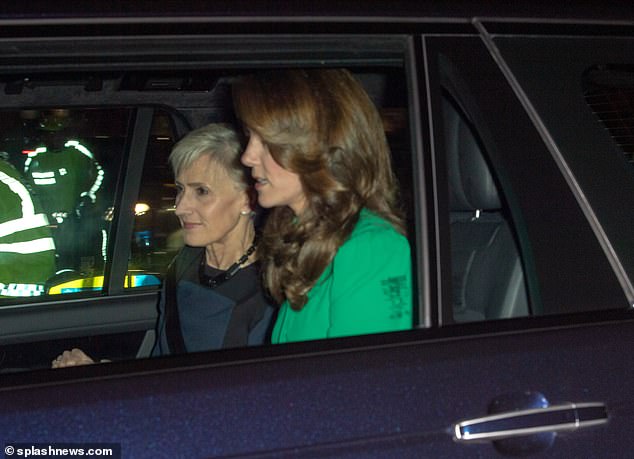 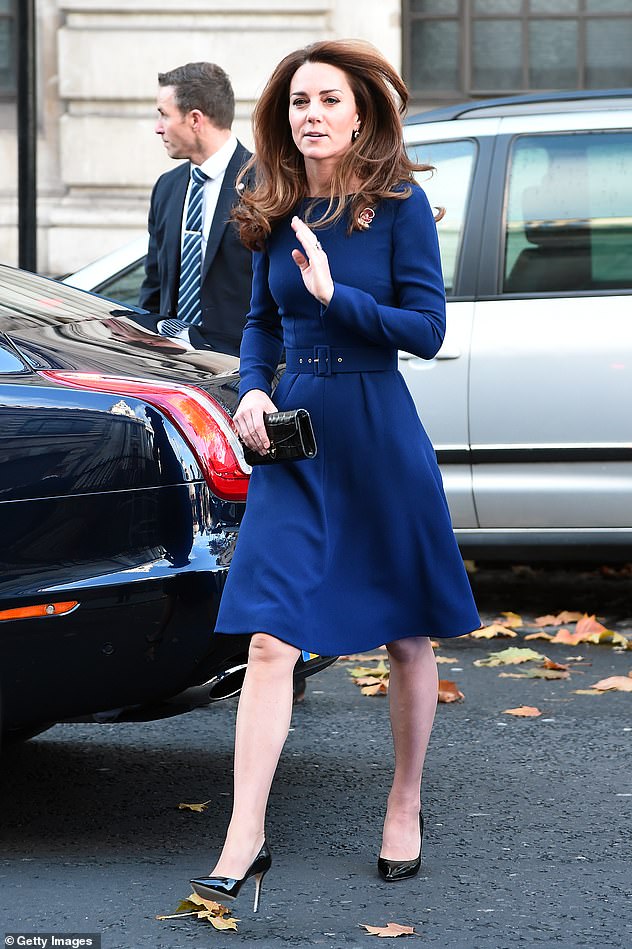 This is the second time in a month Kate has worn a dress by the New Zealand based designer, previously wearing a cobalt blue dress by Emilia Wickstead to attend the launch of the National Emergencies Trust at the beginning of November

This evening, world leaders started to arrive at Buckingham Palace, where they will be hosted by the Queen to mark 70 years of the Nato alliance.

The Queen, the Prince of Wales and the Duchess of Cornwall will formally greet NATO leaders at this evening’s reception, which marks 70 years of the alliance.

Charles and the Monarch will then join the politicians for a group photograph.

The royals will be out in force for the event, including the Duchess of Cambridge, the Earl of Wessex, the Princess Royal, the Duke and Duchess of Gloucester and Princess Alexandra.

Prince William is away in the Middle East, while Prince Harry and wife Meghan are on a six-week break from royal engagements over the festive period.

Prince Andrew, who stepped down from public duties after his disastrous Newsnight interview about his association with convicted padeophile Jeffrey Epstein, is also not attending. 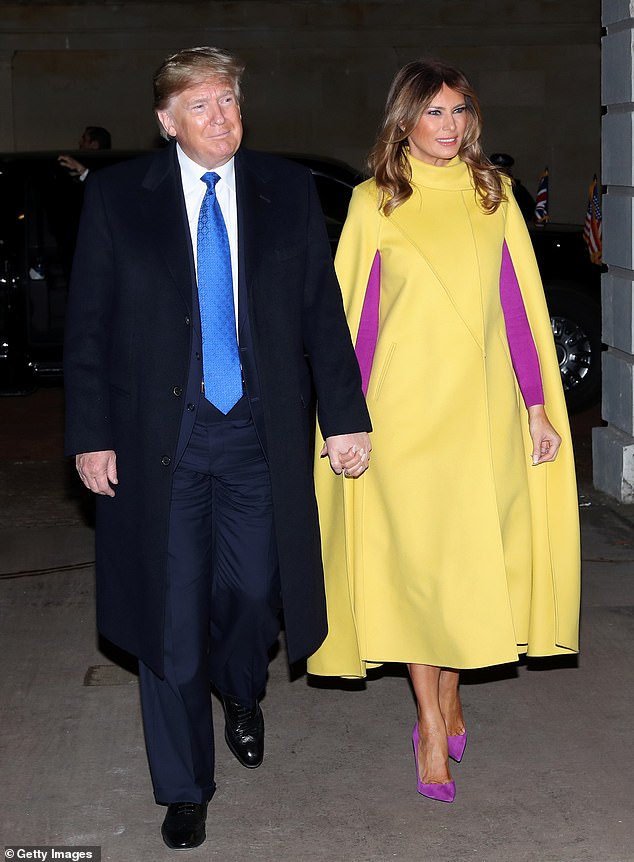 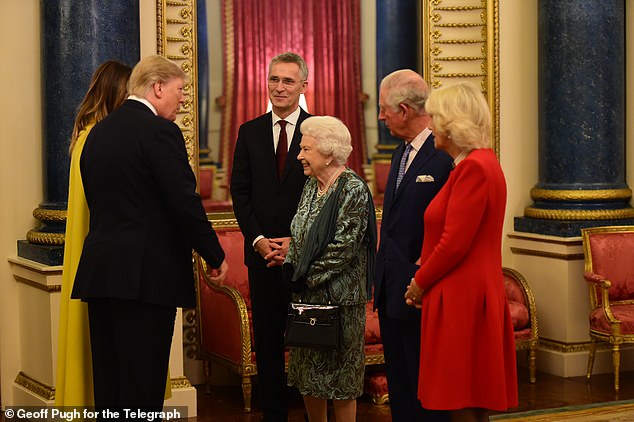 The Queen smiles as she greets Melania and her husband, with Prince Charles and Camilla on her left side and an official on her right 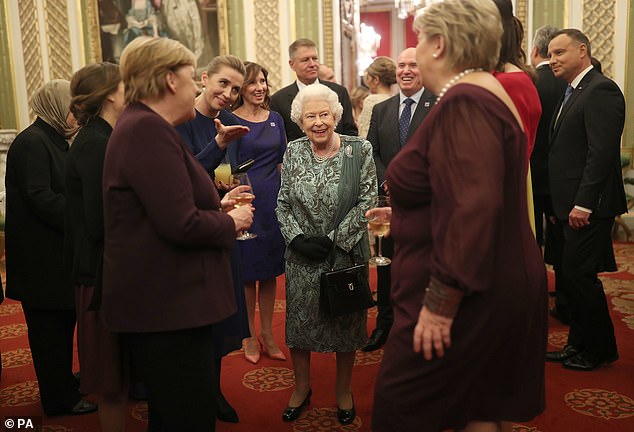