Move over Kate Adie. In terms of influencing a generation of female journalists, Julia Sawalha can make quite a claim for the crown.

Her first big acting role came in 1989 in the series Press Gang. She played Lynda, the fearless editor of the Junior Gazette.

Every female teenage wannabe writer wanted to be Lynda. What wasn’t to like? She was driven, with a sharp tongue, wild hair, dubious dress sense and attitude.

At the time Julia, now 51, was in her early twenties, older than the part, yes, but she would become famous for playing younger than she is. Her other iconic role was as teenager Saffy in Ab Fab (even worse dress sense here). 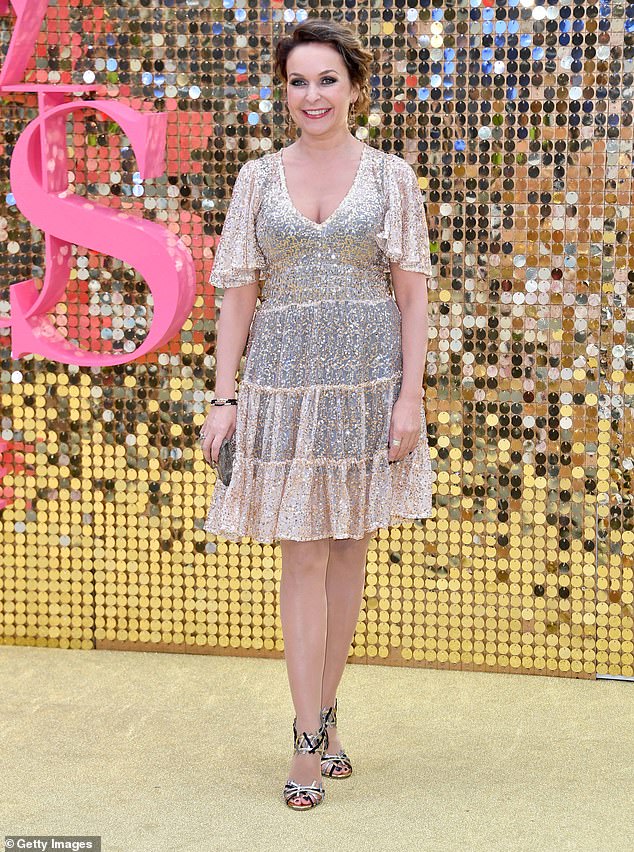 Julia Sawalha, 51, first big acting role came in 1989 in the series Press Gang. She played Lynda, the fearless editor of the Junior Gazette. The original series is returning to screens

The now grown-up fans of Press Gang will doubtless be cheering that the original series is returning to our screens as part of a lockdown revival of feelgood programmes.

Julia’s main memory of that series is how young she was – and how old the writer of the programme seemed. He was none other than Steven Moffat, who went on to write Sherlock and Doctor Who.

Press Gang was his first TV series. He was only 25 when he wrote it – although to Julia he was ancient.

‘He seemed about 50. He was barely older than me, but he was so clever and had this authority.

‘His writing was spot-on even then. With some writers, you find yourself stumbling and they just don’t work.’

She may have ended up in a relationship with the show’s heart-throb Dexter Fletcher in real life, but the sense is that this was a very professional operation rather than a load of kids hanging about.

‘I think the characters were supposed to be 15 or 16, but we were all in our early twenties.

‘In a way it didn’t matter because the storylines weren’t childish. It could have been written for any age.’ 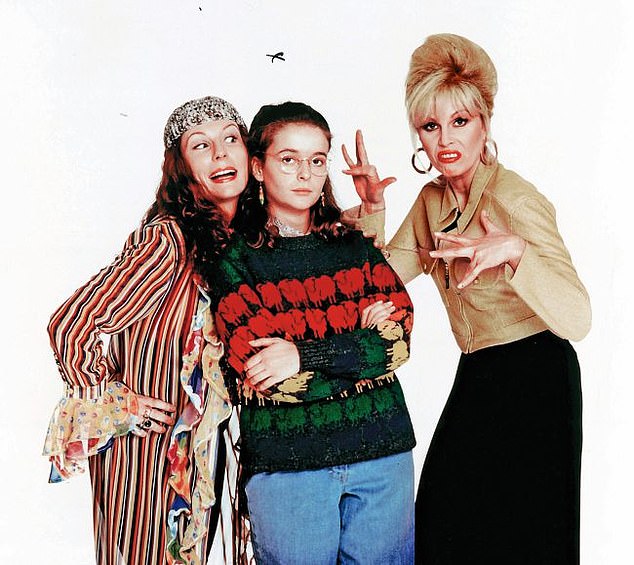 Julia as Saffy with Jennifer Saunders and Joanna Lumley in Absolutely Fabulous. Julia She was recommended for the part by Bob Spiers, a director on Press Gang who also worked on Ab Fab

On rewatching, what dates Press Gang is that there are no smartphones, no apps, no social media.

‘I think that’s what will be nice for kids to watch – adults too. A programme where there are no computers and people are talking to each other.

‘They’re actually going out into the street, talking, digging, fighting and loving – without technology.’

She’s ambivalent about the tech that perhaps defines our age. ‘I hate the pressure it puts on teenagers.

‘There’s a plot in Coronation Street at the minute about it and it breaks my heart. I know teenagers who’ve been bullied. My niece has.’

As Julia concedes though, we’d all be lost without technology now. Just before we speak she was in a makeshift recording studio (a cupboard, pretty much, with blankets draped over her) trying to record a voiceover at home.

She’d been due to move from London to Bath but her plans were halted by the Covid-19 crisis.

‘Now I’m just down the road from my parents, yet I can’t see them. We rely on Zoom. My mum said the other day, “What would we do without it?” 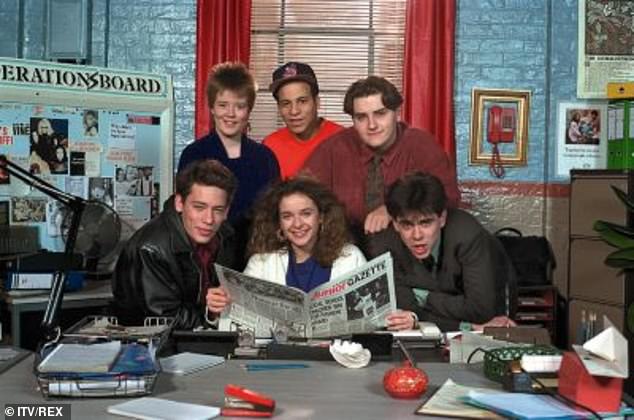 ‘Yet she grew up in the war. She spent the first years of her life in a bomb shelter in the garden.’

No mention of her sister Nadia, which is odd since Nadia, a panellist on Loose Women, lives next to their parents.

The relationship between the sisters has always been tricky. Nadia has, in the past, used the word ‘volatile’.

Competitive as children (their father Nadim was an actor and they both followed him into the industry), the two have always clashed, but things reportedly soured between the sisters when Julia and her then boyfriend (and Jonathan Creek co-star) Alan Davies attended Nadia’s wedding in 2002.

It was said that Alan took offence at images of them appearing in a glossy magazine. Nadia’s response was to call him a ‘miserable git’ and the sisters didn’t speak for two years.

It’s just my personality and I try to manage it. I’m happiest when I’m working, when I can be someone else, when I can be focused and not have to deal with it
Julia Sawalha

Periods of estrangement have followed. While both sisters are close to their eldest sister Dina, they clearly aren’t as close to each other.

‘We’ve always had periods where we don’t speak. I always say I have the best time or the worst time of my life with her,’ Nadia once said. ‘The culprit has always been men.’

Last year there was another eruption when Nadia addressed the subject of ‘toxic’ relationships in families on Loose Women, and Julia (who’s never really spoken out about this) felt she’d crossed a line.

On Twitter, she called Nadia out for publicly disclosing their ‘stormy’ relationship. ‘So tired of #nadiasawalha talking about our “stormy” relationship, which she created.

‘I’ve kept my privacy for six years to protect my family, while she talks lies and rubbish. You’ve destroyed our family, so don’t sit on TV with your fake tears to gain sympathy and attention.’ 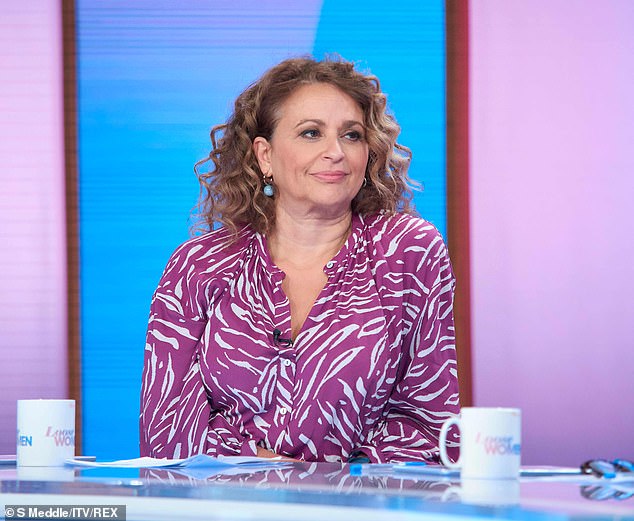 Last year there was an eruption when sister Nadia addressed the subject of ‘toxic’ relationships in families on Loose Women, and Julia (who’s never really spoken out about this) felt she’d crossed a line. Pictured, Loose Women panellist Nadia on the show

So how are things with her sister now? ‘I have a great relationship with Dina.’ Er, and Nadia? ‘Nadia and I are civil when we need to be, where the family’s concerned.’

With this the subject is promptly closed. Suffice to say those family Zoom meetings must be quite tricky.

She was recommended for the part by Bob Spiers, a director on Press Gang who also worked on Ab Fab.

She reveals she nearly didn’t get the role – because others involved, seemingly including Jennifer Saunders, didn’t see her in the part. ‘Jennifer and Jon [Plowman, the show’s producer] had come up with their own suggestions.

She did get the part, of course, and turned the character of Saffy into her own.

Since then, she has gone on to play ‘older’ parts, and some cracking ones too. She’s been in Jonathan Creek (her relationship with her co-star Alan lasted for two years), Pride And Prejudice and Lark Rise To Candleford. Yet she admits roles are not now as plentiful as she’d like. Do people still think of her as a teenager?

‘Within the industry, yes. I think it’s quite hard for people to think outside the box with me, that I’m a human being and I’m growing old!

‘The characters I’ve played have been very strident and ambitious and driven – and very few characters for women of my age are written like that.

‘It is changing, slowly, but there’s a tendency to think women our age aren’t very interesting. They are! But you have to ride that wave a bit. I look forward to playing mothers, grandmothers, all sorts of things.’

One of the few mother roles she has played brought an interesting on-screen daughter.

She can claim she recognised the talent of a young Jodie Comer – now wowing viewers as assassin Villanelle in Killing Eve – from the off when they were cast together in BBC drama Remember Me in 2014.

‘It’s amazing to see a career take off like that,’ says Julia, ‘but she was very much going places. Such a good actor, but also very grounded, a mucker-in, a grafter.’

Julia’s own ambition certainly hasn’t dimmed, nor her tendency to be tough on herself.

She admits she’s a complex character who lurches from deliriously happy to the depths of despair, and back again.

Her mum calls her ‘sunshine and showers’. It’s interesting that a woman so synonymous with grounded, stable characters isn’t like that in real life.

‘My best friend always says, “You’re so contrary.” Things are bright one minute and the next they’re not.

‘It’s just my personality and I try to manage it. I’m happiest when I’m working, when I can be someone else, when I can be focused and not have to deal with it.’

It? I think she means herself. ‘I’m very aware of it. And I have to be, because there are people around me who have to deal with it. So I have to keep a check on that.’

Such a personality does make relationships difficult, perhaps. She has a history of dating co-stars (as well as Dexter Fletcher and Alan Davies, she was with Keith Allen for a while in the early 90s) but she once said she’d never date an actor again.

She backtracks on that today. ‘I think I got the lines blurred. I’ve realised it’s not about the profession, it’s about the personality. I know actors who are with other actors and they have a wonderful relationship.’

She is seeing someone at the moment but only sort of – ‘There is someone in my life, on and off. We’re in each other’s lives.

‘Then out of each other’s lives’ – but she sounds like a woman who is no longer bothered about finding the happy-ever-after. It took a while to get to the stage of being happily single, though.

‘You think you’re going to be like your parents, and mine have a wonderful marriage.

‘They seem to fall in love more as the years go on. Then you have your own relationships and they turn out not to be like that.’

For seven or eight years, she says, she was single. Strictly through choice. ‘I think I’m quite good at it.

‘Yes, you miss having someone to give you a hug, but I like my own company, and it’s a real skill to get used to it. People used to say, “I don’t know how you can be on your own,” which I found enormously offensive!’

Now, she wouldn’t say she fears being ‘tied down’ exactly, ‘but I don’t necessarily want the responsibility’.

She says she always refers back to her father’s advice when it comes to any sort of relationship – perhaps tricky family ones too.

‘As my dad always says, a family should be like a central heating system. You shouldn’t have to sit on the radiator to keep warm. That’s what relationships mean to me. That’s what friendship means. We’re there when we need each other.’

Series one of Press Gang is available now on BritBox (watch on TV, phone or tablet, see britbox.co.uk).