A British woman who was married to an American man less than a year before he left her for someone else has been urged to stop all contact with him.

Posting anonymously on Reddit, the 24-year-old woman explained she spent five years in a long distance relationship with a 26-year-old man based in the US, who she would visit twice a year.

She said they were married for less than a year when he confessed he no longer had feelings for her and had met another woman.

‘He was a mess so I tried to push through the hurt and make sure he was okay. He said he wanted to be with me and regretted leaving me, and that he kept his ring on the whole time,’ she explained.

A flood of responses urged her to stop all contact with her husband and file for a divorce because his actions show that he doesn’t ‘respect’ her. 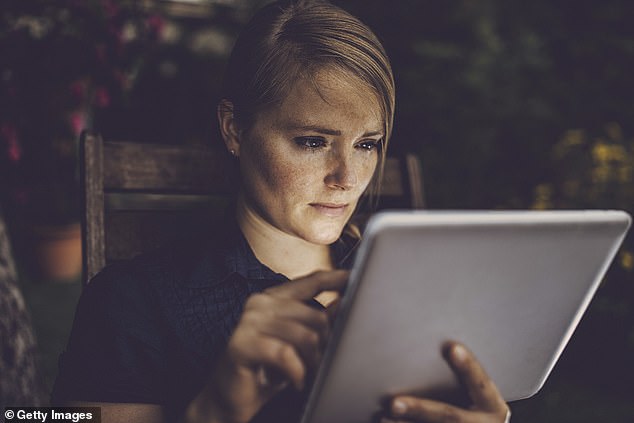 A British woman sparked a discussion about offering support to an ex, as she explained how her husband left her for someone else less than a year after they got married (file image)

In a heartfelt post, the woman wrote: ‘We haven’t even been married a year, that will come up this month. We were together for five years, long distance. It was an intense and extremely close relationship. I flew to see him twice a year from the UK to the States. 24F and 26M.

‘He left me four months ago because he lost feelings for me, and not even two months later he had fallen in love with someone else. I don’t think they’ve even met one another.

‘She is 8-9 years older than him. We were talking as friends for a little after he left, and one day he admitted he was in a relationship with her for a short while, but she had wanted to take a break.

‘He was a mess so I tried to push through the hurt and make sure he was okay. He said he wanted to be with me and regretted leaving me, and that he kept his ring on the whole time.

‘I assumed it was just a rebound and a silly crush he had and he was in his emotions because of everything going on.

‘I have been trying to be a good friend to him, supporting him, trying to make him smile and even letting him call me when he sleeps to soothe his anxiety. I felt like I could forgive a silly little crush and week long relationship with someone he hadn’t met. 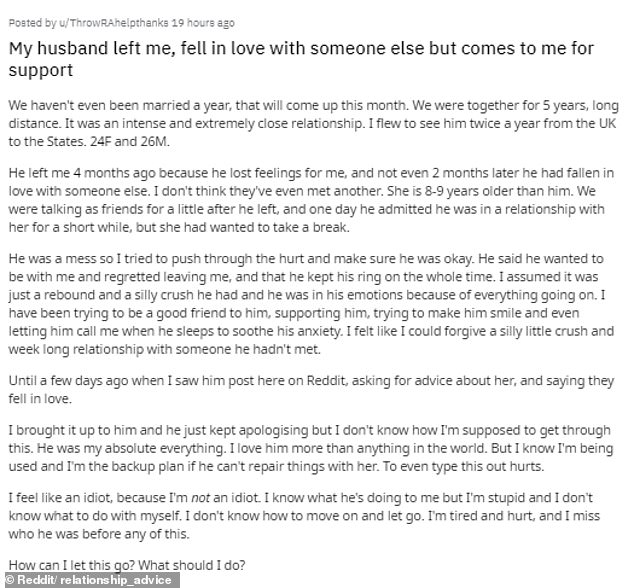 ‘Until a few days ago when I saw him post here on Reddit, asking for advice about her, and saying they fell in love.

‘I brought it up to him and he just kept apologising but I don’t know how I’m supposed to get through this. He was my absolute everything. I love him more than anything in the world. But I know I’m being used and I’m the backup plan if he can’t repair things with her. To even type this out hurts.

‘I feel like an idiot, because I’m not an idiot. I know what he’s doing to me but I’m stupid and I don’t know what to do with myself.

‘I don’t know how to move on and let go. I’m tired and hurt, and I miss who he was before any of this. How can I let this go? What should I do?’

A stream of responses told the woman to file for divorce and stop offering emotional support to her husband.

One person wrote: ‘He is now your ex. You don’t need to be his friend. In fact, remaining his friend right now will only prolong your hurt and sabotage your ability to heal and move on. Unfortunately what you need right now is distance from him.’ 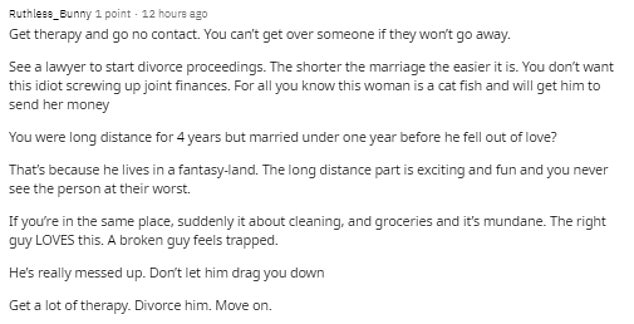 Another said: ‘File for divorce. Tell him you don’t care where he goes but he won’t be staying with you, that you cannot and will not be his friend and emotional supporter, so you are cutting him out of your life entirely. He has made his choice and now he has to live with it.’

Others suggested that the woman should give her husband a time period to make a decision if he’s going to permanently stop talking to the other woman or her.

‘You must give him an ultimatum that he has to decide now. Either your or her and if he chooses you, you must tell him to block her on everything and that you will try couple therapy with him to make it work. And he must be invested in that no but, if and so…

‘He must be completely done with her and then you will start the process of healing and working on the marriage,’ one wrote.

Another penned: ‘Tell him what you said here, that you love him but you can’t be there for him while he works on your replacement. So he has two choices you or her, one of you is gone from his life completely.

‘Tell him to make his choice before bedtime tonight. If you don’t hear from him by then you’ll assume he chose her and you’ll never speak to him again. You don’t do this to be mean but because it’s necessary for you to heal and move on one way or another.’

A third added: ‘Stop trying to be a good friend and supporting him. That is not a role you can fill in a way that is healthy for you.’