Jenna Bush Hager has opened up about how she and her twin sister Barbara used to babysit in the third grade while speaking to Baby-Sitters Club author Ann M. Martin about her beloved characters and where she thinks they would be now.

The Today star hosted the writer on her Today.com digital series Open Book with Jenna Bush Hager to talk about the series and its Netflix adaptation, which was renewed for a second season this week.

‘Ann, your books, I can’t even tell you what they’ve meant to me. They were the first series that my sister and I read compulsively,’ Jenna, 38, gushed. 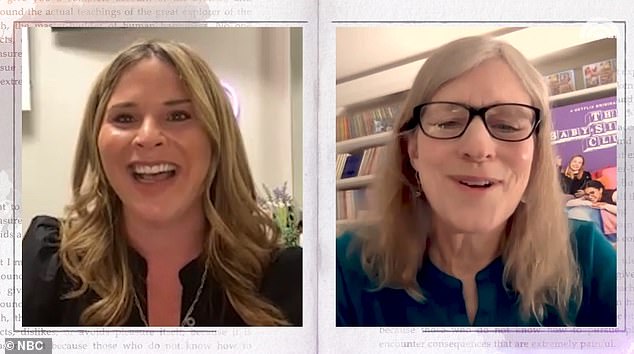 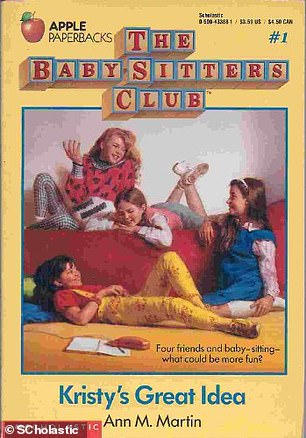 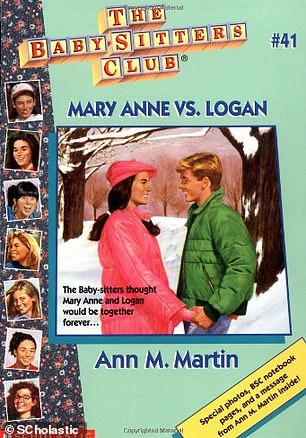 Candid: Jenna, 38, shared that she and her twin sister Barbara read the books ‘compulsively’ as children, saying they taught her about romance, friendship, and divorce

‘They taught me about how girls can be empowered to create whatever it is they want to create.’

Jenna said she and Barbara were so obsessed with the books that they started their own babysitters club in the third grade that was ‘kind of’ successful.

‘We were babies ourselves, but again, this was the late ’80s, so yes, I was a third-grader, babysitting,’ she recalled. ‘We sponge painted an old room at the back of our neighbor’s house and held meetings.’

The best-selling novels, published by Scholastic from 1986 to 2000, are centered around a group of friends who start a babysitting service in their fictional, suburban town of Stoneybrook, Connecticut, which they dubbed ‘The Baby-Sitters Club.’ 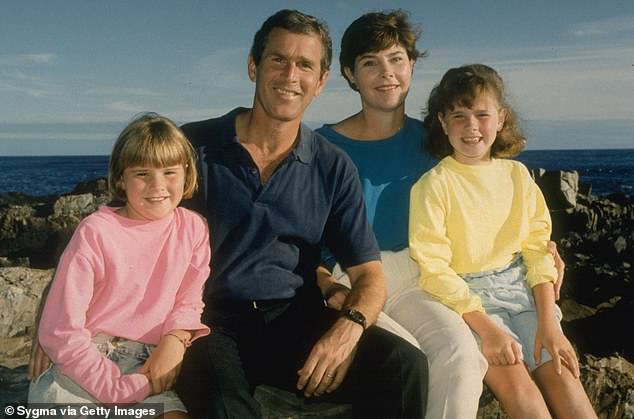 Say what? Jenna also revealed that she and Barbara started their own babysitters club when they were in third grade. ‘We were babies ourselves, but again, this was the late ’80s,’ she said 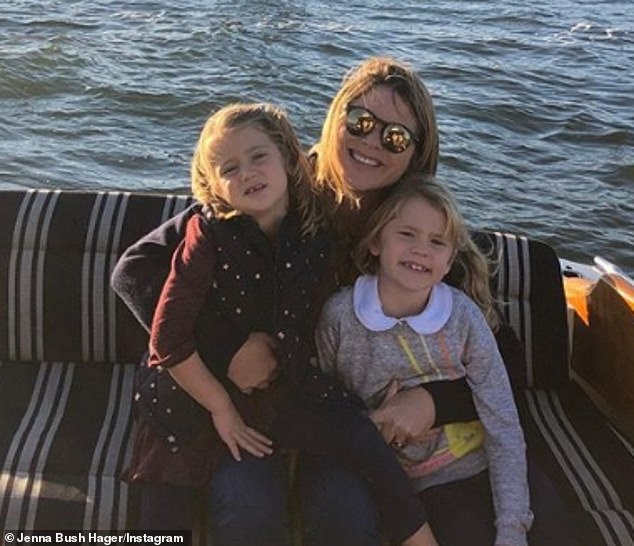 Next generation: Jenna said she’s passed down the books to her seven-year-old daughter Mila, and her five-year-old Poppy is a fan as well 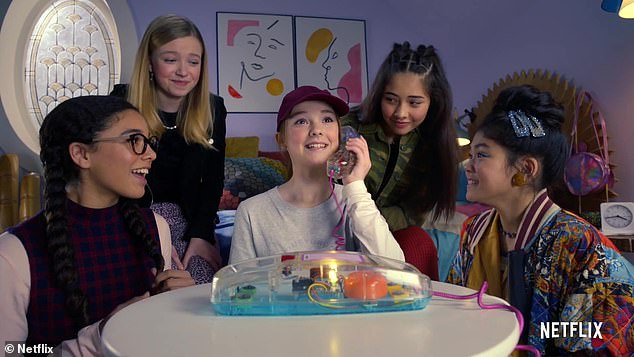 Modern update: Netflix’s adaption of the series was renewed for a second season this week

The stories are just as popular today, thanks in part to the new Netflix series, which opened up the world and its relatable characters to a new generation.

Jenna said she passed down the book series to her seven-year-old daughter Mila, and now both of her little girls are fans.

‘I have to tell you that during the quarantine, I watched my daughter, Mila, read these books for the first time, and I mean, I’m emotional speaking about it, because to share characters that you loved as a little girl, with a little person that you love with all of you, is one of the most magical things,’ Jenna said.

‘Last night, and I’m not kidding you, my husband was talking about diabetes, and Mila said, “What’s diabetes?” and Poppy, my five-year-old, goes, “You know what diabetes is, Stacey had it.”‘

‘I couldn’t believe, honest to goodness,’ the mom admitted. ‘And I think, this series, these books, tackle important themes that maybe, when I was a girl, you know, 30 years ago, were ones that were even somewhat risqué to discuss.’ 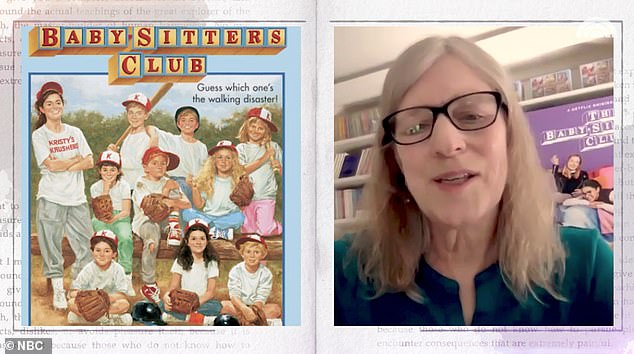 Idea maker: Ann opened up about where the characters would be today, saying Kristy would run something big like a non-profit 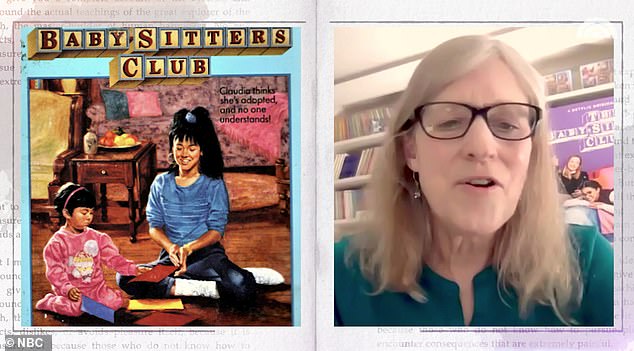 Looking to the future: Unsurprisingly, she thinks Claudia would do something with art

Ann said she had wanted to write about a group of friends ‘who each had her own set of problems or challenges. But who worked well together, who were best friends despite, you know, fights and disagreements.’

The series covers everything from divorce to racism, inspiring readers to write to Ann to suggest topics she could address in future books.

‘I didn’t want the books to be preachy, but I wanted to present these things,’ she said, adding: ‘We really wanted to bring that aspect of things into the Netflix show.’

On Wednesday, it was revealed that the series would be renewed for an upcoming second season.

‘We just found out, it’s very exciting,’ Ann said. ‘I’m so happy to be able to work, not only with the actors again, the group of girls, especially, who are playing the members of the club, but also the Netflix team. It’s just been a wonderful experience working with everybody.’ 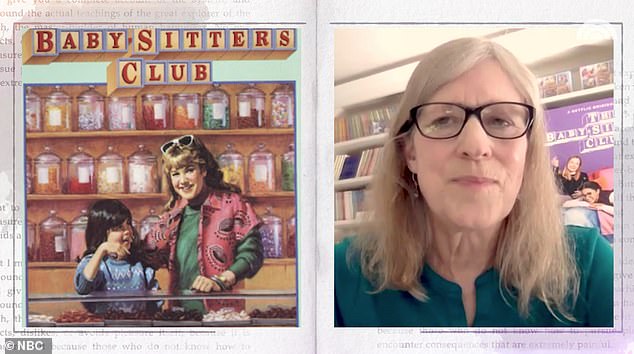 Fashion merchandising maven? Ann believes Stacey would work in fashion, possibly on the business side of things 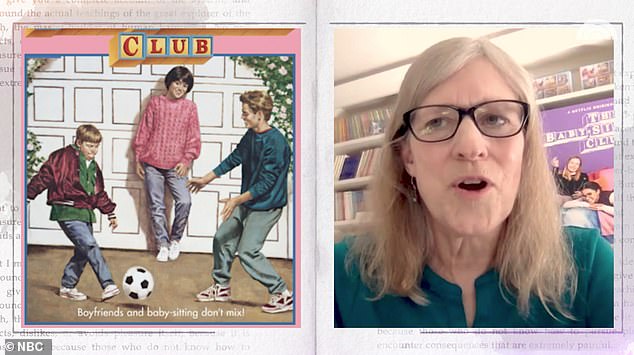 Homebody: ‘I think that perhaps Mary Anne stayed in Stoneybrook, and I see her possibly as a teacher,’ the author said 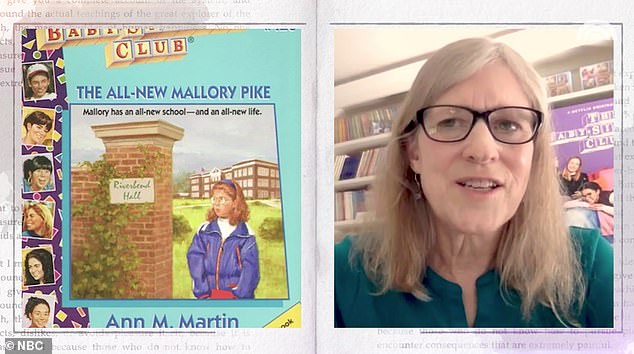 Meant to be: Ann believes Mallory’s dreams of becoming a writer came true

In both the books and the show, the characters are known for their distinct personalities and interests: Kristy is the bossy idea maker, Claudia is the junk food-loving artist, Stacey is the New York City-born fashionista, Mary Anne is the shy, serious one, and Dawn is the environmentally-conscious transplant from California.

Future junior officers Mallory, an aspiring writer, and Jessi, a ballet dancer, get their own plotlines later in the series.

Ann shared that her favorite character is Kristy, ‘simply because she set the whole series in motion,’ but she admitted she is actually shy and quiet like Mary Anne.

‘Mary Anne and Kristy were very much based on me and my best friend, Beth, when I was growing up,’ she noted.

The characters would be in their 40s right now, and Jenna couldn’t resist asking the author what she thinks they are up to as adults.

‘I see Kristy as probably being in charge of something. Perhaps I like to think that maybe she’s in charge of a big nonprofit, she’s running a big something,’ she said. 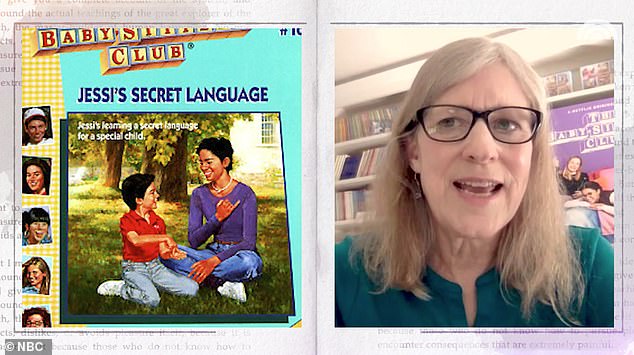 See it? The Baby-Sitters Club creator envisions Jessi being a dancer or choreographer 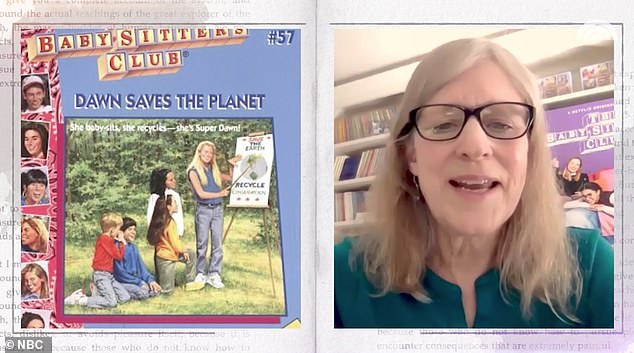 Fitting: ‘Dawn is out there, still trying to save the planet,’ she added. Ann said she has been approached to write about the characters as adults, but she doesn’t think she’ll do it

‘She could run the country. You know?’ Jenna interjected.

‘She could run the country, she absolutely could, it would be a big, daunting job but yes, she could do that,’ the author agreed.

‘I see Claudia doing something with her art, of course. And Stacey, probably something in fashion. But I also see her handling the business end of things,’ she continued.

‘I think that perhaps Mary Anne stayed in Stoneybrook, and I see her possibly as a teacher. I think Mallory grew up to become a writer. And Jessi, a dancer or maybe a choreographer. And Dawn is out there, still trying to save the planet.’

Ann revealed that she has been asked to write about the girls as adults, but she is not sure that she ever will.

‘I’ve never written for adults,’ she explained. ‘So, I’m not quite comfortable with that, I mean with writing for adults. So, I don’t know. I’ve been asked about it, and so far, I’m afraid I’ve said no.’