With her mesmerising stare and perfect features, she has become the breakout star of Lockdown 2. For while few people will have heard of Anya Taylor-Joy before now, her assured performance as fictional chess prodigy Beth Harmon in the Netflix hit The Queen’s Gambit has led to critics tipping the 24-year-old actress for wider stardom.

‘She’s the most sought-after young talent in Hollywood right now,’ a producer for Walt Disney Studios said last night. ‘Everyone wants her. She’s a once-in-a-generation talent. She’s not only a brilliant actress, she has such an utterly captivating, unique look.

‘She’s like a Japanese anime character made real; her beauty is otherworldly and has global appeal. There is no doubt she’s going to be a massive star.’

Her celebrated role in the UK’s latest binge-watching obsession is just the latest chapter in the intriguing history of an actress who has, arguably, managed her career with the same quiet stealth – and the occasional lucky break – of her scene-stealing character.

Named after the oldest opening move in chess, The Queen’s Gambit is the most watched programme in the UK on Netflix.

Set in 1950s and 1960s America, it charts the story of Beth Harmon, an orphan chess genius who rises to the top of the male-dominated game, while struggling with emotional issues and drug and alcohol addiction. 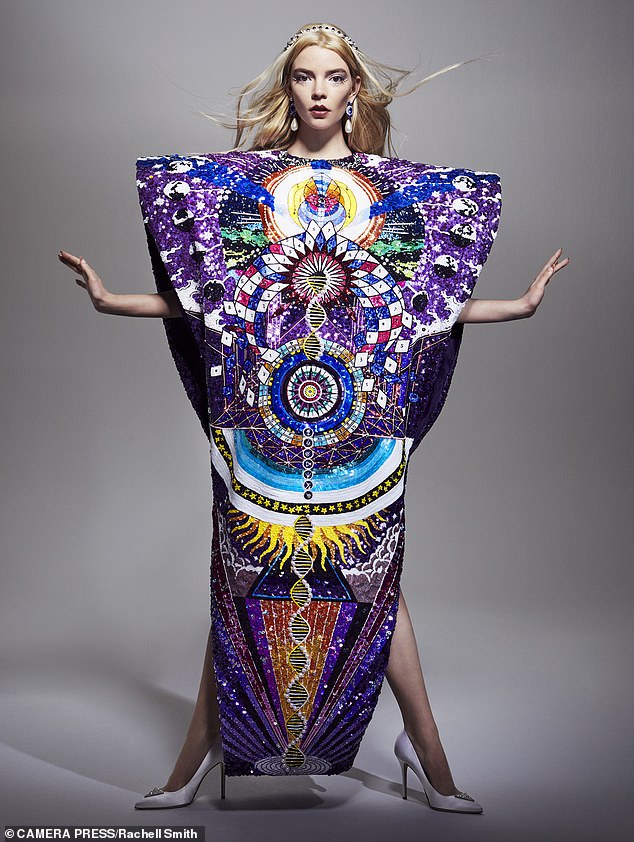 A producer for Walt Disney said last night: ‘She’s like a Japanese anime character made real; her beauty is otherworldly and has global appeal. There is no doubt she’s going to be a massive star’ 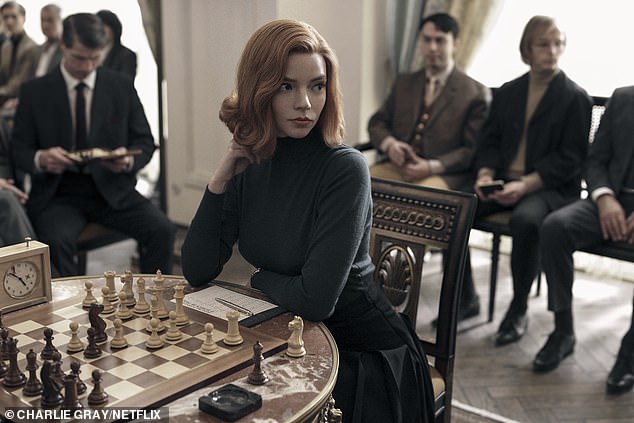 Anya Taylor as Beth Harmon in the Queen’s Gambit 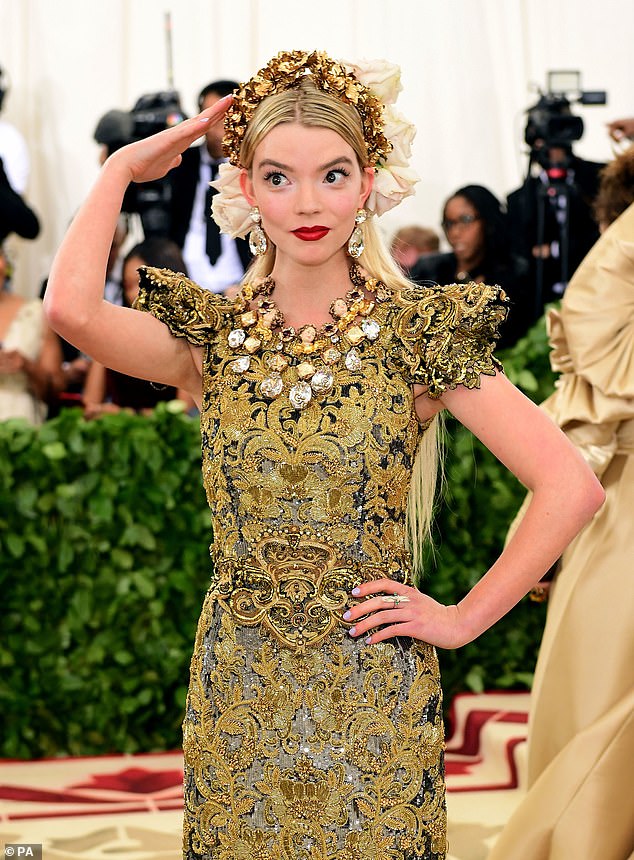 As well as serious themes, the seven-part series offers the escapism of glamorous locations – with tournaments in Las Vegas, Mexico City and Paris – and the delights of the period fashions that play such a key role in the storytelling.

But the programme’s beating heart is Taylor-Joy, whose personal story of dropping out of her London school aged 16 after being badly bullied mirrors, to some extent, the plight of the extraordinary character she depicts on screen.

And her bold sense of style is ever more eye-catching than her fictional alter ego.

Born in Miami, Anya is the daughter of a Scottish-Argentinian former world champion powerboat racer, and a Spanish-English psychologist whom Anya has described as ‘always laughing and dancing and very passionate about the world’.

She is the youngest of five siblings. Her nearest sister is seven years older and her oldest sister is in her 50s. Anya has described this as ‘having the best of both worlds’.

For the first six years of her life she was raised in Argentina until her family – whom she once called ‘nomadic, travelling gypsies really’ – moved to London.

At the time she did not speak a word of English, and in an interview last year revealed her struggle to adapt to her new home country.

‘Argentina is all green and I had horses and animals everywhere – all of a sudden I was in a big city and I didn’t speak the language,’ she recalled. 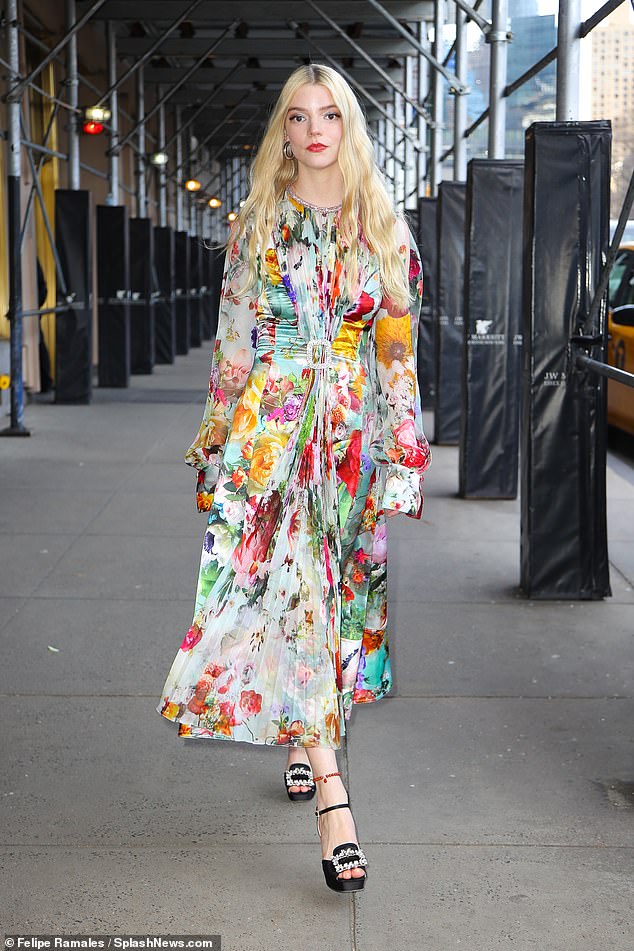 ‘I didn’t really feel like I fitted in anywhere. I was too English to be Argentine, too Argentine to be English, too American to be anything. The kids just didn’t understand me in any shape or form. I used to get locked in lockers.’

The effect, she said, was that she spent a lot of time in school ‘crying in bathrooms’.

She decided to move to New York at the age of 14, then gave up school two years later to pursue acting – a decision that ‘terrified’ her family.

But Anya got a lucky break very soon afterwards, back in London, when she was spotted by Sarah Doukas, founder of the prestigious Storm model agency who is also credited with discovering Kate Moss. Doukas, who describes Anya as brilliant and ‘incredibly intelligent’, recalls how she spotted her in Knightsbridge.

‘I was driving with one of my team from Storm and I saw a beautiful girl walking her dog,’ she recalls. ‘I remember thinking what an enigmatic, interesting face she had – a really great-looking girl.

‘My agent got out of the car to speak with her, and, quite rightfully, she was cautious at first and started walking away. Fortunately after a lovely chat, we persuaded her to come with her parents and meet us at Storm and we took her on.’ 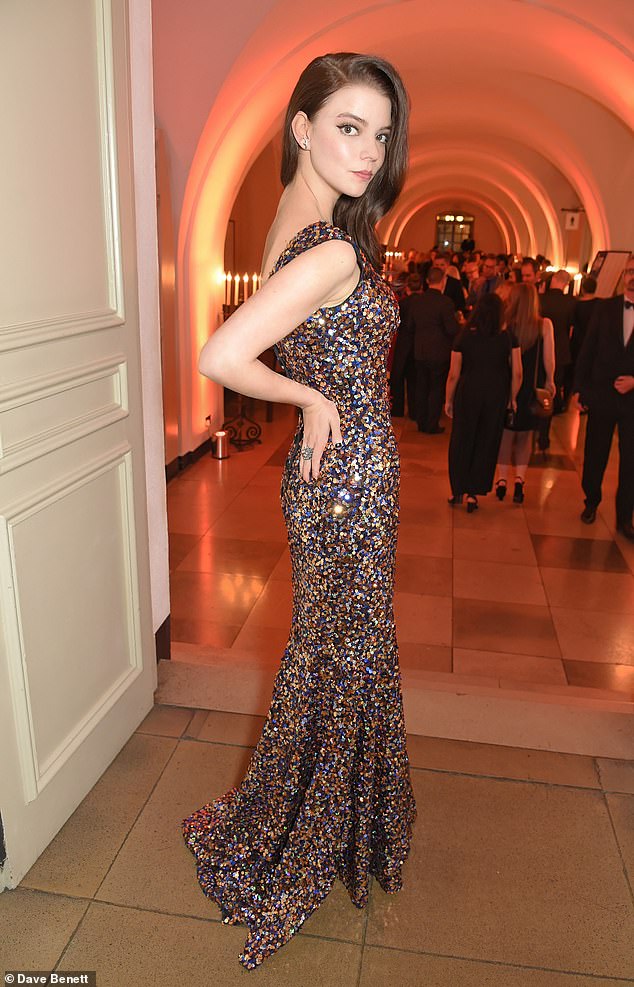 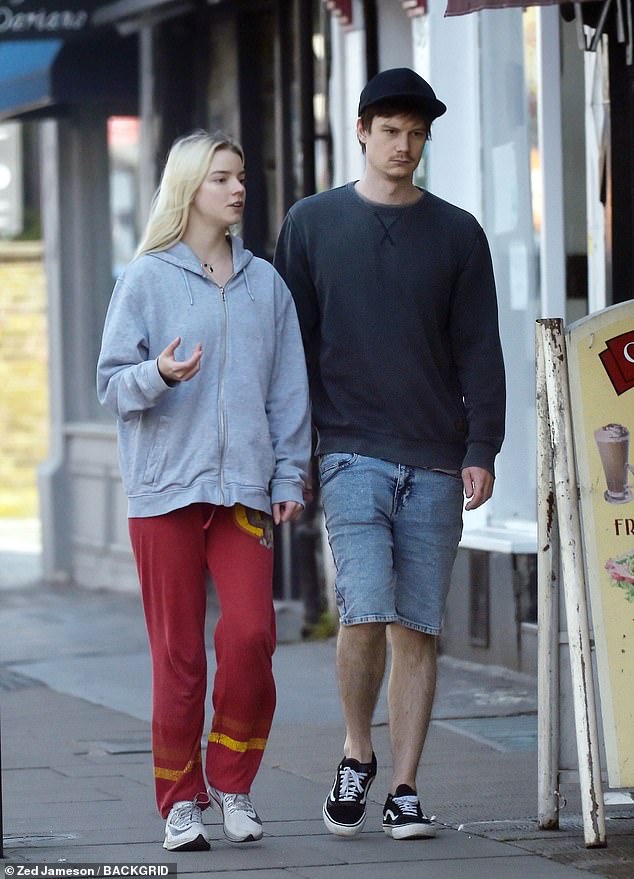 American born actress Anya Taylor-Joy and boyfriend Ben Seed pictured looking very casual while seen out and about in London during the Coronavirus Lockdown! 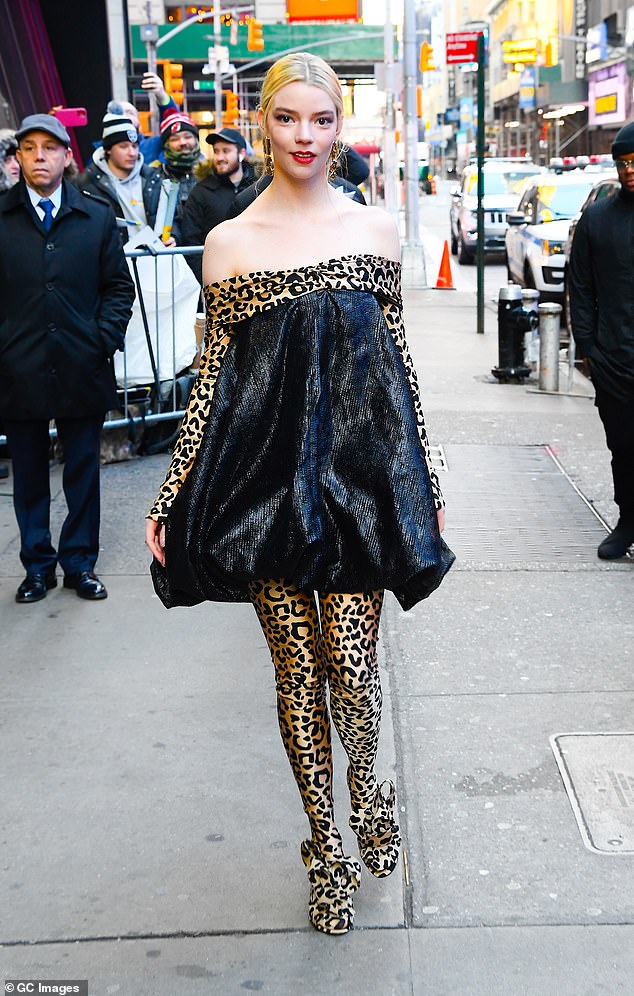 The pair got chatting during a photoshoot for Love magazine and Allen introduced the aspiring actress to his agent, who promptly agreed to take her on. Anya then landed a number of small roles, including one in a 2014 episode of the detective series Endeavour.

But it was her casting, aged just 17, as the lead in Robert Eggers’s 2015 period horror film The Witch that got critics talking, and which won her several awards.

She has worked steadily ever since, including a recurring role in BBC series Peaky Blinders and The Miniaturist, before earning a degree of wider fame earlier this year when she took on the title role in the movie remake of Jane Austen’s Emma – a character she recalled being attracted to because of her recalcitrant streak.

‘People have said that I was going after “undesirable” characters,’ Anya said in an interview with pop culture website The AV Club. ‘And I was like, “That’s why I’m picking them.” Because I root for them and I love them.’

It is no doubt the same reason she was drawn to the role of the complex and intense Beth in The Queen’s Gambit.

Hailed as a feminist icon on social media, Anya said in a recent interview that of all her characters, Beth is the one she has related to most, revealing that she devoured the 1983 Walter Tevis novel on which the series is based in 90 minutes.

‘Reading it, I was like, this hurts – but it hurts because I recognise it,’ she said. ‘I felt like I could really see myself in the pages and within the character.’

She admits, too, that the way Beth is catapulted into an adult world as an adolescent also resonated. ‘OK, what’s happened in the past six years of my life? I feel like I’ve done a lot of growing up during that time because I just didn’t have the space to understand what I was going through.

‘And I think with Beth, it’s kind of similar. She just keeps being thrown into situations where she has to grow to take the space, but not necessarily grow at the rate that she would if she wasn’t being pushed to grow that way. So, I understand Beth a lot.’

Despite huge success in her career, Anya’s romantic life has not been so easy. In an interview in Wonderland magazine, Anya revealed that ‘toxic relationships really affect you’ and said her confidence had been ‘skewered’ in the past.

Anya was once said to be engaged to Irish actor Eoin Macken, 13 years her senior, but is now dating photographer Ben Seed, known to friends as ‘Pip’.

Anya has had an ambition to act since the age of five. At seven she was asking her parents for an agent, and she made an impression in her first school performances.

‘Her teachers recall a girl who was very dramatic and that was clearly her passion,’ said William Townend, bursar of the £15,000 Hill House prep school, which Anya attended when she first arrived in London.

‘The girls all did a musical at the end of one of the years and she was certainly a leading light,’ he told The Mail on Sunday. ‘I would imagine it may well be where she got the acting bug from.’

While her time at Hill House is described as ‘fantastic’ by Mr Townend, Anya went on to struggle at the school she attended next, Queen’s Gate in South Kensington, whose ex-pupils include Nigella Lawson and the Duchess of Cornwall. 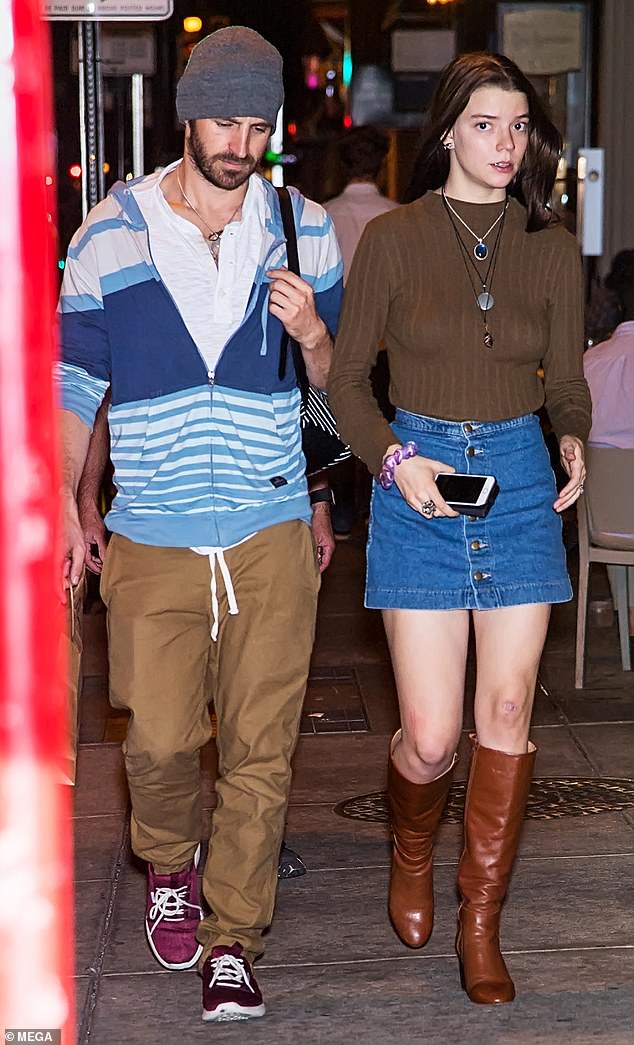 By the time she was studying for her GCSEs, she was being home-schooled after what she describes as ‘a few mental-health hiccups’, but she was also on the verge of making inroads on the career she had set her heart on since she was a young girl – and which now seems to be reaping rewards.

Her powerhouse performance in The Queen’s Gambit means she is already being tipped for awards at next year’s Emmys and Golden Globes. Caroline Framke, of Hollywood trade newspaper Variety, described the performance as ‘so magnetic that when she stares down the camera lens, her flinty glare threatens to cut right through it’, while the LA Times dubbed her ‘mesmerising’. ‘Her visage is like a silent movie star from the 1930s,’ director M. Night Shyamalan has said. ‘She is so atypical physically and emotionally.’

While praise is being lavished on her Queen’s Gambit performance, Anya is already on to her next projects.

She stars in Shaun Of The Dead director Edgar Wright’s new horror movie, Last Night In Soho, which is out in April, and she has been filming opposite Nicole Kidman in The Northman, a ‘Viking revenge movie’ set in Iceland at the turn of the 10th Century.

There is talk, too, of a Queen’s Gambit sequel, despite the series having a clear resolution.

It’s a demand that Anya herself has not dismissed.

‘If I’ve learned anything from being in this industry, it’s never say never,’ she says.

‘I would certainly come back if I was asked to.’