A spiritual author known as the ‘Angel lady’ challenged Holly Willoughby and Phillip Schofield to make contact with their inner unicorns on This Morning today – and asked viewers at home to join in the surreal session.

Diana Cooper evangelises about making contact with a positive inner unicorn after a she had a visit from her own, Elfrietha, 12 years ago, something she admits was ‘bit of a shock’ at the time.

Appearing on the ITV daytime show today, Ms Cooper told hosts Holly and Phil, who was particularly cynical about being able to use his ‘third eye’ to find the unicorn, that the mystical creatures use their horns to illuminate lives, heal souls and pour light into the world. 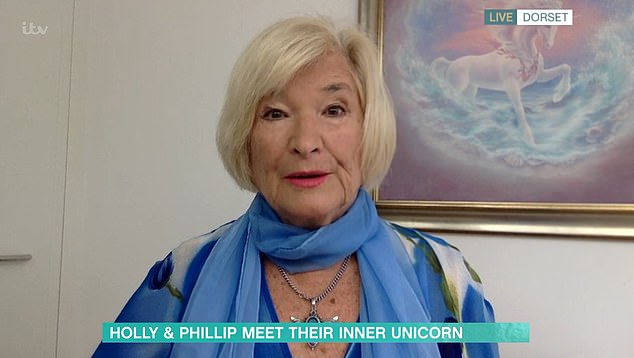 Diana Cooper says she had a visit from her own unicorn, Elfrietha, 12 years ago, and now evangelises about their power for positivity 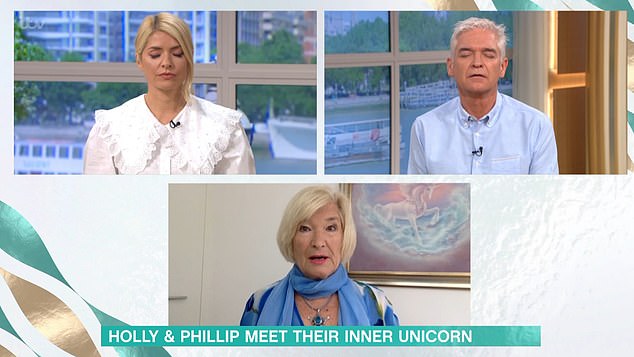 Holly and Phillip close their eyes and listen to Ms Cooper’s soothing words as she urges them to ‘see’ the unicorn, name it and even stroke it 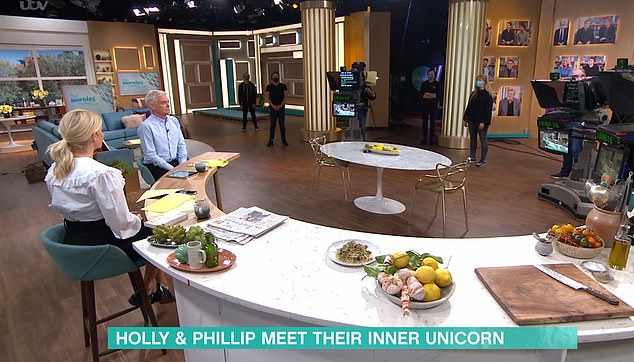 So convinced of unicorns being a force for good on the human race, Ms Cooper says the current onslaught of unicorn merchandise is deliberate, so people consider the fictional horned characters more deeply.

She told the programme: ‘They are literally touching anyone who is ready, they’ve used all these cups and t-shirts to get in touch. When you think about a unicorn it starts to connect.’

Over several minutes, Ms Cooper asked the show’s presenters, and surrounding crew, to listen to her soothing words with their eyes closed.

While Phillip admitted he was unmoved by the experience, Holly said sh had in fact seen a unicorn before her when Ms Cooper had asked her to see it.

However, she followed up with: ‘If you’d have asked me to see an armadillo, I would have seen that.’ 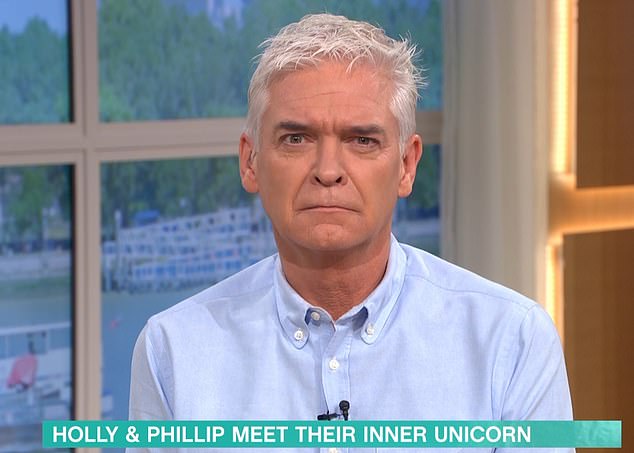 Not convinced: Phillip kept his eyes open throughout and admitted that he hadn’t felt ‘a lot’ during the Angel lady’s session live on air 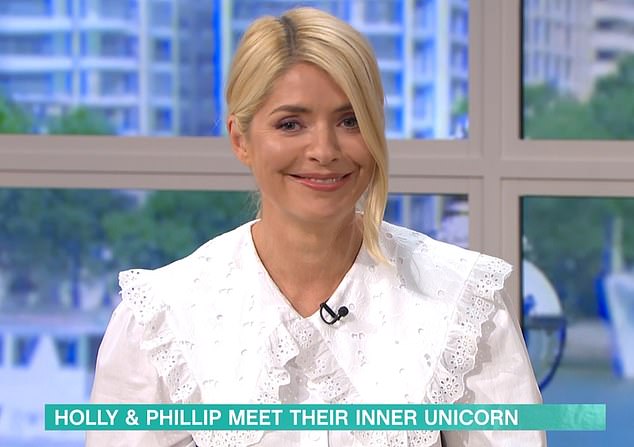 At times the presenting duo looked to on the verge of getting their famous giggles.

At home, plenty were convinced by Ms Cooper, however, and said they’d not only seen the unicorn but also named it and even stroked it.

Former pop star Chesney Hawkes said: ‘I found my inner unicorn with @hollywills and @schofe #ThisMorning. His name is Greg.’

Others praised the programmed for embracing more surreal features in a world dominated by Covid-related news.

@Marie_MM16 wrote: ‘I love this morning for this type of thing. Just when the world is so serious they want you to channel your inner unicorn. Priceless!’