Hoda Kotb has opened up about trying to adopt her third child, admitting she never intended to publicly reveal that she and her fiancé Joel Schiffman had completed the paperwork to start the adoption process.

The Today co-anchor was a guest on The Drew Barrymore Show a few weeks ago when she confirmed the exciting news, but it turns out that she had just gotten caught up in the moment.

‘You know what’s funny? I don’t know why I said that — even though it’s true,’ Hoda, 56, told DailyMail.com. ‘It was one of those moments where you’re having a vulnerable moment and you’re like, “Yeah, I did do that.”‘ 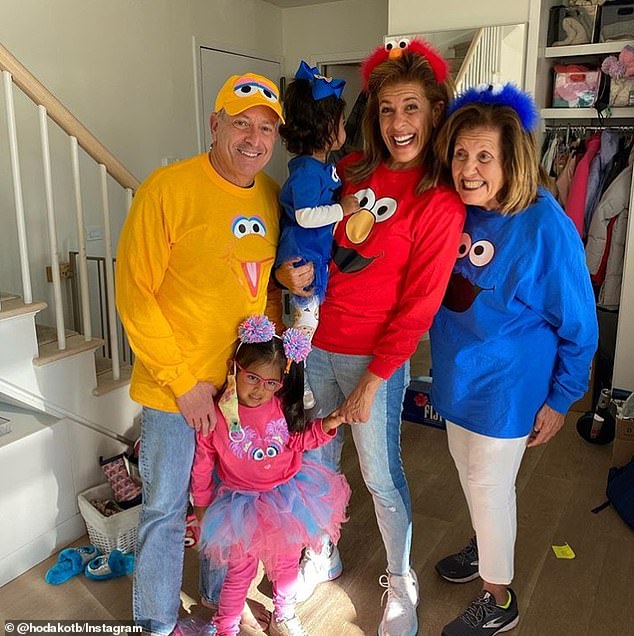 More to love: Hoda Kotb, pictured with her family on Halloween, told DailyMail.com that she and her fiancé Joel Schiffman are hoping and praying to adopt a third child together 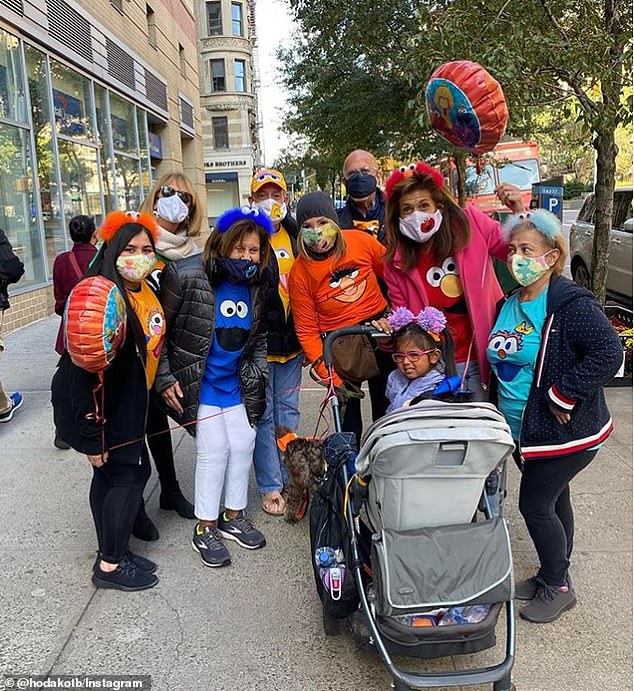 Family: Hoda, 56, and Joel, 62, have two adopted daughters: Haley, three, and Hope, one. The financier also has a 26-year-old daughter Kyle (not pictured) from a previous relationship

The journalist and her longtime partner have two adopted daughters together: Haley Joy, three, and Hope Catherine, one. Joel also has a 26-year-old daughter Kyle from a previous relationship.

‘Sometimes I do think speaking something out loud sort of wills it into existence, weirdly,’ Hoda said of her wish to grow her family.

‘You know, it’s almost like if you have a secret desire or dream you can even just whisper it. And if you do, there’s a chance you’re just giving it validity.

‘And, [then] again, you don’t want to say something out loud because what if it doesn’t happen,’ she added.

‘We don’t know what will happen. I mean, we hope, we pray, we want it to, and we feel like we have enough love and room. You know, so far, our family is just getting better.’

While Hoda maintained she hadn’t ‘consciously thought’ about opening up about her adoption plans, her co-host Jenna Bush Hager said she knows why she did it.

‘She’s an open book and authentic and transparent,’ she told DailyMail.com during the joint interview. ‘Watching her family grow over the last three, four years has been one of the most beautiful things to witness as her friend, and so that’s why she said it. Because she can’t help but share her heart.’ 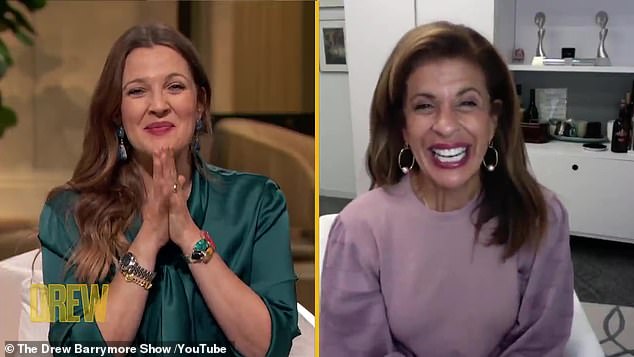 Exciting news: A few weeks ago, Hoda confirmed on The Drew Barrymore Show that she and Joel have completed the paperwork to start the process of adopting a third child 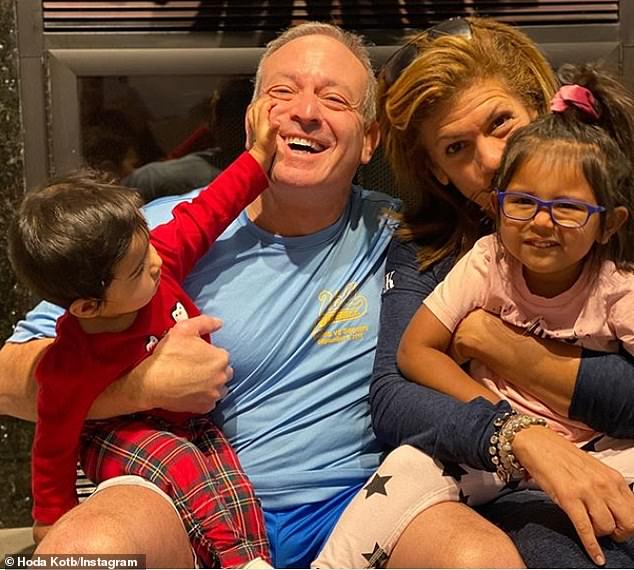 Whoops! Hoda admitted that she had gotten caught up in a ‘vulnerable moment’ and never intended to publicly share the exciting news

Jenna, 38, has three children of her own — Mila, seven, Poppy, five, and Hal, one — and she has spoken to Hoda about what special gift it is to watch your children love each other.

‘Now she’s seen it. She’s seen Haley give Hope a hug and hold hands and reach for each other and say “sissy,”‘ the former first daughter said. ‘Watching that love is one of the best gifts in life.’

Hoda and her family celebrated Halloween on Saturday by dressing up as Sesame Street characters and walking around their block singing ‘Sunny Days.’

She explained that they call got tested for COVID before her mother, Sameha Kotb, arrived as a safety precaution. The proud mom shared photos from the day, including a picture of her and her family members posing on the street wearing face masks.

Hoda told DailyMail.com that her youngest daughter Hope now knows what a mask is, explaining that it was one of her first words thanks to the coronavirus pandemic.

‘My daughter Hope knows about five words,’ she said. ‘She knows mama, dada. She knows her sister’s name. She knows a few other things, you know, hi, goodnight —and she knows mask.’ 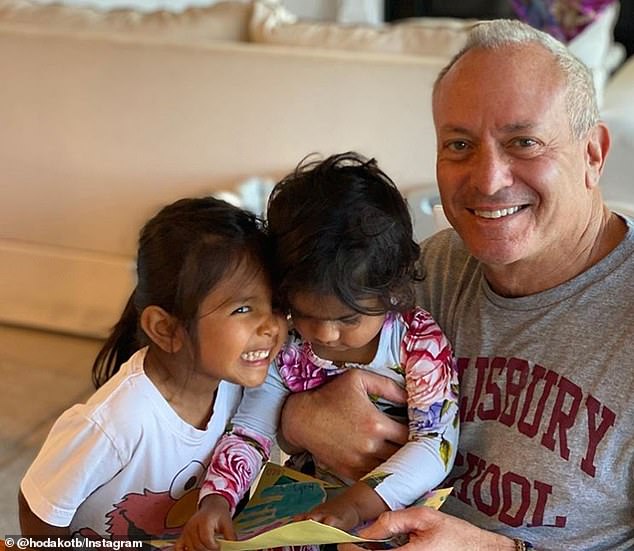 Lots of love: Hoda said they don’t know what will happen, but their ‘family is just getting better’ 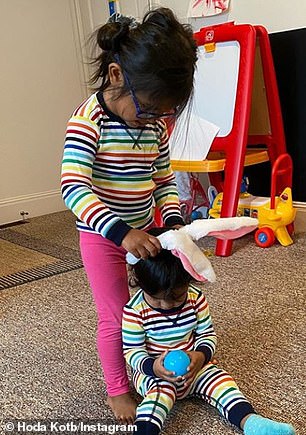 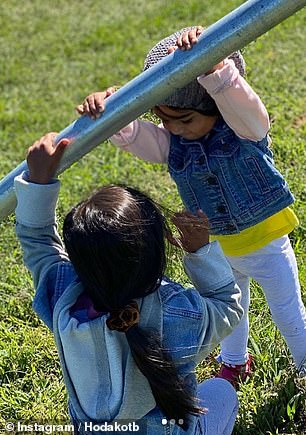 Out of the mouth of babes: Hoda said her youngest daughter Hope now knows what a face mask is, explaining that it was one of her first words thanks to the coronavirus pandemic 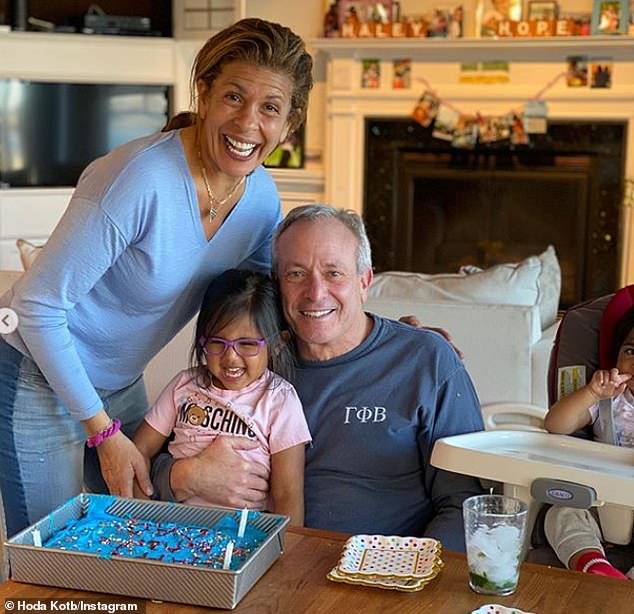 Looking back: ‘Our kids are seeing pictures of us before we wore masks and wondering what was going on,’ the journalist noted

‘She literally goes, “Mah.” I go, ‘What is she talking about?”‘ Hoda recalled. ‘She literally wanted a mask herself. It shocked me to think that in 2020 our kids’ first words would be “mask.”

‘And I think she’s ticked that she doesn’t have one and she’s too little for it,’ she added. ‘Literally, our kids are seeing pictures of us before we wore masks and wondering what was going on.’

Hoda, who was diagnosed with breast cancer when she was 42 years old, came out of treatment unable to conceive and believed for a long time that motherhood just wasn’t in the cards for her.

However, a decade later, the Today host began considering adoption — an idea that she decided to discuss with her then-boyfriend Joel.

The financier was immediately on-board, and Hoda revealed that his enthusiastic reaction moved her to tears.

‘I am lucky that I have an incredible life partner who was so supportive and so open to it,’ Hoda told DailyMail.com in 2018.

Hoda was 52 years old when she and Joel adopted Haley in February 2017, making her a mom for the first time. Two years later, they welcomed Hope in April 2019.