Princess Margaret is surely the role Helena Bonham Carter was born to play. And soon she will be on screen as the Queen’s sister in The Crown.

Pictures released this week by Netflix show Helena, 53, looking fully at ease under a replica tiara, opposite Oscar-winner Olivia Colman as the Queen.

Helena replaces Vanessa Kirby in the series, which will cover events from 1964 to 1977, and be screened from November. 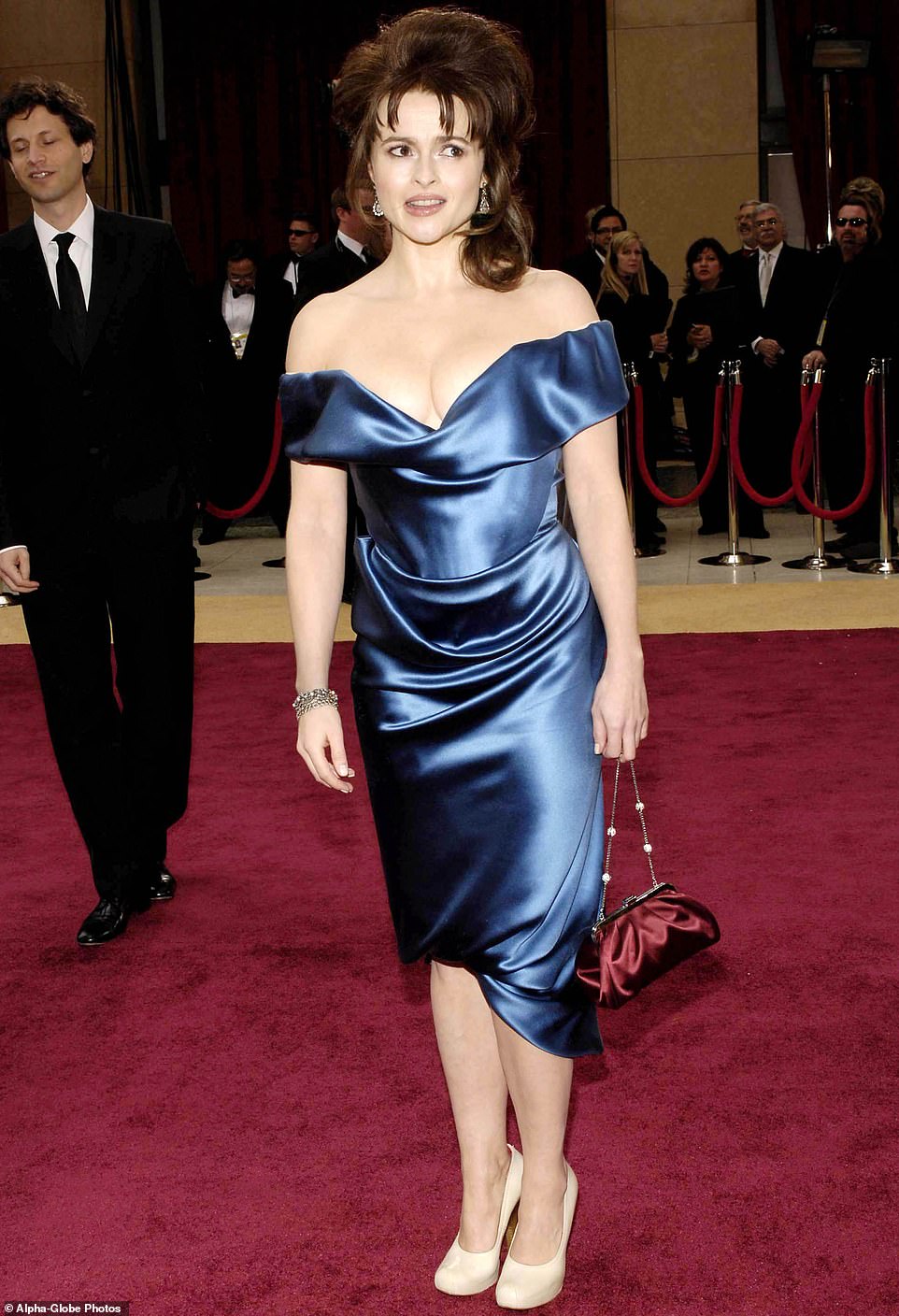 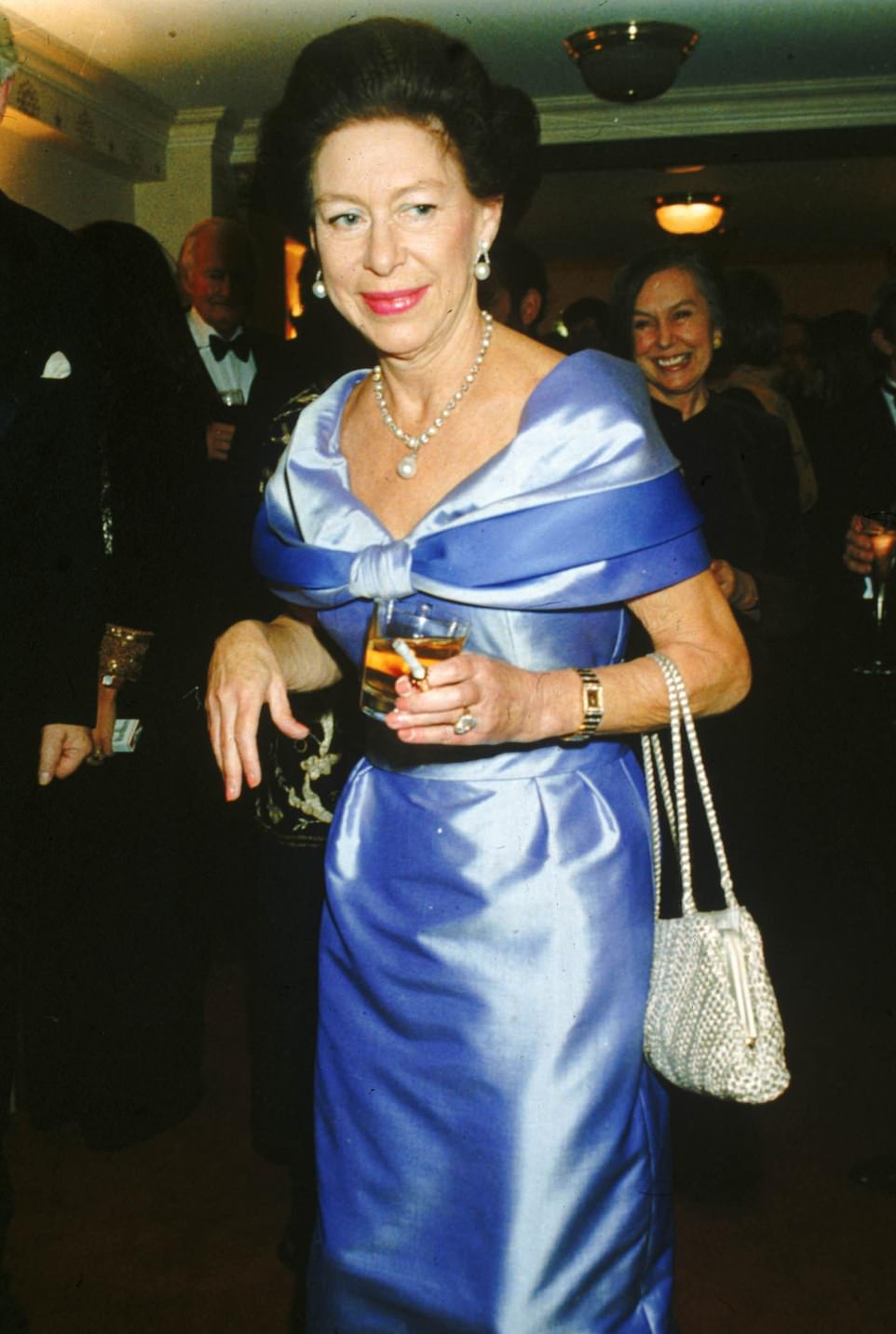 What unites well-connected Bonham Carter with her royal doppelganger? Superficially there is so much — a handspan waist, skin as pale as cream, and eyes which radiate a dangerous mischief.

Party-loving Princess Margaret — for decades the showbiz wing of the House of Windsor — was just 5ft 1in, and Bonham Carter is a mere half inch taller (she sighs over her short legs in interviews).

Both developed a quirky personal style which is sometimes celebrated and sometimes derided. They share a love of hats, gloves, dark glasses and diamonds — and big hair. More significantly, both have suffered a succession of failed love affairs, and bitter heartbreaks. ALISON BOSHOFF has the story of the ties that bind…

THE DOOMED romances with MARRIED MEN

Princess Margaret’s heartbreak over Group Captain Peter Townsend — the married equerry whose love she had to renounce — is well known.

Helena Bonham Carter has also had cause to bitterly regret her entanglement in her 20s with a married man, actor Kenneth Branagh. Branagh divorced wife Emma Thompson after he and Helena fell for each other on the set of the film Mary Shelley’s Frankenstein in 1994, but the romance was fraught and complicated, and came to an end in 1999.

Emma Thompson, who married actor Greg Wise in 2003, said that she had drawn on the heartbreak of the situation when playing the famous scene in Love Actually where she discovers her husband has cheated on her.

She said: ‘That scene where my character is standing by the bed crying is so well known because it’s something everyone’s been through. 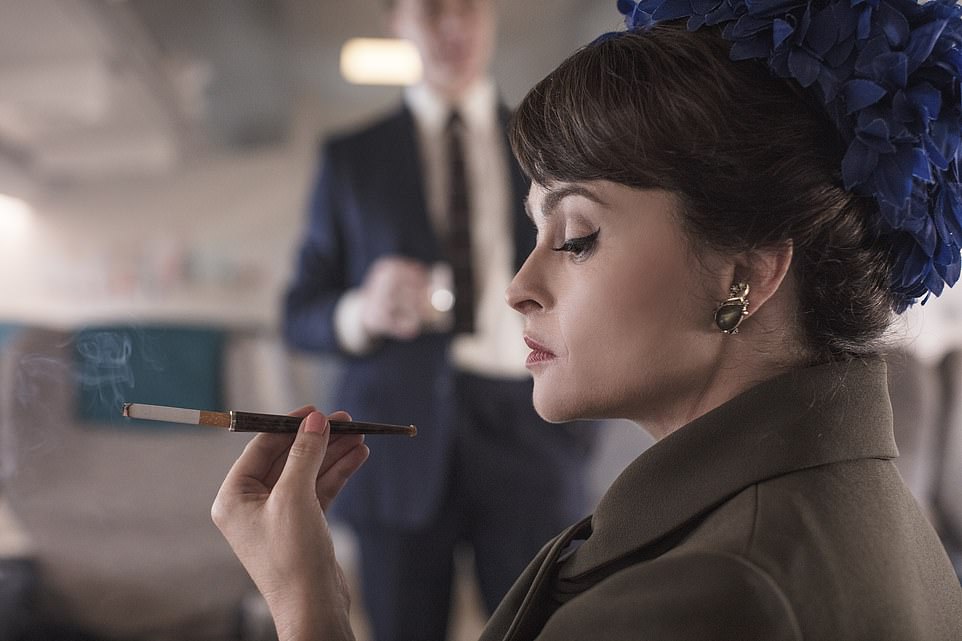 The pair have also both been in doomed romances to married men. Princess Margaret suffered heartbreak over group captain Peter Townsend while Bonham Carter was entangled with married actor Kenneth Branagh in her 20s. (Pictured: Bonham Carter smoking a cigarette while she plays Princess Margaret in the new Netflix series, that hits screens in November) 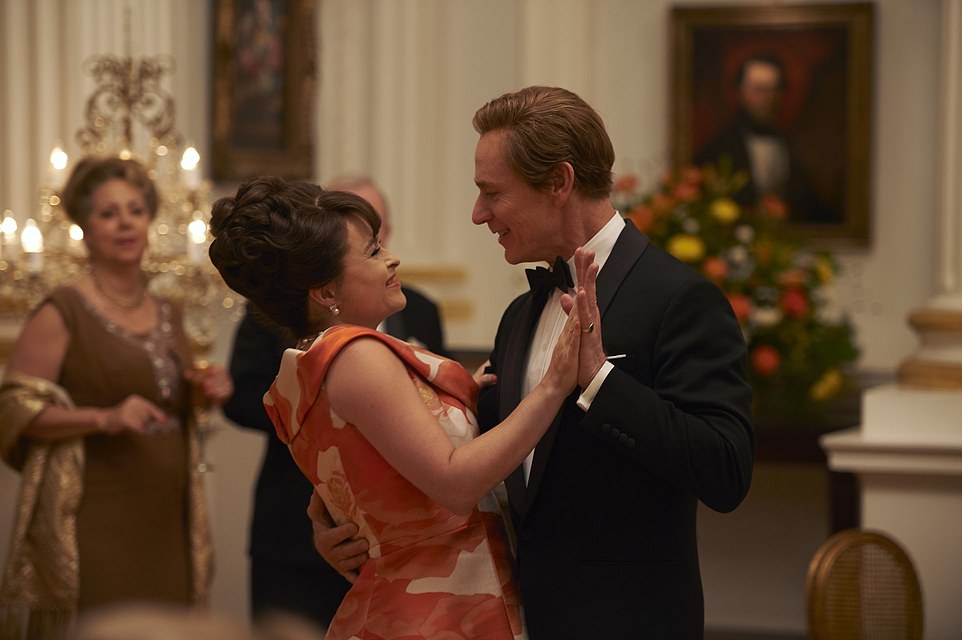 Peter Townsend divorced his first wife in 1953 and asked Princess Margaret to marry him. After waiting for two years, Margaret decided not to marry him and later got engaged to Anthony Armstrong-Jones. (Pictured: Bonham Carter dancing in the new Netflix series that is out this November)

‘I had my heart very badly broken by Ken. So I knew what it was like to find the necklace that wasn’t meant for me.’ In another interview she said she had made peace with Helena.

She said: ‘You can’t hold on to anything like that. It’s pointless. I haven’t got the energy for it. Helena and I made our peace years and years ago.’

In 1953, Peter Townsend divorced his first wife and asked Princess Margaret, then only 22, to marry him. She accepted — but the Queen asked her to wait a year so that she could complete a post-Coronation tour of the Commonwealth.

For two years, the scandal dragged on with Prime Minister Winston Churchill arguing that Margaret should be removed from the line of succession.

A proposal was produced to this effect which would have allowed her to keep her royal title, duties and civil list allowance.

But shortly afterwards, in October 1955, Margaret — who died in 2002, aged 71 — issued a statement which ran: ‘I would like it to be known that I have decided not to marry Group Captain Peter Townsend. I have been aware that, subject to my renouncing my rights of succession, it might have been possible for me to contract a civil marriage. But mindful of the Church’s teachings that Christian marriage is indissoluble, and conscious of my duty to the Commonwealth, I have resolved to put these considerations before others.

‘I have reached this decision entirely alone, and in doing so I have been strengthened by the unfailing support and devotion of Group Captain Townsend.’

A PENCHANT FOR TOY BOYS

The Princess scandalised the world by taking handsome landscape gardener Roddy Llewellyn, 17 years her junior, as a lover in the mid-Seventies. The Princess was introduced to Roddy in 1973 on Mustique by Colin Tennant. In 1976 a picture of the pair in their swimsuits was published and soon after she and Lord Snowdon acknowledged that their marriage was over. They were divorced in 1978.

Helena Bonham Carter is dating a Danish writer, Rye Dag Holmboe, who is 21 years younger than her. The two of them are thought to have met at a mutual friend’s wedding over the summer of 2018 and have been an item since October of that year. This May they were seen hugging and kissing in New York on a romantic getaway to celebrate her birthday. 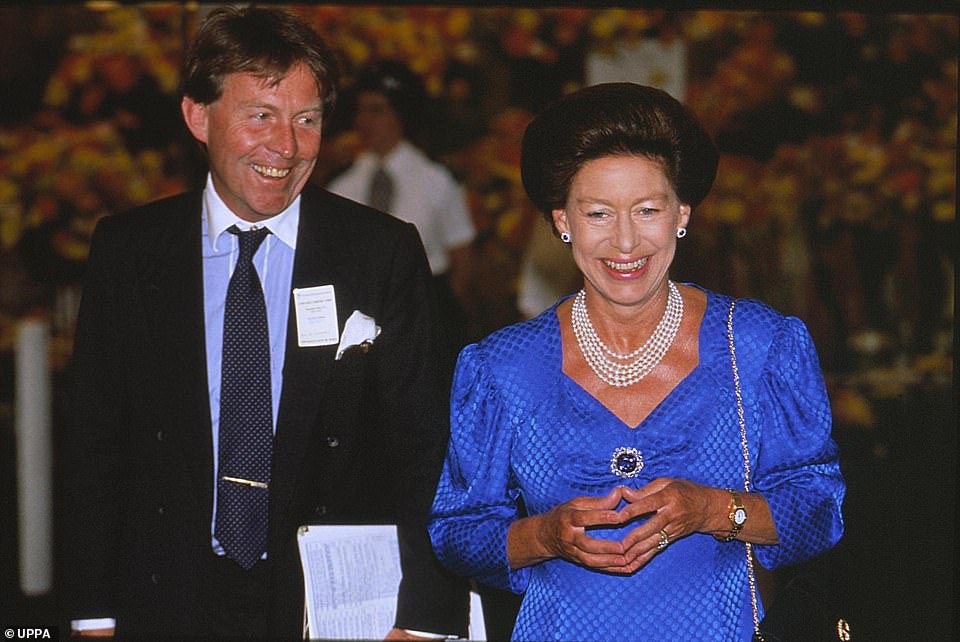 Alison Boshoff writes that Helena Bonham Carter shares many characteristics with the royal. A handspan waist, skin as pale as cream and eyes that radiate mischief being just a few. (Pictured: Princess Margaret with Roddy Llewellyn. He was her lover, despite being 17 years her junior, and landscape gardener) 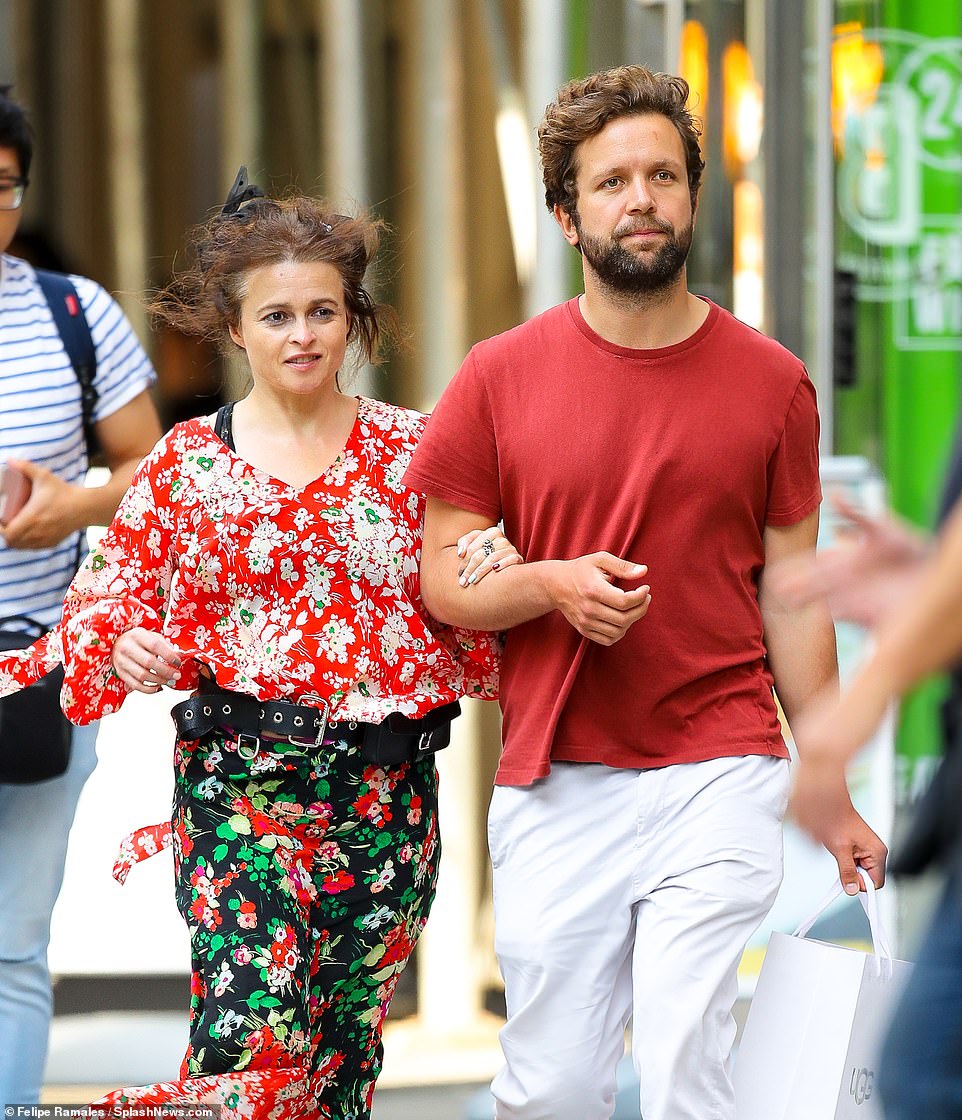 Helena Bonham Carter pictured with Danish boyfriend Rye Dag Holmboe in New York during May this year. Princess Margaret and Bonham Carter are also almost the same height, the latter being just half an inch taller than the former

Helena Bonham Carter comes from a prominent political family and her great grandfather was Herbert Asquith, the Liberal Prime Minister from 1908 to 1916.

Her uncle, Mark, was a publisher, Liberal politician and via his position as the governor of the Royal Ballet, a friend of Princess Margaret’s. Helena said: ‘My uncle was actually very close to her. She was pretty scary. At one point, she met me at Windsor Castle and she said: “You are getting better, [at acting] aren’t you?’ ”

Helena’s father, Raymond, was a merchant banker and represented the Bank of England at the IMF. Her mother is Spanish, the daughter of diplomats, and a psychotherapist. Helena is friends with David and Samantha Cameron, having got to know the former Prime Minister when he was working at Carlton TV.

She is also a distant cousin of Kate, the Duchess of Cambridge. She said in an interview: ‘I’m posh, but not that posh!’ She added: ‘I’m not sure which I’m more terrified about — doing justice to the real Princess Margaret or following in the shoes of Vanessa Kirby’s Princess Margaret.’

Helena and Tim Burton never married, but were together for 13 years, six films, and two children, Billy and Nell. Famously they lived in two adjoining houses in North London, with Helena explaining that this was the ideal solution because he snored and she talked in her sleep. Her house apparently looked like something out of Beatrix Potter, while his was decorated with ‘aliens lights’ and ‘skeletons.’ A corridor linked the two.

She said in an interview: ‘We did find each other. And really, the mark of a successful relationship shouldn’t be whether you’re there forever after. Sometimes you’re not meant to be forever together. Sometimes you have to come to terms with the fact — that was it. But that was a massive gift. We gave each other children and a lot more.’

Princess Margaret was married to photographer Lord (Tony) Snowdon from 1960 to 1978 and they had children David and Sarah. The marriage disintegrated in the mid-Sixties, and some blamed Snowdon’s commitment to work, which led to separations from his wife.

Biographer Anne de Courcy said: ‘Margaret’s template of marriage was quite different from Tony’s. He had parents who split, while her parents’ and sister’s marriage were very happy. He had a workshop in the basement of Kensington Palace, and while she was understanding of his work commitments, Margaret didn’t realise it would take him away from her so much.’

Snowdon started to have casual flings while away on assignment and in 1969 had an affair with Lady Jacqueline Rufus-Isaacs, which upset Margaret greatly.

Ben Daniels, who plays Snowdon in The Crown, said: ‘They’re such extraordinary people, completely addicted to each other. Right up until the minute they were getting divorced, they still had a strong physical relationship. People often said it was like foreplay for them, having a row. They’d have these huge rows and then amazing sex.’

Both women are at home with superstars — Johnny Depp is godfather to both of Helena’s children. Margaret famously moved in circles which included actors Peter Sellers and David Niven and Mick Jagger — and is said to have had romances with Sellers, Niven and even Warren Beatty.

FROM DIOR TO WESTWOOD AND A STYLE ALL THEIR OWN 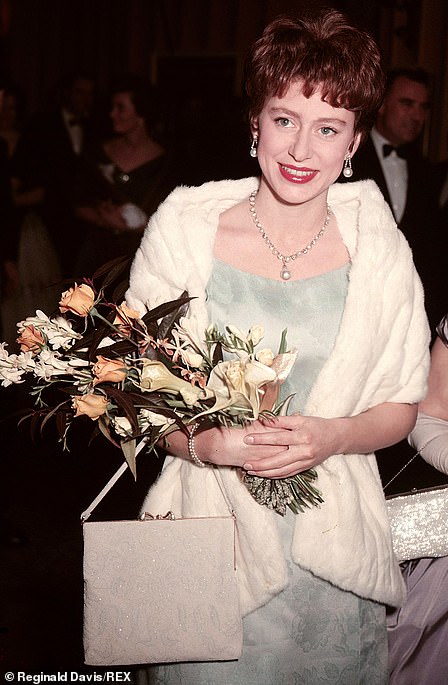 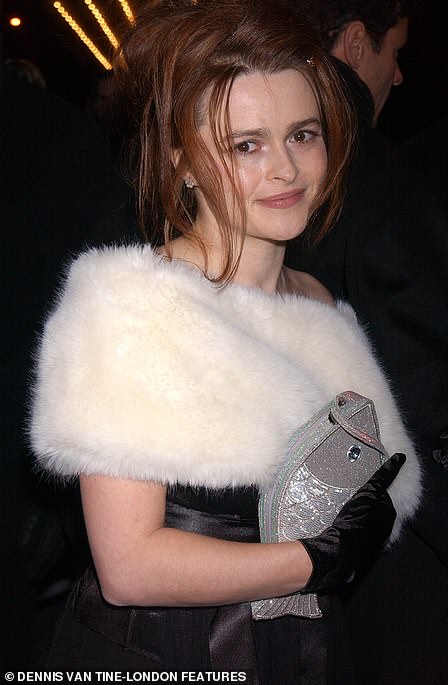 Margaret was an internationally celebrated beauty as a young woman (left, wearing a Christian Dior gown for her 21st birthday), and is even credited with helping inspire modern British designers such as Vivienne Westwood. Helena Bonham Carter is also famed as a beauty.

Margaret was an internationally celebrated beauty as a young woman, and wore a fantastic cream Christian Dior gown for her 21st birthday. She loved Dior’s New Look with nipped in waists and full skirts and was a Dior client almost until the end of her life.

Her 21st birthday dress is on loan to the V&A for their Dior exhibition. There was a previous exhibition at the V&A in 2007 where modern British designers such as Vivienne Westwood presented contemporary fashion inspired by Princess Margaret’s style.

Westwood is the designer most favoured by Helena for her red carpet looks. Off duty, however, she favours eclectic, often floral layers which, like Margaret’s kaftans and turbans, aren’t everyone’s cup of tea.

She’s even been seen wearing bloomers to the gym. Asked what designer she was planning to wear to the Oscars, Bonham Carter said that she hadn’t yet decided but promised, jokingly: ‘It’s going to be catastrophic.’ 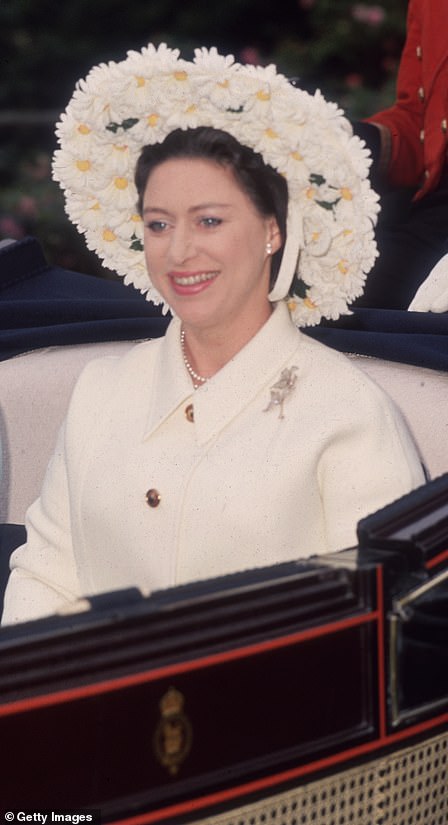 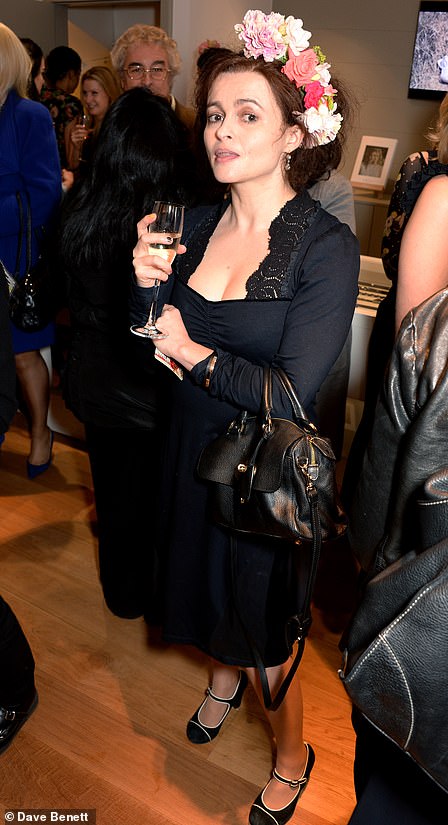 Princess Margaret is credited with helping to inspire British designers such as Vivienne Westwood who, in turn, became the designer most favoured by Helena for her red carpet looks

A ROYAL TASTE FOR CIGS AND SWIGS 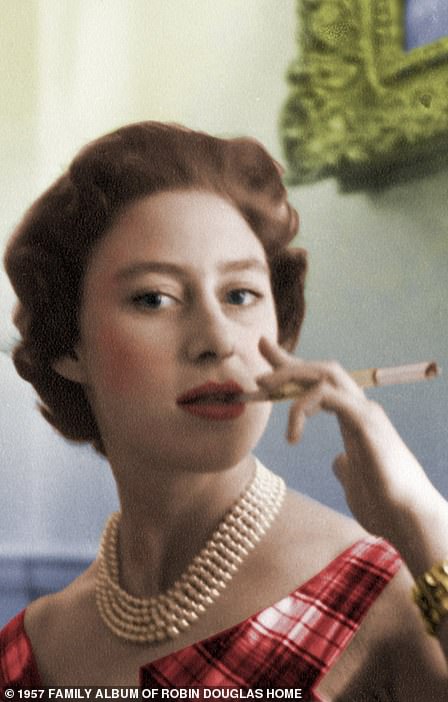 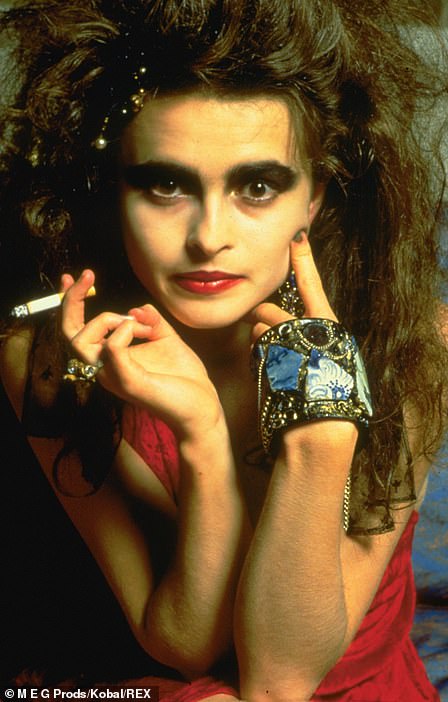 Princess Margaret loved to drink and smoke. When she visited Gordon Ramsey’s restaurant six years before she died he complained that the ash tray had to be changed every three minutes. Bonham Carter says she enjoys a drink but her real vice is caffeine

The Princess loved to drink and smoke. Six years before she died, Gordon Ramsay complained that on a visit to his award-winning restaurant: ‘She started with Scotch and went on drinking for three hours. The ashtray had to be changed every three minutes. I find it hard to believe she could have tasted the pudding.’

Bonham Carter says she enjoys a drink but her real vice is caffeine.

Helena Bonham Carter was a smoker in her 20s but is now thought to have kicked the habit. In the 1999 film Fight Club she played a character who smoked continuously. Helena said that director David Fincher ‘got obsessed with the smoke. It had to float in a particular way. So I was just always sitting there in a cemetery of cigarette butts’.

During filming she contracted bronchitis and her farewell gift to Fincher was an X-ray of her lungs.

Princess Margaret had a lung operation in 1985 and several years later, in 1993, she suffered a bout of pneumonia and several strokes. The royal died in February 2002. Bonham Carter was a smoker in her 20s but is now thought to have kicked the habit. She contracted bronchitis in 1999

Products In pof login – An A-Z