A baby girl has become the fifth living generation on both sides of the family.

Eloise Holland, from Blackpool, who was born in November, making her the fifth family generation on both her mother’s and father’s side.

The infant is some 97 years younger than her great-great grandmother Brenda Scarisbrick. 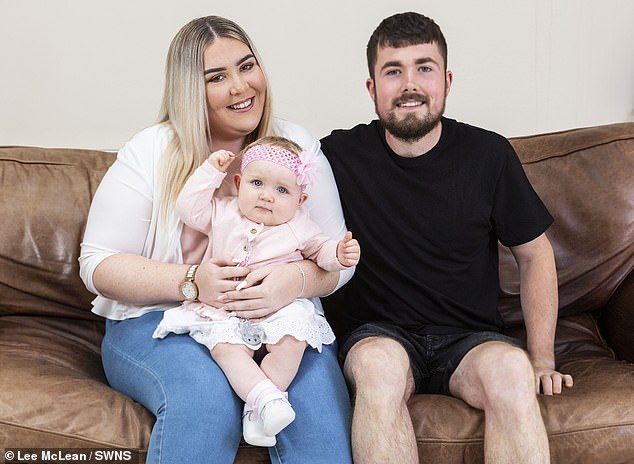 Sofia Holland, left, pictured with her daughter Eloise and her partner Liam Underwood, right. Baby Eloise, eight months, is the fifth generation of both sides of the family 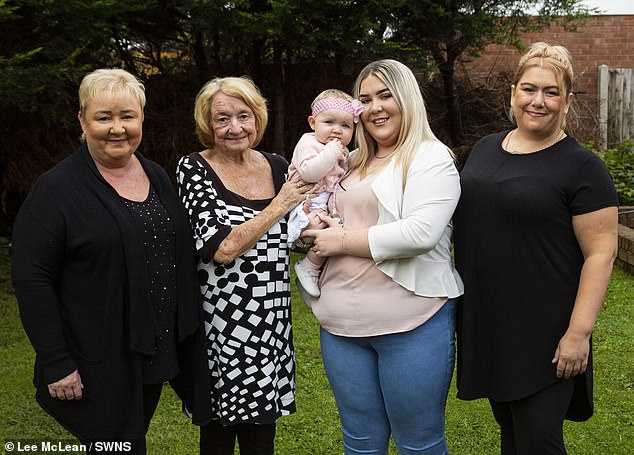 And Eloise is lucky enough to have her maternal great-great grandmother Margaret Wright, 74, to look up too as well.

As well as her parents, she has a grandmother, and great-grandmother on both sides of the family to dote on her too.

It means Mother’s Day is busy, Christmas is expensive, and there is always a birthday party to look forward to – but the tight-knit clan said they really are one big happy family.

Eloise Holland was born in November, making her the fifth family generation on both her mother’s and father’s side.

Proud mum Sofia Holland, 18, has just finished studying business at college, and father Liam Underwood, 21, is a maintenance manager on the North Pier in Blackpool.

Sofia, from Blackpool, said: ‘My daughter is perfect and I have the most amazing family around to support me as a young mum. I feel incredibly lucky.’

They are both grandmothers to baby Eloise, and are the third generation of the family.

However the family doesn’t stop there.

Karla’s mother Carol Bellone, 53, is an advertising sales manager and Linda’s mother, Kath Barnes, 70, is a retired saleswoman at Sandcastle Waterpark in Blackpool.

Both are great grandmothers to Eloise. 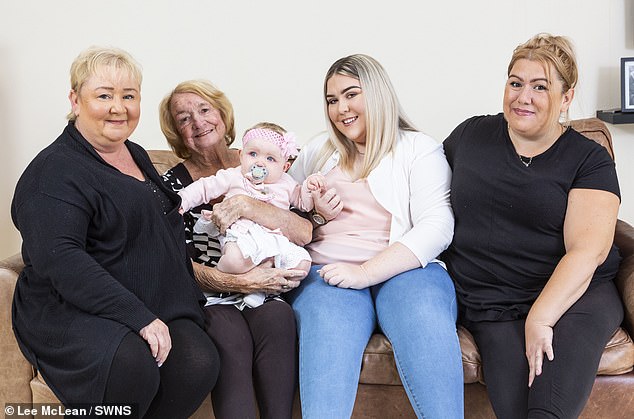 Just when you think that is incredible enough as it is, baby Eloise has another generation of relatives up the family tree.

When asked what the secret was to staying so young Margaret explained: ‘The main thing is keeping up with the kids.

‘They’re always up and about, and it’s knackering at times but I love them all dearly.

‘We have great fun together.’

Eloise’s great grandma Carol added: ‘I like to think I’m cool and down with the kids. My six grandchildren and one great grandchild keep me fairly busy as you might expect!

‘When the family gets together it is always filled with love and laughter, and on mothers day we always make a fuss of each other. It is a lovely time of the year for us.

‘When we do squabble most of the time it’s over Trivial Pursuit!’ 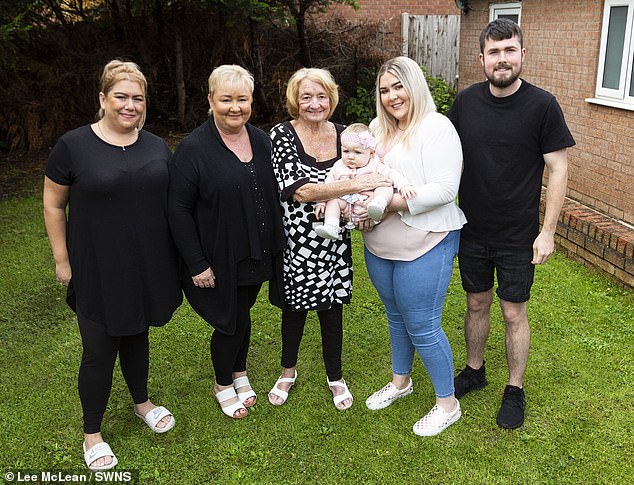 Eloise’s great grandma Carol added: ‘I like to think I’m cool and down with the kids. My six grandchildren and one great grandchild keep me fairly busy as you might expect!

Brenda, now a great great grandma, said: ‘Eloise was lovingly welcomed in November as the newest member of the rabble and is absolutely spoilt rotten.

‘There is lots of bickering to see who’s turn it is to hold her or feed her, and Sofia is never short of a baby sitter!

‘Funnily enough though there never seems to be a queue for a nappy change.’

When asked if she enjoyed having a massive family, Karla said: ‘I love it. Were all so close and have so much fun together.

‘Most of the time we don’t feel like family it just feels like hanging around with your mates which is such a lovely feeling.

‘We’ve all experienced being a young mum, and now Sofia has more support from the family than she can shake a stick at.

‘Christmas is expensive but we wouldn’t have it any other way. It’s always busy with stuff going on but that’s how we like it.

‘There is always somebody to talk to when you need advice, and I can’t imagine not being surrounded by all my amazing relatives.’

The whole family live in Blackpool, apart from Kath, who lives just 33 miles away in Southport.