Viewers of George Clarke’s Old House, New Home were left horrified after a couple revealed they had spent £33,000 transforming their dingy back room into a lilac kitchen-diner with salmon pink units.

In last night’s episode of the Channel 4 show, George travelled to Ormskirk, near Liverpool, to meet Simon and Emma, who wanted to renovate the small kitchen and back room on the ground floor of their Victorian home.

The architect said he doubted whether they could complete their extensive transformation with their £25,000, with the couple later admitting they went over budget by almost £10,000.

But viewers were left stunned after George commented on the spend as ‘not bad’ and complimented their use of colours within the space, with many wildly disagreeing with the presenter.

‘Why buy a Victorian house then gut it of period features and go ultra modern?’ Another asked, ‘Why not buy a modern house first?’, with a fellow commenter agreeing that he should ‘really know better’.

Another questioned George over his support of the couple, saying: ‘Is George Clarke a trained designer or architect…or just a b********?’ 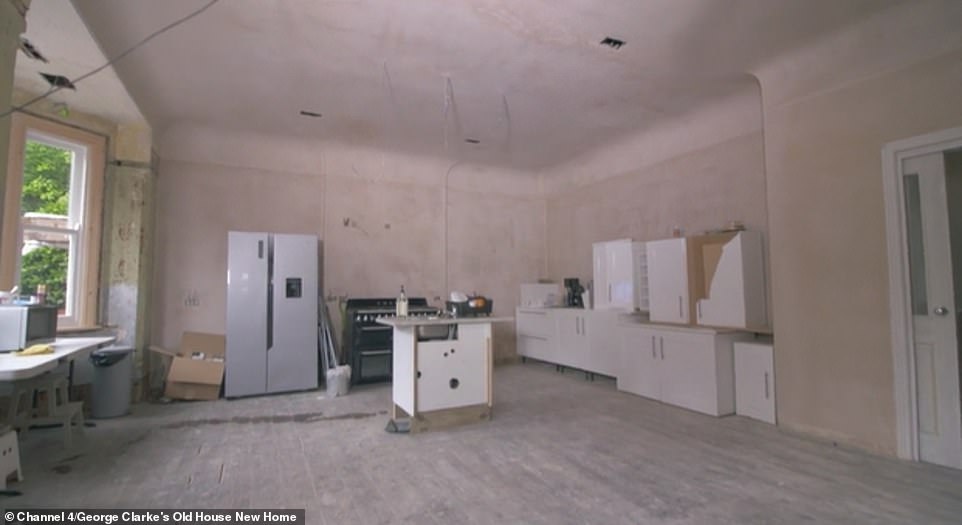 Before: George Clarke visited Simon and Emma, from Liverpool, on last night’s episode as they transformed their dingy and backroom into a huge kitchen diner (pictured, their makeshift kitchen before) 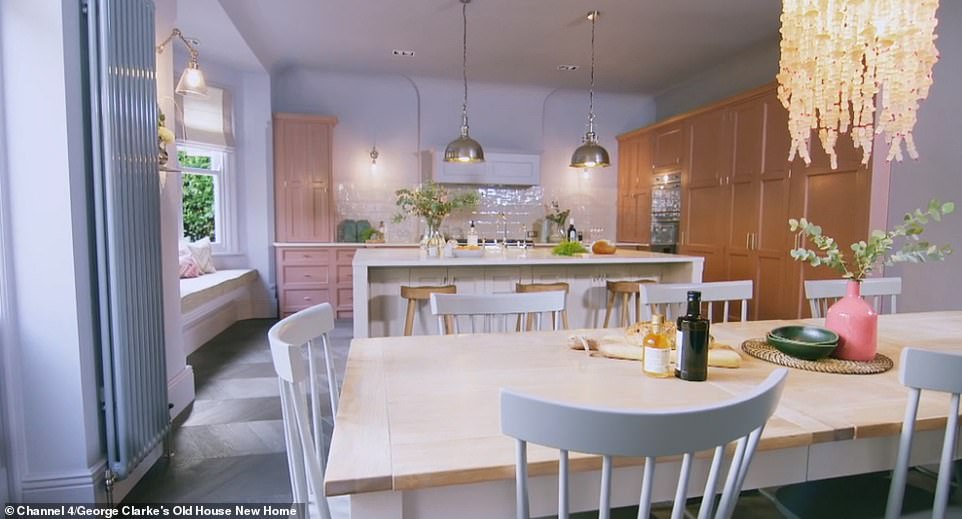 After: Viewers were left unimpressed by their bold renovation, which saw them paint the walls lilac and add salmon pink units to the enormous space  (pictured, their kitchen-diner after)

Another commented: ‘Oh my word. Excuse me while I vomit at that kitchen. Salmon pink, lilac walls, dark wood, light wood, dark wood all in one kitchen.’

The duo explained how George first helped redesign their master bedroom in the Victorian villa back in the summer of 2018.

He turned what was a spare room, children’s bedroom and a bathroom into one huge master bedroom, complete with an en-suite bathroom and a walk-in wardrobe.

And one year on, Simon and Emma said they were now desperate to tackle what should be the heart of any family home – the kitchen.

Emma explained: ‘The kitchen from the previous owners is quite small. ‘We’ve got quite a big back room, which just screams of being a big kitchen diner.’

Simon added: ‘When George came last time he opened our eyes to being a bit bolder,’ while Emma admitted: ‘It’s having that expertise, it elevates everything.’ 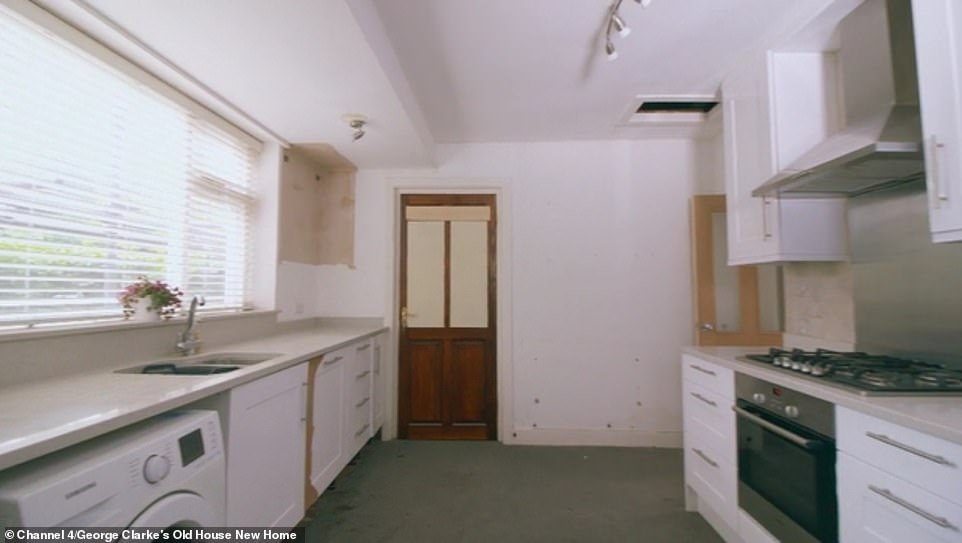 Before: The duo told George that their kitchen was almost unusable because of it’s small size and dingy decorations. Pictured, before the transformation 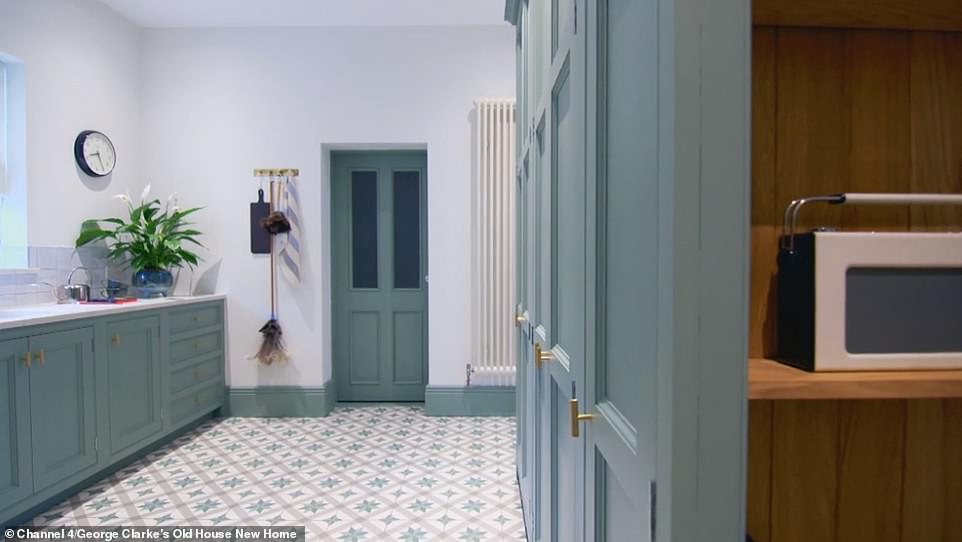 After: The couple lifted the ceiling in their old kitchen to create a large utility room, adding egg blue units and a bold tiled flooring to the space (pictured, the space after)

And after greeting George like an old friend, they showed him around, explaining they’d actually been using a makeshift kitchen in the larger room because the current kitchen is too small for their needs.

But the make-shift kitchen was squashed into the back of the couple’s room, with Simon revealing they were currently splitting their time between the two rooms.

‘We cook in there, we do the washing up in here and the washing machine is in there, and the dryer is over there,’ Simon explained.

George asked how long they’ve been living like this, with Simon admitting it has been a few months.

‘This is the straw that might break the camel’s back if we don’t fix it soon,’ confessed Emma.

Viewers were stunned by the project, with several saying they couldn’t believe how much the couple had spent on the renovation project

The couple revealed they had a budget of £25,000 for their kitchen renovation, which George said was more than the average for the project. However, he still questioned whether they could do it with that amount.

‘We’re not going to do it if it’s not going to fit the house, but we can stretch it if we get what we want,’ explained Simon.

George added: ‘I love that bit of pressure you’ve just put back onto me there. I might be able to find more money if your scheme is really worthwhile building.’

The expert suggested the couple build a huge grand kitchen along the back wall, placing their cooker and range on the chimney breast. 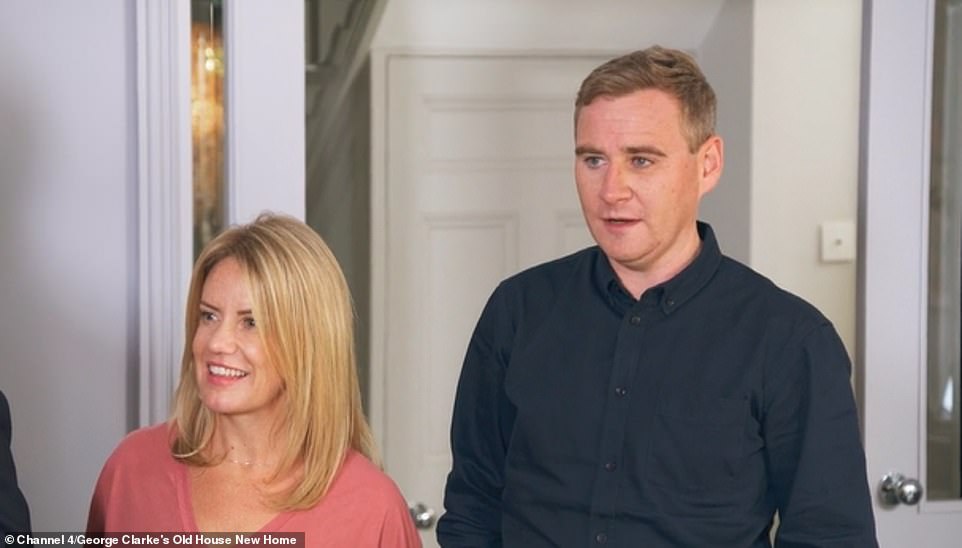 ‘If you are going to use an island unit, it wants to be a decent size in the middle of the space there, aligned with the range,’ he explained.

He went on: ‘If the budget can stretch, the bay window is calling out for some seating, while in the dining area, I’d knock out the back wall and add double doors into the back garden.’

He also explained that the current kitchen could become a spacious utility room.

‘If we can pull this off, you’re going to have a dream kitchen, dining and utility space,’ said George. ‘It’s going to be tricky with your budget, but we’ll give it our best shot.’ 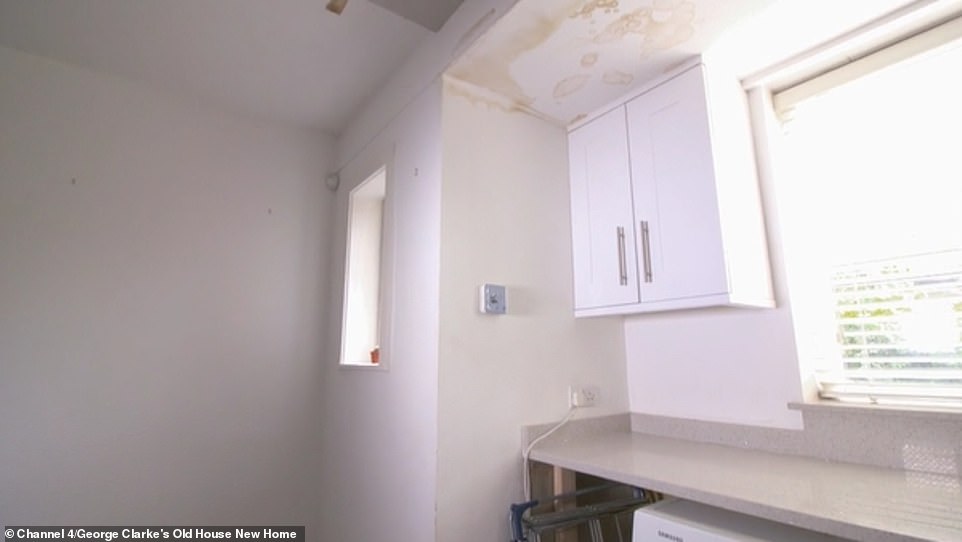 The couple explained to George their ‘before’ kitchen felt dark, dingy and impractical for a growing family-of-five (pictured, the kitchen before the renovation) 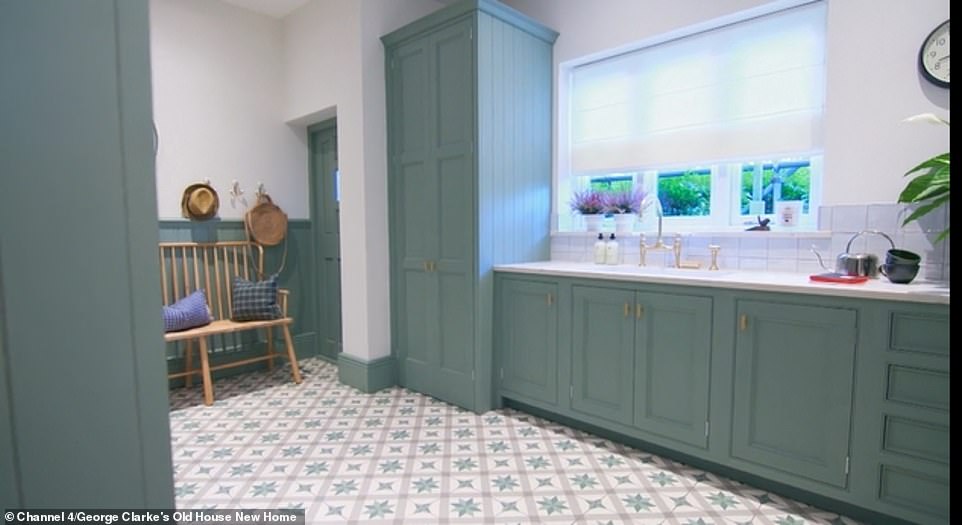 They went on to lift the ceiling in the former kitchen to create the illusion of space, and added duck egg blue units to make a smart utility room (pictured, after the renovation)

Simon’s father and and brother, both of whom are builders, ended up doing most of the work, which helped the couple’s £25,000 budget stretch a bit further.

To make way for the new utility room, they ripped the original kitchen out and removed the 70s ceiling along with plaster from the walls.

They decided on traditional units, but in a bold move, opted to paint the kitchen units a salmon pink, while they also chose a bright lilac colour for the walls.

To keep costs down, they bought unpainted kitchen units, which could be painted onsite, and added parquet flooring to contribute to the grandeur. 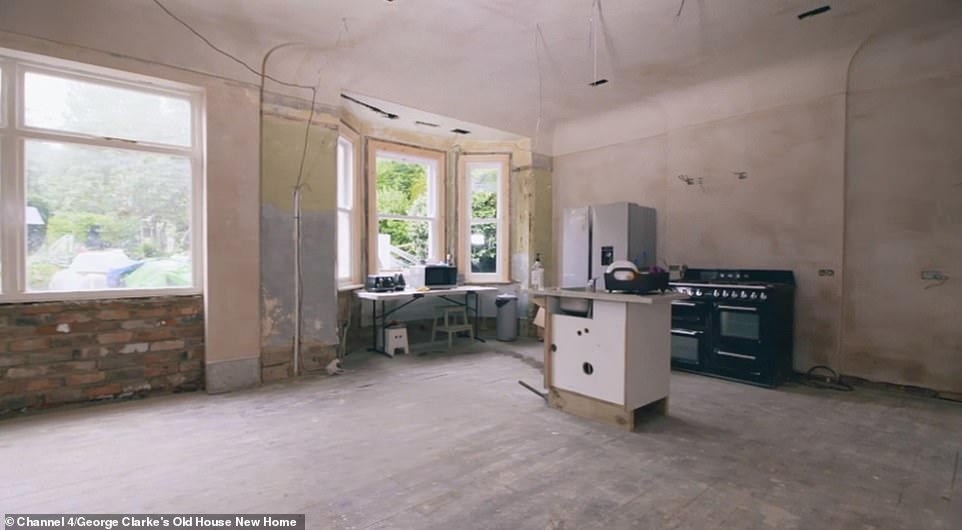 The couple wanted to make the most of the enormous room at the back of their home, and opted to transform it into a huge kitchen-diner space 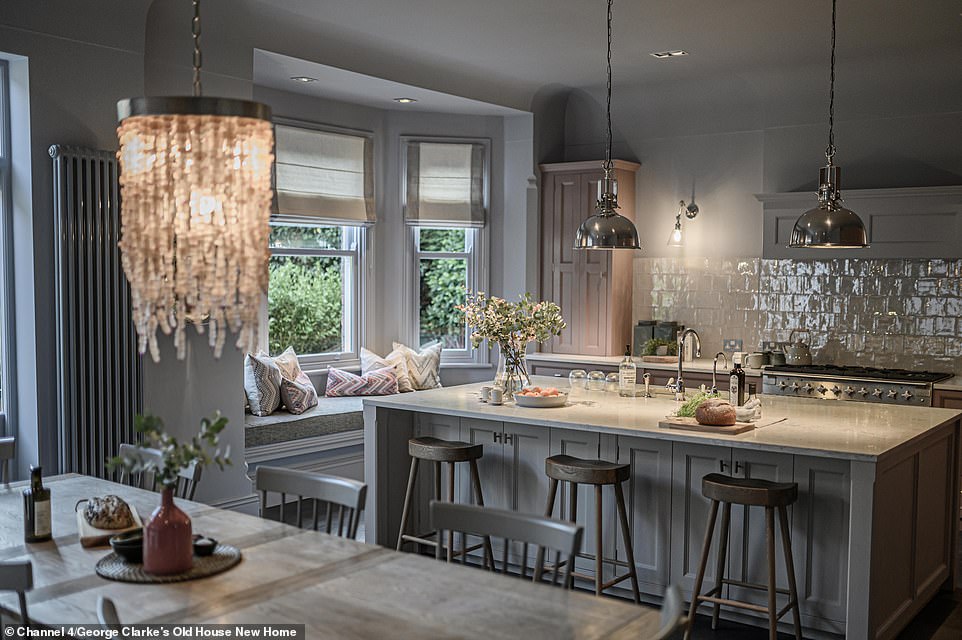 And after the transformation, the couple said they were delighted with their trendy updated kitchen diner, even adding a seat in their bay window (pictured)

Revealing their ambitious kitchen refurbishment to George, the architect could barely believe his eyes.

‘Oh my word,’ he exclaimed. ‘It’s not going to waste anymore!

‘The scale of everything in here is absolutely massive,’ explained George. ‘But the space can take it. It really can. It’s not a kitchen island, it’s a continent.’

Meanwhile Simon added: ‘It’s so homely. It’s great when you open the front door, you can see right through the house. It just draws you in.’ 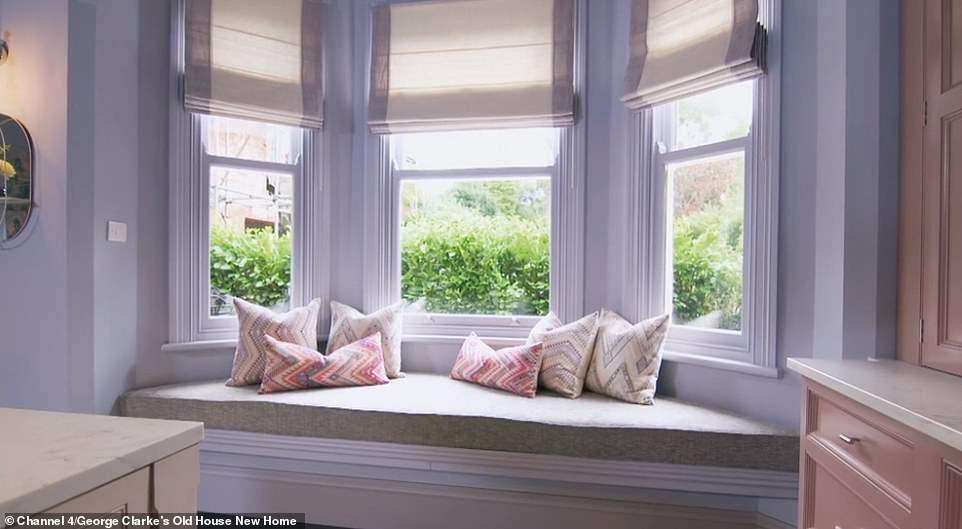 The couple chose to add a window seat to the kitchen area, painting the walls in a bold lilac colour to compliment the salmon pink kitchen units 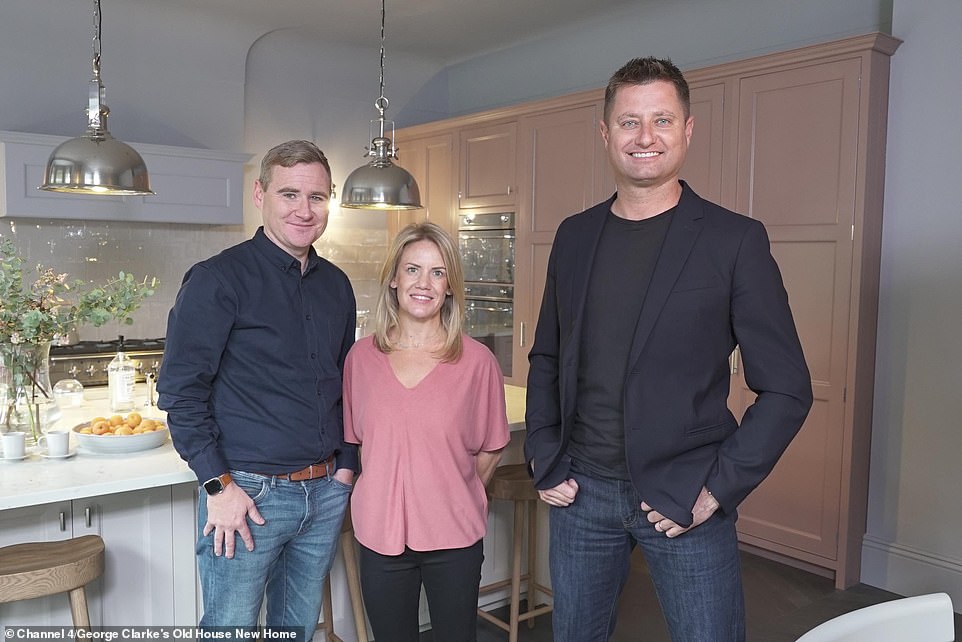 Emma and Simon said they were delighted with their ‘dream’ kitchen, calling it ‘perfection’, before admitting they went over budget by almost £10,000

George said: ‘I love all the choice of colours. I love the dark floor, which makes all the colours pop out even more.’

And asking if they ‘ever imagined’ they could have such a space, the couple admitted: ‘We never expected it. It’s unbelievable. It’s everything we wanted and more.’

Emma pointed to the wood burner, hand-painted units and huge dining table, as examples of their ‘perfect’ kitchen.

Meanwhile, in the utility room, the couple revealed their soft duck egg blue units and a patterned tile floor.

And George was blown away by what they have achieved, saying: ‘It just gets better and better, that’s amazing that.’ 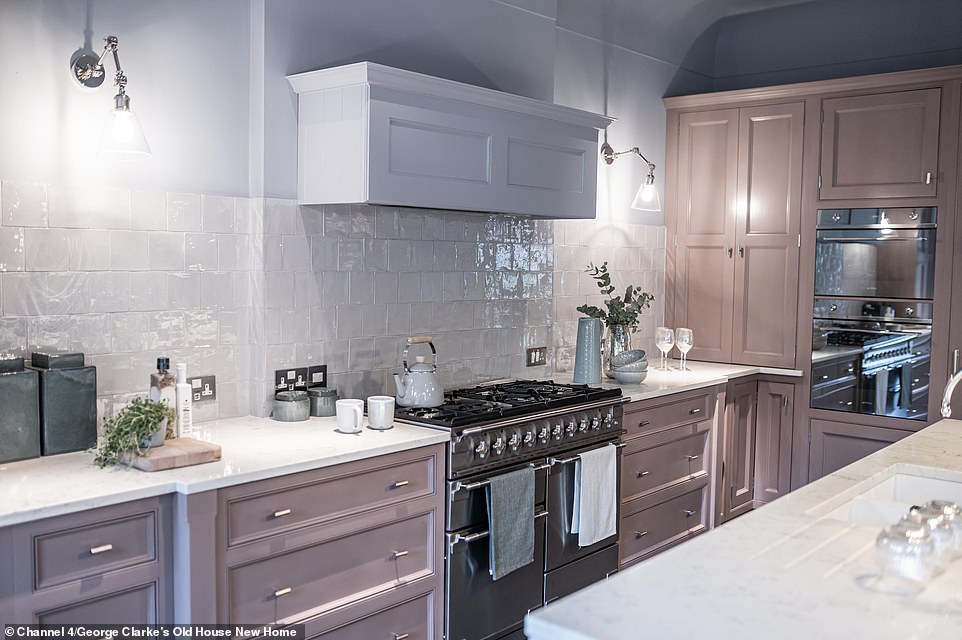 After: The couple opted for a trendy makeover for the enormous space, with salmon pink units and white tiling in the enormous kitchen

They also revealed how they had lifted the ceiling in the utility room, with Simon explaining: ‘It just feels so much bigger.’

But when George asked the couple about their budget, their faces fell. They called £25,000 ‘wishful thinking’, and admitted they had spent significantly more.

However, they defended their decision, saying: ‘It’s our house for the next 25 years so we thought if we are going to do it, let’s do it right.

But George seemed impressed by their spend, saying: ‘It’s not that bad.’ 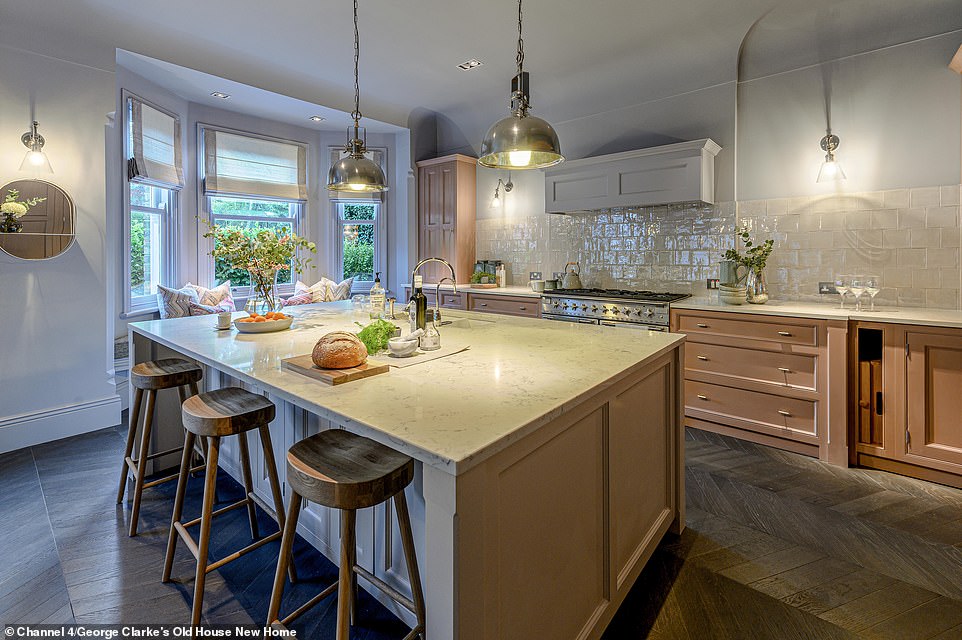 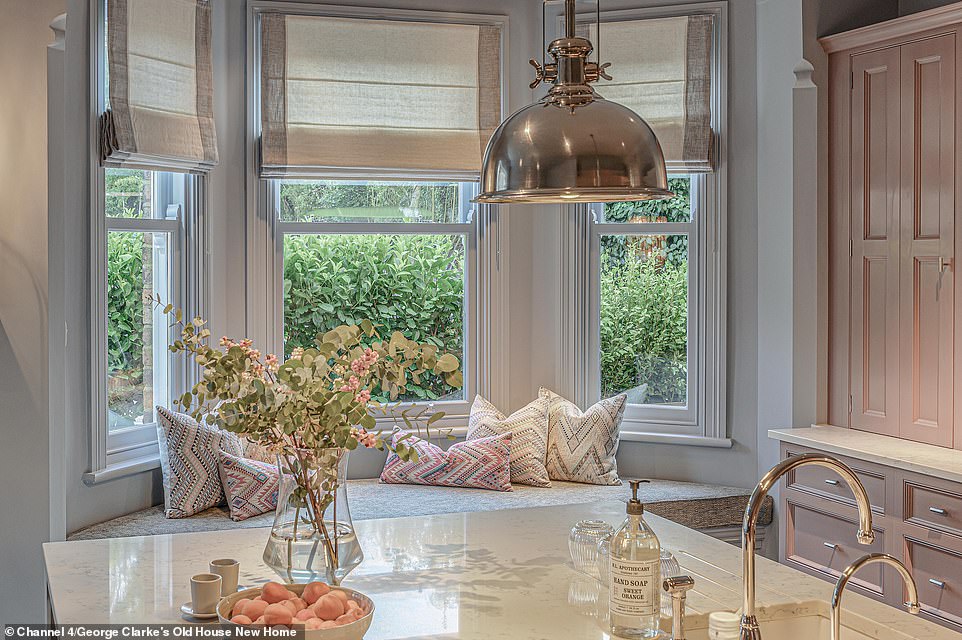 The parents-of-three were keen to add a window seat to their enormous kitchen, and opted to keep the space bright by having white surfaces and salmon pink units

But while the couple appeared delighted with their new kitchen, viewers were horrified by the renovation and shocked by how much the couple had spent.

One commented: ‘Imagine being told £25k for a kitchen was gonna be tricky?’

Another added: ‘Salmon pink kitchen and black taps might age like the peach and avocado bathed suites of the ’80s.’

One wrote: ‘That kitchen is horrible. The colour is vile. The only thing I’d tolerate are the chairs. At a push. There’s nothing original about it. Zero imagination. Opportunity missed.’ 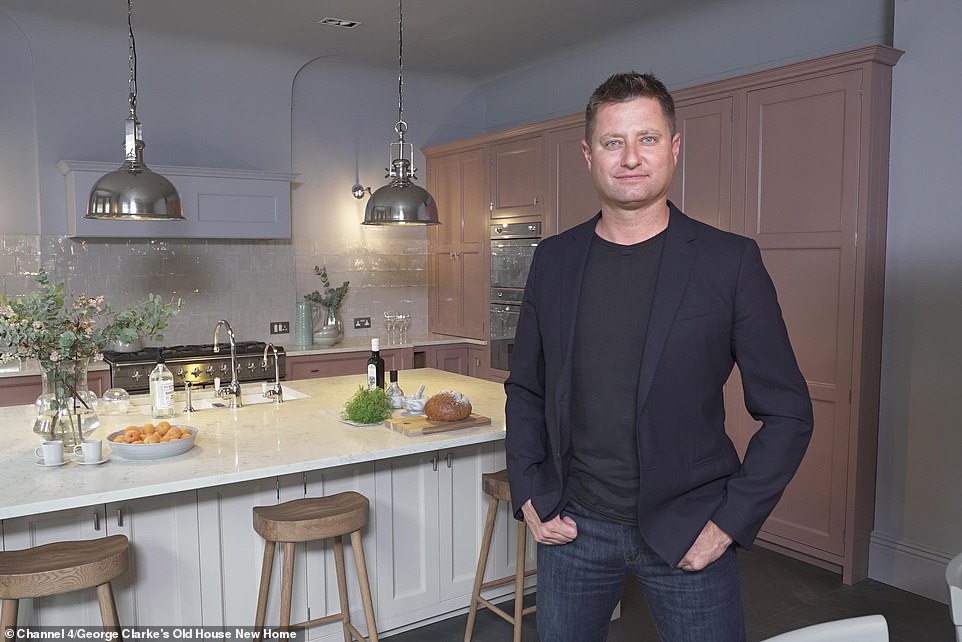