Tiny Betsy Hibberd might not be quite big enough to see over a stable door – but she’s a dab hand at riding her pony.

The fearless equestrian, who is only two-years-old and lives with her family in Calne, Wiltshire, has already won handfuls of rosettes for her riding, and begs her mother to let her go galloping through the fields with her older friends.

But being aged just two, and the youngest ever member of her local Pony Club branch, mother Georgie is sometimes reluctantly forced to rein in her enthusiasm.

She, along with big brother Arley, six – already competing in Hunter Trials – have been riding since before they could walk, and love nothing more than hacking their ponies along country roads near their home with Mum in tow.

Although the thought of watching their toddler bravely stand up on the back of a pony might make some parents just a tad nervous, Georgie, a teacher and artist, says she’s delighted her children take risks – and bought Arley his first pony as soon as he could walk.

And while both children take the odd tumble, Georgie says she’s much rather her children learn how to take risks and be out in the fresh air than in the house watching a screen. 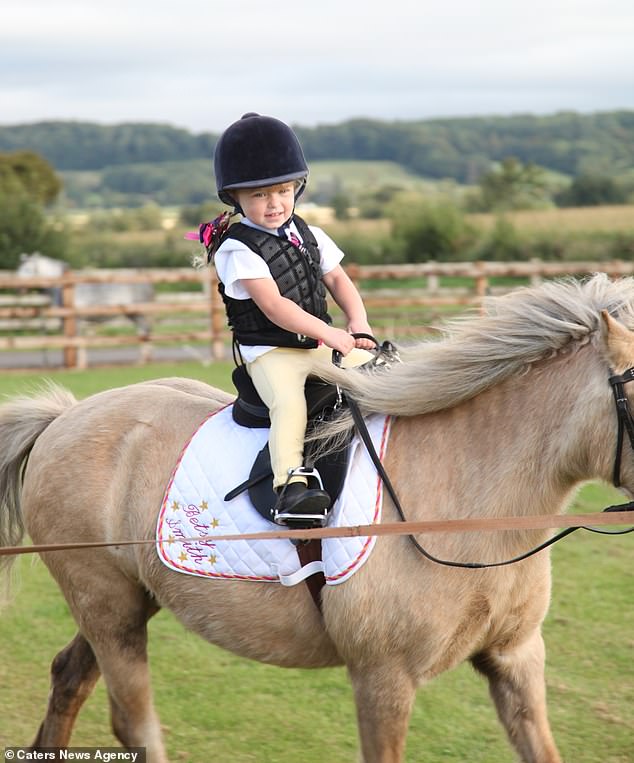 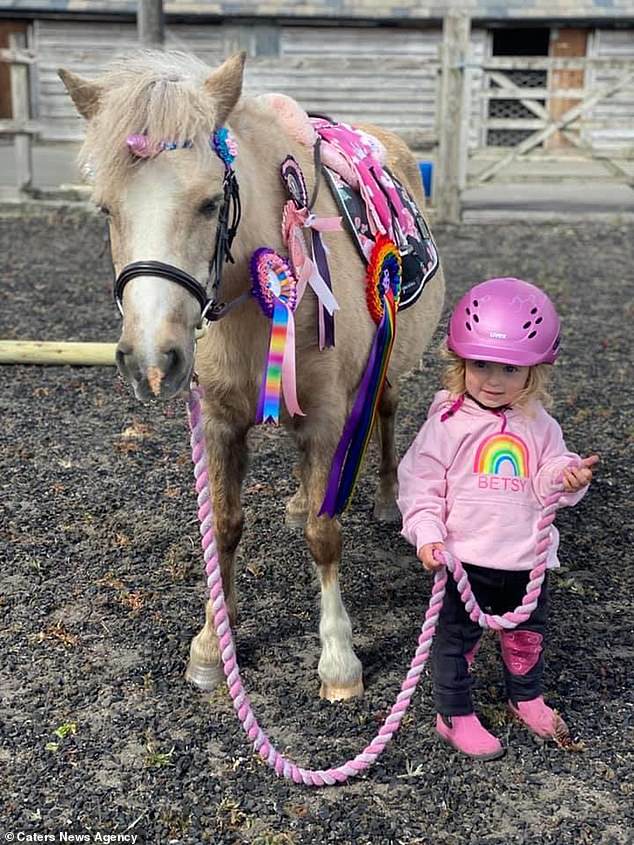 Georgie, mother to Betsy and her older brother Arley, six – who is already competing in the Hunter Trials – said she kept a close eye on her youngest, pictured with a pony decorated in rosettes

She said: ‘We bought our first pony when Arley was just 12-months-old. I had always ridden and really wanted to give my children the opportunity too as well.

‘He has always liked the horses, but when Betsy came along, she was desperate to get on board.

‘She’s been riding since she was born.

‘I will turn around and find her standing up on her pony’s back, she’ll want to ride backwards, and always want to go faster or do what Arley is doing.. She has no fear! 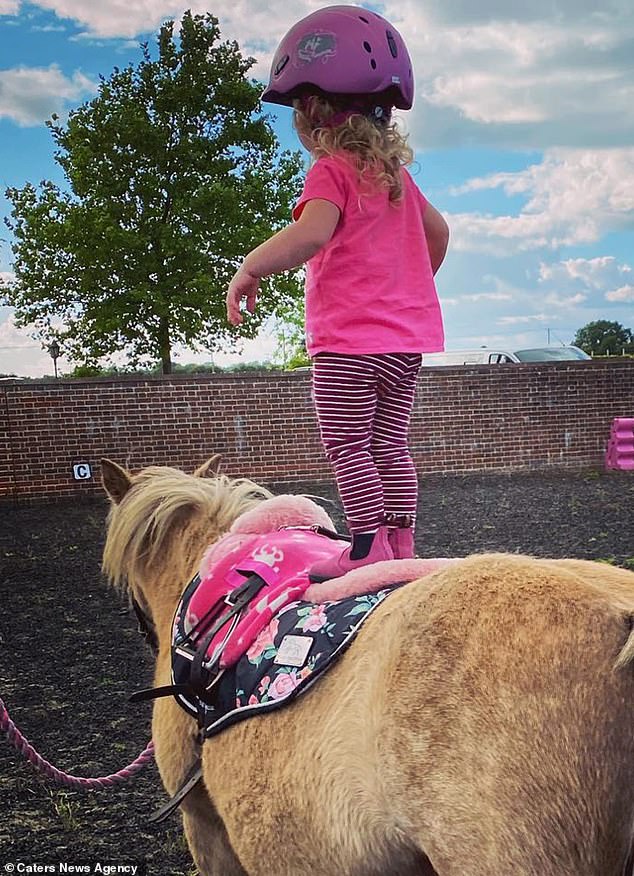 Daredevil Betsy loves to ride without her hands on the reins and to stand on her pony’s back. She often begs Georgie to let her go galloping in the fields 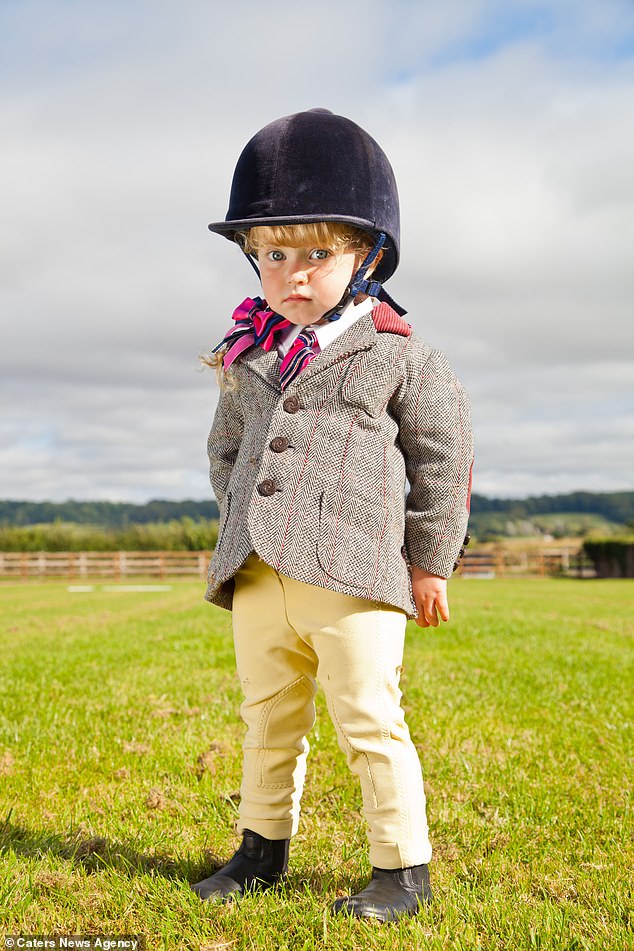 Adorable Betsy in a rider outfit with a protective helmet and tweed jacket, with a pink competition rosette on her right shoulder 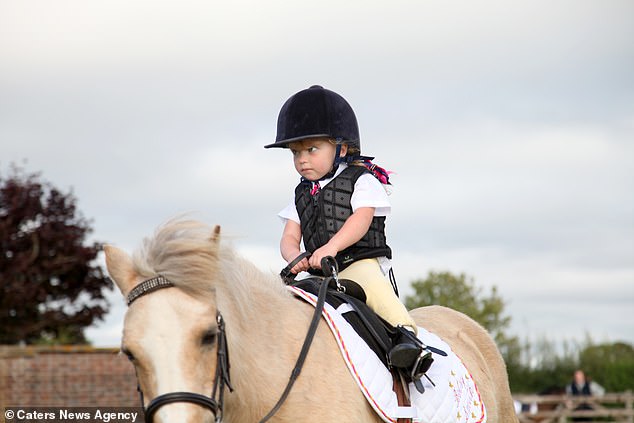 Georgie explained that keen rider Betsy has been riding since she was born, before she could even walk 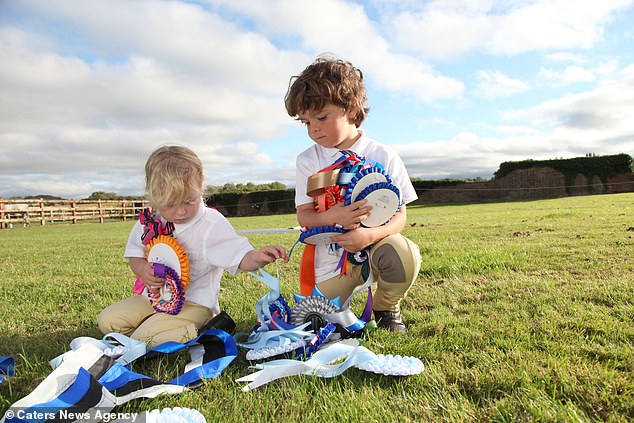 ‘Arley has started competing in hunter trials, and he’s starting to jump, and Betsy is desperate to be big enough and go with him.

‘She would have no qualms about going off by herself, but I try to balance her adventurous side with keeping her safe.

‘I put up a video on social media of her riding along with no hands on the reins singing wind the bobbin up – she was so relaxed and happy, it went mad with likes and comments.’ 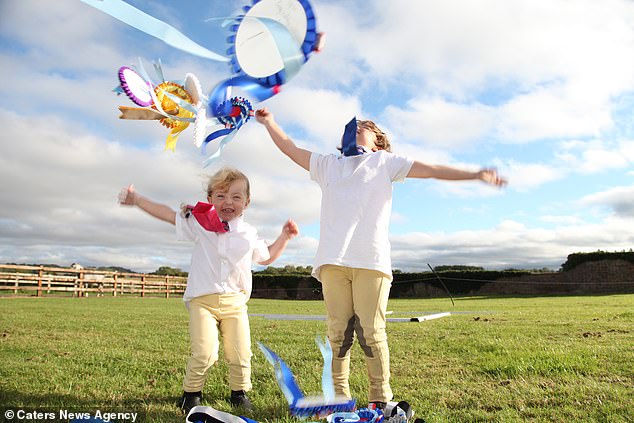 The brother and sister jumping enthusiastically, throwing their riding competition rosettes in the air 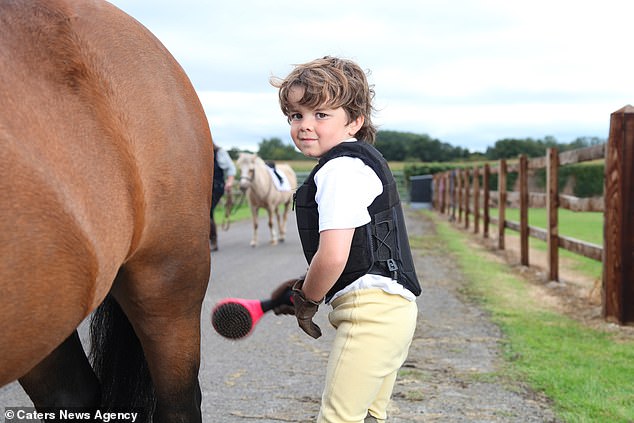 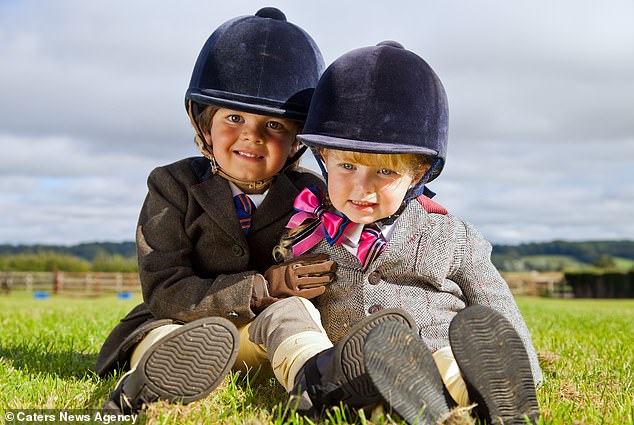 Arley and Betsy in their riding outfits and protective helmets. Georgie said Betsy always wanted to go as fast or faster than her brother 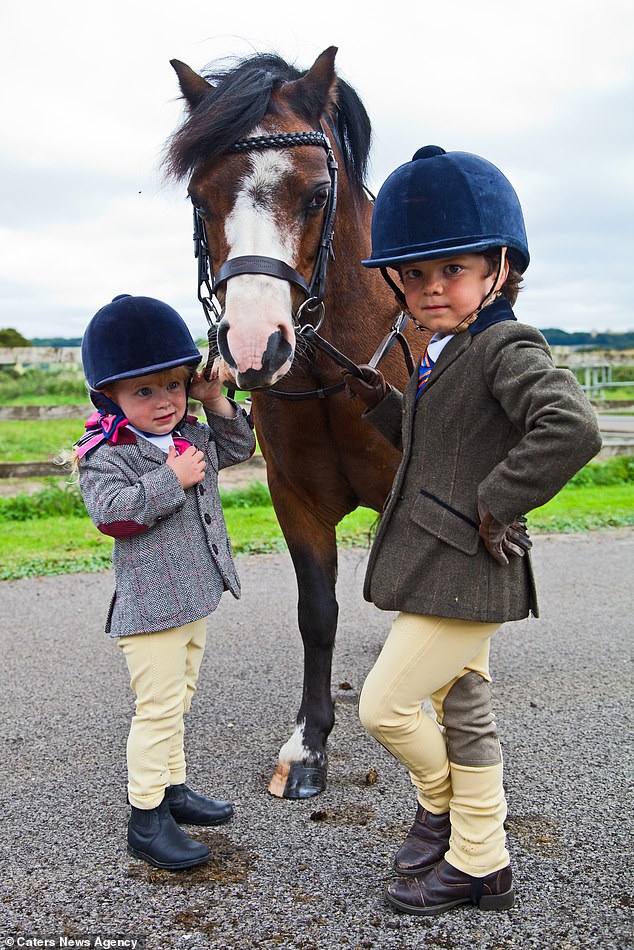 The brother and sister next to one of their ponies. Both children are members of their local pony club 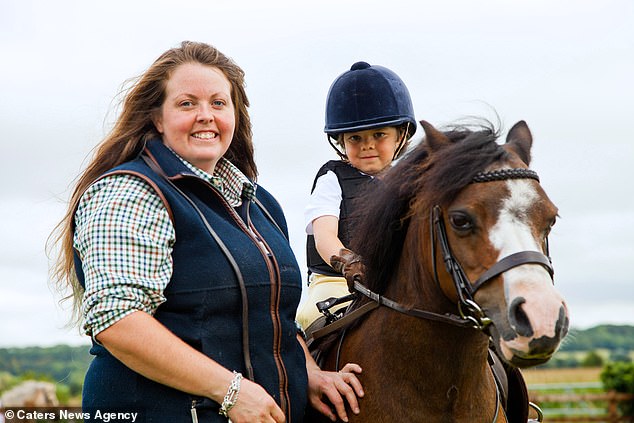 Georgie with eldest, Arley, while he is on horseback. The doting mother-of-two keeps a close eye on her sporty children 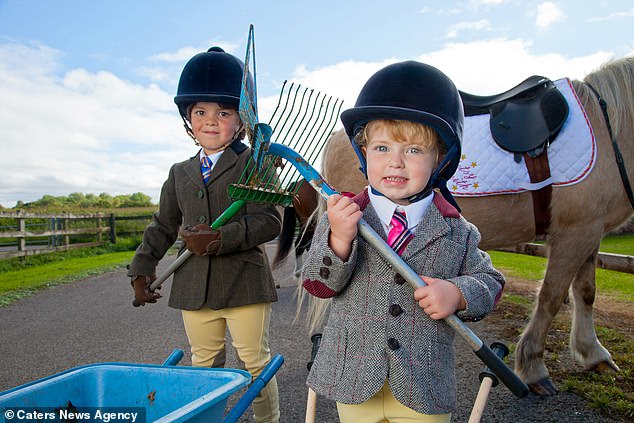 While most girls her age play with toys, Betsy is at her happiest cleaning after her ponies with her brother

Both children are members of their local Pony Club, where they regularly compete against other children on their ponies, Barney, and 11.1hh bay, and Honey, a similar-sized Palamino.

Georgie added: ‘The ponies seem a little big for the children now but there is plenty of room for them to grow into them.

‘They are already lifelong friends so it’s nice they will be able to grow up with them. 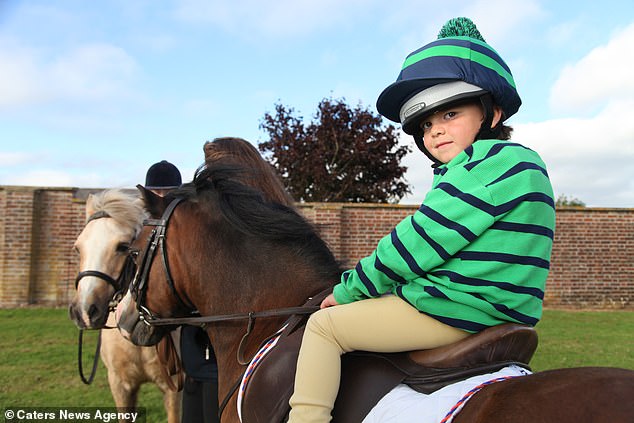 Arley is already competing in the Hunter Trials, a cross country riding events, and has won several rosettes of his own 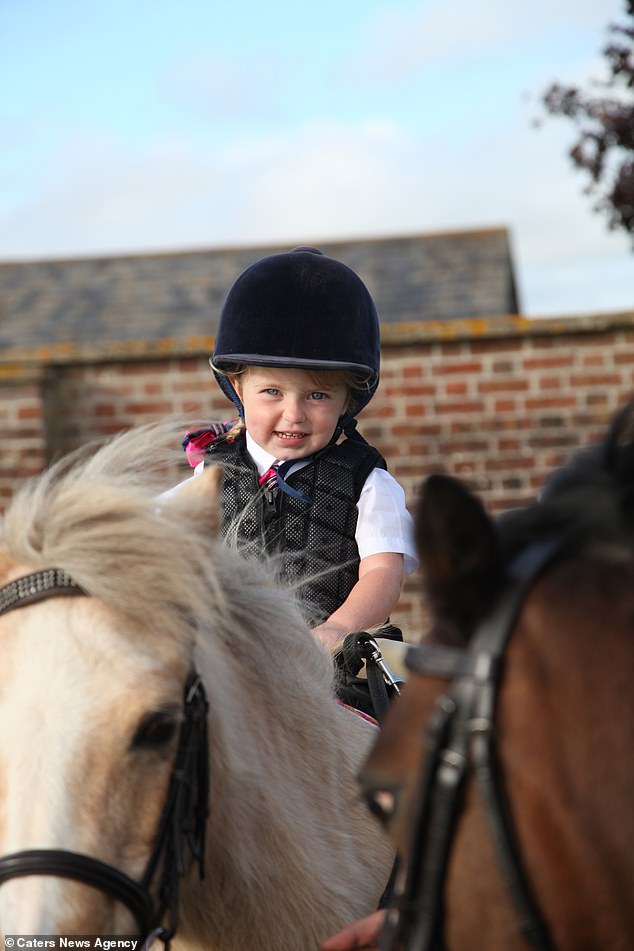 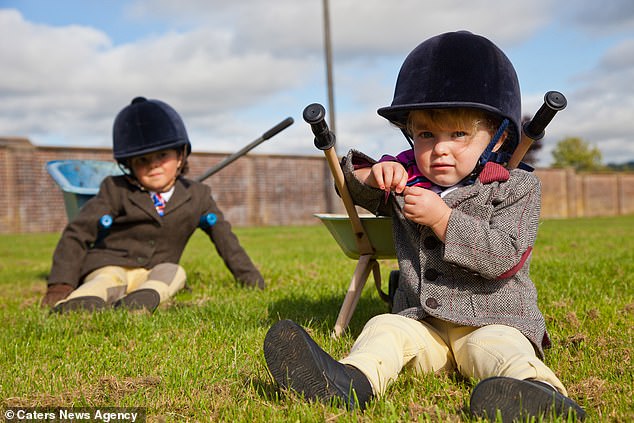 The brother and sister duo getting ready to muck out their phones. Georgie revealed her children could spend hours grooming and cuddling their ponies 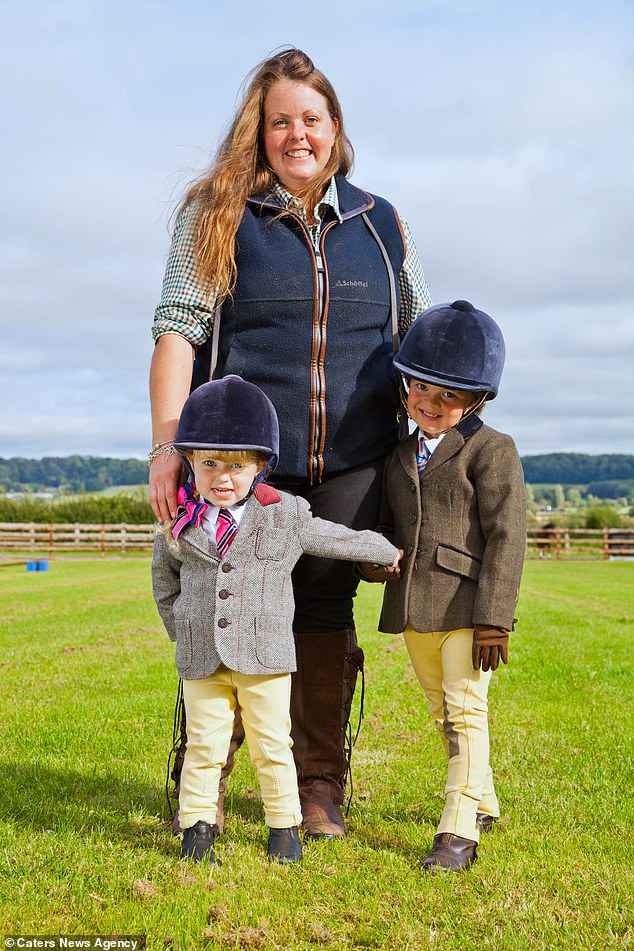 Georgie with Betsy and Arley. The mother-of-two joked it was a struggle to keep her youngest, Betsy, from cuddling any horse she sees

‘Riding is good exercise for the children, and it teaches them about responsibility and caring for another creature.

‘They are young but they still have to do chores – they have miniature wheelbarrows and have to come and poo pick the fields with me.

‘They both really enjoy it though, and they will spend hours grooming and cuddling their ponies.

‘Cleaning out the horses’ hooves is their favourite job. 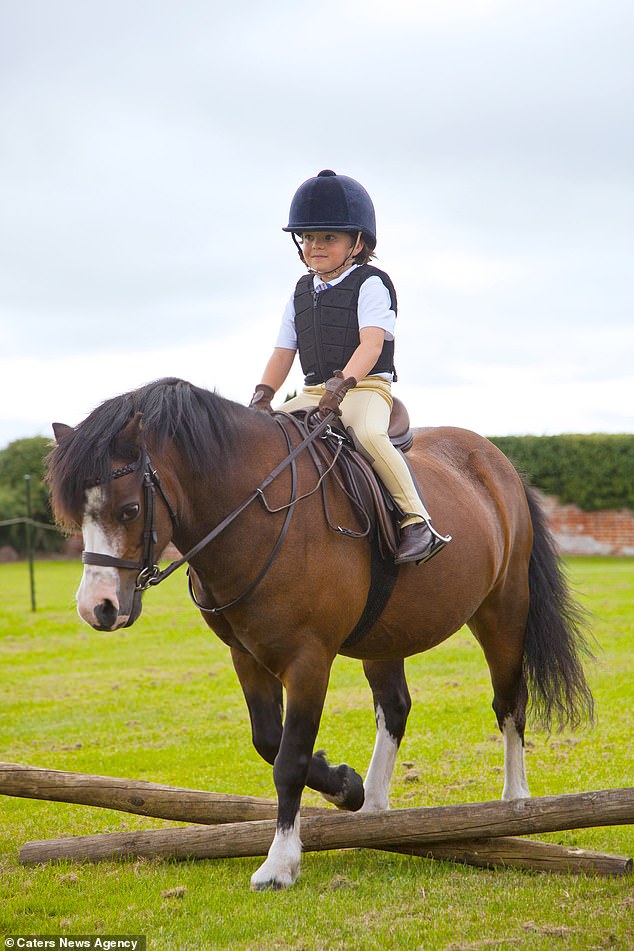 Arley riding his pony. Georgie said she felt lucky she had adventurous and responsible children 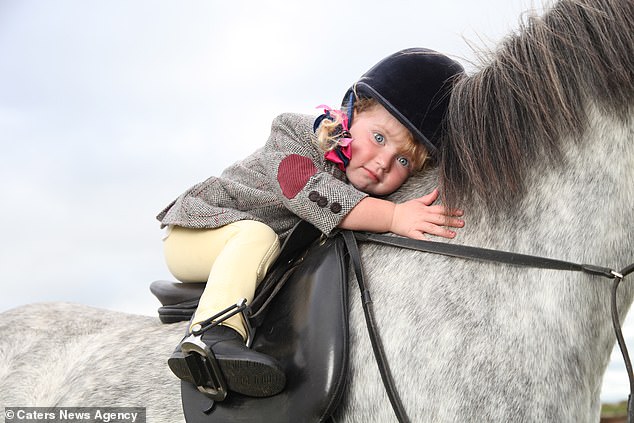 Betsy giving a pony a cuddle. Sophie Dalrymple, Joint District Commissioner of the Tedworth Hunt Pony club, said: ‘We’re thrilled to have Betsy as part of our team, we always like to encourage children from an early age 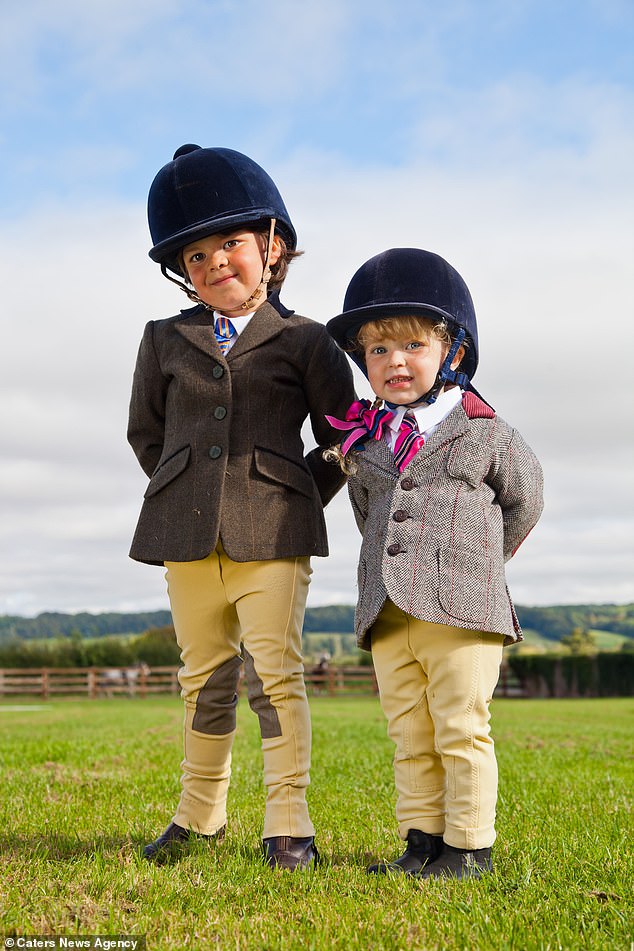 Arley and Betsy, Georgie said she would not have pushed riding onto her children if they had not been interested 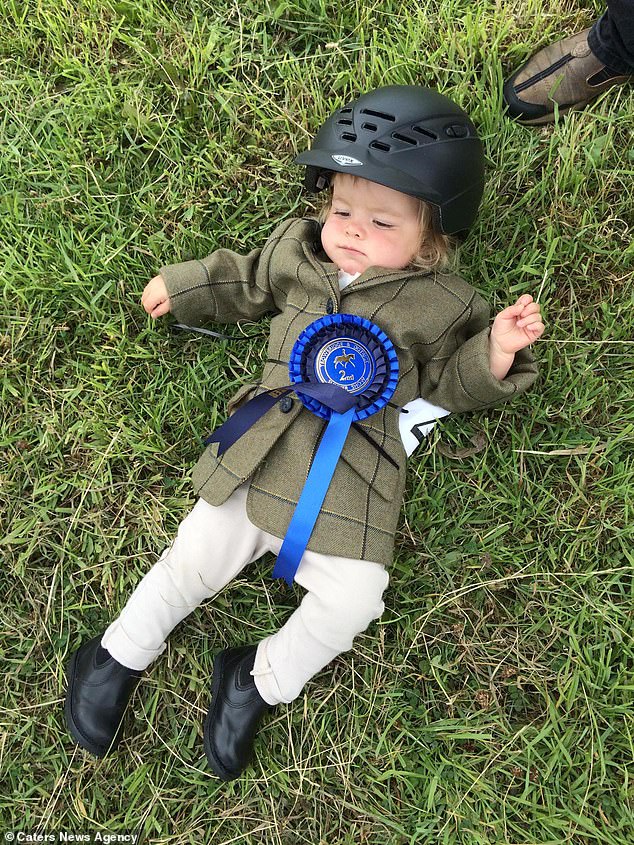 Betsy not looking too impressed with her second place rosette. The competitive toddlers always wants to go ride with older kids

‘Arley even took Barney onto a Zoom lesson with his class earlier this year, the children loved seeing him.

‘Betsy will just want to run up and cuddle any horse she sees – it’s actually quite hard stopping her!

‘But they are both learning so much, and are really quite knowledgeable about horses and how to care for them now, that I wouldn’t have it any other way.

‘Of course, if they weren’t interested, I wouldn’t push them into it, but I feel very lucky to have such brave, adventurous yet responsible children.’ 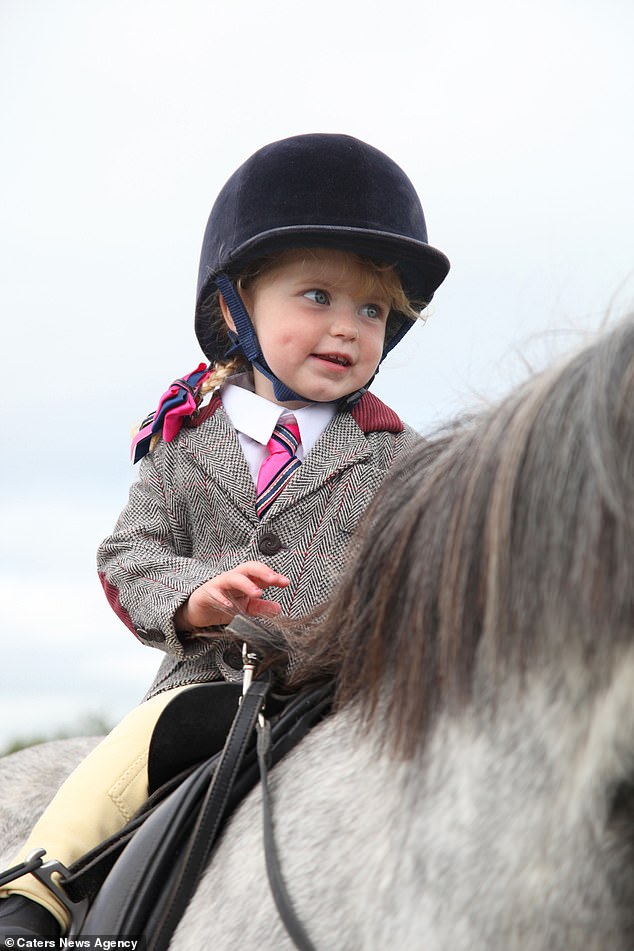 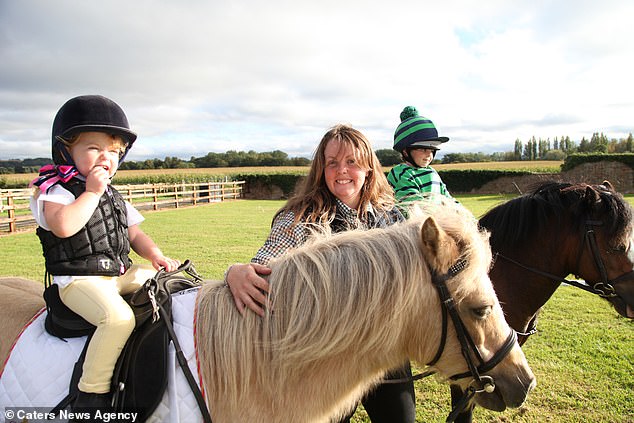 While the ponies are big, Georgie is confident there’s plenty of time for Arley and Betsy to ‘grow into them’ 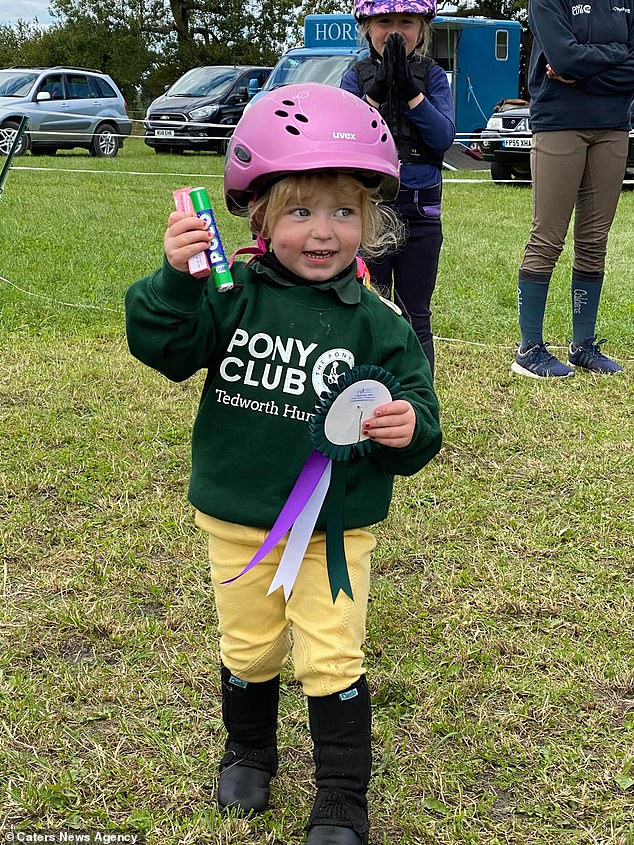 Betsy celebrating after receiving a Rosette and some candy after a competition. She is the youngest member of her pony club branch 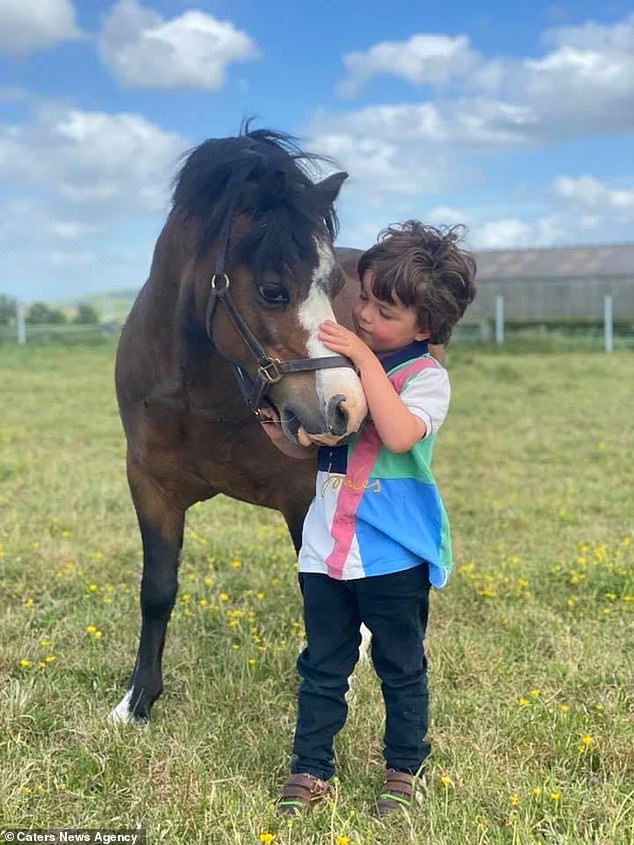 Arley giving a pony a cuddle. Mother-of-two Georgie said the ponies and her children were already ‘lifelong friends’

Sophie Dalrymple, Joint District Commissioner of the Tedworth Hunt Pony club, said: ‘We’re thrilled to have Betsy as part of our team, we always like to encourage children from an early age.

‘We’ve always had a lot of young members but none quite so young as her.

‘Both Betsy and Arley are really good little riders and are very enthusiastic.

‘It’s lovely to see them having so much fun.

‘Being around ponies teaches them responsibility, resilience and is a great life skill.’ 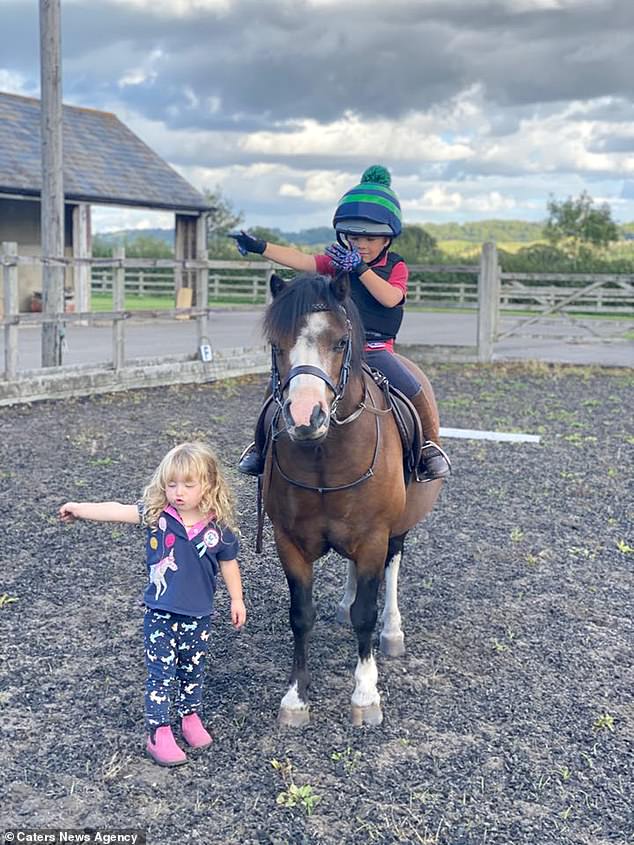 Betsy and Arley horsing around during riding practice with one of their ponies. Georgie said Arley even took his pony on a Zoom session with his class earlier this year