A farmer who started hiring out her goats for Zoom meeting calls as a joke to try and cheer people up amid the coronavirus pandemic has revealed how vicars book ‘Mary’ out for virtual church every Sunday.

Speaking to presenters Ruth and Eamonn Holmes on This Morning, Dot, from Lancashire, explained how people from across the globe have hired the farm animal to join in with family and work video calls.

‘We started it as a bit of a joke to cheer people up,’ she explained. ‘A lot of friends were saying they were having lots of business calls on Zoom and Skype and how bored they were stuck at home and staring at a camera.

‘It completely caught us off guard. We had no idea it’d be this popular. We thought five or 10 people may be mental enough to hire a goat to put on a Zoom or Skype call or whatever but no, it turns out people all over the world want a goat on their Zoom call.’ 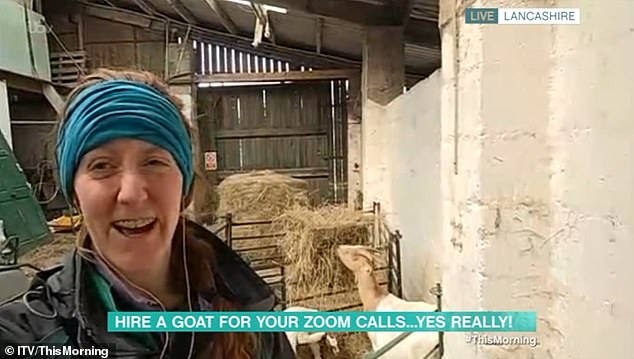 Dot (pictured with the goats), from Lancashire, explained how people can now hire goats to join in with family or work Zoom calls 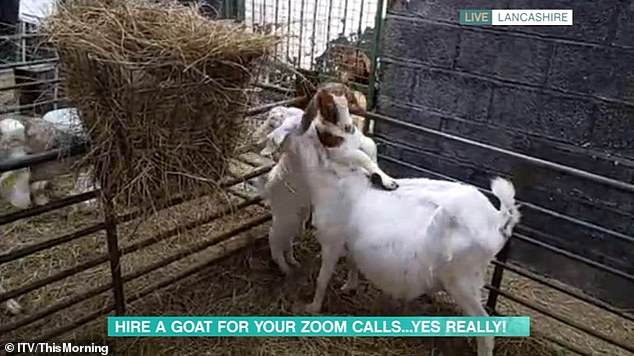 Dot went on to say how there was one goat in particular who proved particularly popular every Sunday – the one named ‘Mary.’ Pictured, with kid, Simone

She continued: ‘We’ve had calls in multiple different languages and from loads of different countries – we’ve had Australia, New Zealand, France, America, Germany and Canada.

‘People are just falling about in hysterics because they’ve sneaked a goat into their meetings and not told their bosses. And their boss is like, “can anyone else see someone else on the call?”

Dot went on to say how there has been one goat in particular who is proving particularly popular on a Sunday – the one named ‘Mary.’

‘Mary – we’ve put her description on the farm website,’ she explained. ‘There’s a few different ones on there to choose from. And Mary, obviously a religious name, but we didn’t really think anything of that at the time.’ 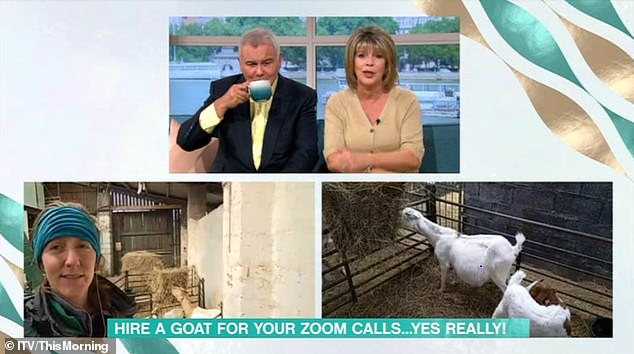 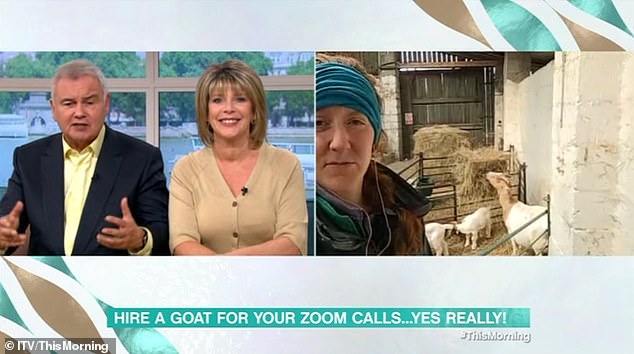 When Eamonn (pictured left with Ruth) joked that Mary (pictured right, with some of the goats) the goat was carrying a bit of excess weight, Dot replied: ‘I hope you’re not body shaming my goat’

‘We just thought it was a cool name for a goat. But every single Sunday since we started going this, about 15 different vicars book Mary for virtual church.’

And when presenter Eamonn joked whether Mary was with child too because she ‘has a bit of a belly on her,’ Dot replied: ‘I hope you’re not body shaming my goat.’

‘She’s just had young Simone who is climbing on her back there. That’s just a bit of post-baby weight,’ to which Ruth quipped: ‘It happens to the best of us.’

Dot also added that some Zoom-ers have got more than they bargained for – and even witnessed a birth.

‘Because of the time of year it just so happens the goats can do these types of calls because they’re all in pens at the moment and the goats are kidding, which means the goats are having have their babies,’ she explained.

‘We’ve had two calls now which have just so happened to be when one of the goats was giving birth. 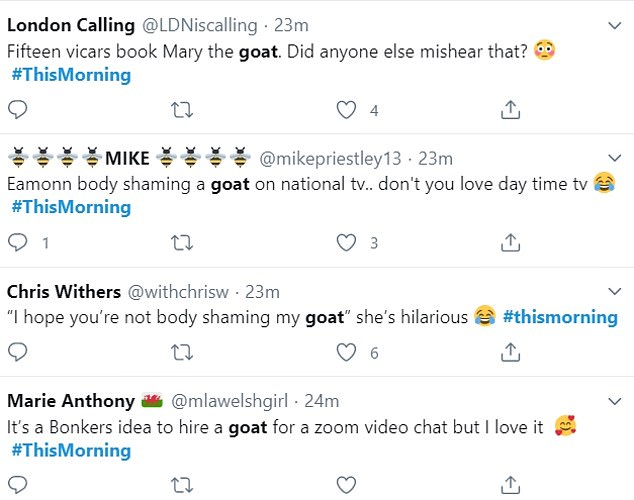 One viewer took to Twitter and penned: ‘It’s a bonkers idea to hire a goat for a zoom video chat but I love it’ (pictured)

‘Both of them were quite big business meetings – and no one was expecting it and didn’t know what to do. They were amazed and mesmerised like, “wow the amazing miracle of life and nature ,” at the same time they were like, “that’s really gory, gooey and slimy.’

Speaking of how she manages to get the goat to look into the camera, Dot explained: ‘Goats are very naturally inquisitive animals. They’re really nosy and want t know what you’re doing and what you’re up to. They naturally want to eat stuff as well which normally involves eating the camera.

And it wasn’t long before amused viewers took to Twitter to praise the light-hearted segment of the show.

‘That farm/goat segment was probably the best thing that’s been on since the whole pandemic started. Real and fun. Can our farmers get some praise too?’ wrote one, while a second penned: ‘Fifteen vicars book Mary the goat. Did anyone else mishear that?’

A third joked: ‘Eamonn body shaming a goat on national tv.. don’t you love day time TV,’ while a fourth added: ‘It’s a bonkers idea to hire a goat for a zoom video chat but I love it.’