The 26-year-old bride paid homage to her grandmother by saying ‘I do’ on October 17 in the same gown the Special Olympics founder wore to wed Sargent Shriver in 1953.

‘My grandmother wore it at her wedding to my grandfather on May 23, 1953, and 67 years later, I wore it to marry Mikey,’ Eunice told Vogue. ‘The dress has aged into a French vanilla ivory, and there are a few holes in it, but I didn’t care.’ 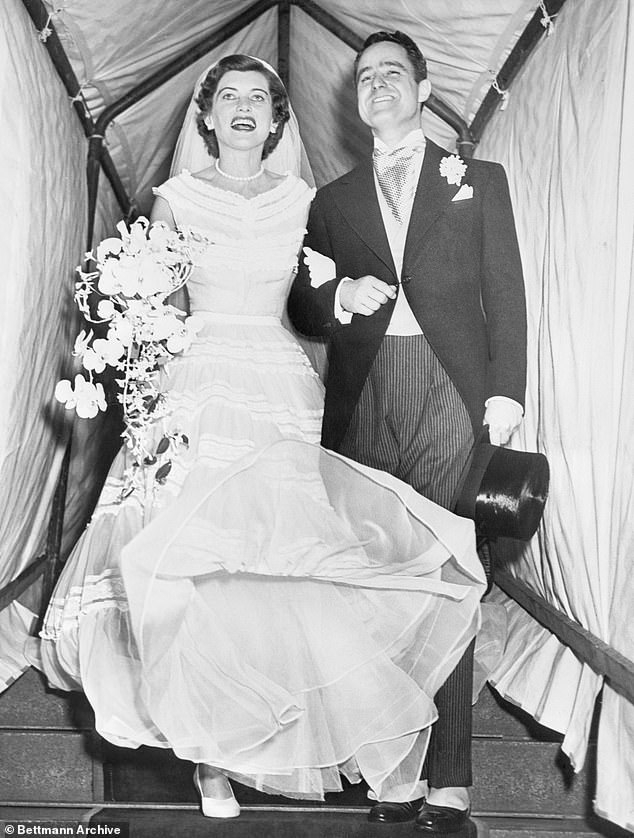 Eunice’s vintage gown fit her perfectly as she and her namesake share the same height and waist, though it did need some work.

The bride enlisted Ever After Miami to help restore her grandmother’s wedding dress and create a new matching bodice and ivory veil for her big day.

‘The dress was as delicate as tissue paper’ she explained. ‘So we had to handle it with great care. I was afraid to even sit!’

Eunice’s gown choice wasn’t her only nod to her grandmother, however. She also arrived at the church in her baby blue 1965 Lincoln Continental convertible.

The vintage car was a gift to her grandmother from her grandfather. Eunice’s dad, Anthony Shriver, has kept it in working condition all these years. 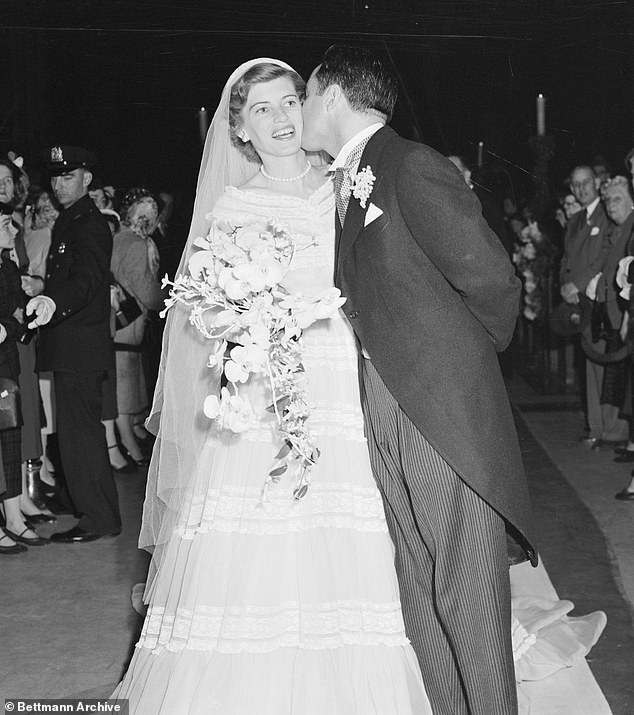 Perfect fit: Eunice’s grandmother wore the gown to wed her husband Sargent Shriver on May 23, 1953. Both grandmother and granddaughter share the same height and waist size 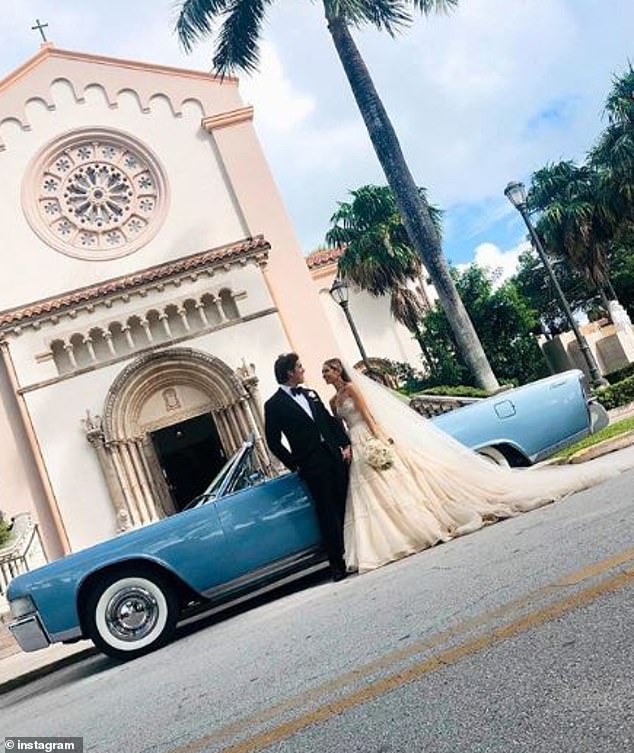 Special day: Eunice was also driven to the church in her grandmother’s baby blue 1965 Lincoln Continental convertible, which was a gift from her husband Sargent

Eunice believes her grandmother may have been responsible for the clear blue skies on her wedding day, recalling how it rained every day for almost a week leading up to the wedding.

‘I think my grandmother wanted to make sure I got to ride in her convertible, she told Vogue of the sudden change in weather.

Eunice’s namesake was a legendary philanthropist and founded the Special Olympics, the world’s largest sports organization for children and adults with physical and intellectual disabilities.

She was one of nine children born to Rose and Joseph Kennedy, and her high-profile siblings included President John F. Kennedy and Senators Robert F. Kennedy and Ted Kennedy.

Philanthropy runs in the family, as the bride is the manager of art and experimental brand development at the non-profit Best Buddies International, which was founded by her father. 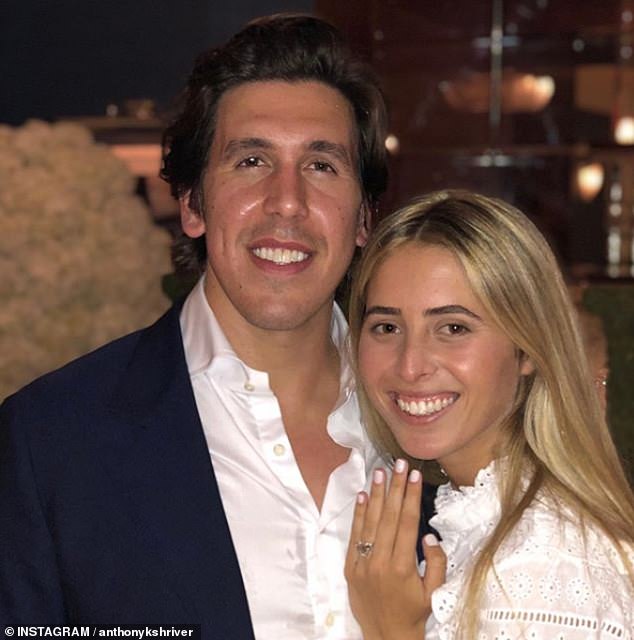 Decisions: Eunice and Mikey had to scale down their 200-person wedding due to the COVID-19 pandemic and opted to throw a ‘micro wedding’ with just their immediate family 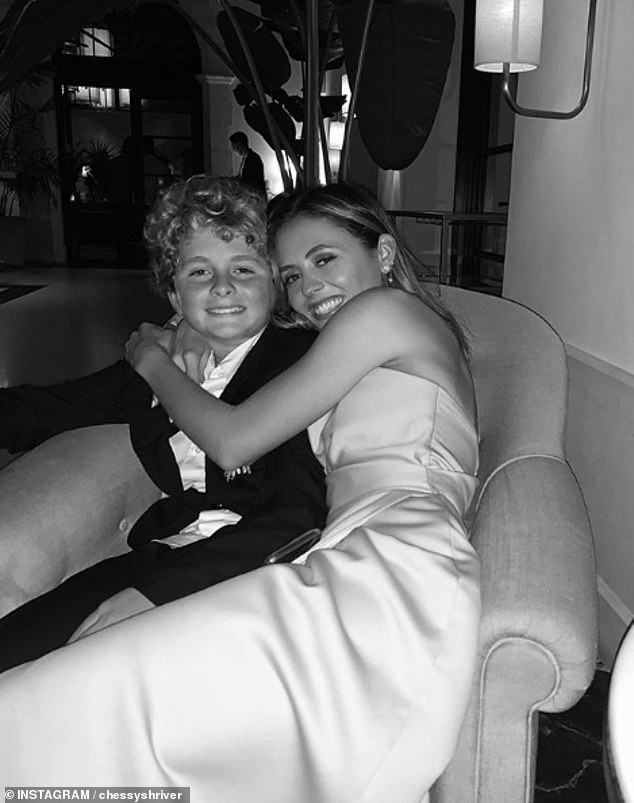 All smiles: The dinner-party style reception was held at the Four Seasons Surf Club. Eunice’s sister Chessy and brother Joey enjoyed a cuddle at the intimate gathering 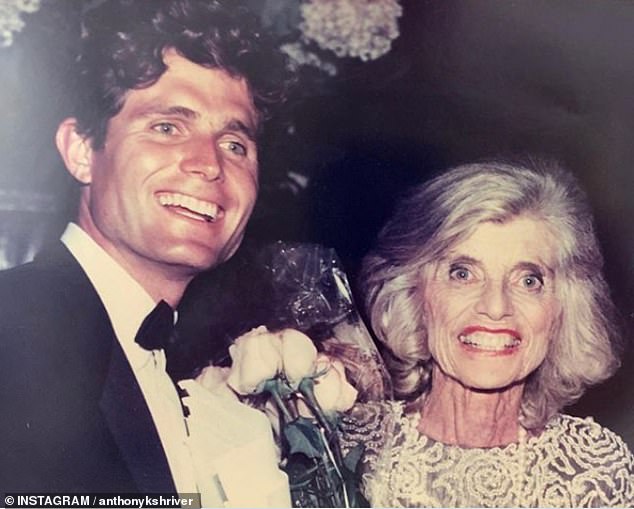 Good luck: Eunice believes her grandmother may have been responsible for the clear blue skies on her wedding day. Her grandmother is pictured with her father

Eunice is the daughter of Anthony and Alina Shriver, and she has four siblings: Teddy, Chessy, Carolina, and Joey. Her groom Mikey, the president and CEO of luxury car dealership Ocean Automotive Group, also comes from a large family.

They had originally planned on getting married in front of 200 guests, which likely would have included her first cousin Katherine Schwarzenegger and aunt Maria Shriver, but, like many couples this year, they had to scale down their reception plans because of the COVID-19 pandemic.

Their parents, siblings, and their families alone made for 32 guests, so they opted to throw more of a dinner party for their immediate family at the Four Seasons Surf Club.

However, the Catholic wedding ceremony was always meant to be held at St. Patrick’s Church, where Eunice’s family has attended mass every Sunday since she was born.

‘Although technically masks and social distancing are not required in places of worship in Florida, St. Patrick’s is very safety conscious and placed distance markings down the aisle and only let our family take their masks off for the processional,’ she explained. 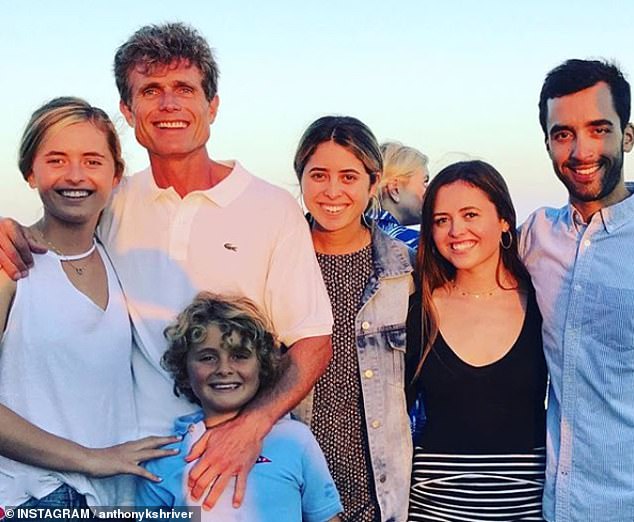 Family: Eunice’s younger sisters, Chessy and Carolina, served as her co-maids of honor, while her brother Teddy read from the scripture during the ceremony. The family is pictured in 2017 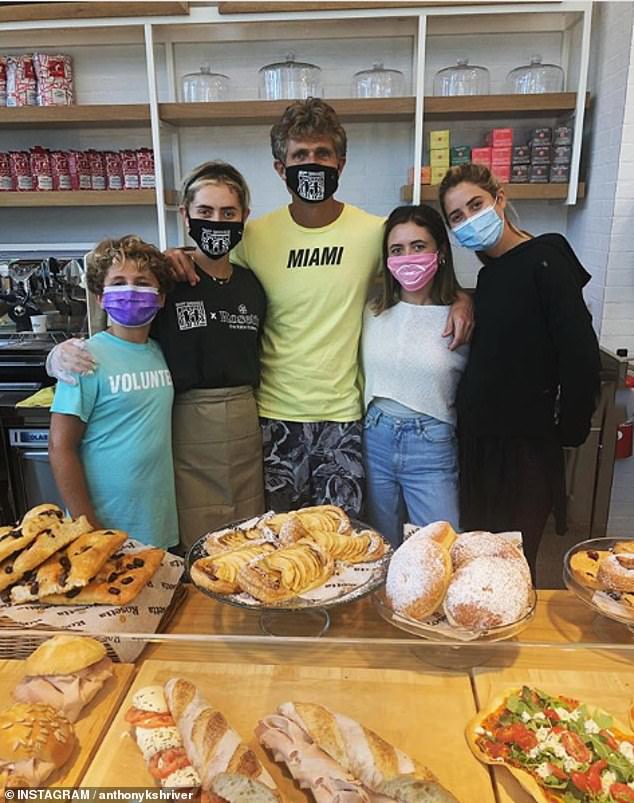 Philanthropist: Eunice is the manager of art and experimental brand development at the non-profit Best Buddies International, which was founded by her father

‘Red tape every six feet down the aisle wasn’t exactly my vision, but it’s part of having a wedding in 2020. The church clergy has been at the bedside of many patients in hospitals and take the pandemic quite seriously.’

Eunice’s looked stunning in her grandmother’s gown as her father walked her down the aisle to meet Mikey, who looked dapper in a Brioni tuxedo and Tom Ford shoes.

Her younger sisters, Chessy and Carolina, wore matching blue Jay Godfrey bridesmaid dresses to serve as her co-maids of honor, while her older brother Teddy read from the scripture during the ceremony.

The two families posed for photos at the church after the ceremony, and Eunice’s father drove the newlyweds to The Surf Club as part of their ‘micro wedding.’

After dinner, the bride changed into the ‘after-party skirt’ created for her by Ever After and a pair of sneakers.

To make their big day even sweeter, she surprised her new husband with a visit from ‘a handful’ of their closest friends.

‘Mikey is Mr. Social, and the small wedding was not his dream,’ she told Vogue. ‘I knew how much it would mean to him to see some of our closest friends to celebrate.’