Ellen DeGeneres‘ short blonde hairdo requires a hefty amount of upkeep for the talk show host, but she was not ready for the coloring mishap she experienced over the weekend ahead of filming.

In her monologue on The Ellen Show on Monday, Ellen was forced to explain to viewers why her hair was significantly shorter and blonder from when people last saw her on screen. 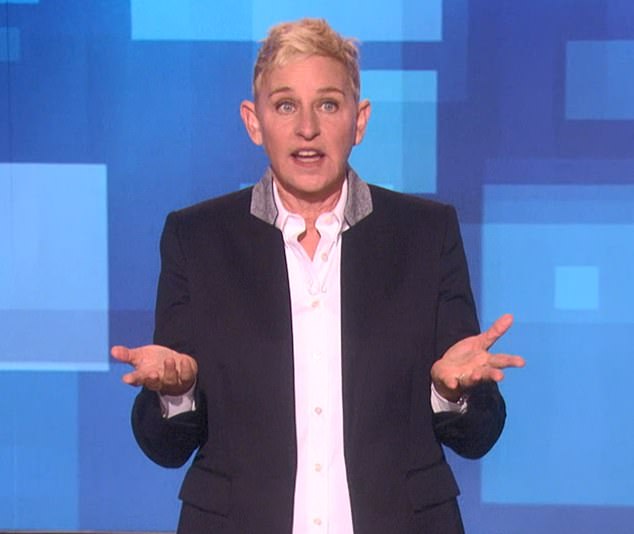 New look: Ellen DeGeneres, 61, appeared on The Ellen Show Monday rocking shorter and blonder hair after getting it done over the weekend 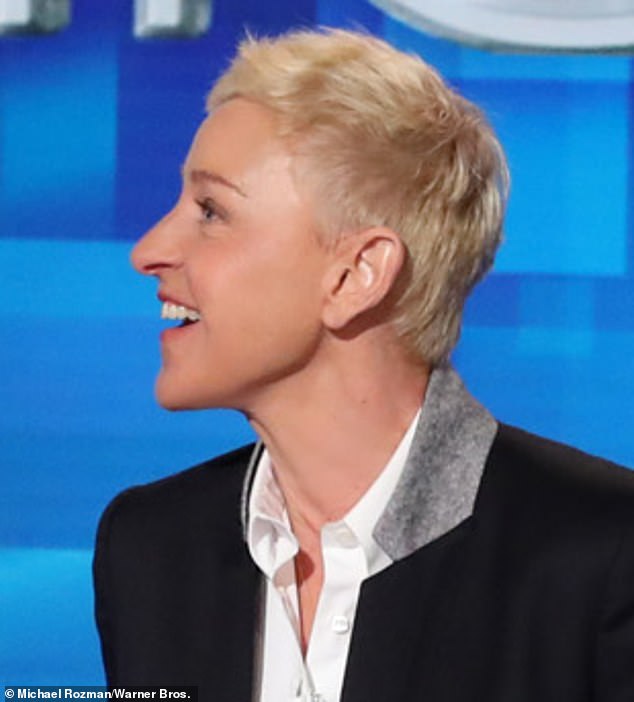 Something new: The talk show host revealed that she’d had to spend the whole weekend having her hair sorted out after the first botched color 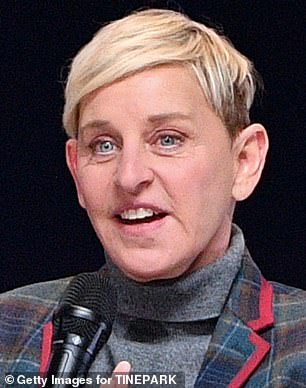 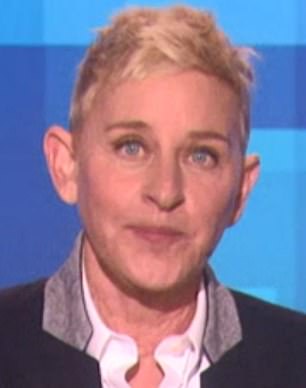 Before and after: Ellen (pictured left in March and right on Monday) said the first coloring attempt went bad because it left her hair with different shades of color running through it

Previously Ellen would get highlights in her hair to keep it the shade of blonde she prefers. But she then recently decided to leave the sides of her hair darker than the tips to add more dimension to the color.

In an effort to quicken the process, Ellen asked at her most recent appointment for her entire head to get dyed one shade — which is called a bleach and tone.

‘It started on Thursday, and it started with the same sentence all bad hair stories start with: “I tried a new person,”‘ she said about her colorist and experience. 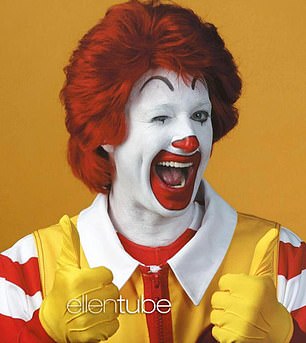 Traumatized: The talk show host joked that Ronald McDonald had colored her hair because of how bad it went

The ill-prepared colorist, who Ellen jokingly compared to clown Ronald McDonald, was unable to create the color the TV host wanted when attempting to dye her hair.

Two-and-a-half hours after the start of her appointment, Ellen was left with a color she did not anticipate.

‘I looked at it in the mirror and was like, “This is not good,”‘ she confessed when detailing the experience.

‘So the person said, “Well, let me try it again,” and they tried it again,’ Ellen said.

‘We were running out of time, and they’re like, “It’ll rinse out. Every time you shampoo, it’ll get better.”‘

At this point in the appointment Ellen said the hair was ‘many colors’ that she didn’t even know how to describe it.

‘I had the pride flag on my head,’ she joked.

Problems continued for the comedian, who realized her hair was starting to fallout due to the damage from the multiple dyeing attempts in the span of a few hours.

Ellen left the appointment unhappy with how her hair turned out. Over the weekend, she told her wife, Portia de Rossi, that she couldn’t leave her hair as is prior to filming The Ellen Show for the upcoming week. 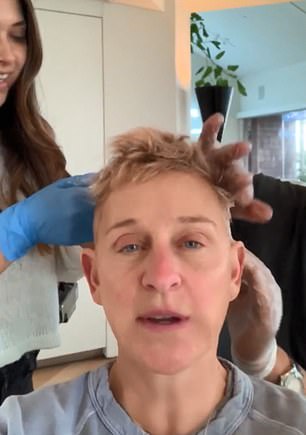 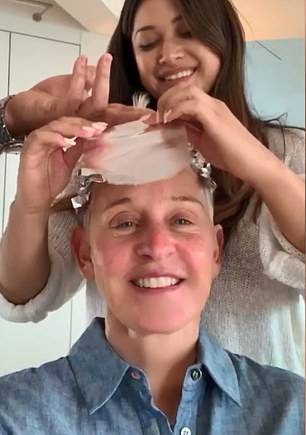 Fix this! After the first disastrous appointment, Ellen called in other colorists to come to her home and fix the damage. They worked hard to get rid of the orange tinge in Ellen’s hair 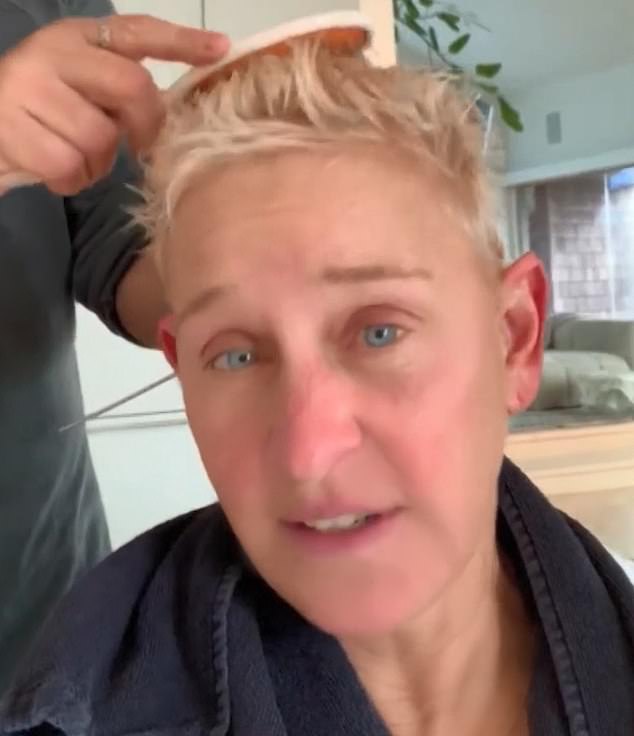 Blonder: The hair is blonder than what Ellen hoped, but she was unable to add any more color as her locks were damaged from the dye

So Ellen called in a different team of colorists to come into her home and attempt to rectify the entire situation.

In a video filmed by Ellen, she showed how her colorist had to individually color each strand of hair and warm it up using the hands, instead of heat, because of how fragile the locks were at the time. 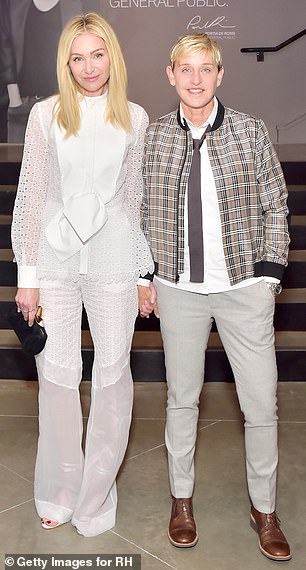 Oops! Ellen admitted that her wife, Portia de Rossi, tried to pretend the original hair color wasn’t that bad – but she quickly confessed her true thoughts after it had been fixed

‘They’re gently massaging each hair, apologizing to it,’ Ellen said in the video while showing the effort the colorists were making to fix the bad dye job.

The colorist was able to remove the orange from her head, but Ellen’s hair is now super sensitive for the next few weeks after the damage the dye caused.

‘I can’t touch it. I can’t wash it,’ Ellen said about the hair. ‘Today I should be fine if I don’t sneeze or blink.’

In a previous interview with DailyMail.com, A-list color experts Rita Hazan – who takes care of A-listers like Beyonce and Madonna – and Sharon Dorram – who has dyed the locks of a host of stars including Julia Roberts and Meg Ryan – revealed their top tips for avoiding dye disasters, particularly when it comes to bleaching the locks.

Both women agreed that caution should be taken when using bleach, with Rita noting that it is a ‘harsh chemical’ that can cause serious damage when not being used correctly.

‘[Dyeing hair blonde is not an easy process, bleach is a very harsh chemical that needs a trained eye and a skilled hand,’ she said. ‘There is a safe way to use bleach but you need to know where to start, how to apply it correctly etc. This is not a “slap on your head and pray” moment.’

Meanwhile master colorist Sharon, who founded Sharon Dorram Color at Sally Hershberger, revealed certain warning signs that people should look out for when working with bleach, explaining: ‘You should never feel or smell your hair burning when doing any sort of color transformation, especially when leaving on your hair for only 20 minutes.’ 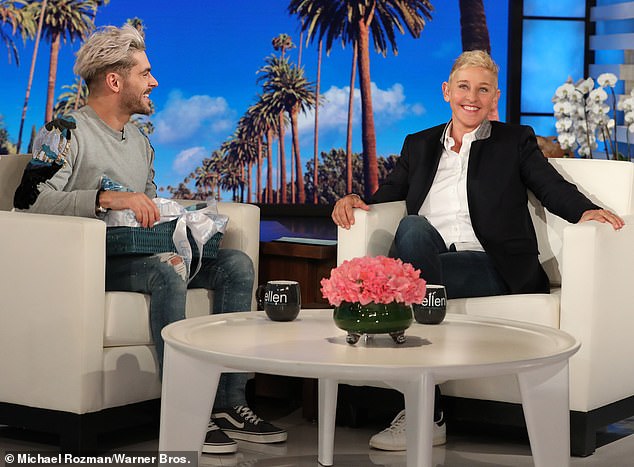 Cheer up! Having Zac Efron as a guest on the show seemed to take away the sting of the dye disaster – although Ellen’s short hair was all the more noticeable alongside his longer locks 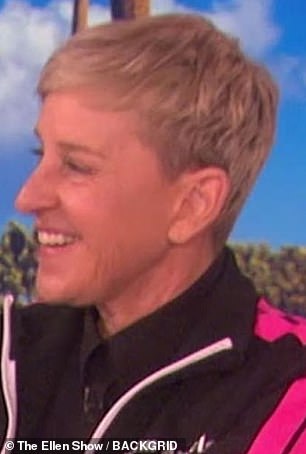 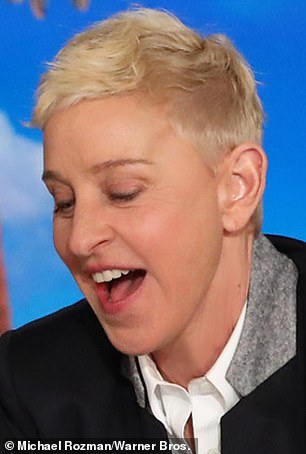 Change: The hairstyle also left her with shorter hair because the dye made her locks fall out. Pictured left is Ellen last week and right is her on her show Monday

If you are unlucky enough to experience a hair dye disaster, like Ellen, both celebrity hairstylists advised that you seek professional help from someone who is experienced in correcting such damage.

‘Stop and run into a salon that is known for corrective color,’ Rita suggested, before noting that most people at this point will have no other option but to cut their hair shorter in order to get rid of the damaged locks.

Sharon was in complete agreement, and she added that someone in this situation should also ask their hairstylist or colorist to take extra measures to look after the hair that they have been left with.

‘Call the best hair salon you have access to,’ she said. ‘Immediately cut off the damaged hair, or as much as you can, and have them apply a deep restorative conditioning treatment or mask.

‘Ask your colorist to apply a protein-based shampoo and conditioner. I’m love using Milbon’s line of Plarmia shampoo and conditioning treatments on clients with badly damaged hair. Adding it into to color itself will help treat the hair by adding proteins to increase the strength of the shaft.’

However, Sharon notes that the aftercare for this kind of damage cannot end after just one salon appointment, saying: ‘After such an intense chemical exposure, you need to make sure you’re doing weekly at home hair masks or treatments to help the hair more elastic.

‘You should also have a reoccurring trim appointment set up for every 6-8 weeks. Having those maintained trims will help the hair grow quicker so you can remove all of the dead hair.’

Haircare essentials to restore and protect damaged or colored hair