An Idaho woman has charmed the internet in death thanks to her very funny Halloween-themed obituary.

Holly Blair died on August 17, 2020 — or rather, according to her obit, she ‘exploded into glitter and bats’.

Written with an incredible sense of humor in the face of tragedy, the obituary makes mention of her heavenly plans to fly on a broomstick and send messages back to her loved ones from the other side via animals. 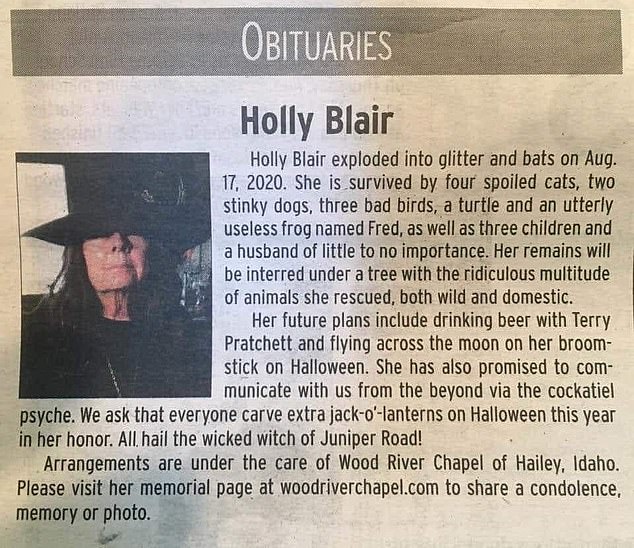 Genius: Holly Blair from Idaho died on August 17 — and according to her obit, she ‘exploded into glitter and bats’ 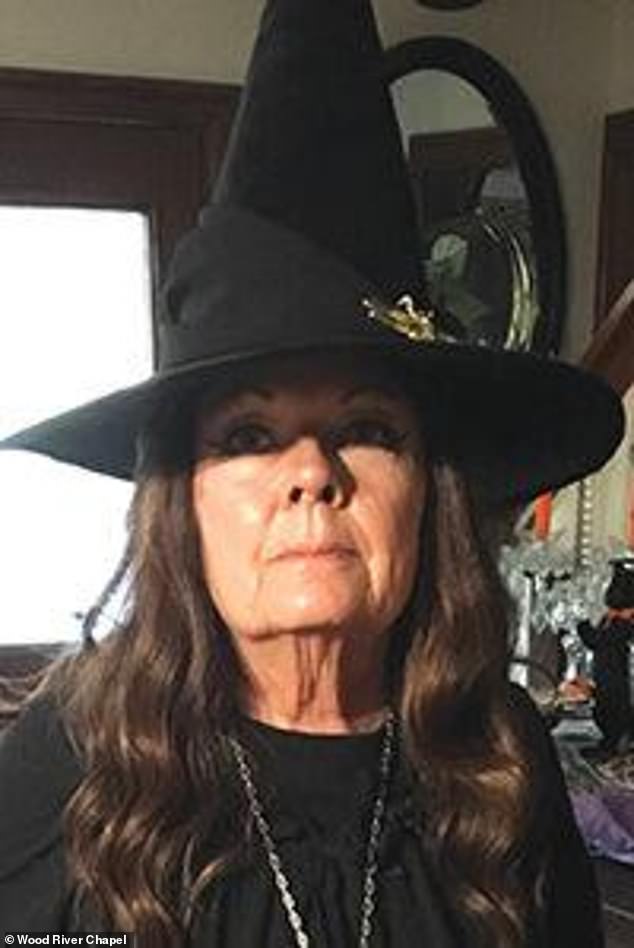 Humor: The obituary makes mention of her heavenly plans to fly on a broomstick and send messages from the other side via animals

The obit, which was written with a Halloween theme in honor of Holly’s love of the spooky seasonal holiday, has taken social media by storm, prompting dozens of strangers to praise the animal lover, hailing her ‘a freakin legend’.

‘Holly Blair exploded into glitter and bats on Aug. 17, 2020,’ the obit begins, and is accompanied by a photo of Holly in a black witch’s hat.

‘She is survived by four spoiled cats, two stinky dogs, three bad birds, a turtle and an utterly useless frog named Fred, as well as three children and a husband of little to no importance.

‘Her remains will be interred under a tree with the ridiculous multitude of animals she rescued, both wild and domestic.’

The obituary then makes mention of author Terry Pratchett, who is famed for his fantasy novels – of which Holly appears to have been a fan.

‘Her future plans include drinking beer with Terry Pratchett and flying across the moon on her broomstick on Halloween,’ it goes on.

‘She has also promised to communicate with us from the beyond via the cockatiel psyche.

Loving it: Holly’s funny obituary has gone viral, with commenters calls it ‘obit writing at its finest’ and ‘fab,’ and describing Holly as a ‘freakin legend’

‘We ask that everyone carve extra jack-o’-lanterns on Halloween this year in her honor. All hail the wicked witch of Juniper Road!’

The funny tribute has quickly gone viral on social media, with commenters calls it ‘obit writing at its finest’ and ‘fab,’ and describing Holly as a ‘freakin legend.’

‘This is the best obituary I have read in ages. Rest in fabulousness, Holly,’ wrote one Twitter user.

‘Well damn, if that’s not something to aspire to, I don’t know what is! #LifeGoals, people. Or would that be #DeathGoals?’ wrote another.

‘If this isn’t how my obituary is written, I’m coming back to life and we are doing it over again,’ said a third.

Others admitted that Holly has inspired them to write their own obituary, with one writing: ‘BRB writing my own damned obit. Holly Blair has inspired me.’

Many people also commented on Holly’s online obituary page, vowing to honor her this Halloween by carving a pumpkin in her name.