Downton Abbey star Dan Stevens is the latest actor to join the cast of HBO Max’s upcoming series The Prince, an animated parody about the British royal family starring a catty Prince George.

The streaming service announced today that Stevens, 38, will voice both the fictionalized Prince Charles and Prince Philip in the satirical show, which is being produced by 20th Television. 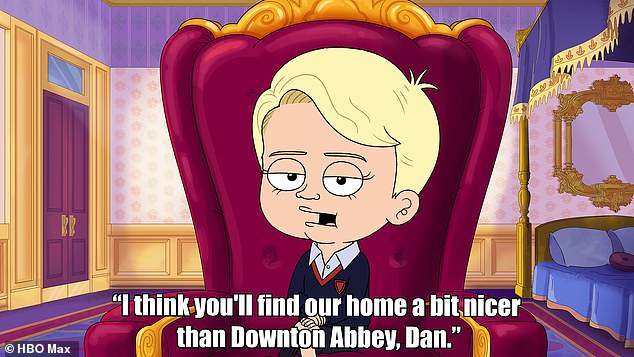 Starring! Downton Abbey star Dan Stevens is the latest actor to join the cast of HBO Max’s upcoming series The Prince, an animated parody about a catty Prince George

Dual roles: The streaming service announced today that Stevens, 38, will voice both the fictionalized Prince Charles and Prince Philip in the satirical show 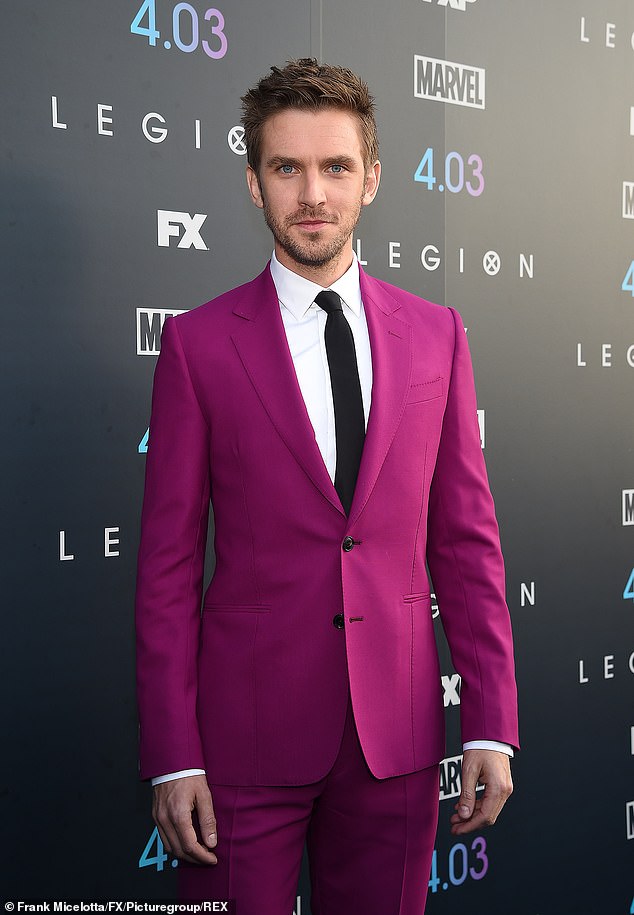 Swap: Stevens is replacing Tom Hollander, who had originally been cast as Prince Philip and Prince Charles

The Prince doesn’t have a premiere date yet, but it’s earned lots of buzz since it was announced in January of this year.

It comes from Family Guy producer Gary Janetti, who has earned a legion of fans for his wildly popular Prince George memes, casting the little boy as a sassy and snarky commentator on all things royal and celebrity.

Janetti’s Prince George regularly mocks his parents, his younger siblings, his uncle Harry and aunt Meghan, their son Archie, and other members of his family.

Since the announcement was made earlier this year, more cast members have signed on, with Stevens most recently taking on the dual roles of the Duke of Edinburgh and the Prince of Wales.

Initially, Tom Hollander had been cast as Prince Philip and Prince Charles; it is unclear why he no longer appears to be associated with the project. 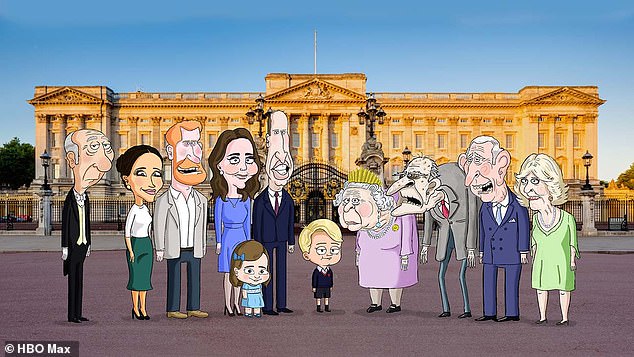 Stay tuned: There is no release date yet for the hotly-anticipated show 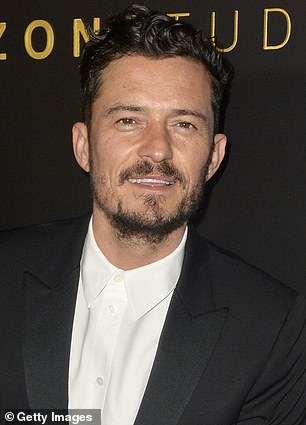 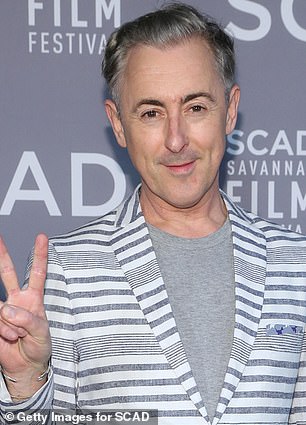 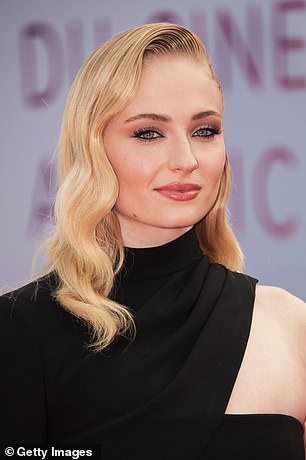 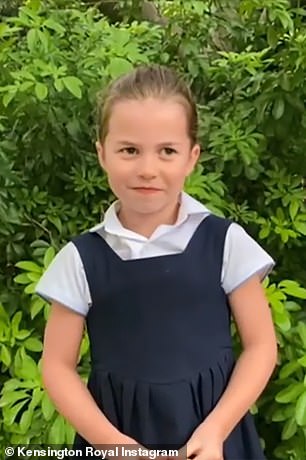 Little sis: The last casting announcement was made earlier this month, when HBO Max revealed that Game of Thrones star Sophie Turner had been cast as Princess Charlotte

The last casting announcement was made earlier this month, when HBO Max revealed that Game of Thrones star Sophie Turner had been cast as Princess Charlotte. 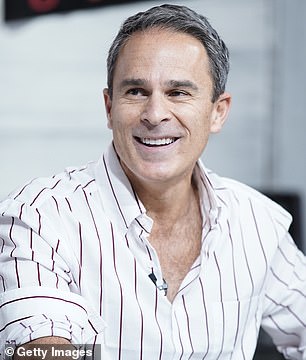 Bright idea: Gary Janetti, the Family Guy producer whose wildly popular Prince George memes have won him a huge Instagram following, is behind the new show

According to press materials, The Prince is ‘a biting, satirical look at the life of Prince George of Cambridge, the youngest heir to the British throne, as he navigates the trials and tribulations of being a royal child.’

‘Before George rules Britannia, he’ll be laying down his own laws in Gary Janetti’s comedic take on the future King of England’s childhood as seen from the prince’s own point of view,’ reads the show’s description.

‘Because his succession isn’t coming any time soon, in each episode George will find his path in life as a young prince in modern times — from the 775 rooms of Buckingham Palace to his family’s sea of corgis to primary school with commoners.’ 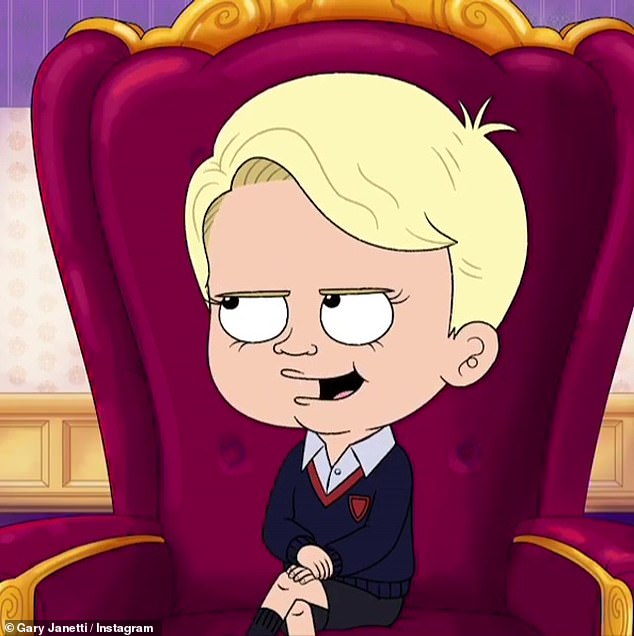 Excited? In one preview clip, Prince George addressed the masses about coronavirus from comfort of his royal throne 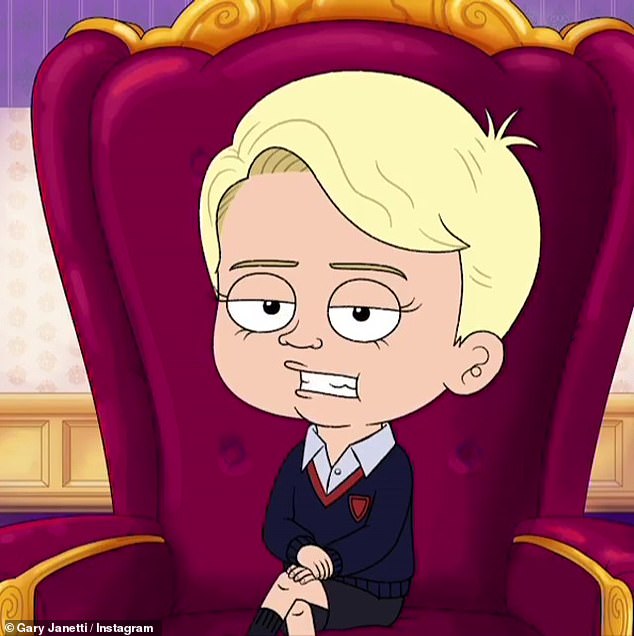 He says: ‘I know self-isolating is difficult and we’re all sick of being stuck in the same 775 rooms… or you know, studio apartments… It’s different for everyone’

So far, Janetti has release two teaser clips from the show. In one, Prince George addressed the masses about coronavirus from comfort of his royal throne.

‘Hey guys, It’s me Prince George. Thought I’d show you all I’m doing okay,’ he says in the animated clip. 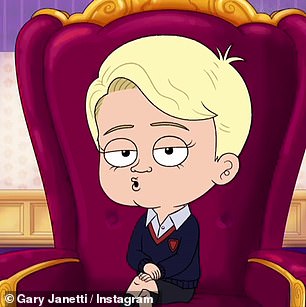 Snooty: The precocious character tells the public: ‘Hang in there! Keep making your little workout videos and cooking tutorials. It’s all helping… Not really but who cares?’

‘Sing Imagine,’ he chirps, referencing the embarrassing viral video of Gal Gadot and celeb friends singing the John Lennon classic in an attempt to cheer up average Joes.

‘Just kidding, just kidding. So out of touch! Cringe, am I right?’ he goes on. ‘Anyway, I know self-isolating is difficult and we’re all sick of being stuck in the same 775 rooms… or you know, studio apartments… It’s different for everyone.

‘But we’re all in this together. Well, not me. I’m not in it with you. But you know, everyone else, you’re in it together.

‘So hang in there! Keep making your little workout videos and cooking tutorials. It’s all helping. Not really, but who cares?’ George goes on as he rolls his eyes.

‘Try to stay positive and above all, be kind to your servants. They’re doing the best they can,’ he says, before muttering under his breath, ‘Even though lunch f***ing sucked today.’ 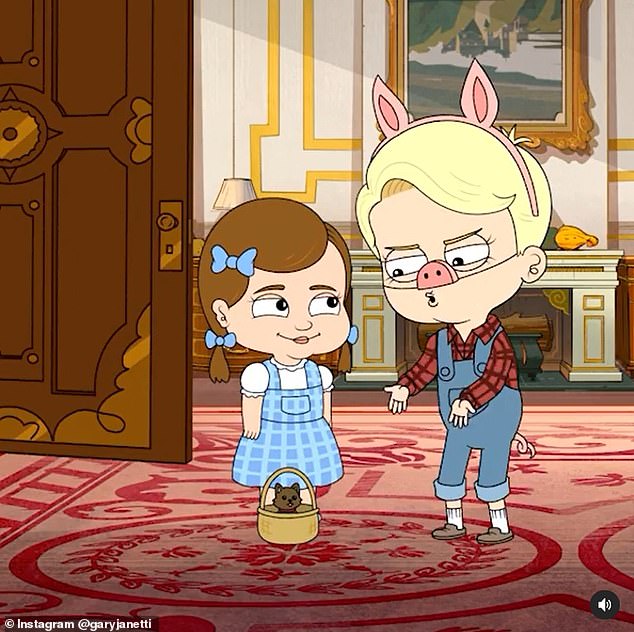 Another teaser clip shows George bossing around his younger siblings

In another teaser clip, cartoon Prince George talks to Princess Charlotte and Prince Louis about a Halloween party.

He says that he, Charlotte, and Louis are dressing up as the three little pigs, before his sister knocks on the door and enters dressed as Dorothy from the Wizard of Oz.

Incredulous, George exclaims: ‘What the hell Charlotte, what are you wearing?’ to which she replies: ‘I changed my mind, pigs are kind of gross.’

‘I know they’re gross, but it’s cute when it’s the three of us,’ the future king pleads, before young Louis enters dressed as a vampire.

Exasperated, George moans: ‘Oh come on, it’s a group costume guys, it doesn’t work unless we all do it.’ 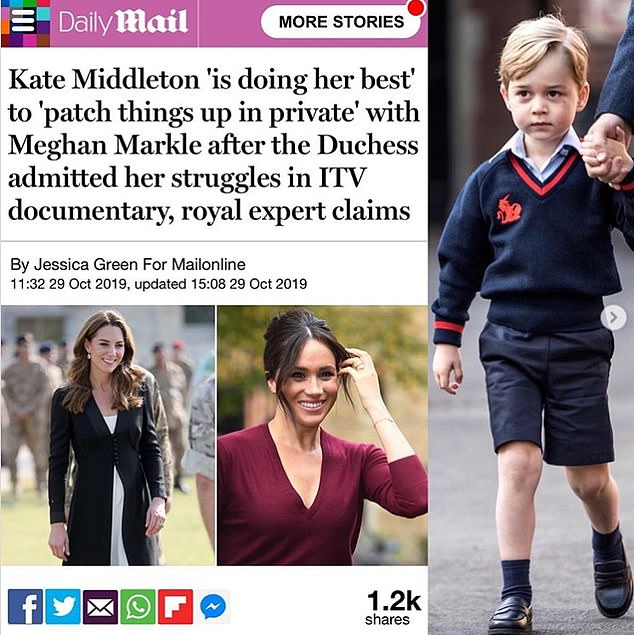 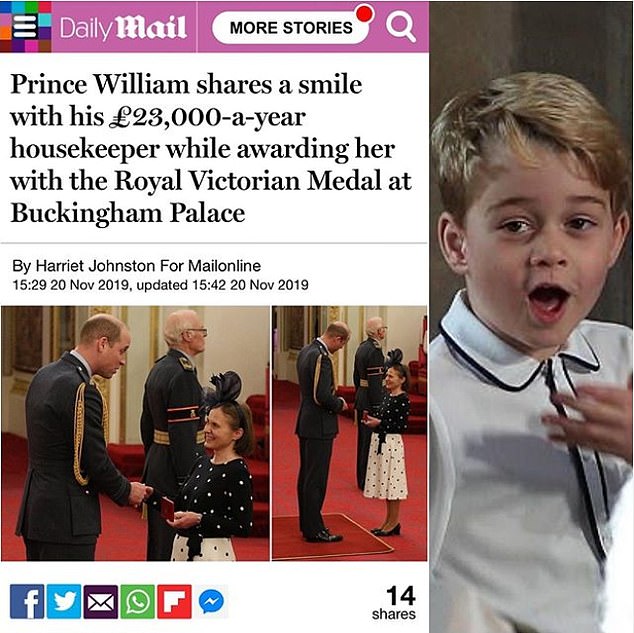 Satire: He casts the little boy as a sassy and snarky commentator on all things royal and celebrity 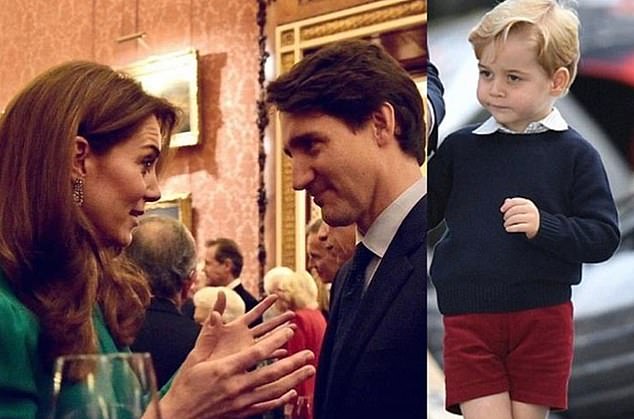 Biting: He mostly comments on his family — and isn’t very nice 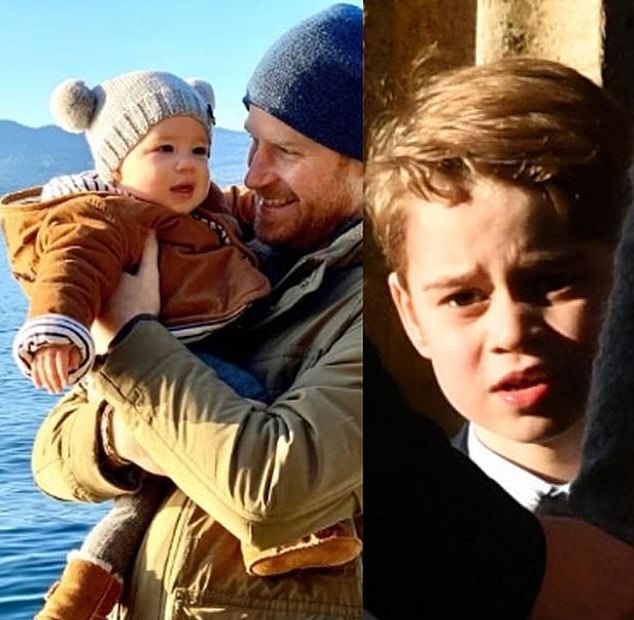 The cutest: The fictional version of the Prince, which viewers will see more of on the show, is competitive with his siblings and cousin

The series is sure to earn attention, just as several of Janetti’s memes made headlines in the past.

Last year, when Princess Eugenie got married, Janetti shared several cheeky takes on the day. Shortly after Eugenie’s nuptials, he uploaded a cute picture of George in his wedding outfit, turning around and looking over his shoulder.

Beside it was a picture of Beyoncé at the Met Gala, striking a similar pose.

‘Beyoncé taught me this move,’ Janetti captioned the snap, as Prince George.

Later, he posted another picture of Princess Eugenie herself, smiling in her white wedding dress and sparkly tiara. It split the screen with a photo of George, also at the wedding, in a snap that appears to have been taken mid-gasp.

‘Oh, s***, THAT’S Princess Eugenie!’ the pictures were captioned. ‘All this time I thought she was one of the maids!’ 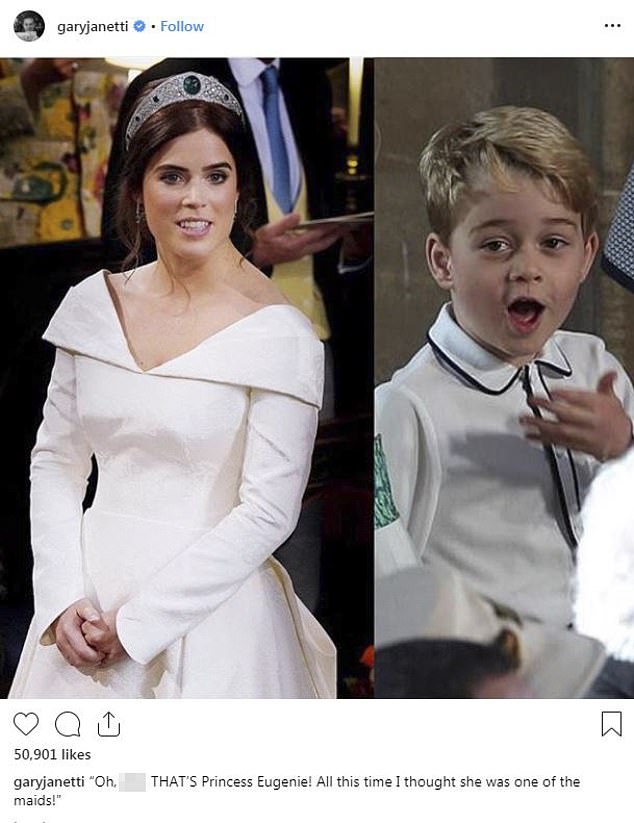 Watch out! He posted quite a bit about Princess Eugenie’s wedding last year 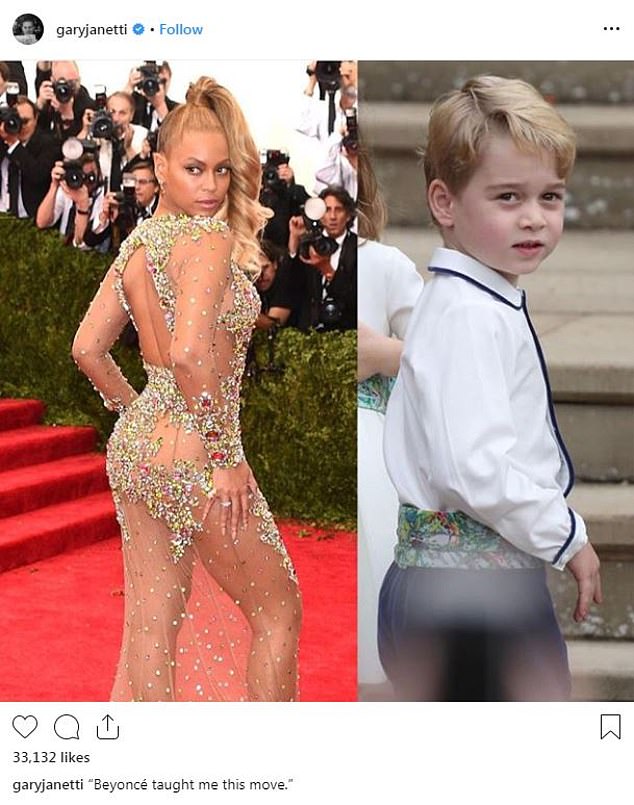 Too funny: His version of the little boy is incredibly sassy and has mean but hilarious criticisms for other members of the royal family 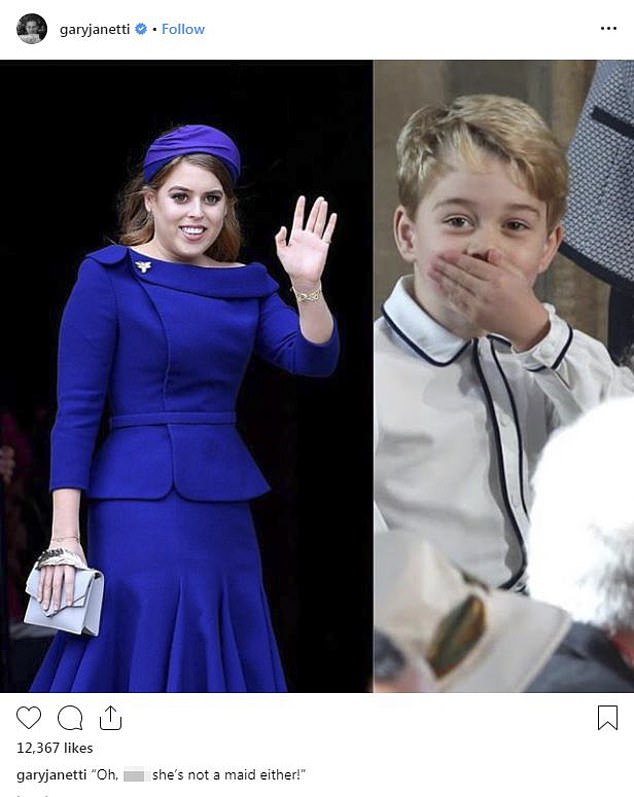 Yikes! On the wedding, he had biting remarks about the bride and her sister Beatrice, having George be surprised to learn they aren’t maids 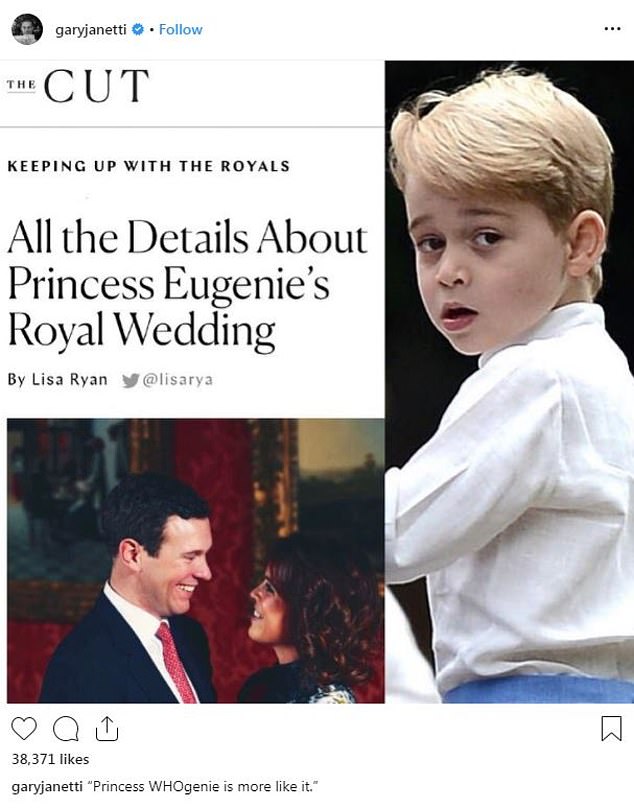 Who cares? His version of Prince George has been perpetually unimpressed with this wedding 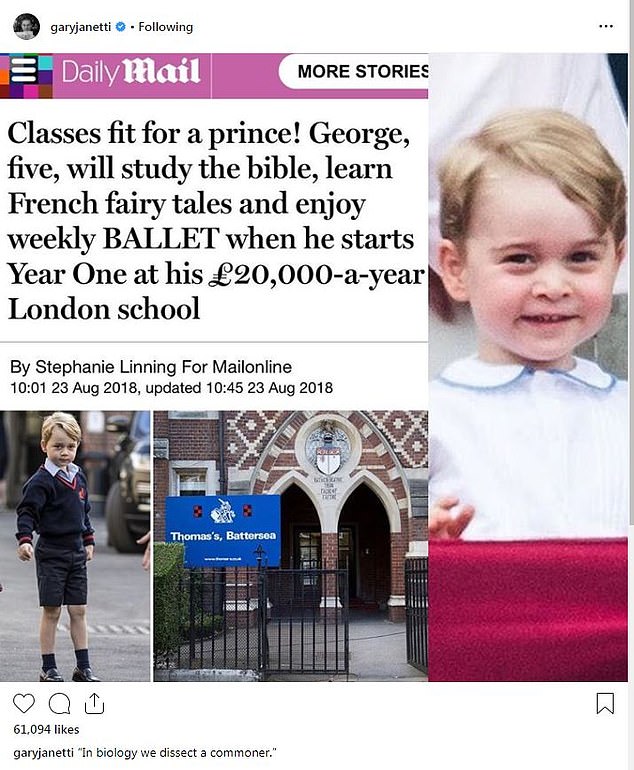 Cheeky: He quipped about a DailyMail.com article about his new school

Later, next to a picture of her sister Princess Beatrice, he wrote: ‘Oh, s***, she’s not a maid either!’

Just before the big day, he posted an article written about the wedding, captioning it: ‘Princess WHOgenie is more like it.’

He’s also taken on Harry and Meghan’s wedding, betrayed a rivalry with Princess Charlotte, and had plenty to say about the recent royal drama.

‘We’re so excited to bring the world Gary’s created on Instagram over to HBO Max, where our viewers can discover what his Instagram fans already know — that George can be hilarious, shocking, and surprisingly sweet,’ she said.

‘We can’t wait to see what Gary does with a bigger canvas to paint on than just a 1:1 square.’

Janetti added: ‘I’m thrilled to be working at HBO Max and bringing them yet another series about a family ruthlessly fighting for the throne.’

The animated cast of The Prince