The couple, who were married in 2016 in the European nation’s second ever royal wedding and the first since the end of communism, welcomed their daughter on 22 October at the Queen Geraldine Maternity Hospital in Tirana.

They named their daughter Geraldine after her paternal great-grandmother, Queen Geraldine, who died on October 22, 2002 – 18 years to the day before the princess’ birth.

Their first family portrait, which was shared online yesterday by Leka, shows Elia cradling the newborn with Leka gazing lovingly over her shoulder. 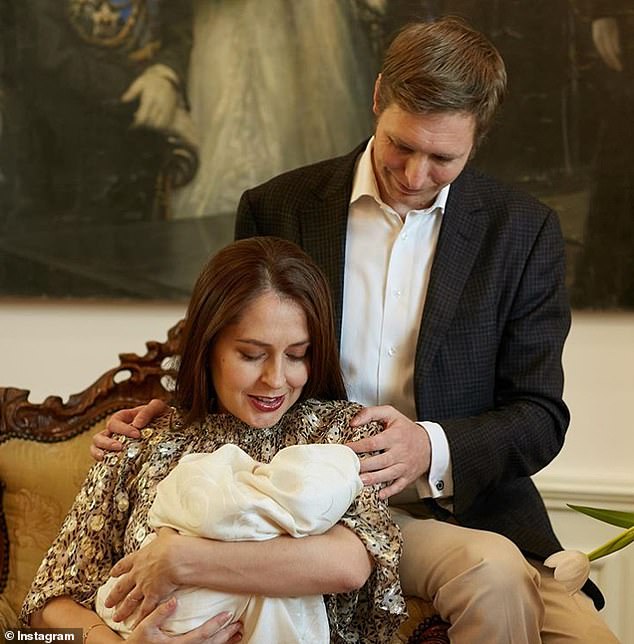 Sharing the picture online, Leka wrote: ‘Dear friends, we cordially thank you for your congratulations on the occasion of the birth of our daughter, Geraldine. Being a parent is a blessing, which thank God we are both enjoying every moment!

‘Our Princess’s birthday was especially exciting, because it came on the day 18 years ago when Queen Geraldine passed away.

‘For both of us it was a greeting from the world of angels!’ 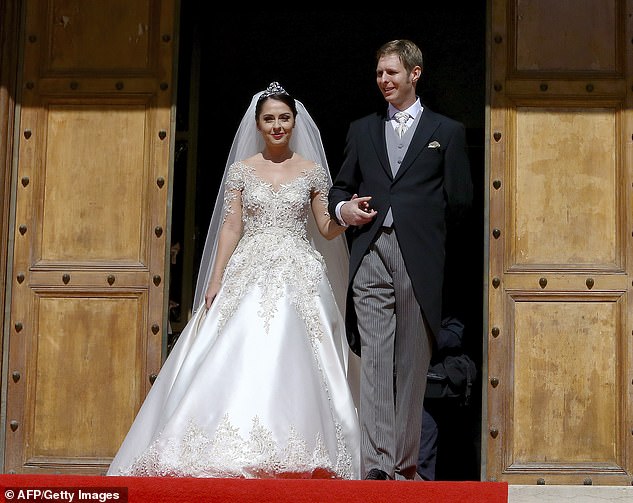 He continued: ‘We as parents wholeheartedly wish little Princess Geraldine to grow up healthy, to have a heart full of love, to love and appreciate life, and for life to caress our little one with tenderness and sweetness!’

WHO IS IN ALBANIA’S ROYAL FAMILY?

Zog I was proclaimed King of the Albanians in 1928 and forced into exile in 1939.

Zog and his wife Geraldine had one son, Leka, who was declared king upon his father’s death in 1961.

Leka and his wife Susan Cullen-Ward had one son, Leka, who assumed the throne in Albanian monarchists’ eyes after Leka I’s death in 2011.

Leka II is married to singer and actress Elia Zaharia.

Announcing the birth last week, the royal court said: ‘Her Royal Highness and her child are both doing well.’

Queen Geraldine was married to King Zog I, who was the first monarch of Albania after it gained independence from the Ottoman Empire but fled his homeland in 1939 when Italy’s fascists occupied the Balkan state.

Despite the monarchy having been dissolved, Zog’s son King Leka remained head of the House of Zogu and claimant to the throne until his death in 2011 and was succeeded by his only son, Leka II.

The Crown Prince, who attended Royal Military College Sandhurst and has worked as an adviser to Albania’s president, succeeded his father as head of the House of Zogu, and titular King of the Albanians.

As Leka II currently does not have any sons, his current heir presumptive is Skënder Zogu, his first cousin once removed.

Leka II married Elia Zaharia in a lavish ceremony in 2016, with around 20 royal families from across the world in attendance including Prince Michael of Kent -the first cousin of Queen Elizabeth II. 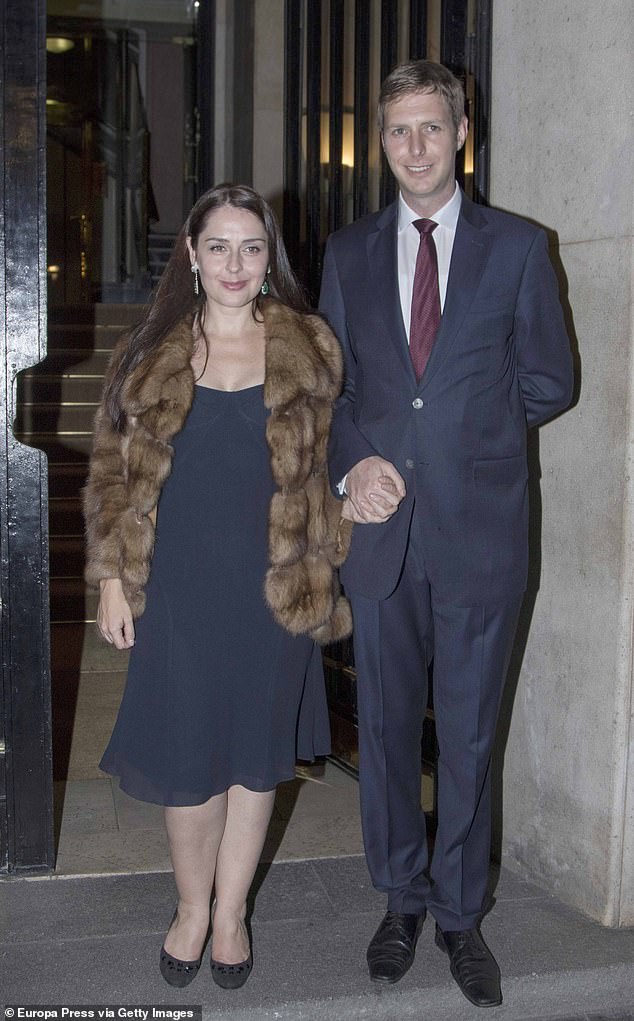 The couple  (pictured in Madrid in 2016) announced the birth of their first child, a baby girl named Geraldine, last week

Princess Léa of Belgium and Queen Sofía of Spain were also present at the opulent ceremony in Albanian capital Tirana, where the couple now live.

Leka II and Elia, who were engaged in Paris in 2010, now preside over the Queen Geraldine Foundation.

Albania’s royal family was expelled from the country in 1939 after it was invaded by Italian fascists. 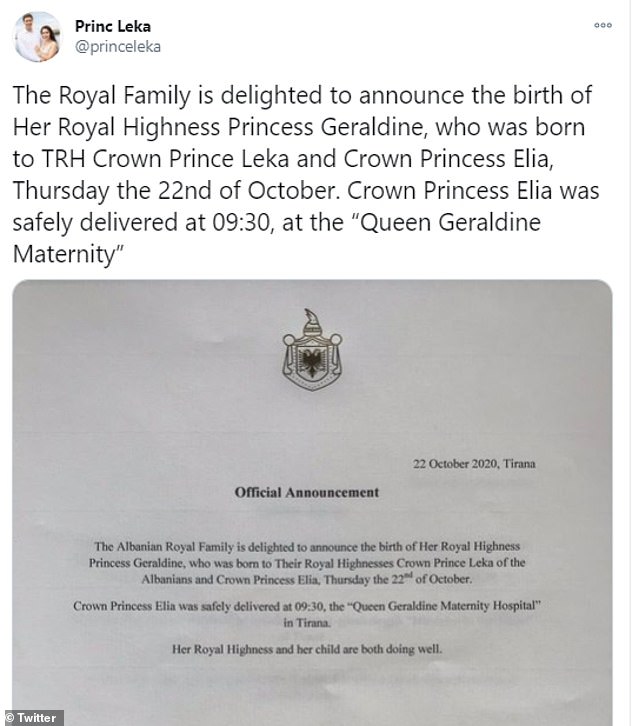 ‘Her Royal Highness and her child are both doing well,’ the royal court said in a statement announcing the birth (above), adding that they were ‘delighted’ with the news

After World War II, when the Communists took over the country, King Zog and his family were considered traitors and stripped from power completely and removed from history books.

Following their exile, the Albanian royal family spent time in Greece and Turkey before settling in England, where they briefly resided at The Ritz in London.

King Zog and his family then moved to Egypt before the monarch spent the remainder of his life in France.