A couple who were quoted £1,500 for a playhouse have revealed how they used budget buys to build their own version for their four-year-old daughter’s birthday.

Amy Townsend, 27, and her partner Morgan, from Haverfordwest, Pembrokeshire, were determined to make their daughter’s dreams come true with a playhouse a reality despite the inflated prices.

The couple were stunned to find online pink playhouses were priced online for an eye-watering £1,500.

However they decided to build their own, crafting the stunning white and pink wooden home for just £400 using budget buys and old pieces of wood. 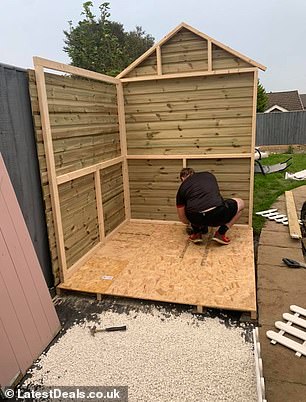 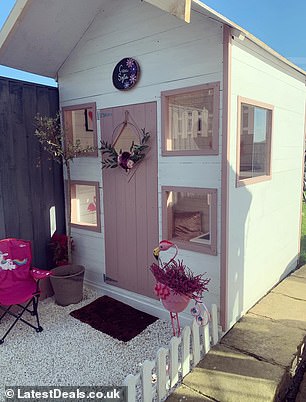 Amy Townsend, 27, and her partner Morgan, spent £400 on a DIY playhouse ahead of their four-year-old daughter’s birthday (left, while Morgan was building the playhouse, and right, the finished product) 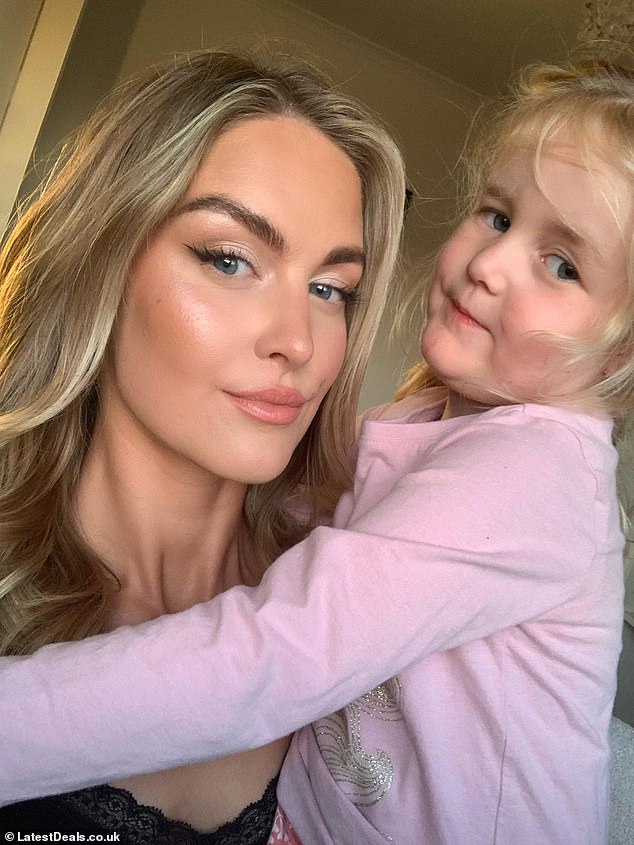 Amy said her partner Morgan, who is ‘quite handy’, offered to build the playhouse using wood they already had from previous projects (Pictured: Amy and her daughter)

Mother-of-one Amy, who is a salon owner, told money-saving community LatestDeals.co.uk that they are ‘delighted’ with the results of their DIY project.

Amy said: ‘We came up with the idea as it was my four-year-old daughter’s birthday in September.

‘I’d been looking at playhouses for a while online and they all seemed so expensive for the size, plus almost all of them were out of stock and couldn’t be delivered in time.

‘I really wanted one with an upstairs but just couldn’t afford to buy one that expensive because they were upwards of £1,000.’ 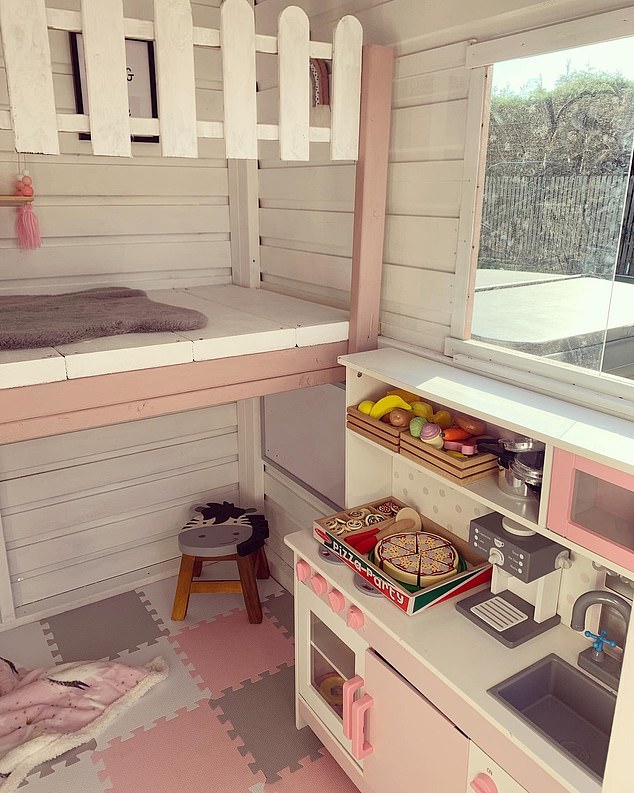 Amy said her partner built the playhouse from scratch using photos she had sent him for inspiration (Pictured: Interior of the playhouse)

What did Amy’s playhouse cost?

She continued: ‘My partner Morgan who is quite handy and has a passion for woodworking told me he could build me a playhouse twice the size for the same amount as the smaller ones I was looking at.

‘He used wood we already had from previous projects and bought some new treated shiplap cladding, OSB Boards for the floor and roofing felt from our local Wickes store.’

Amy explained: ‘To build it, Morgan created a frame for each side first in the workshop he has. We used Perspex for the windows and the sliding window on the side.

‘He’s used to working with wood so it only took him four days to make the actual frame. 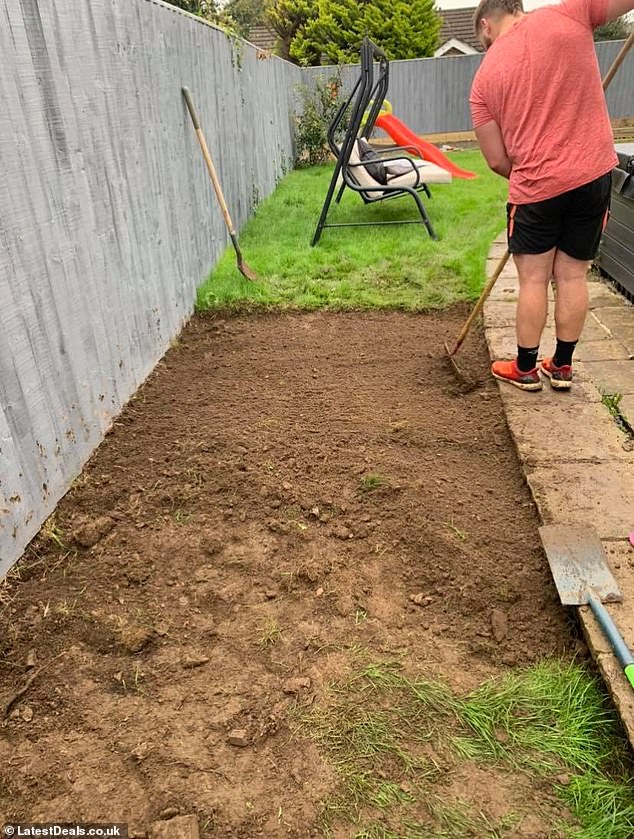 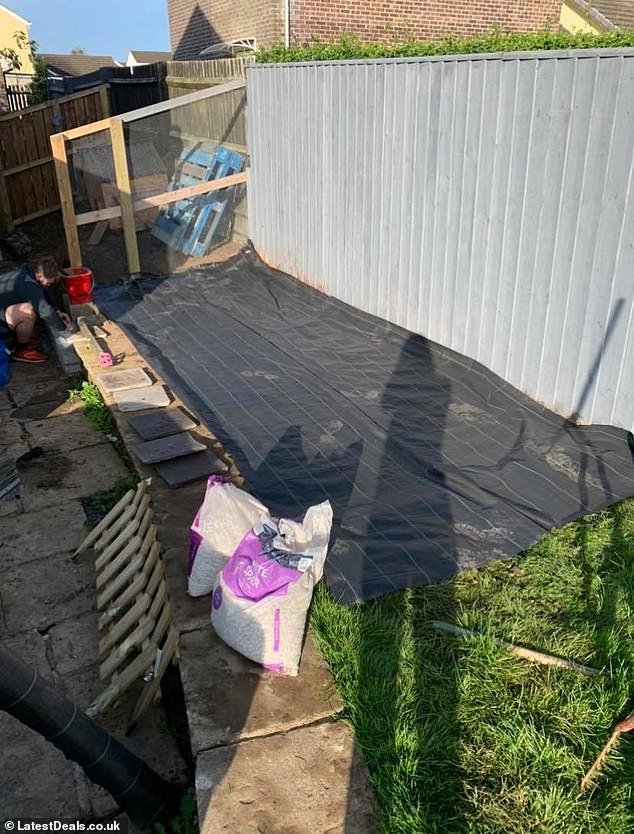 Amy said it took her partner Morgan less than a week to make the playhouse. Pictured: The process of building the playhouse

‘Even if we had bought a playhouse online we would have had to build it ourselves.’

She continued: ‘He built it from scratch inside his workshop from a few inspiration photos that I sent him to make sure it had all the features I wanted.

‘He then brought all four sides over to our house to build in the garden.

‘We dug up an unused piece of our garden and covered it in weed membrane and stones to create a small area in front of the playhouse for her. 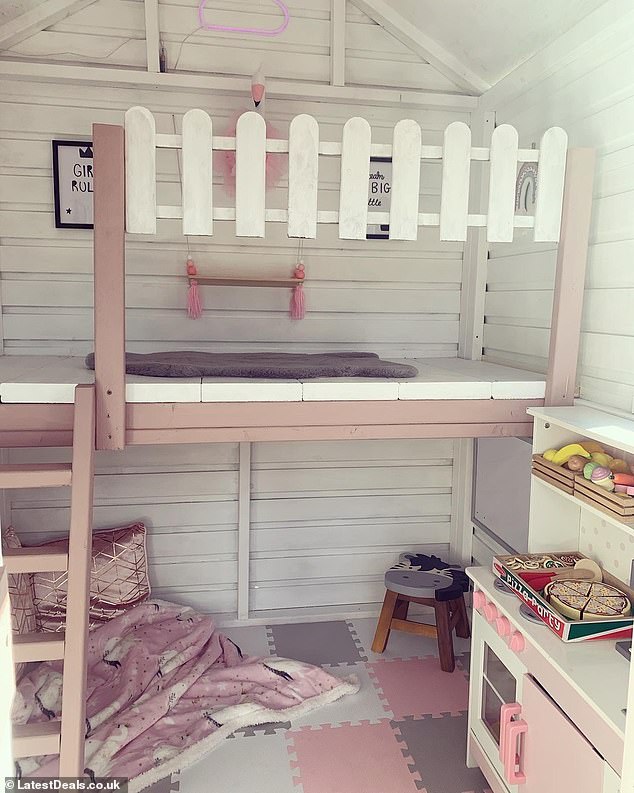 Amy said her partner built the playhouse from scratch using photos she had sent him for inspiration. Pictured: Interior of the playhouse

‘I painted the inside and outside myself with Frenchic Alfresco Paint in Dazzle Me and Dusky Blush which I got from a local stockist, Connie & Jo.

‘It cost £350 to buy the paint and wood, and around £50 for all the interior bits, which were all from B&M, ASDA and Amazon. I made the prints myself.

‘It took Morgan just under a week to make.’

Amy revealed her daughter was over the moon with their finished DIY playhouse.

‘She absolutely loves it and has played in it every night since,’ Amy said.

‘It was really helpful having a project to stay busy with during lockdown and it made it really special as my daughter has been stuck inside for six months unable to go and play anywhere other than our house!

‘It was really important to us to save as much money as we can because I have my own beauty business and, during the lockdown, I wasn’t able to work for five months so I didn’t have the funds available to buy her the house I wanted. 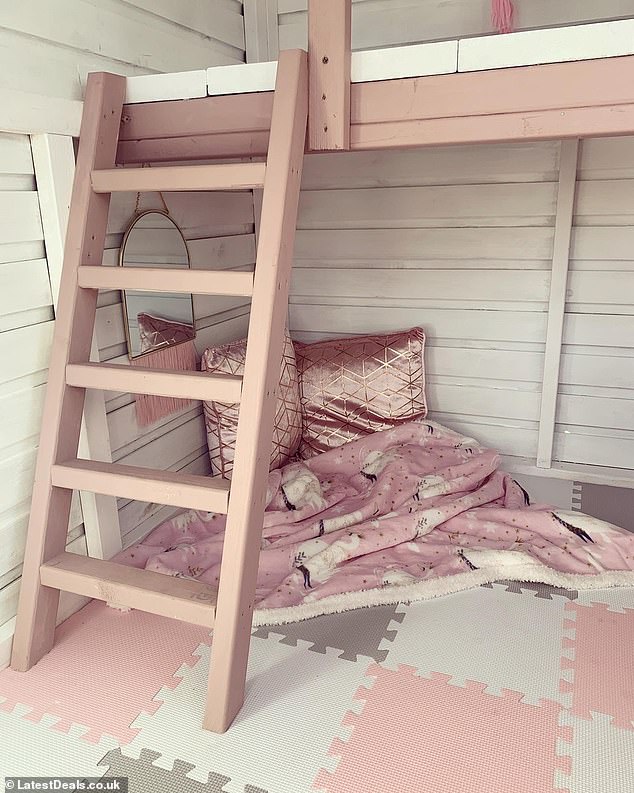 ‘It made me feel so happy to be able to give my daughter the playhouse I wanted for her for far less. It also means we will have the extra money ready for Christmas!

‘It also feels special to know that my partner has made it himself and that no-one else will have a playhouse like this!’

Tom Church who is the co-founder of LatestDeals.co.uk, added: ‘With kids spending more time at home than ever thanks to the lockdown, many parents have been begged for garden playhouses. 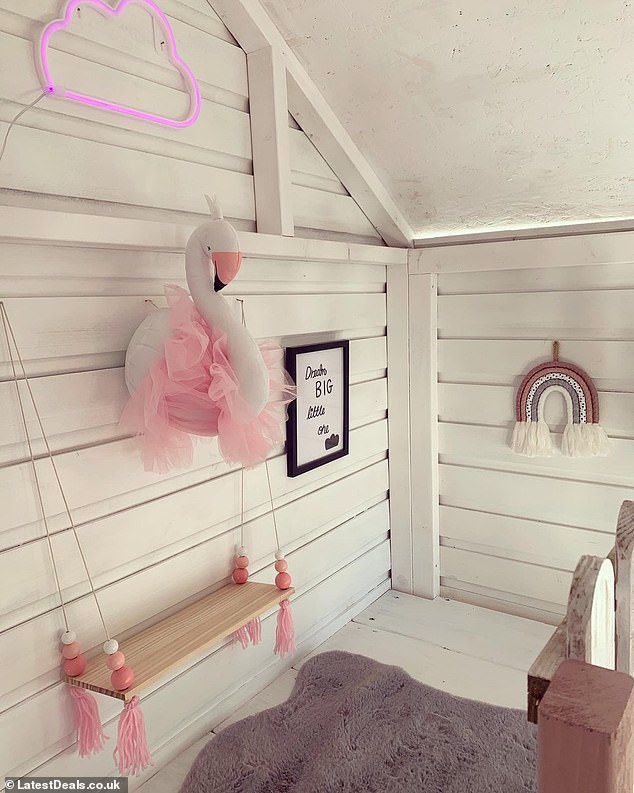 Amy said building the playhouse has ensured that they have extra money ready for Christmas Pictured: The interior of the playhouse

‘However, as Amy points out, these can cost a pretty penny to buy online.

‘If you’re handy with tools and are up for a challenge, make like Amy and Morgan and build your own for less than a third of the price!

‘You’ll have a fun family project on your hands, will save hundreds if not thousands of pounds, and best of all, your child will end up with a totally unique and bespoke playhouse just for them!’