Ugly House to Lovely House viewers have branded George Clarke ‘totally irresponsible’ for ‘encouraging’ a couple to turn to credit cards in order to fund the £145,000 renovation of their cramped 1930s semi-detached home.

Helen and Greg Watson, from Sheffield, appeared on the Channel 4 programme last night and said they hoped to transform their home with a £120,000 budget in time for the arrival of their third child.

But the couple’s efforts were hampered by poor weather and the Covid-19 crisis, which put their renovations three months behind schedule.

As George visited the couple to see their finished home, Greg admitted they had been forced to take out extra credit cards and begged for money from their parents in order to get an extra £25,000 to get their home over the line.

But viewers were unimpressed with the renovation, with some saying the programme had ‘encouraged’ the couple to spend more than they could afford, with one writing: ‘Feel this is totally irresponsible to encourage people to go further into debt using credit cards etc.’ 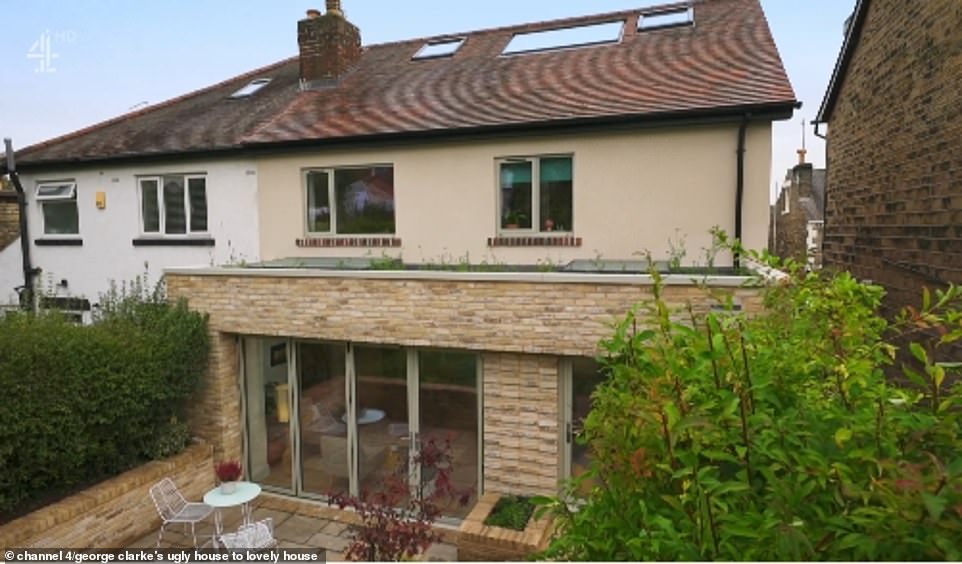 Ugly House to Lovely House viewers branded George Clarke ‘totally irresponsible’ for ‘encouraging Greg and Helen Watson, from Sheffield, to use credit cards’ to fund the £145,000 renovation of their cramped 1930s semi-detached home

‘Who the h**** does that? You’ll never make it back. Absolute idiocy, and although it was nice, that’s all you could really say. There’s no way it was worth anything like.’

The couple bought the cramped semi-detached home in one of the most expensive areas of Sheffield months before the birth of their third child.

Helen and Greg said they had moved seven times in nine years so hoped they could make the three bedroom house their dream property for the future. 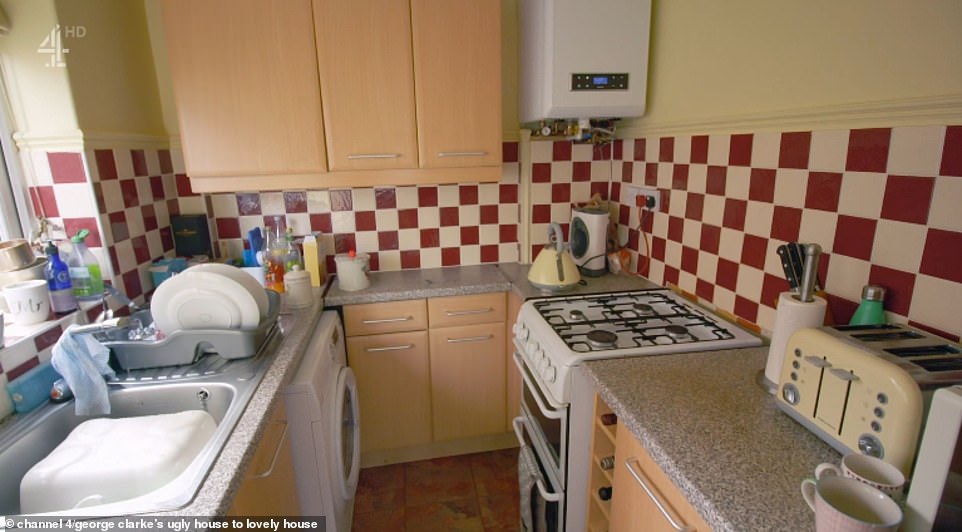 The couple, who said they hoped to transform the dated three-bedroom semi-detached house into a stunning forever home, pointed to the tiny kitchen as one of the main flaws of the property 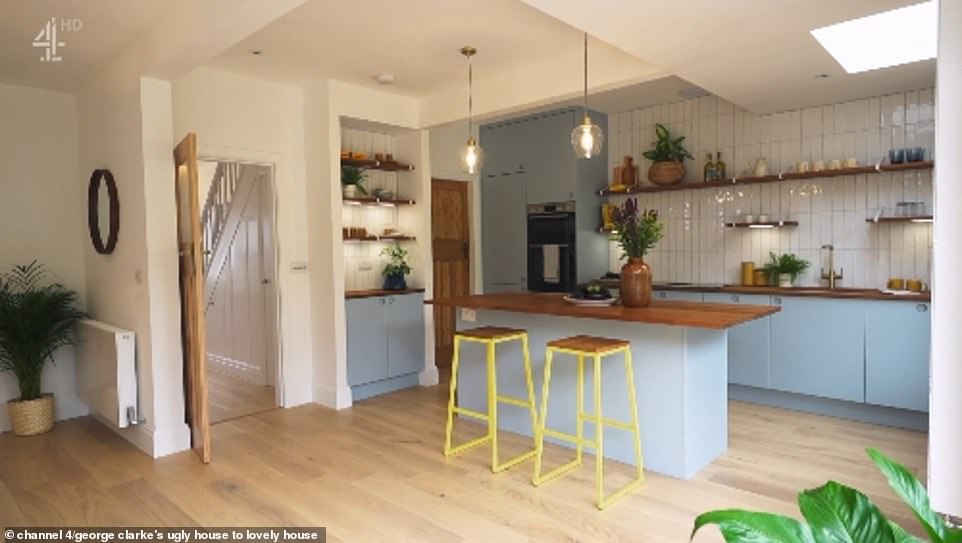 Helen and Greg ended up spending £20,000 over their original budget as they extended the semi-detached home out to the side, into the loft and out into their garden to make space for their new ‘open plan’ living

But they admitted they felt uninspired by the current state of the property, with the exterior of the three-bedroom house clad in less than desirable fake stone and featuring dated UPC windows.

Helen confessed that the current layout was also impractical for the soon-to-be family of five, with a tiny kitchen, and only three bedrooms in the house.

They were in a hurry to complete the renovations within six months ahead of the birth of the baby, but Helen admitted: ‘A finished house feels a very long way away at the moment.’

Greg told George that their budget was £120,000 and said they had ‘no contingency’ for any further changes to the budget. 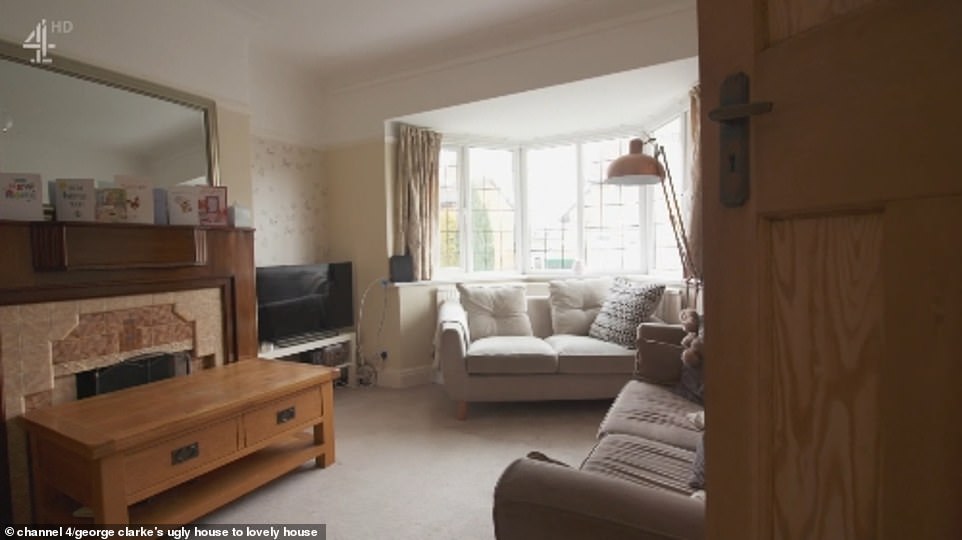 The couple said they hoped to transform the dark and drab home was dark and drab into a stunning family property that they could spend forever inside (pictured, their lounge) 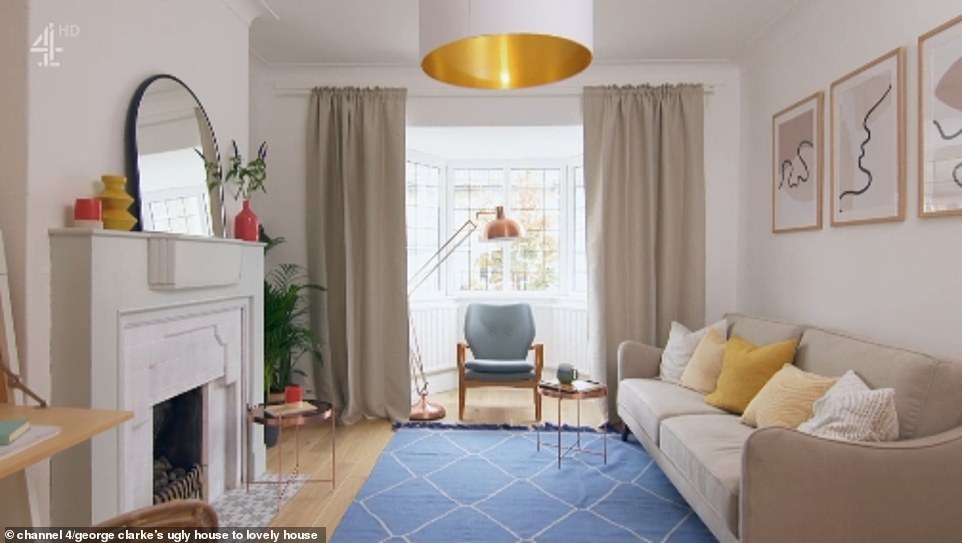 But George assured them, saying: ‘You can do it. You’ve just got to be careful you don’t spend two thirds of it on structural work and don’t have enough for kitchens and bathrooms.’

The presenter bought in architects Howard Evans and Prue Childs, who have built a reputation for transforming dated buildings into functional homes.

Howard said: ‘Our role is to be environmentally responsible but we believe our buildings should be beautiful.’

The architects planned a side extension and a small back extension, and planned to extend further into the attic space. 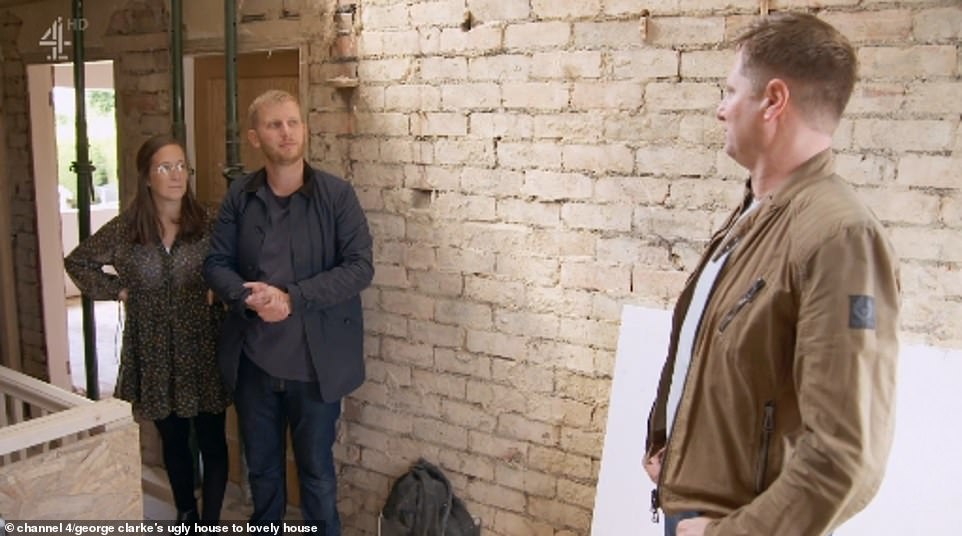 The couple were wary about the cost of the plans from the outset of the ambitious project, and later admitted they had had to turn to credit cards and begging their parents in order to add finishing touches to the home

But when the plans were revealed to Helen and Greg, they admitted they were underwhelmed by how large the back extension was.

Greg immediately confessed he had worries about the cost of the renovations, saying: ‘What’s going through my mind, is how are we going to be able to afford it? We’re going to spend every penny we have and then some.

With only limited funds, Howard and Prue focused on revamping the rear of the property and, despite their initial renovations about the size of the extension, Greg and Helen come round to the idea and said they were excited. 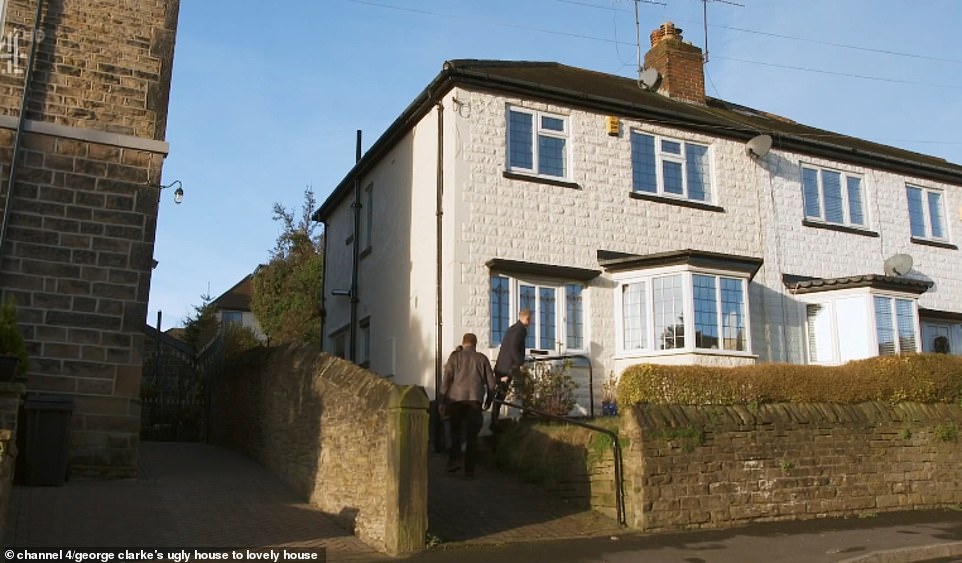 The 1930s semi-detached three-bedroom property was in a desirable part of Sheffield, but clad in a unattractive fake brick work which the couple admitted they hated (pictured, before)

While Helen and the children moved across town to her parents house, Greg stayed in the property and took several weeks off work in order to help out on the site.

He said: ‘The plan is for me to be on the inside, stripping everything out. Hopefully I’ll add some value, rather than just get in the way.’

But the wettest February on record caused massive delays for the couple, before the Covid-19 crisis kicked in and lockdown ground everything to a halt.

With a national lockdown in place, the project was delayed by weeks and when the builders were finally back on the site, they were hugely delayed. 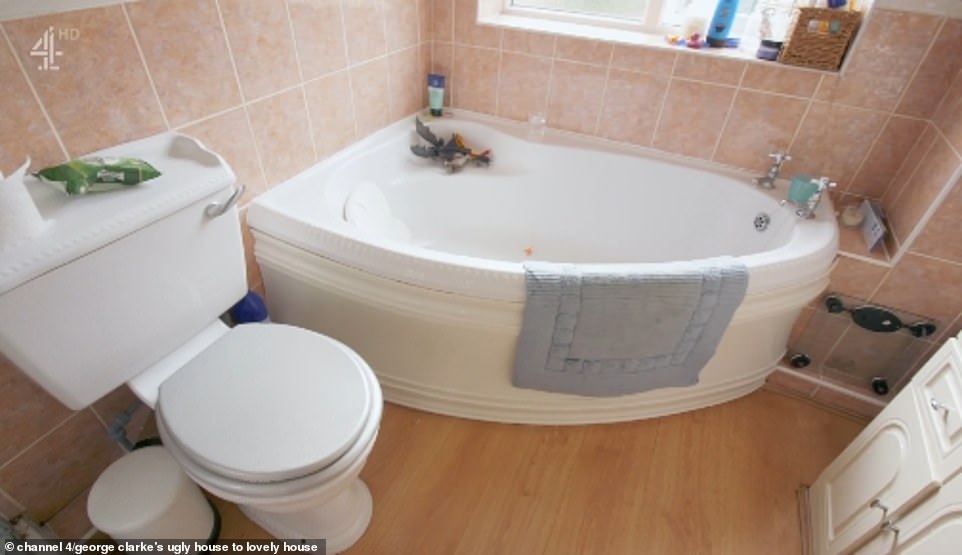 The original 1930s home was dated, as well as being impractical for a family of five, with just one pink bathroom in the property

Howard and Prue admitted they had concerns over the project, confessing: ‘When we started this, everything was geared around getting the back in before the baby. Then Covid hit.’

But Greg said he was trying to stay positive, admitting: ‘We’re okay. We’re doing well. I don’t know if it’s baby number three or we’ve had this going on but my mind has been on the house most of the time. Obviously I’m making sure Helen is okay, but we need to get in the house.’

He continued: ‘The budget is nervy. We have been quite clear from the start that we have a set amount of money because I don’t have any more money to give them after that.

‘It may be we don’t get every room finished. We don’t want to compromise on quality.’ 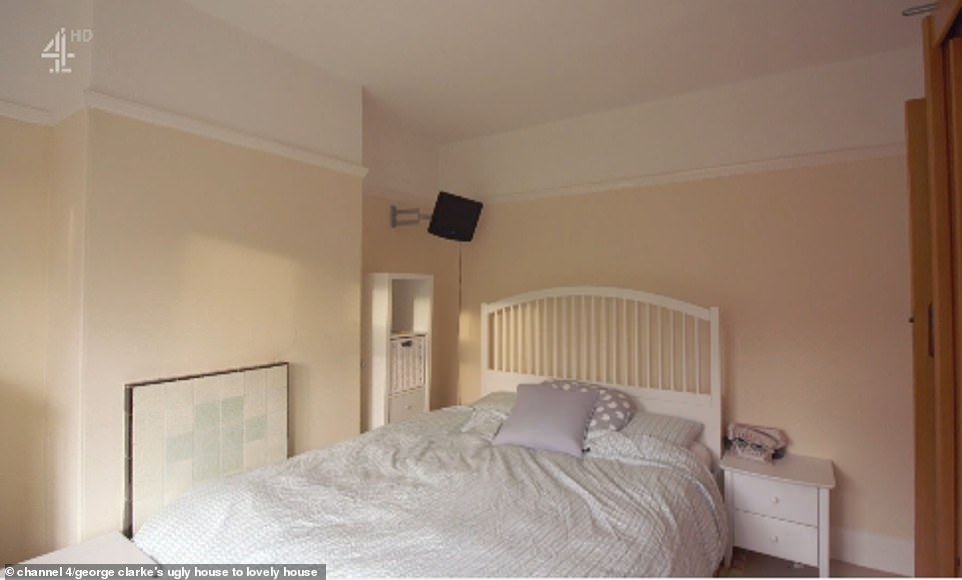 Meanwhile the property’s bedrooms lacked the grandeur and the decor that the couple were desperately seeking in their forever home (pictured, the master bedroom before the renovation)

The arrival of Greg and Helen’s third baby, Freddie, gave the builders new motivation to get the project finished, with Greg working night and day to get the interiors ready for his family.

But he continued to hold concerns over the budget after spending £6,500 on new windows.

He put his foot down upon the suggestion from the architects that they spend £8,000 on a plywood staircase. 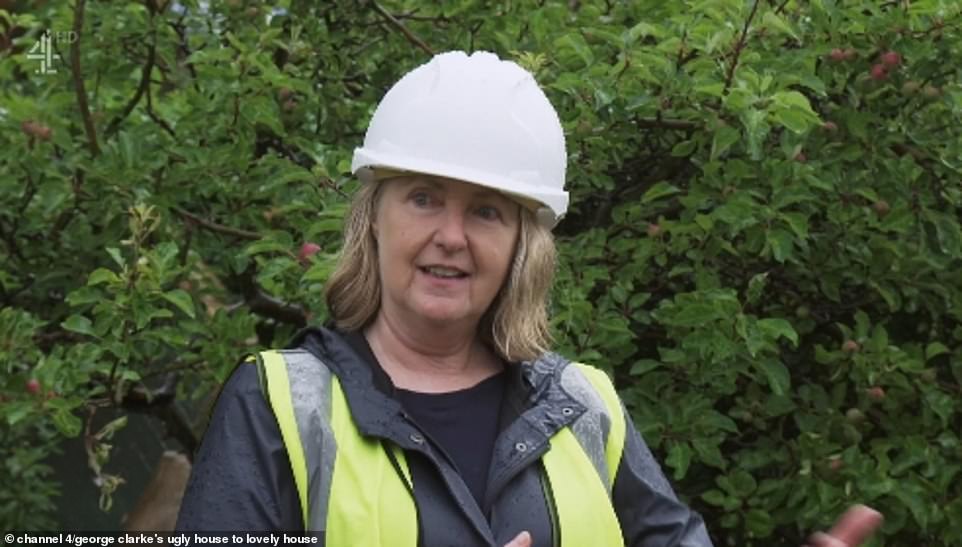 The architects had been hoping to spend £8,000 on a statement staircase within the home, but Greg urged them to cut costs for the sake of the budget

But Greg admitted even the cut-price version might be too expensive for the family, saying: ‘I don’t know where I could get the money from.’

Nearly six months after George’s first visit, he returned to the house to see the progress on the house with Greg confessing they had turned to credit cards in order to stretch their budget.

The father-of-three explained: ‘It is getting to the point where I am feeling less calm.’

He continued: ‘I don’t feel guilty but I…I feel quite a lot of weight. Like, how am I going to do this? I’ve already signed myself up to painting the whole house and the decorations and everything. I’ve got so many jobs. 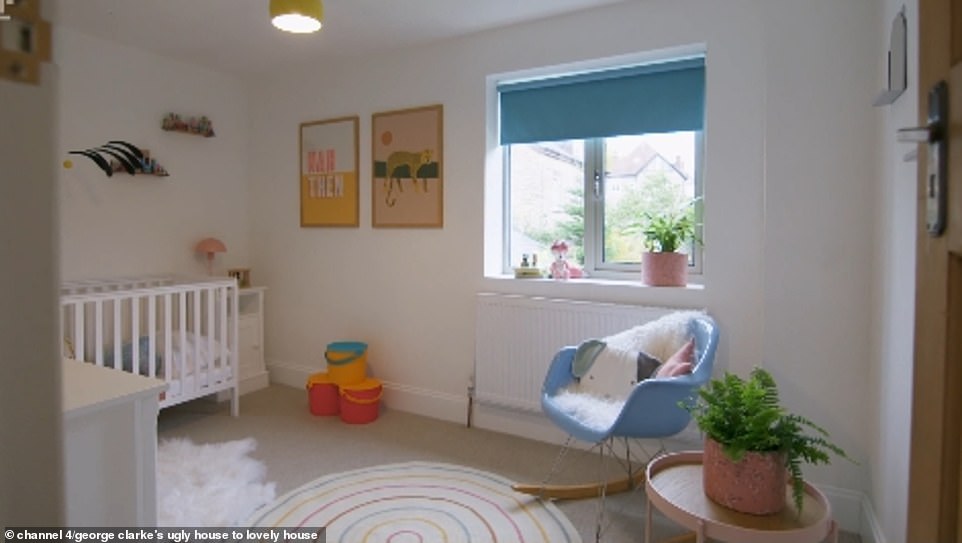 The couple were able to create a cosy and warm family home but admitted they had been forced to schrimp and save in order to stretch their budget by £25,000 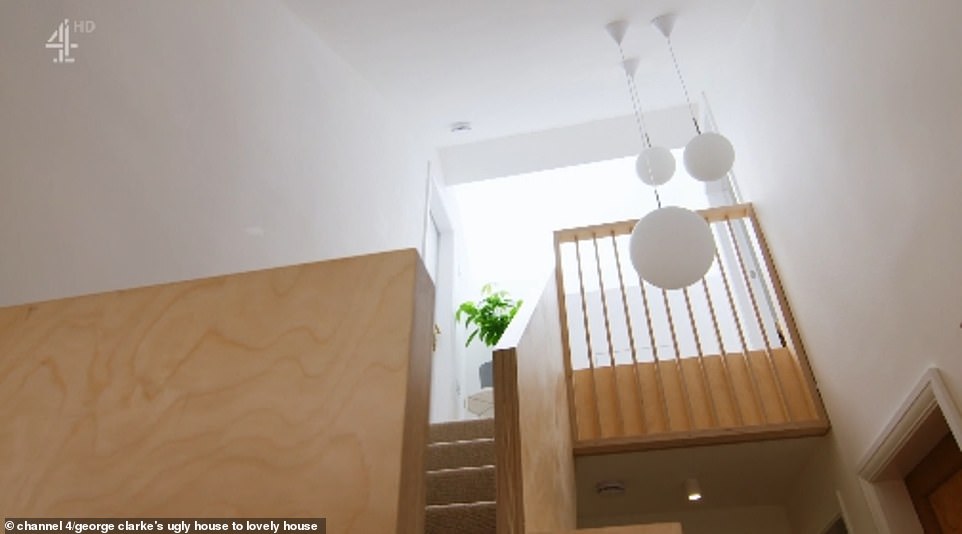 The stunning plywood staircase was originally set to cost the couple £8,000, but they managed to barter with the builders to cut the price in half

‘That’s the thing that’s now getting to me.’

As time went on, the renovation project remained three months behind schedule, with costs continuing to mount for the family and putting Greg under further pressure.

He said: ‘I’m back to work next week, so I’m running out of time now. It does feel like I’m nearly there but there is still a lot to do.’

But finally, three months behind schedule, George returned to see the couple’s home in all it’s glory. 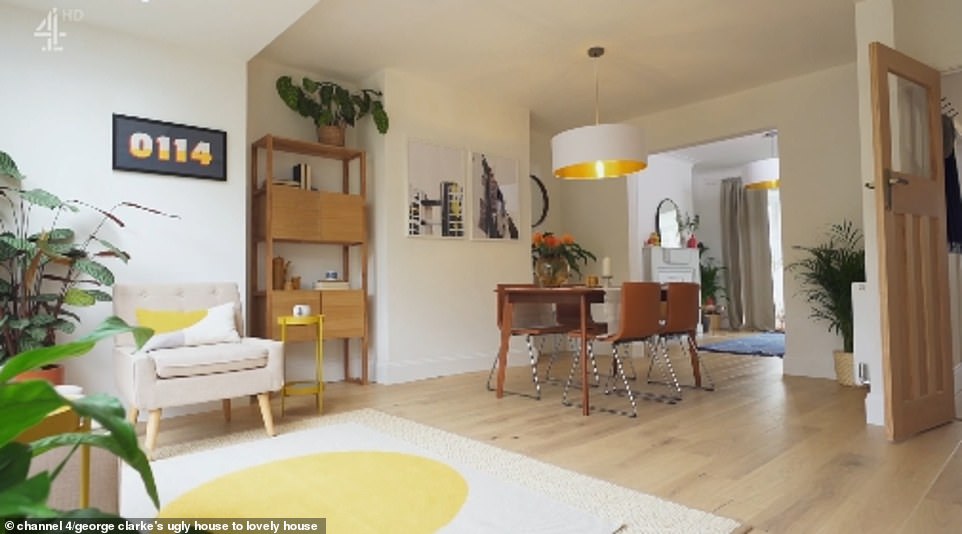 The couple unveiled a huge open plan living space which offered plenty of room for the children to play.

Meanwhile the extensions to the side and rear had given the couple a stunning kitchen at the heart of their home.

Yet they confessed they went ‘wildly over budget’, with Helen saying: ‘It’s been very crazy.’ 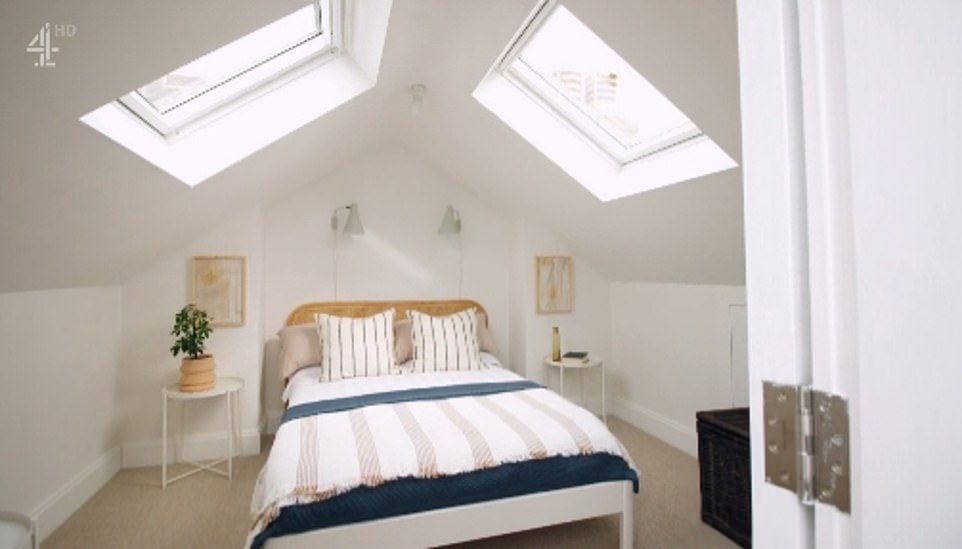 Meanwhile Helen and Greg also built into the loft of their home, creating a bright master bedroom with stunning sky lights to create a hideaway from the children

He went on to say they had taken out ‘credit cards and borrowed additional money from parents, just to get over the line.’

Viewers said they were stunned by the programme’s attitude towards the couple’s budgeting, with one saying: ‘For £145,000, I want a utility room, larder and downstairs toilet.’

Meanwhile another added: ‘I think it was really bad television – that young family being pressured into upping their budget, espiecially in this climate. George should of been encouraging to stick or stay below the budget – after all he’s not paying credit card interest!’