In a surprising move, Cinnabon is the latest chain to join the friend chicken sandwich wars.

The mall treat chain known for its warm, sticky cinnamon buns announced this week that it is launching a new line of Frozen Breakfast Creations that shoppers can buy at grocery stores.

While the launch includes more expected items like Caramel Pecan Ooey-Gooey Rolls, there’s also a new fried chicken sandwich that comes between a pair of cinnamon chip biscuits and is drizzled with cinnamon sauce. 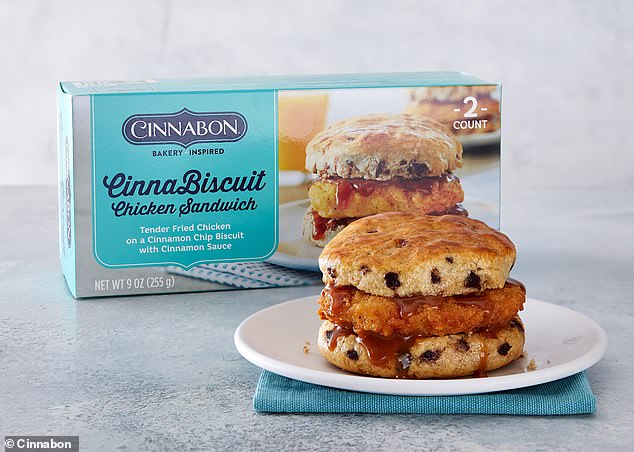 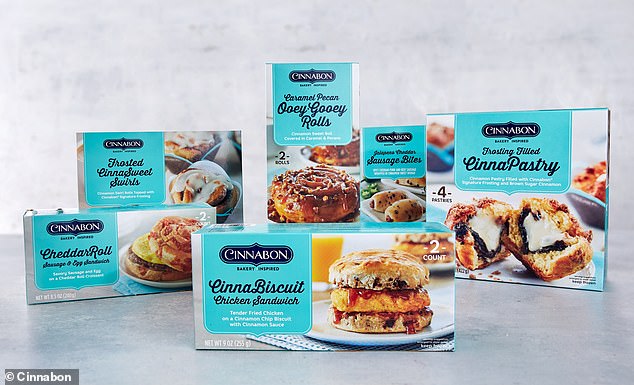 New! The chain is launching a new line of Frozen Breakfast Creations that shoppers can buy at grocery stores

Cinnabon’s is certainly the most unique of the bunch — and not just because it’s being marketed as a breakfast food .

The fried chicken is part of a savory-sweet combo thanks to the cinnamon biscuit ‘buns’ and drizzle.

On the more savory side are the Jalapeno Cheddar Sausage Bites —  cheddar pork and beef beef sausage wrapped in cinnamon dough — and the CheddarRoll Sausage & Egg Sandwich — sausage and egg on a cheddar roll croissant.

‘People are craving comfortable, convenient meals to enjoy while spending more time at home and our licensed products are a great solution for today’s environment,’ Dave Mikita, President of FOCUS Brands Global Channels, said in a press release. 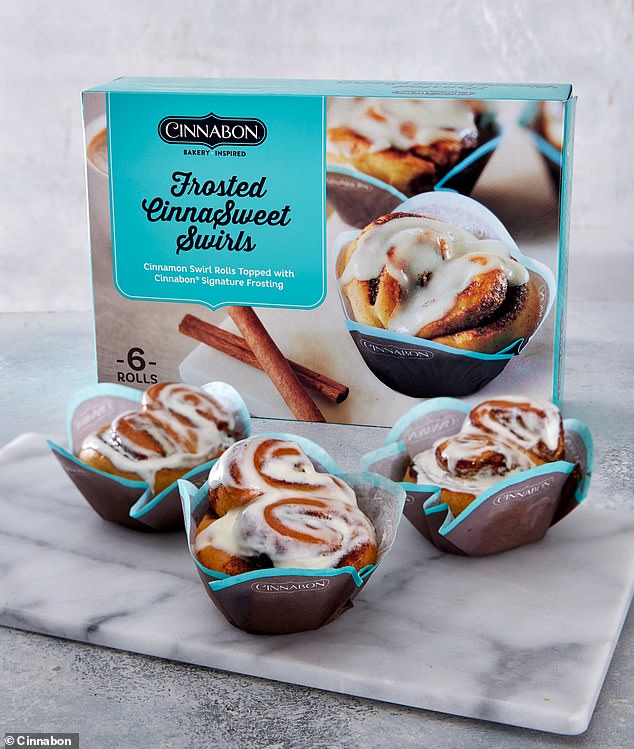 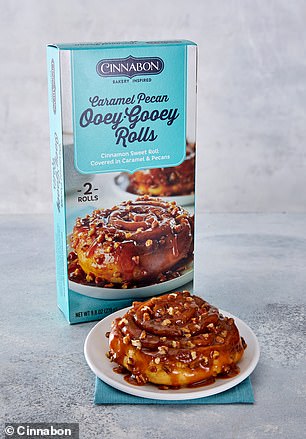 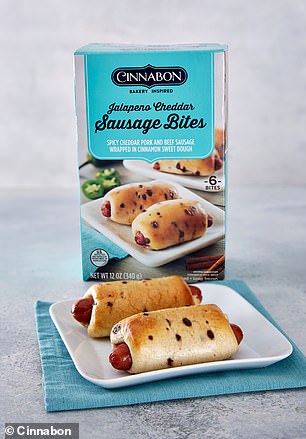 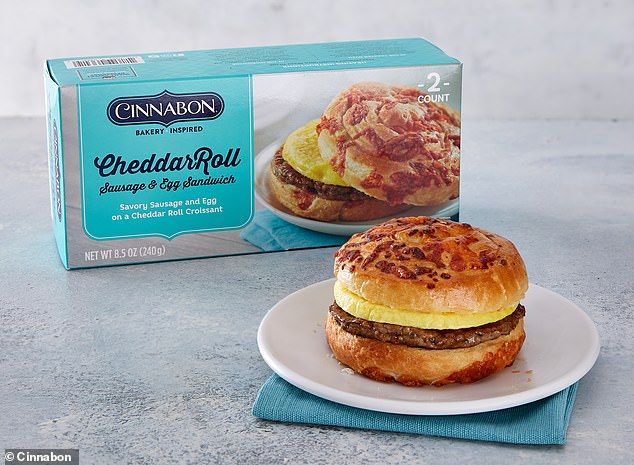 Tasty! On the more savory side is the CheddarRoll Sausage & Egg Sandwich: sausage and egg on a cheddar roll croissant.

‘Our mission is to give fans access to our brands in new, innovative ways and the Cinnabon Bakery-Inspired frozen breakfast creations line couldn’t have launched at a better time — it’s the perfect way for everyone from busy parents, to students and young professionals, to begin the day — not to mention they make great anytime treats!’

‘At Cinnabon we are always searching for ways to satisfy guest cravings and create more ways to access the flavors our guests enjoy,’ added Kristen Hartman, President, of Cinnabon.

‘Our world famous bakeries are the heart and soul of Cinnabon but grocery products, like our frozen breakfast creations, give Cinnabon fans the chance to bring a piece of the bakery experience into their homes and provide more delicious ways to enjoy the flavors they love.’

The products are launching first at Walmart and will eventually roll out to other grocery stores. 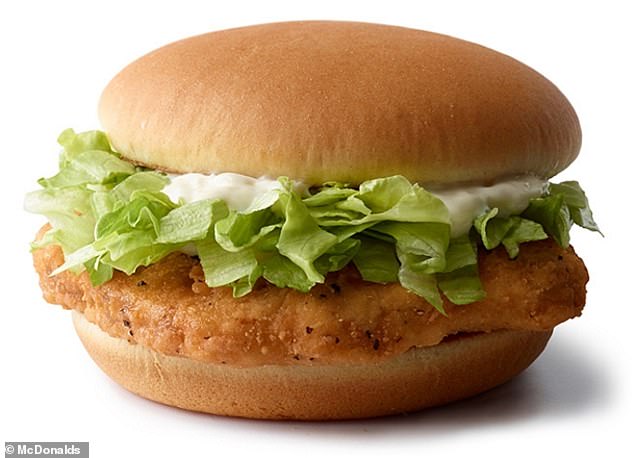 Next up? McDonald’s may finally have plans to join the fried chicken sandwich wars (pictured: the McChicken)

Meanwhile, McDonald’s may be next to jump into the chicken sandwich fray. In July,  Business Insider reported that Micky D’s is working on some new menu items for later this year — with heavy speculation that one will be a new fried chicken sandwich.

‘I do know that there is innovation that is planned for later this year that’s going to bring some menu items on,’ McDonald’s CEO Chris Kempczinski revealed on a McDonald’s earnings call while discussing plans for menu expansion.

While he didn’t specifically say there would be a new chicken sandwich, the item has been the most buzz-worthy fast food meal since the Popeyes launch.

Research firm Gordon Haskett, in particular, speculated in a report obtained by Business Insider that the sandwich is forthcoming.

‘We expect to see the new line of chicken sandwiches introduced in the fourth quarter of 2020,’ the report reads.

It seems that franchisees have been begging the chain to add a chicken sandwich to the menu that could compete with those introduced at other fast food chains. 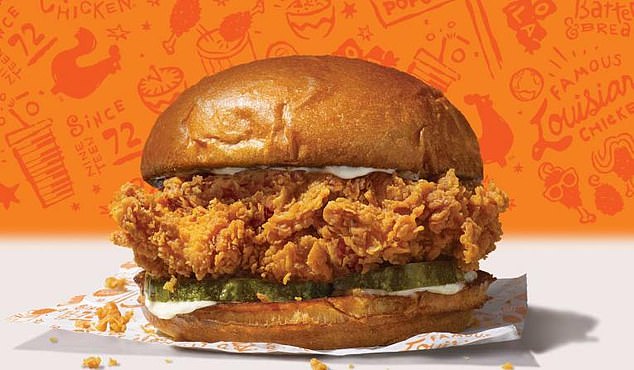 Several urged McDonald’s to ‘stay focused’ on developing one in a leaked email from January. 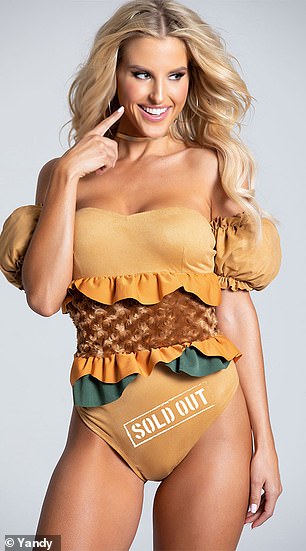 Must-have: The sandwich was such a phenomenon that it went on to inspire a Halloween costume from Yandy

This will mean even more competition for the Popeyes’ chicken sandwich, which debuted last August to much fanfare.

Diners went wild for the sandwich when it was first released, marking the first time in 45 years that the restaurant offered a sandwich.

In late August, an irate Popeyes customer climbed through a drive-thru window before brawling with three employees when he learned the sandwich was sold out.

And Craig Barr, of East Ridge, Tennessee filed a $5,000 lawsuit against the fast food chain alleging false advertising’ and ‘deceptive business practices’ by the company because he couldn’t get his hands on their famous chicken sandwich.

The sandwich was such a phenomenon that it went on to inspire a Halloween costume from Yandy.

It also kicked off a war with other fast food chains who all claimed that they had better chicken sandwiches.