A cash-strapped husband-to-be has turned to the generosity of strangers to help pay for the wedding of his dreams to the love of his life in Thailand.

He’s desperate to make their union official after the couple were forced to cancel their nuptials last year for unknown reasons.

‘Cancelling a wedding is a terrible thing in Thailand, as the date is fixed by culture. Because we cancelled, my partner lost a lot of “face”,’ Mr Hatton states on the fundraising page.

The wedding was rescheduled, but life’s obstacles have since gotten in the way of saving.

While Mr Hatton admitted he faces an uphill battle, he’s adamant the wedding will go ahead as planned.

‘We actually will have the money for the wedding no matter what but its very touch and go and I am very nervous as we had to cancel once,’ Mr Hatton told Daily Mail Australia.

‘Every bit does help significantly when you’re on bread line.’

With just over three months until the couple say ‘I do’, Mr Hatton has saved less than half of the $6,000 needed.

‘That’s kind of impossible with rent, food and bills. I will have to eat one meal a day in order to make things happen, basically.’

‘I’ve been doing everything I can from taking on extra jobs to participating in big poker matches to make it happen, but been digging myself a bit worse.’

‘We knew it would be tight and difficult, but a few things got in the way with general living that have jeopardised things a bit. I am getting only $525 a week from two jobs, Mr Hatton posted on the page.

‘We’re massively behind and need to get ahead. We can’t cancel the wedding a second time. It’s all or nothing. We’re in this to win this.’

Mr Hatton has organised a party fundraiser with live music, DJs and raffles at The Gollan Hotel in Lismore in May.

‘We hope some people can come to our party, hear some awesome music from local DJs and put some dough in the bucket toward our wedding,’ he told Daily Mail Australia.

‘The 21st century can be very difficult for couples trying to make a go in life. I earn little over $500 a week from two jobs and have to speculate with events and other ways of kickstarting an event.’ 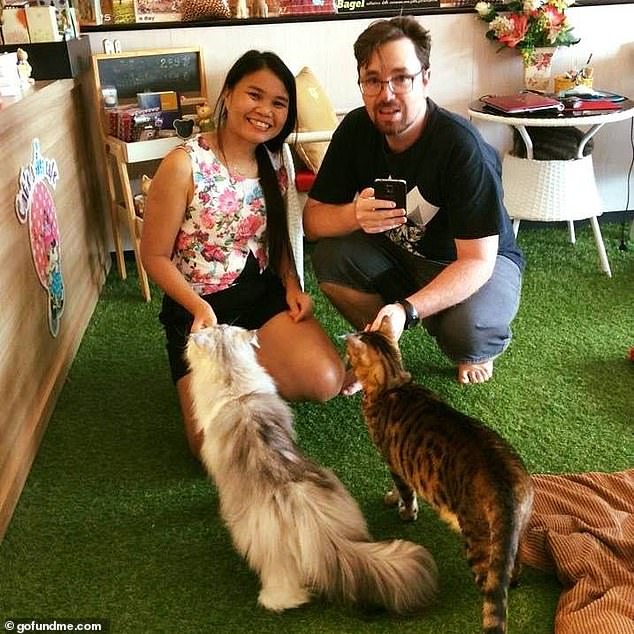 ‘Frankly we don’t NEED your donations, but every bit helps make life easier because we’re genuinely broke as hell in saving up and have trouble keeping up at times,’ he posted on a Facebook page dedicated to the event.

As well as their dream wedding, the financially-strapped couple will have to fork out almost $10,000 in visa costs for Nok to join her groom in Australia.

‘Your money will go towards the costs of our wedding, the basic costs for having a couple of weeks with my loved one and enable me to not starve when I get home,’ Mr Hatton wrote on the GoFundMe page.

‘It also may enable a start to saving the costs we need for Nok’s permanent partnership visa in Australia – which costs over $7000 and has an 18-month waiting period…but we’ll deal with that after the wedding.’ 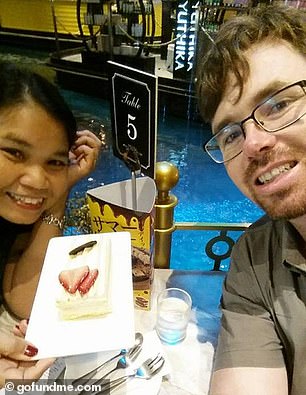 Of the four years they’ve been a couple, the Mr Hatton and Nok have lived together for less than half of that period, but talk every night via video link.

‘Some of you out there have followed our story and seen the kinds of things and risks we have gone through for our relationship. I chose this because I think she is totally worth it and we just want to be happy,’ Mr Hatton said.

‘We can’t cancel the wedding a second time. It’s all or nothing. We’re in this to win this,’ Kristian Hatton, pictured with his fiancee Nok said

‘What we’ve gone through for our relationship is real, and if all you have to contribute is critique and sabotage of our very real barriers, walk a mile in our shoes and then talk to us. This is not some internet spectacle for you to weigh up and laugh at, this is real s*** for real people,’ he stated.

‘It doesn’t make what we’re doing any less a cause toward a positive goal, and that’s what sites like GoFundMe are there for – legitimate causes,’ Mr Hatton said.

‘The story remains the same, we’re raising money for a beautiful thing four years in the making.’