Burger King has shocked fans by telling customers to ‘order from McDonald’s’ as the chain offered a dire warning for hospitality industry ahead of the UK’s second lockdown.

The UK branch of the US chain, which is worth an estimated £5.5bn, posted a heartfelt message on Twitter asking people to buy from  KFC, Leon, Taco Bell, Pizza Hut, Subway and Greggs as ‘thousands of jobs depend on it’.

The tweet has seen more than ten thousand replies, with many branding the store ‘classy’ while others instead suggested supporting small businesses and local independent restaurants rather than multinational chains. 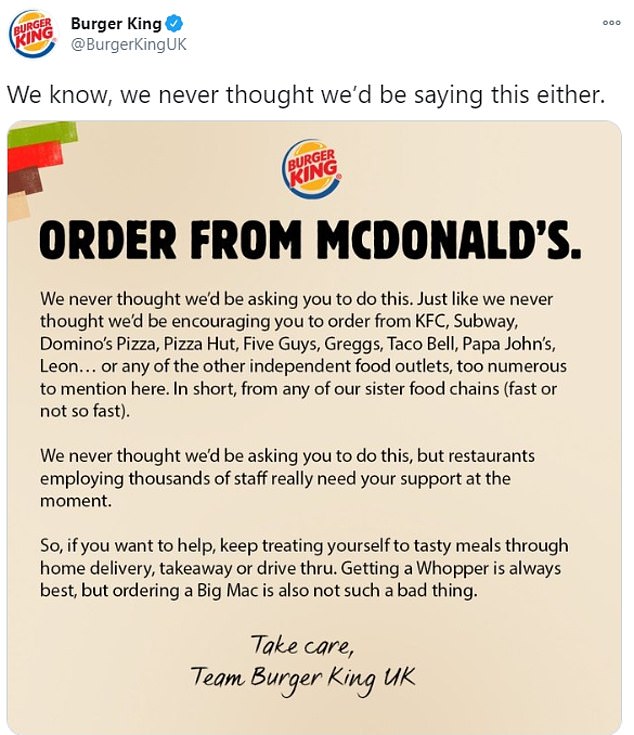 ‘We never thought we’d be asking you to do this.

‘Just like we never thought we’d be encouraging you to order from KFC, Subway, Domino’s Pizza, Pizza Hut, Five Guys, Greggs, Taco Bell, Papa John’s, Leon… or any of the other independent food outlets, too numerous to mention here.

‘In short, from any of our sister food chains (fast or not so fast).

‘We never thought we’d but the restaurants employing thousands of staff really need your support at the moment. 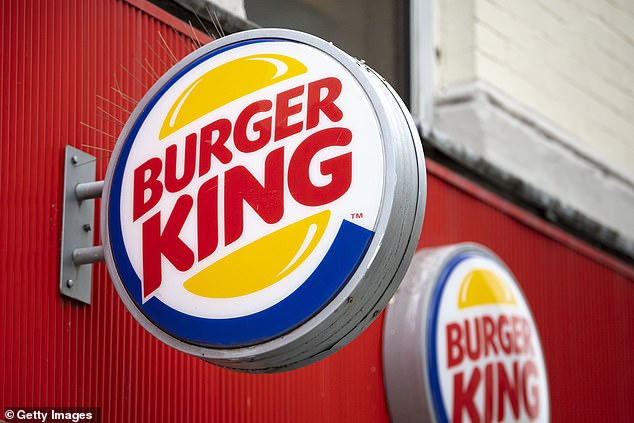 The chain, which is worth an estimated $5.5bn, posted a heartfelt message on Twitter asking people to buy from KFC, Pizza Hut, Subways and Greggs as ‘thousands of jobs depend on it’

‘So, if you want to help, keep treating yourself to tasty meals through home delivery, takeaway or drive thru.

‘Getting a Whopper is always best, but ordering a Big Mac is also not such a bad thing.

They followed up with a tweet urging customers to support other burger restaurants. 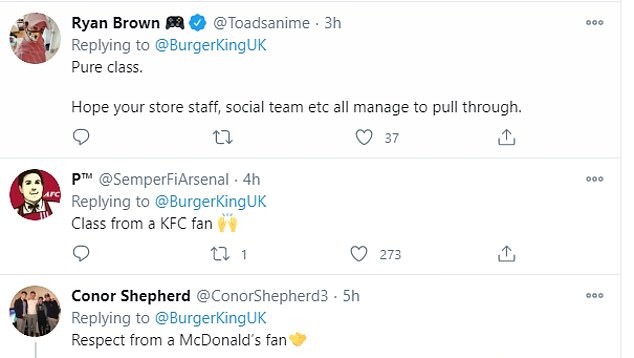 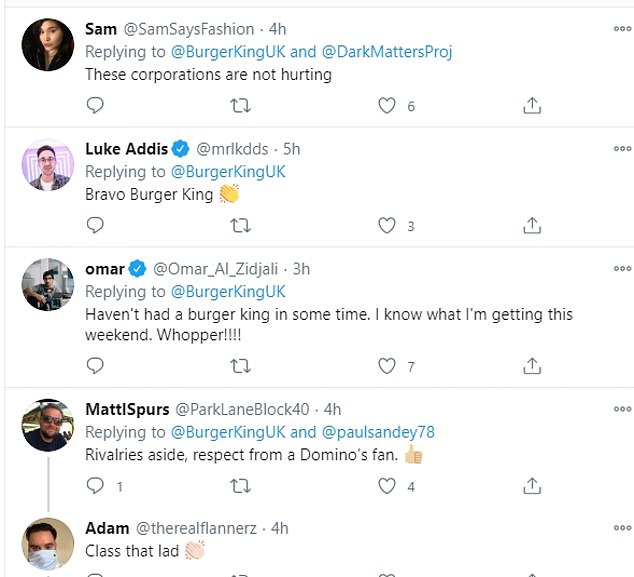 Twitter users had a mixed reaction to the tweet, with some enjoying the support while others pointed out small businesses suffer the most.

During the first lockdown in March, restaurants including McDonald’s and Burger King closed, and were allowed to reopen in July.

Under the new restrictions, which come into force at midnight on Thursday, hospitality venues are able to provide takeaway and delivery services, but won’t be able to deliver alcohol or have a sit-in service.

Twitter users had a mixed reaction to the tweet, with some praising the support for fellow business while others pointed out small companies that suffer the most.

‘Yeah the whole point of that is to support SMALL businesses. all those conglomerates are doing justttt fine,’ said one.

‘Thank you company for your incredibly heartfelt and sincere comment that isn’t totally an obvious ploy at increasing goodwill through an empty gesture by planting the seed that BK doesn’t completely suck,’ added another.

‘I’ve always liked Burger King and stuff like this makes me respect you and your brand even more! I wish more companies would be like you,’ a fourth commented.

‘Haven’t had a Burger King in some time. I know what I’m getting this weekend. Whopper!’ commented another.

WHAT ARE THE DIFFERENT CORONAVIRUS RESTRICTIONS ACROSS THE UK?

New lockdown restrictions announced for England on Saturday October 30 are the latest measures brought in for the UK.

Different rules are now in place in each of the four nations.

This is the picture in England, Wales, Scotland and Northern Ireland.

On Saturday, October 30 Prime Minister Boris Johnson announced new measures for the whole of England which are to come into force from Thursday.

Pubs, bars, restaurants and non-essential retail will close until December 2 and people will be told to stay at home unless they have a specific reason to leave, but schools, colleges and nurseries will remain open.

People will be allowed outside to exercise and socialise in public spaces outside with their household or one other person, but not indoors or in private gardens, and will be able to travel to work if they cannot work from home.

The whole of Wales is currently under a 17-day ‘firebreak’ lockdown which started on October 23 and will last until November 9.

People can only leave their homes for limited reasons and must work from home where possible.

Leisure, hospitality and tourism businesses are closed, along with community centres, libraries and recycling centres. Places of worship are shut other than for funerals or wedding ceremonies.

The majority of Scots will be placed into Level 3 of a new five-tier system from Monday, with the rest of the country in either Levels 1 or 2.

The central belt – including Edinburgh, Glasgow, Stirling and Falkirk – will be joined by Dundee and Ayrshire in Level 3.

Aberdeenshire, Aberdeen, Fife, the Borders, Dumfries and Galloway, Argyll and Bute, Perth and Kinross and Angus will be in Level 2.

Highland, Moray, Western Isles, Orkney and Shetland have been assessed as Level 1.

Levels 1, 2 and 3 are broadly comparable to tier system currently in place in England.

Despite ministers considering putting North and South Lanarkshire into Level 4 – equivalent to a full lockdown – First Minister Nicola Sturgeon said on Thursday, 29 October that no area will be placed into that highest tier at the moment.

She has told Scots not to travel to England unless it is for ‘essential purposes’.

Retail outlets remain open, along with gyms for individual training.

People have been told they should work from home unless unable to do so, and have been urged not to take unnecessary journeys.