A British university student originally from Brighton, England, who is studying at college in Georgia is sharing some of her funny experiences and the things she’s learned on TikTok video.

Alyssa Feary is one of about 7,000 students at Georgia College & State University in Milledgeville, Georgia, near where her dad lives, and her time in the US — and the deep south in particular — has been enlightening.

In a video that’s been watched half a million times, Alyssa shares some of her thoughts, including that southerners say ‘y’all’ too much and that Americans have a misconception that there is one single British accent. 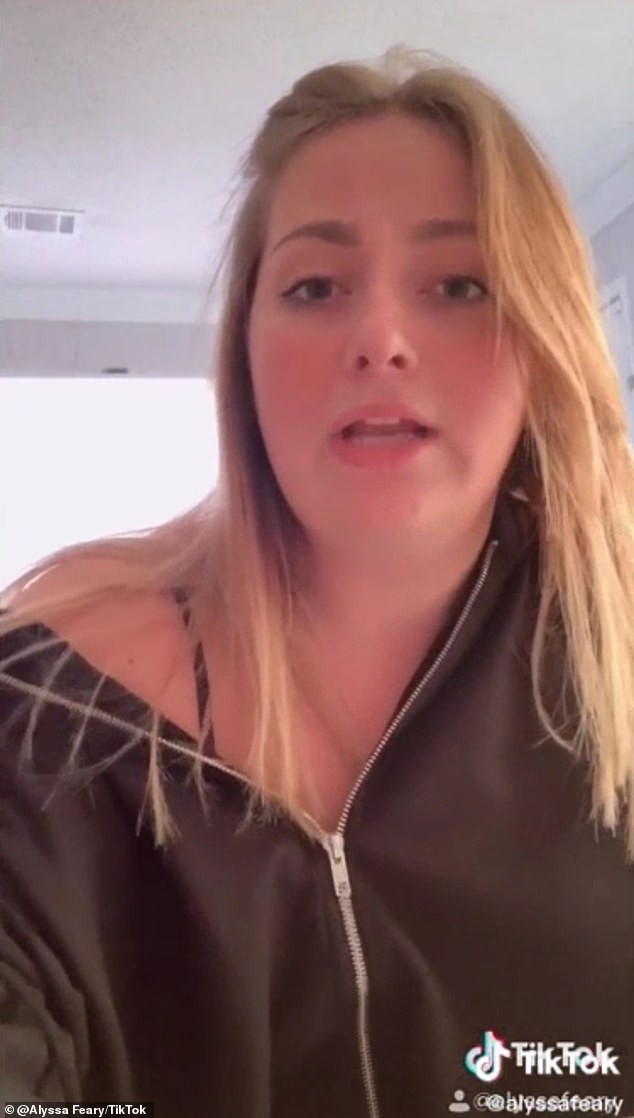 Fish out of water: Alyssa Feary is from Brighton, England and attends university in Georgia

‘So I go to a college in Georgia,’ she says in the video. ‘I’m English and I have a little list of things that I have learned while going to college here.’

‘Americans can’t comprehend that Britain is three different countries and there’s loads of different accents,’ she went on. ‘This is a British accent.’

While this may not be strictly true in bigger metropolitan areas like New York or Los Angeles, in a small place like Milledgeville — which has a population of about 18,700 and is 100 miles away from Atlanta — fewer people are likely to have had exposure to a lot of people from other countries.

Alyssa went on to say that the first question people ask her is, ‘Oh my god, why did you leave, why would you come here?

‘They don’t understand that people would want to go to other countries,’ she said.

Alyssa also admitted that her accent ‘gets me a lot of things,’ but expressed confusion over why. 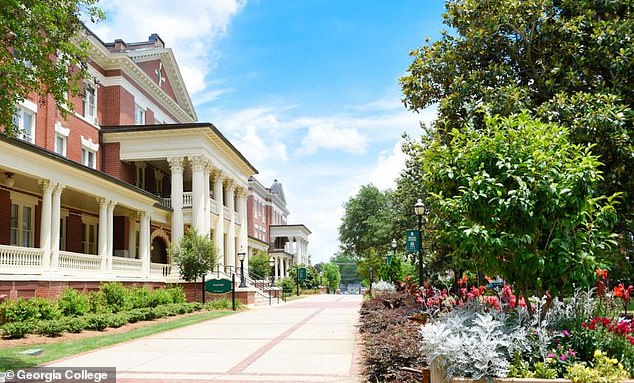 School: Alyssa is one of about 7,000 students at Georgia College & State University in Milledgeville, Georgia 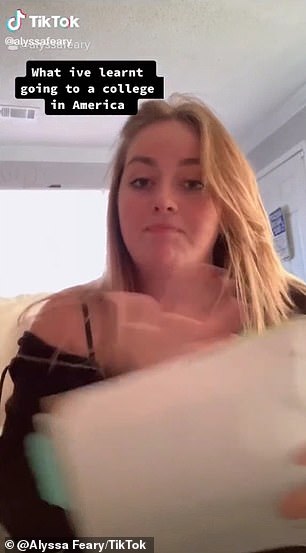 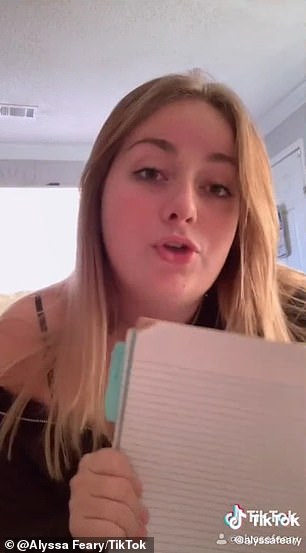 Revealed: She shared some of the things she has learned or noticed about living in the US

What’s more, she doesn’t quite understand why an American liberal arts education works the way it does.

‘You don’t actually start your college major until your junior year,’ she said. So even though she is a business major, because she is an underclassman, she is still taking an environmental science class.

‘They think of Europe as a whole place,’ she went on. ‘Like, “Oh I went to Europe this summer” — like it’s not many, many countries.’

Next on the list, she said, ‘In the south, the word “y’all” is used way too much,’ and ‘everyone goes to Florida for spring break, regardless of where you live.’

She has also found it tricky to get a drink at a restaurant.

‘I have to order in an American accent,’ she said. ‘When I want a water, I have to get a “water [American accent]” because no one understands what I want.’

Finally, she said: ‘They don’t know what a full stop is.’

While the punctuation mark at the end of a sentence is called a ‘full stop’ in the UK, Americans call it a ‘period.’ 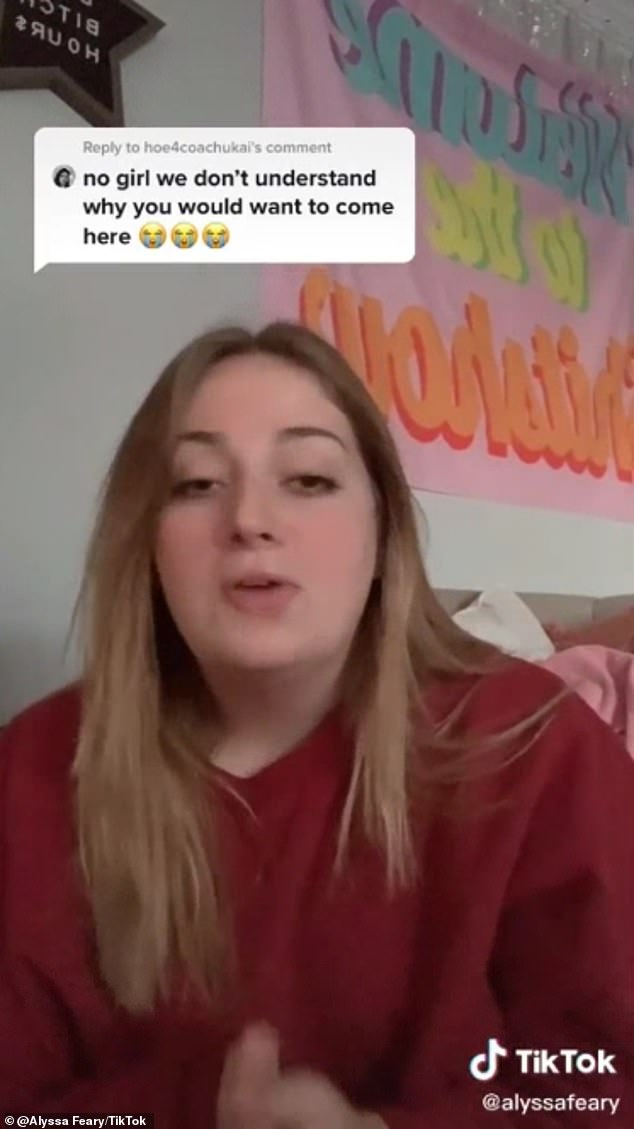 Q&A: After Alyssa’s video racked up views, she posted a follow-up to answer some viewer questions

After Alyssa’s video racked up views, she posted a follow-up to answer some viewer questions.

‘So this is a sort of part two to my last video but people seem to be asking questions. Why you care, I don’t know,’ she said.

‘So I obviously go to college in Georgia, it’s cause I moved in with my dad after I graduated high school last summer and so I’ve lived here for like a year and a half.

‘He’s lived here [for] like loads and loads of years so I would visit all the time and I actually really liked it, especially from where I lived in England.’

What’s more, she said, she didn’t mean to offend anyone.

‘That whole video was just jokes. I love being here, I love my school. My three roommates are my best friends, they’re the best people I’ve ever met,’ she went on. 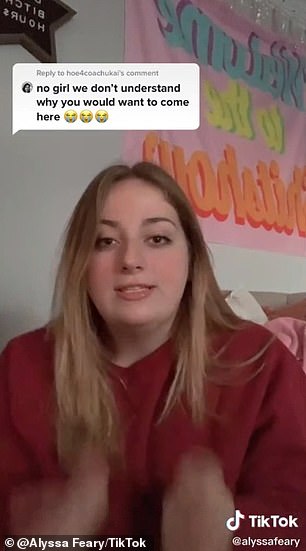 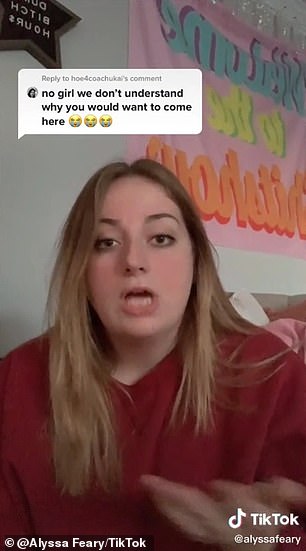 ‘That whole video was just jokes. I love being here, I love my school. My three roommates are my best friends, they’re the best people I’ve ever met,’ she said

‘And so people were saying they found it funny when I said, “water” so I guess when I would order ranch it would be “ranch [American accent],” especially when I go through drive-thrus,’ she went on.

‘I really have to put my American accent on because they have no idea what I’m saying.’

She also attempted to explained to confused American viewers what she meant about Great Britain being three countries.

Great Britain is an island made up of England, Scotland, and Wales — three different countries. Together with Northern Ireland, they make up the United Kingdom.