A British Airways flight attendant has opened up about the devastating impact the pandemic has had on her job, claiming there’s ‘tension in the air’ and a sombre atmosphere due to most people flying for ‘compassionate reasons’.

The senior cabin crew member for BA, identified only as Alex, spoke to The Points Guys about the changes to long haul flying since the outbreak of coronavirus.

While before the pandemic, Alex – who flies out of London Heathrow – would wake up ‘excited’ ahead of her shift, she now dreads it because most people are travelling for ‘compassionate reasons’ rather than going on a fun holiday.

She said the ‘exciting’ atmosphere of flying has disappeared, not helped by the fact  passengers are required to wear face masks and have little-to-no meal service. 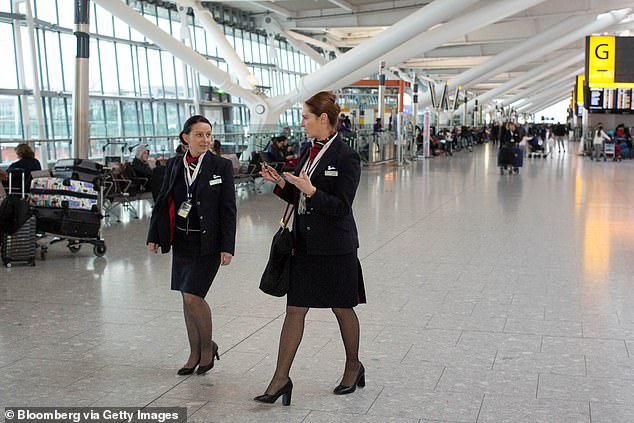 A British Airways flight attendant has revealed what it’s like to fly during the pandemic, revealing there’s ‘tension in the air’ and they no longer serve hot food or alcohol on-board (stock image)

‘I know that the ones that are travelling are doing so for compassionate reasons because someone has either died or is dying,’ Alex said.

‘I have to put an invisible shield up and listen to what people are going through — as crew, we always do that anyway.

‘But the difference today is that it’s not just one or two passengers who are travelling for compassionate reasons — it’s most of them.’

Alex added that the first thing she notices while travelling is how deserted the car park is, while the terminal is also ‘completely empty’.

On board the shuttle bus from the car park to the terminal, she told how ‘there’s an eerie silence and the occasional acknowledgement by way of a raised eyebrow’. 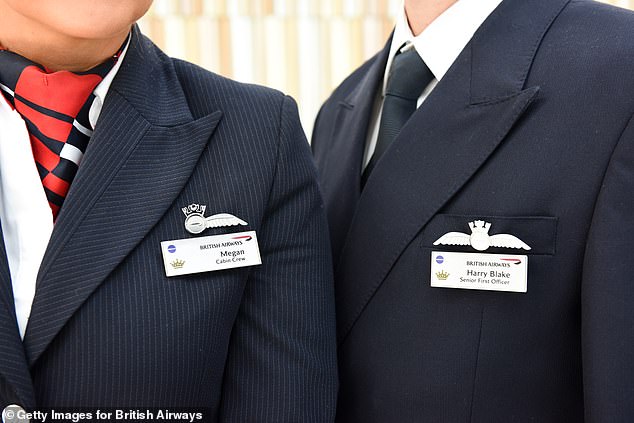 Alex, who flies out of London Heathrow, added the first thing she notices while travelling is how deserted the car park is, while once in the terminal it’s pretty much ‘completely empty’ (stock image)

She added that fellow crew members don’t greet each other with hugs and kisses any more or ask where each other is travelling too, adding that everyone just ‘stays quiet’.

The crew member said the ‘life and soul of the place’ has disappeared, and the limited number of staff are ‘sat alone reading and trying to stay away from each other’.

Alex added she can ‘feel the tension’ in the air because some passengers wear full hazmat suits, with many worried they aren’t protected enough.

During the flight, passengers have to stay in their seats, and can only take off their seatbelt to use the bathroom. 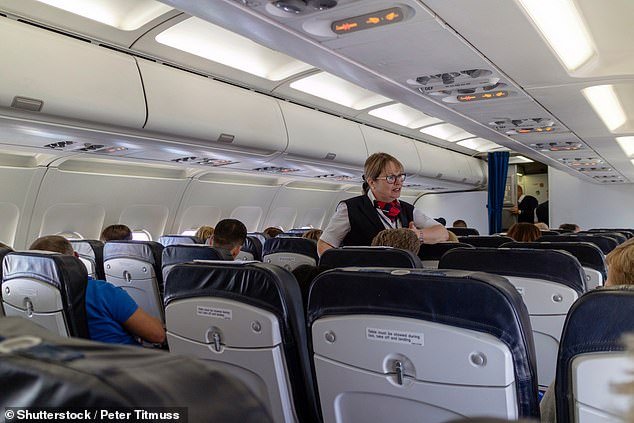 An image from October 2019 shows cabin crew chatting with customers, but small talk and interaction is now largely a thing of the past

She explained the biggest difference now with long haul flights is that BA customers are no longer served alcohol; instead they’re given hot drinks in paper cups and soft drinks with no ice.

Meals are now like ‘a child’s packed lunch’, with passengers handed a bottle of water, a sandwich and some kind of snack, while first class customers also get tapas, Alex added.

Elsewhere there are no longer are duty free sales on board – but premium customers do receive an amenity kit.

Both passengers and staff need to maintain social distancing, which means ‘nobody wants to talk anymore’ and people are mostly ‘sleeping or watching films’.