An extreme hoarder who began collecting junk 25 years ago after his mother died admitted his home became so cluttered he wasn’t able to use the kitchen or bathroom for four years.

Paul, 72, from Crosby, Merseyside, appeared on Channel 5’s Hoarders last night, and viewers were disgusted when clearing expert George discovered a mummified rat among the mess.

Every room in his home was filled to the brim with piles of random items, some of which were around 6ft tall, and he was forced to eat out and shower elsewhere because he couldn’t reach his own amenities.

Concerned by how much longer the house would be able to withstand the weight and bogged down by the ‘mental and physical pressure’ the hoarding was putting on him, Paul decided he wanted to clear out his home and sell it to help fund his retirement.

But after filling eight skips and chucking away 24 tonnes worth of rubbish, Paul discovers the damage his habit caused to his house caused its value decreased by £30,000. 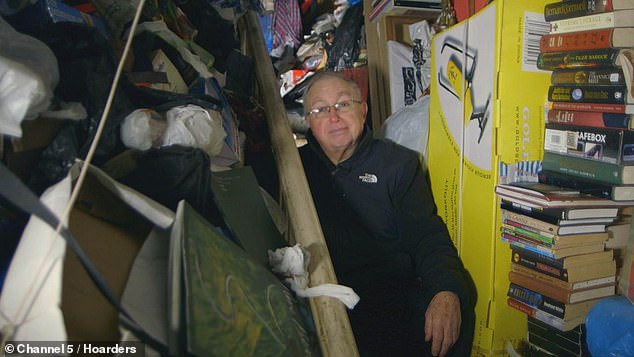 Paul, 72, (pictured sitting on his stairs surrounded by his hoard-filled hallway) decided to clear out his cluttered home in Crosby, Merseyside, to fund his retirement after collecting items for 25 years following the death of his mother in 1995 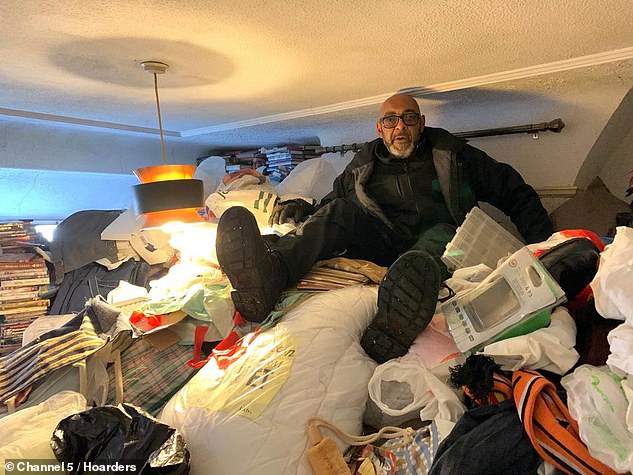 Hoard clearing expert George (pictured) was shocked to see the enormous piles of items Paul had collected. He had amassed so much the mounds were around six foot tall and almost reached the ceiling

Paul told how his hoarding started with books and clothes and soon escalated into antiques, Roman artefacts and weaponry.

A few years ago he admitted his collecting had spiralled so badly out of control he was forced to leave his home and move in with his friend Simon – whose home he has also begun to clutter.

Paul’s house, located in a middle-class suburb perfect for families and minutes from the beach, was bursting at the seams, with windows panes cracking under the pressure.

He said as he got older he ‘became aware he is mortal’ and hoped clearing out the clutter and selling his home would be his ticket to a happy retirement. 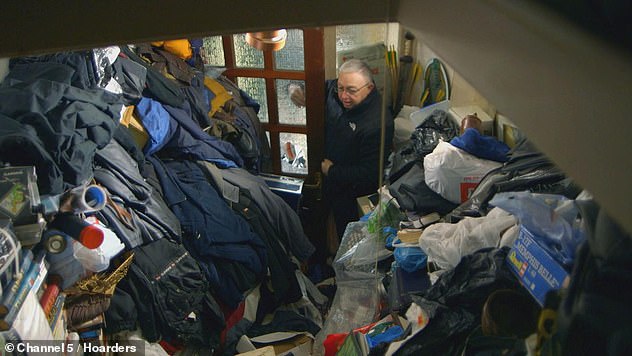 After filling every room in the house, Paul’s collecting soon began to gather in the hallway and before long he had cut off connection to his kitchen – forcing him to eat out every day 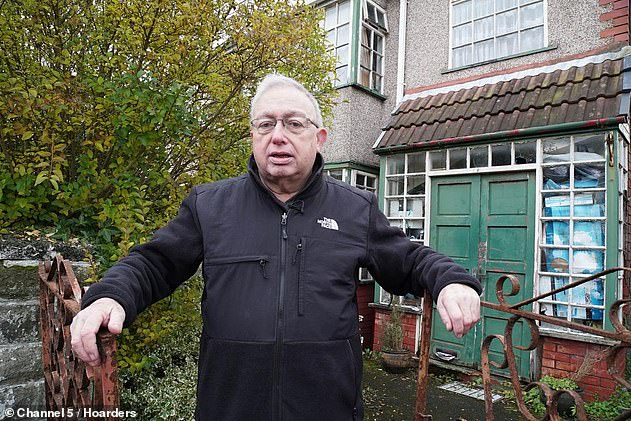 Paul was concerned that his house, in a desirable middle-class area of Merseyside, may not withstand the weight of the hoarding for much longer and decided to make a change

‘When it’s clear, I hope to sell this off, move in full-time with Simon, and go on a few holidays. I haven’t been on a holiday for years,’ Paul said.

‘This is my life over the last 25 years, encapsulated in a ridiculous obsession. I don’t know why I ever thought this lot would become an asset to the house.’

At its peak, Paul’s hoarding took over the whole property and he was left with no other option but to eat out every day when access to his kitchen was cut off.

He would also shower in a cafe in town instead of at home because his bathroom was buried in junk. 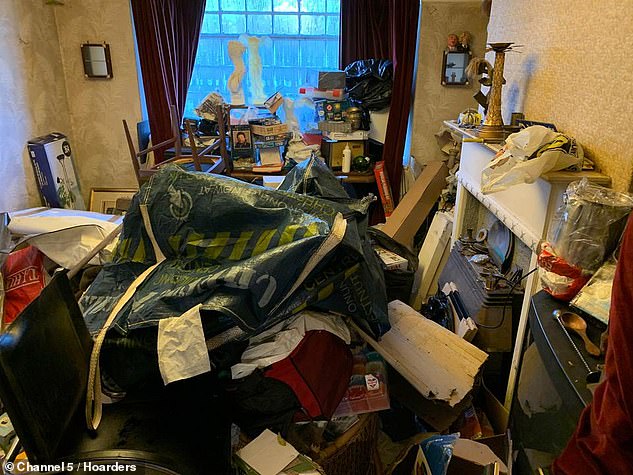 The hoarding got so out of hand Paul was forced to move out of his home and live with his friend Simon, who had never visited his cluttered house before the show 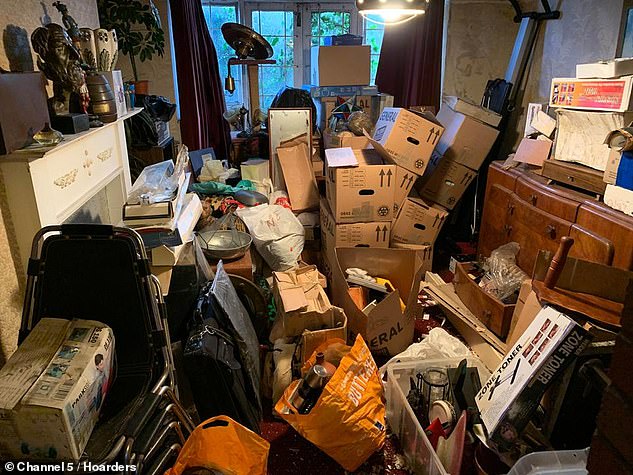 Once cleared, Paul planned to sell the property, which his mother bought for £23,000 – 35 years ago, move in with Simon full time and spend the money on a holiday

Paul’s mother bought the house 35 years ago for £23,000, after his father died, and maintained a tidy home.

A hoarding disorder is where someone acquires an excessive number of items and stores them in a chaotic manner, usually resulting in unmanageable amounts of clutter. The items can be of little or no monetary value.

Hoarding is considered a significant problem if:

But a few years after she died in 1995, Paul began collecting items ‘like his mother used to have’ – and it soon overwhelmed him.

Hoard clearing specialist George struggled to open the front door to assess how much work it would take to clear the house and had to use a camera to view some inaccessible areas of the house.

Over eight days, a team of five people were tasked with emptying Paul’s home, which George described as ‘like no other hoard we’ve done before’.

Despite George’s recommendations, the hoarder refused to throw away books covered in rat droppings, which were piled up in his car and taken to his friend Simon’s house instead.

In order to clear out the kitchen, George and his team donned protective suits and wore masks to avoid the effects of the rat infestation.

The pests had run riot through Paul’s home, helping themselves to food in his closed off kitchen and leaving droppings everywhere.

Looking at the damage, George said: ‘Nothing is going in our van from here. 95 per cent of this is contaminated.’

Despite the damning conclusion, Paul still requested George pass him the shirts hung up in the kitchen and filled his car with infested items.

While he struggled to part ways with several books and precious items, rummaging through every bag the team collected before they were thrown away, Paul eventually filled eight skips and chucked away 24 tonnes worth of rubbish. 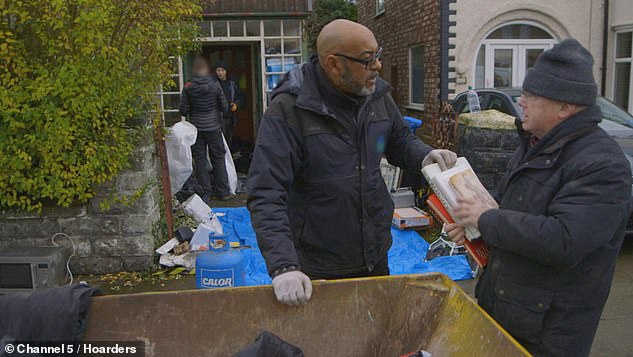 But it wasn’t all plain-sailing; Paul struggled to part with several items and, despite George advising him to throw certain items away which were infested with rat droppings, he kept them and put them in his car 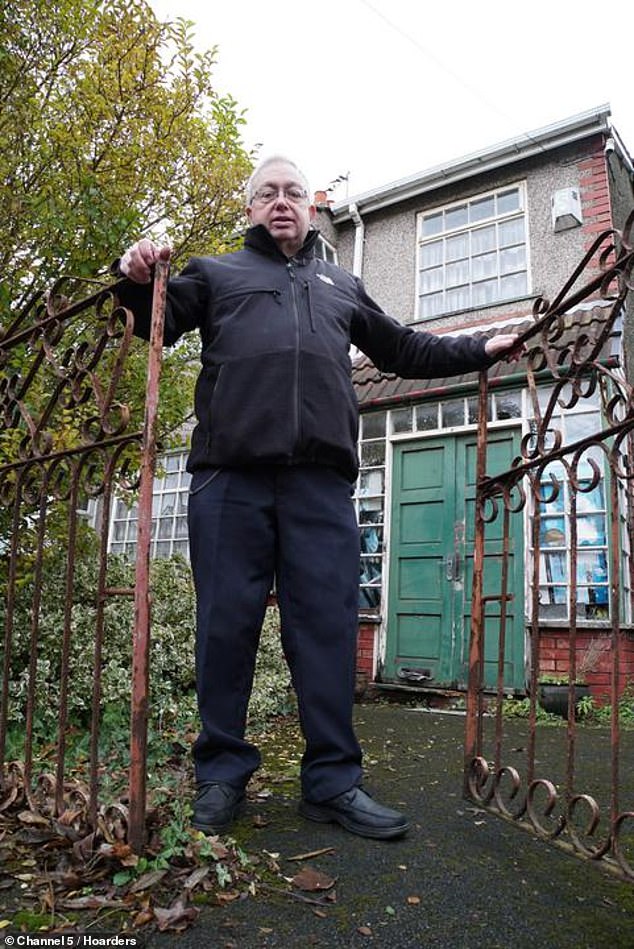 Even thought it suffered structural damage from the weight, Paul was able to sell his house for £141,000, despite being told by an estate agent he would only get around £110,000

He was also able to make £1,500 by selling off old antique items and Roman artefacts.

Once cleared, it was revealed the weight of the six-foot high contents inside had caused the floors to drop as much as eight inches, while the lack of ventilation left the walls extremely damaged.

Originally estimated to be worth £145,000 by estate agent Helen, once the structural damage came to light the estimation dropped by £30,000.

In spite of the damage, and receiving cash offers as low as £42,000, Paul was able to sell his home for £141,000 – leaving him with a large chunk of money to go towards his retirement.