An Alabama couple waited for the moment the bride walked down the aisle for the groom to see her for the first time on their wedding day, but the bride still had a ‘first look’ photoshoot — with their dog.

Kristen Dupree, 24, tied the knot with Duncan Dupree, 25, in Spanish Fort on November 8, but before Duncan watched Kristen make her big entrance, the bride had a special moment with their two-year-old black American Kennel Club Labrador retriever, Zeke.

Photographer Perri Farlow of Farlow Photography captured the moment Zeke turned around and saw Kristen in her white dress — and while he may not have registered her bridal look, the pup was no less thrilled to see her. 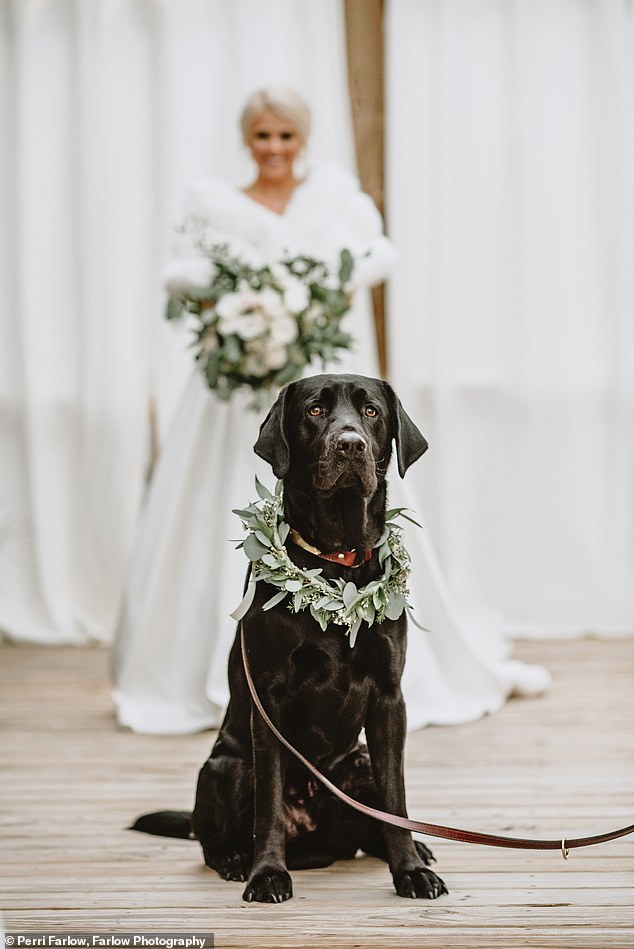 Puppy love: Kristen Dupree, 24, has a ‘first look’ photoshoot with her dog Zeke on her wedding day 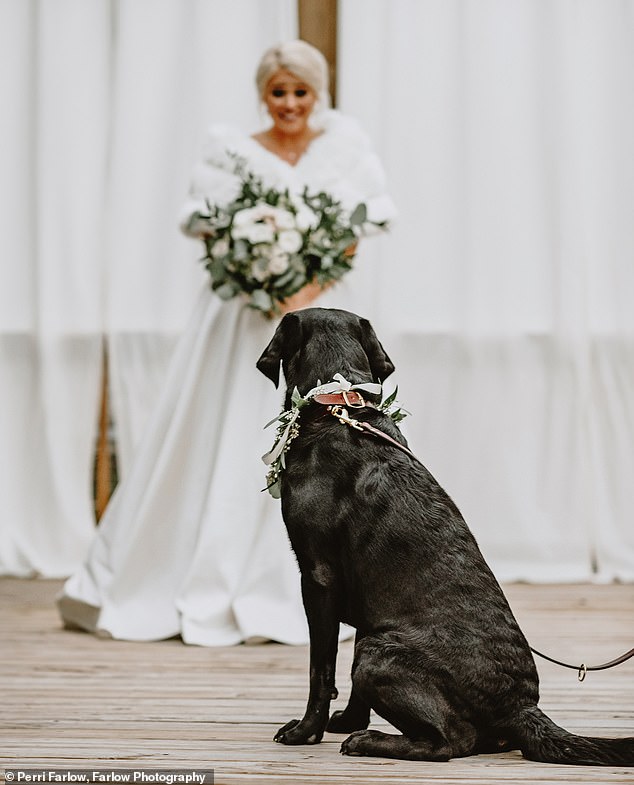 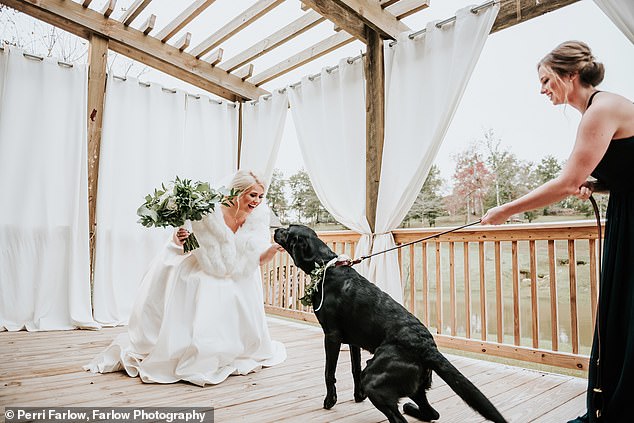 Look of love: The groom waited to see her when she walked down the aisle, but while she was waiting, she had a visit from their ‘best’ friend’ Zeke

‘Duncan decided pretty early on that he wanted to see me for the first time walking down the aisle with my father, rather than a “first look.” In passing, we joked about me doing one with Zeke,’ Kristen told Today.

But the joke turned into the real thing on the big day, when Kristen was feeling a bit nervous before the ceremony.

Zeke was already on site, so Kristen’s matron of honor went to get him to comfort the bride.

They then had the dog — who Kristen calls the couple’s ‘best friend’ — sit facing away while Kristen came up behind him. 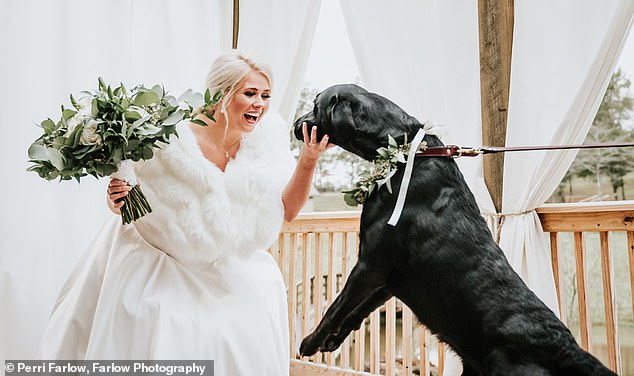 Party animal: The two-year-old black American Kennel Club Labrador retriever stuck around for the reception and even came out for a dance 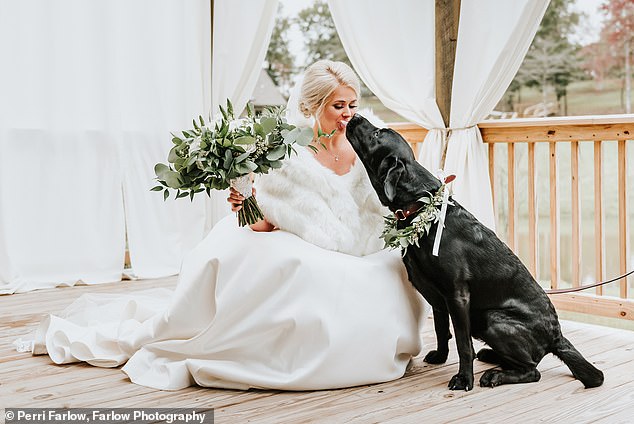 ‘It truly was a special moment for me. In the middle of a busy day of hair, makeup, setting up and pictures, it was nice to just love on my dog,’ Lauren said of the first look

When Zeke turned around, he dashed toward the bride, and the pair cuddled for a few photos.

‘It truly was a special moment for me. In the middle of a busy day of hair, makeup, setting up and pictures, it was nice to just love on my dog,’ Lauren said.

Zeke stayed at the venue for the rest of the event, and hung out in the groom’s suite and slept during the reception.

‘Duncan’s groomsmen kept bringing him rolls and green beans to munch on. He even made an appearance on the dance floor at the end of the night,’ the bride added. 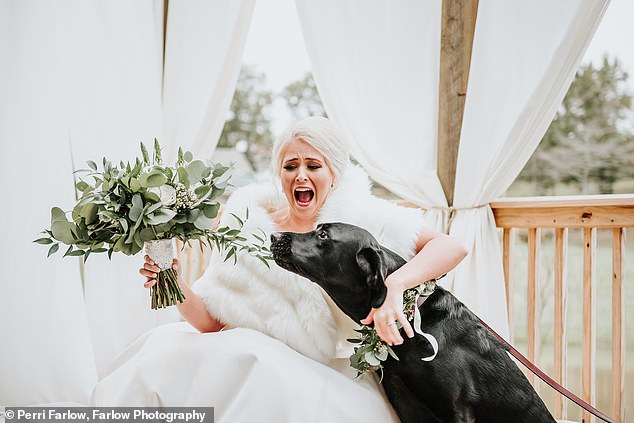 ‘Anyone that knows us knows how much we love Zeke. He comes everywhere with us,’ she added 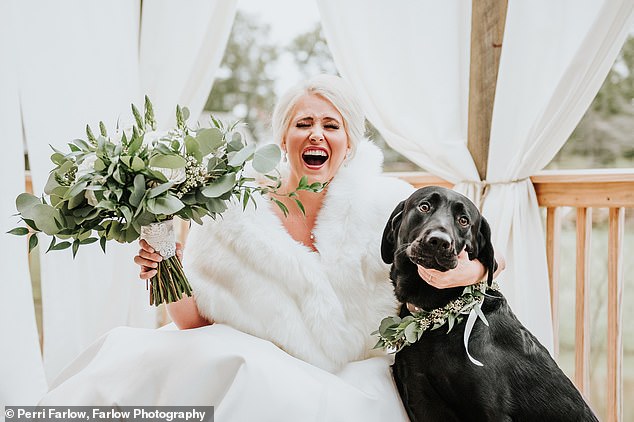 Famous: Since the images were posted on the Farlow Photography Facebook page on November 21, they’ve gone viral

The couple brought Zeke home during Lauren’s last semester at the University of Alabama, when Duncan was away working  as a landscape foreman and Lauren needed some company,

‘Anyone that knows us knows how much we love Zeke. He comes everywhere with us. Family beach trips, hunting camp weekends, boat days, we bring him everywhere,’ she said.

‘He is one of the sweetest dogs you’ll ever meet, and he makes every adventure better!’

Since the images were posted on the Farlow Photography Facebook page on November 21, they’ve gone viral, earning 19,000 likes and 47,000 shares.