A 30-year-old man is being called a ‘jerk,’ a ‘snob,’ and just ‘gross’ for shaming his girlfriend for ordering a side of macaroni and cheese with her meal at a high-end restaurant.

The girlfriend, a 22-year-old Redditor, said that she recently went out to eat at ‘a pretty nice restaurant’ with her older boyfriend and his friends, and happily ordered a truffle oil mac ‘n cheese as her side dish for a grilled chicken entree.

But while she was satisfied with the meal, her boyfriend said she ’embarrassed’ him, calling the man ‘n cheese ‘little kid food’ and her preferences ‘immature,’ chiding her to ‘develop some better tastes’ for the future. 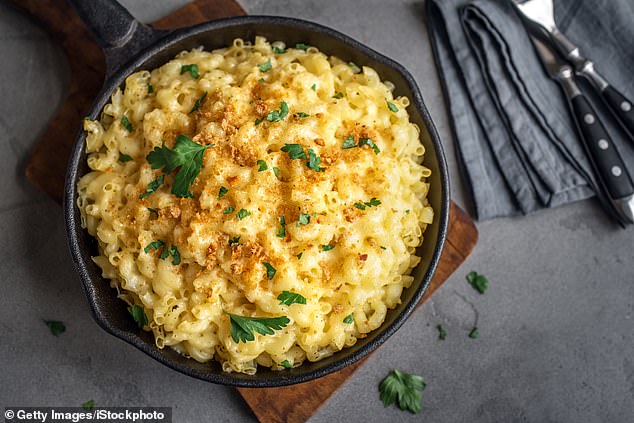 Yum! A 30-year-old man is being called a ‘jerk’ and a ‘snob,’ for shaming his girlfriend for ordering a side of macaroni and cheese with her meal at a high-end restaurant (stock image)

The girlfriend, who posted under the username HighBrowMacAndCheese, is eight years younger than her boyfriend — and he seems to lord the age difference over her.

‘I went to a pretty nice restaurant with my boyfriend and his friends yesterday,’ she began her post. ‘They live out of town and I haven’t met all of them before. It was us and four other people, all couples. My bf has known them since he was a teenager.’

She was, of course, the youngest person there, and says her boyfriend and his friends ‘all have nice full time jobs and went to private school.’

When the waiter came, she ordered an entree of grilled chicken that came with a choice of two sides. She picked potato wedges and the mac ‘n cheese — which she clarified ‘wasn’t like a bowl of Kraft, it was on the adult menu and was made with truffle oil and jalapeños.’

She also got lemonade instead of wine like the others, noting that she just doesn’t like alcohol.

‘My boyfriend said I embarrassed him by getting a “little kid” food,’ she said. 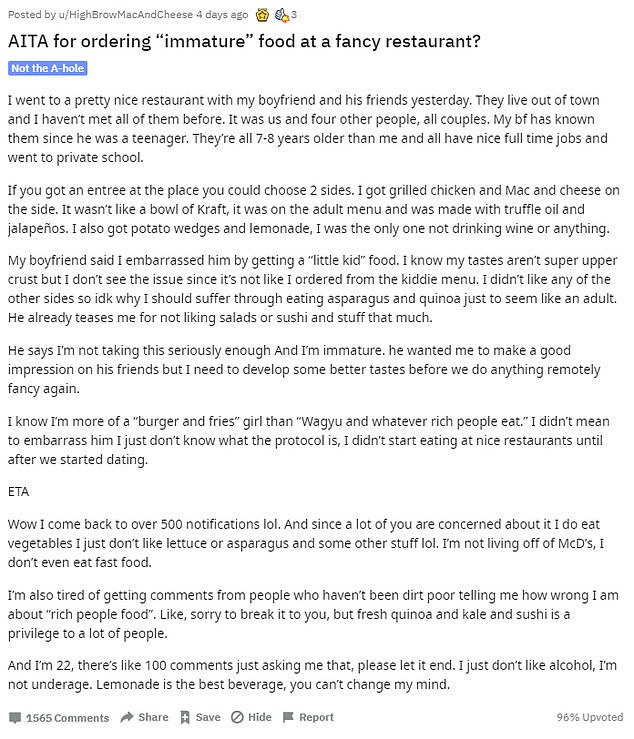 ‘I know my tastes aren’t super upper crust but I don’t see the issue since it’s not like I ordered from the kiddie menu,’ she said

‘I know my tastes aren’t super upper crust but I don’t see the issue since it’s not like I ordered from the kiddie menu.

‘I didn’t like any of the other sides so [I don’t know] why I should suffer through eating asparagus and quinoa just to seem like an adult. He already teases me for not liking salads or sushi and stuff that much.

‘He says I’m not taking this seriously enough and I’m immature,’ she went on. ‘He wanted me to make a good impression on his friends but I need to develop some better tastes before we do anything remotely fancy again.

‘I know I’m more of a “burger and fries” girl than “Wagyu and whatever rich people eat.” I didn’t mean to embarrass him, I just don’t know what the protocol is. I didn’t start eating at nice restaurants until after we started dating.’

Her post has earned quite a lot of attention in the past four days, with commenters slamming her boyfriend for his bad behavior.

‘I have eaten a lot of “rich people food” and gone to a lot of fancy restaurants in my time and your post has made me want some truffle oil Mac and cheese right now. Yum,’ wrote one. ‘Your boyfriend is a jerk and also is trying too hard.’

‘[The poster’s] boyfriend most likely overreacted to her completely normal food order because he’s either been downplaying that age gap or telling all his friends that [she] is “really mature for her age, you guys,”‘ said another.

‘Your boyfriend needs to man up,’ said yet another, while a fourth commenter said: ‘That’s why guys like this date younger, because women his age tell him to stick his snobbery up his a**. He enjoys patronising you.’

‘Your partner is supposed to support you, not trash you for ordering food you like. Why does he think that food is on the menu?’ said one more. ‘He’s gross for making you feel bad about your food choices.’

Others called him ‘stuck up,’ ‘unreasonably controlling,’ ‘judgmental,’