A doting boyfriend has been left red-faced after helping his partner dye her hair without protective gloves, leaving his hands almost permanently black.

Rachelle Broome, 26, from Warrington, Cheshire, decided to change up her ombre locks during lockdown, buying two bottles of permanent dark brown dye and asking boyfriend Hayden Cook, 27, to help reach the back of her head.

Delivery driver Hayden began to apply the dark dye to Rachelle’s hair barehanded, after the protective gloves that were provided split, but after finishing applying the dye and washing his hands, he discovered the substance wasn’t budging at all.

Rachelle took to Facebook to share the hilarious incident, and ask for tips on how to help it fade – with the post unexpectedly going viral, racking up thousands of likes and comments. 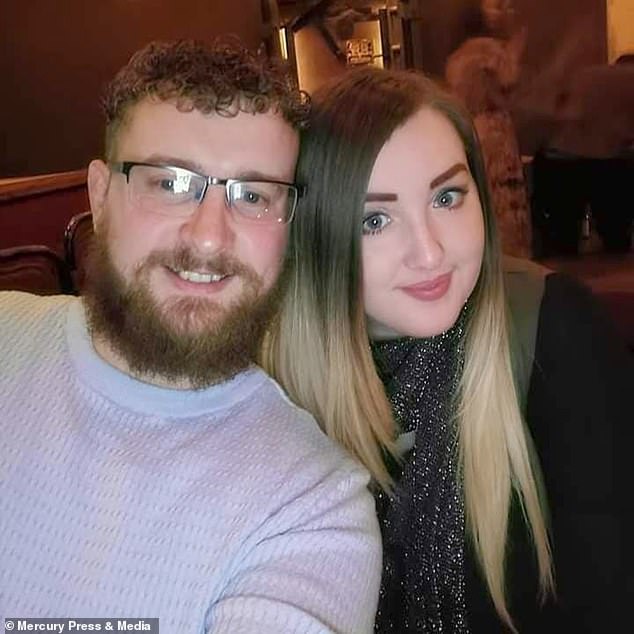 Dotting boyfriend Hayden Cook, 27, from Warrington, wanted to help his girlfriend Rachelle Broome, 26, to maintain her ombre locks during lockdown, but ended up with red cheeks and black hands 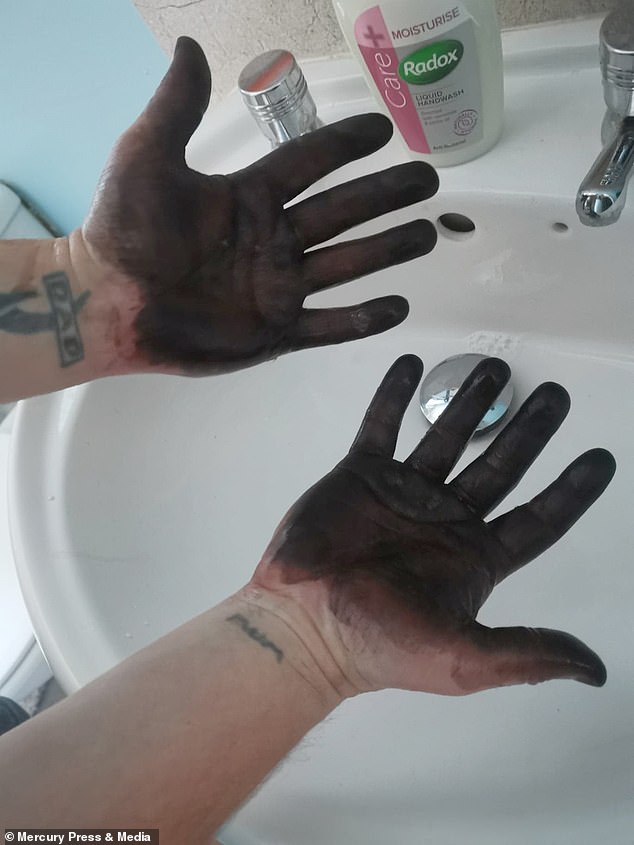 Hayden forgot to put protective gloves on before applying the colour on Rachel’s hair, and was left with his hand permanently dye black

Complaints handler Rachelle said: ‘I had brown to blonde ombre hair and wanted to change it up but I obviously can’t go to the hairdressers during lockdown, so I bought two boxes of dark brown permanent hair dye.

‘I was just going to do it myself but then I thought it might be easier if my partner Hayden did it for me as he would be able to see the back of my head.

‘He agreed to help and tried putting the gloves on that came with it, but he split them straight away because his hands must have been too big.

‘He said it was fine and he would do it without them – I didn’t even think it would stain his hands. 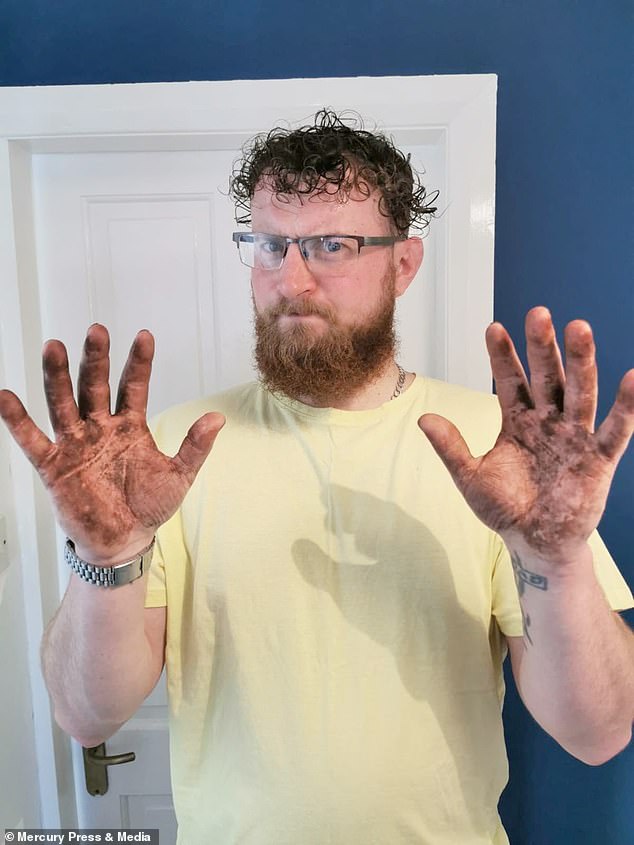 The love-bird managed to get some of the product off his palm using household products recommended by cleaning enthusiasts, but some of the colour still remains

‘He put the dye on my hair and it took a good 45 minutes to apply because my hair is quite thick.

‘Afterwards he went to wash his hands in the bathroom with soap and water and it wasn’t budging at all – the water was just running clear.

‘I suggested he tried turps because it’s good for getting paint off hands but still nothing, it wasn’t even lifting a tiny bit, so that’s when we started to panic – I felt so guilty!’

Rachelle frantically posted in a popular Mrs Hinch cleaning page on Facebook, desperate for tips on how to get the dye off poor Hayden’s hands before he went to work on Monday.

Rachelle said the couple tried everything to get rid of the dye, including Fairy washing up liquid, milk, The Pink Stugg and Elbow grease, but it would not budge 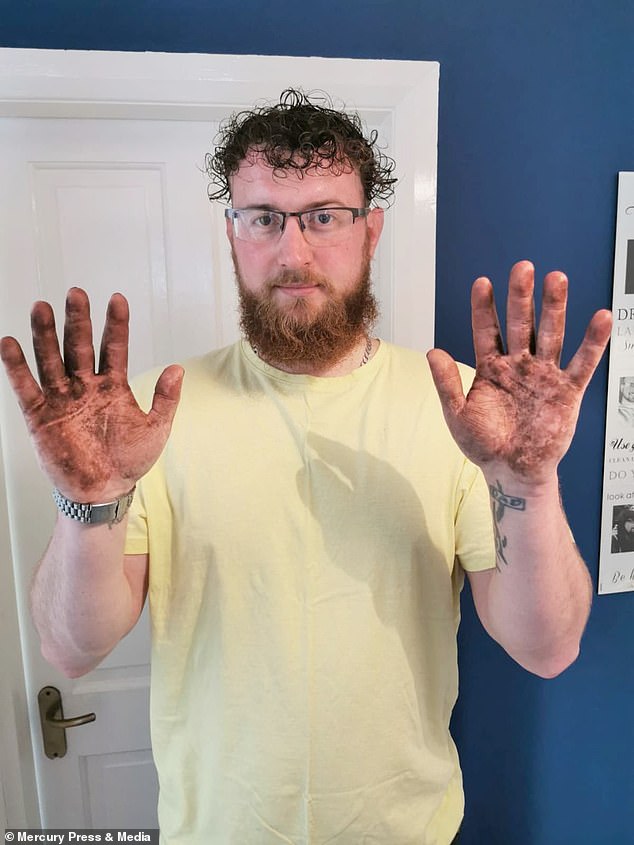 Even bleach did not get rid of all the dye on Hayden’s hair. The couple decided to leave the stains on, as his palms got painful from using different household products and scrubbing

Comments came flooding in so Hayden began frantically scrubbing his hands with everything under the kitchen cabinet, such as oil removal spray, stain removal paste, washing up liquid mixed with sugar and even bleach.

After none of these worked, Hayden’s hands began getting sore and the couple decided to leave it, much to his boss’ amusement on Monday when he turned up to deliver groceries with pitch black hands.

Rachelle said: ‘We tried scrubbing it with whatever we had under the kitchen sink and nothing worked. 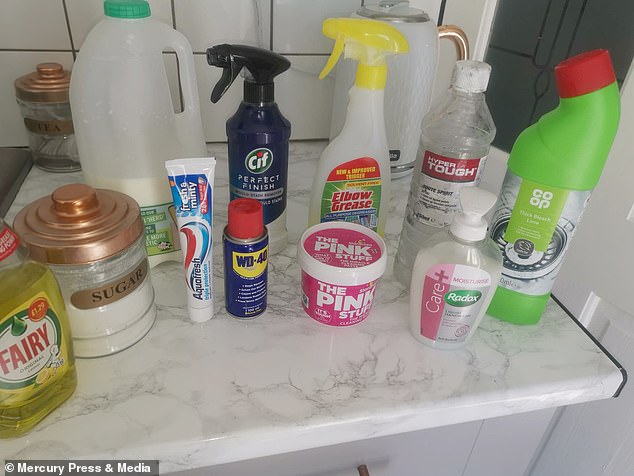 A picture show all the products the couple used, from washing up liquid to stain remover, grease remover and bleach 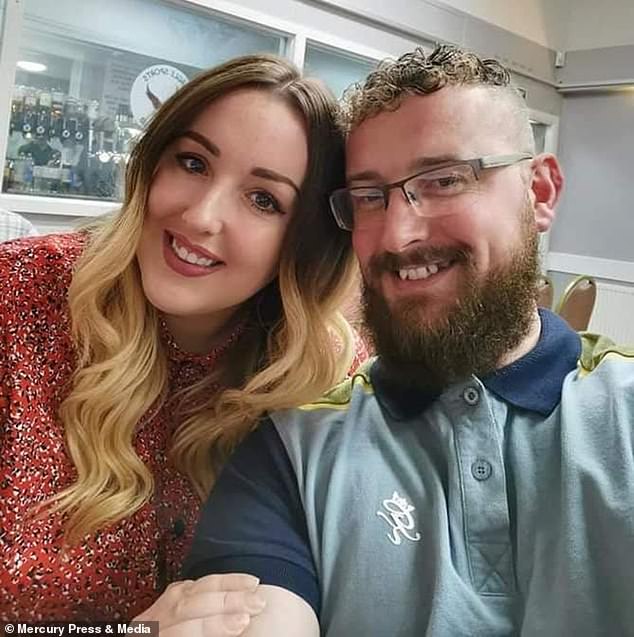 ‘A lot of people suggested rubbing cigarette ash over his hands as apparently that’s an old trick that hairdressers used to use, but we didn’t try that as we don’t smoke!

‘Hayden was back in work on Monday and going to people’s houses to deliver food, so he didn’t want people to see the stained hands because at a glance it looks like dirt and oil.

‘He’s been wearing latex gloves so people haven’t really batted an eyelid, but his boss spotted it at the depot and wondered what on earth he had done. 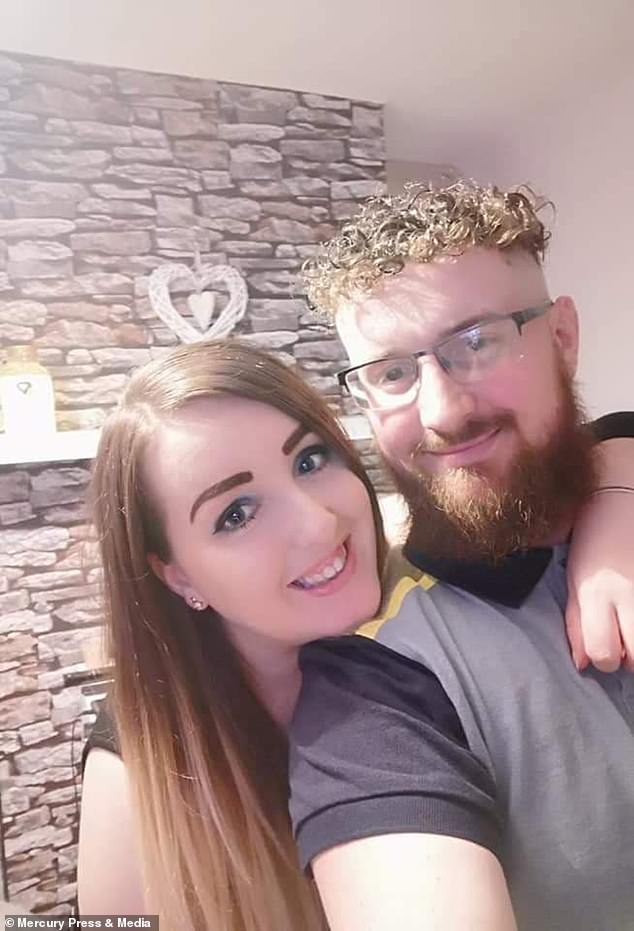 Rachelle joked Hayden would not be helping her with her hair anymore, unless he used proper gloves

The girlfriend said the dye had started wearing off on its own, and that the couple hope it will be all gone in a couple of days 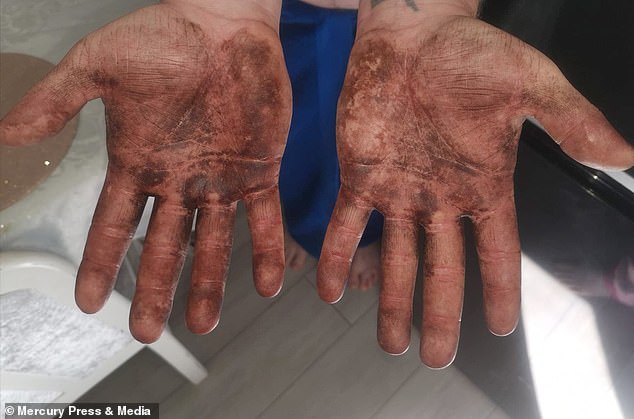 After a few washes, a lot of the dye still remained on poor Hayden’s hands. The couple laughed the accident off

‘His hands have faded a bit now because he must be sweating a bit in the gloves, so in two days hopefully it’ll be gone forever.’

With the post leaving almost 3,000 people in hysterics and 2,500 commenting with tips, the couple have been able to laugh the accident off.

Now, Rachelle believes she will be more apprehensive to ask Hayden to help with hair dye in the future.

She added: ‘At first you should’ve seen the look on his face but now he’s not too bothered because he’s used to it.

‘I don’t think he will ever dye my hair again – not unless he can get some man-sized gloves!’