DOCTORS refused to carry out tests on this woman when she told them her BREAST implants were making her feel like she was DYING – and instead accused her of being lazy and fat.

Fitness coach Emily Duncan, 25, from Columbus, Ohio, has always led an active lifestyle. As a child, Emily was a keen dancer and during her teens, she took up weight lifting leading Emily to compete in her first bodybuilding competition by the age of 18.

As such, Emily grew up with a lean and toned figure but she’d always had a smaller chest. As breast tissue is made of fat and not muscle, it’s the one area Emily couldn’t build up and after a period of deliberation, she opted to get breast implants in August 2016.

Upset: Bodybulider Emily Duncan, 25, gained 70lbs in a year after getting breast implants (right), which also caused a slew of other health issues before she had them removed 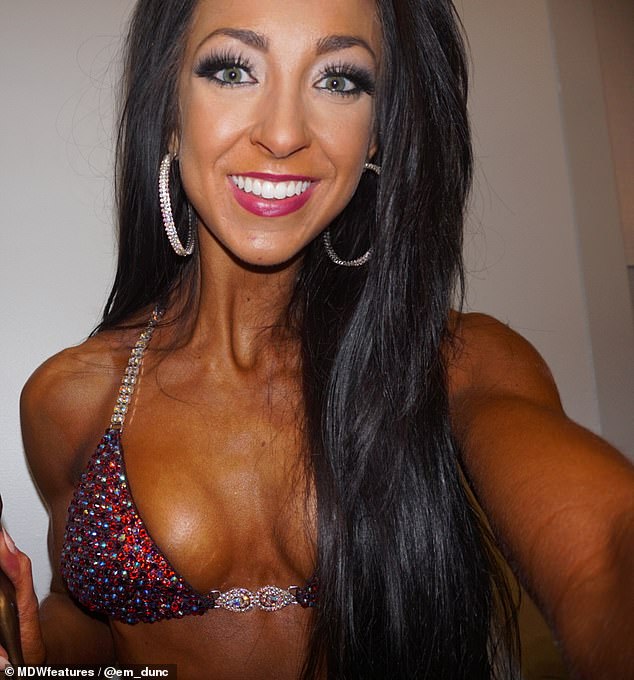 Changes: The fitness fanatic began bodybuliding at 18, but while she was always happy with her figure, she hated how small her breasts were so she got implants in 2016 (pictured)

Shock: Just two months after the implants, Emily’s weight began fluctuating (left), and she began battling fatigue and depression that remained until she had them removed (right) 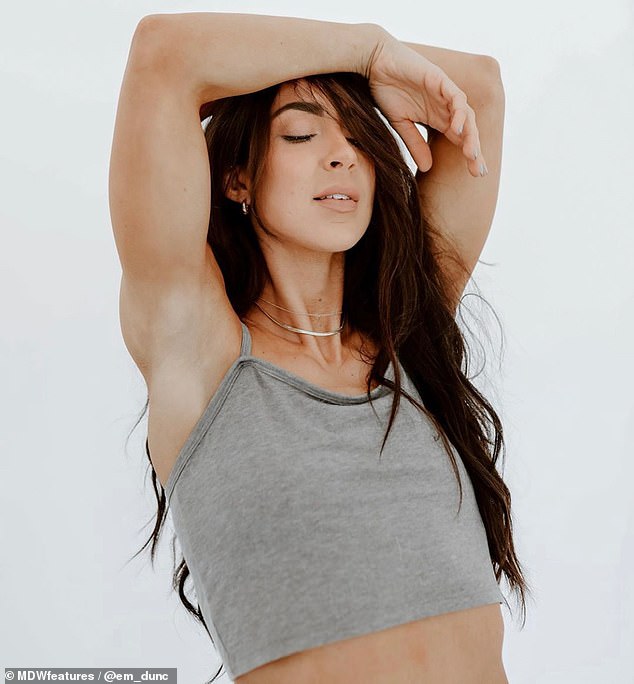 Struggle: Despite struggling with a slew of symptoms, Emily (pictured after her explant) says doctors refused to believe there was anything wrong with her, and simply told her to ‘eat less’

The $6,000 implants took Emily’s breast size from a 32B to a 32DD and for a while, Emily enjoyed her new fuller look. However just two months later, Emily began to experience a series of unexplained health complications.

Without changing her diet or exercise regime, Emily would experience ten-pound weight fluctuations – gaining 70lbs over the year without explanation. Emily’s psoriasis which had been in remission also began to flare-up again and her face became puffy.

Emily’s coach suggested she was ‘cheating’ on her diet but the fitness fanatic knew for certain that she wasn’t so she sought medical advice. Over the next two years, Emily spent around $12,000 on potential cures and diagnosis – none of which proved to be helpful or correct.

A reproductive endocrinologist put Emily on birth control pills after misdiagnosing her with polycystic ovary syndrome – a hormone imbalance.

Despite her many symptoms, doctors refused to carry out blood tests resulting in Emily having to fund her own. They simply told her, ‘exercise and eat less.’ 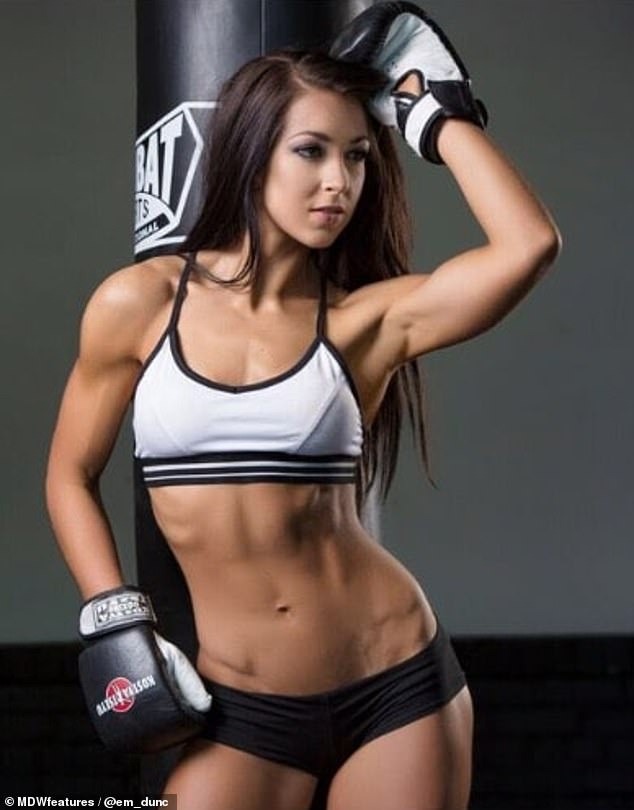 Changes: The bodybulider (pictured before getting implants) said, ‘I’ve always had a smaller chest so after thinking about it, I decided to get implants to balance out my frame’ 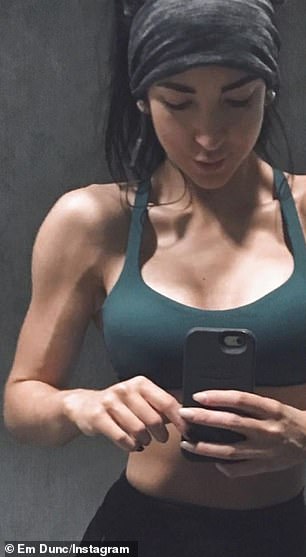 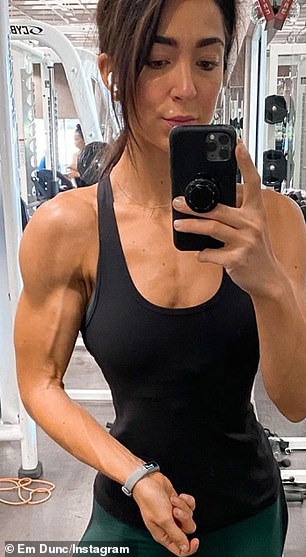 Uphill battle: Emily was only able to enjoy her fuller chest (left) for two months before she started experiencing health issues that she spent more than $12,000 trying to treat 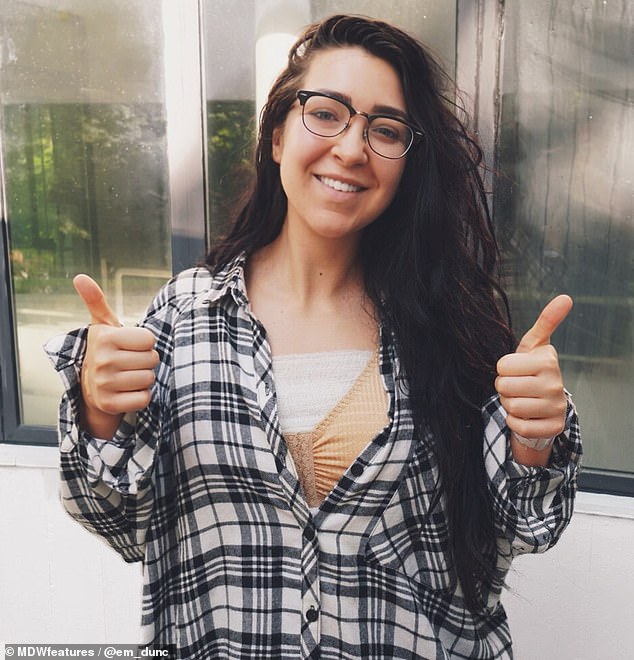 Help: It wasn’t until she found a breast implant illness support group online that Emily (pictured after explant surgery) realized that her implants may be causing her symptoms

A functional nutritionist put Emily on a $,1000 a month supplements plan to no avail. Emily also took thyroid medication and underwent genetic testing. Feeling like she had tried every helpline, it was on Facebook that Emily eventually found answers.

One day, Emily came across a breast implant illness support group on the social media site and immediately spotted symptoms of her own in the testimonies of other women. Her then-boyfriend initially disregarded the idea calling her a ‘hypochondriac’ – eventually believing her after seeing an influencer post about the same thing.

There’s currently no official diagnosis for breast implant illness but Emily took the idea to a doctor and much to her relief, the doctor confirmed that he’d had patients with similar symptoms who had strangely got better after removing their implants.

Having exhausted every other option, it was a no brainer for Emily and on August 21, 2018, Emily underwent the $12,000 explant surgery. Within days, the feeling of being trapped in her own body disappeared and Emily began to regain control.

Emily is now determined to raise awareness as it’s not just doctors who question the validity of this illness which is affecting so many women. Throughout the illness, online trolls told Emily that she’d simply ‘eaten too much Ben and Jerry’s and taken too many steroids.’

‘I’ve always been an active, healthy individual. I grew up dancing and then started lifting weights when I was sixteen,’ Emily said. 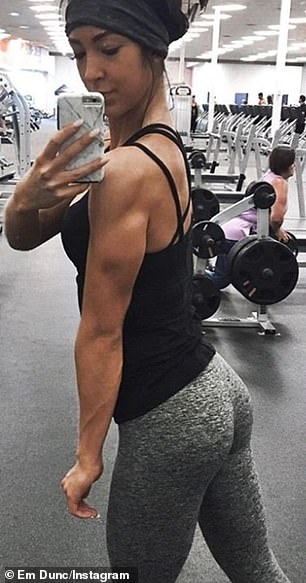 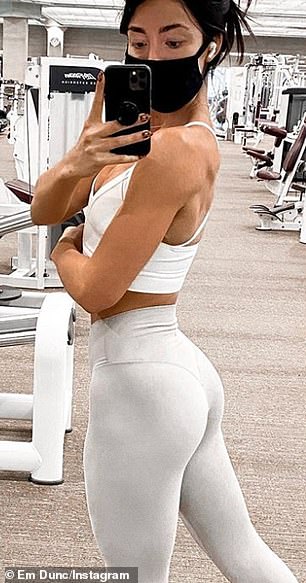 Transformation: In August 2018, Emily (pictured left with implants and right without) underwent the $12,000 explant surgery and within days, her symptoms began to disappear 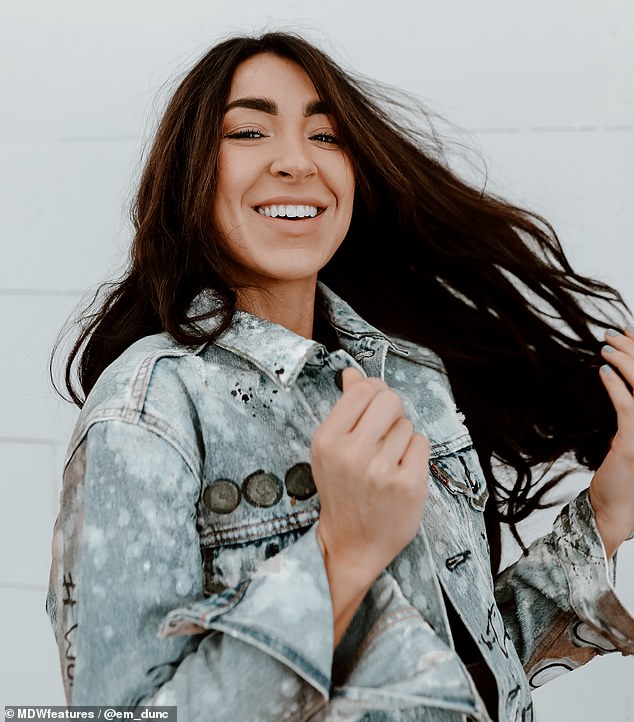 Health: Emily is now determined to raise awareness as it’s not just doctors who question the validity of this illness which is affecting so many women 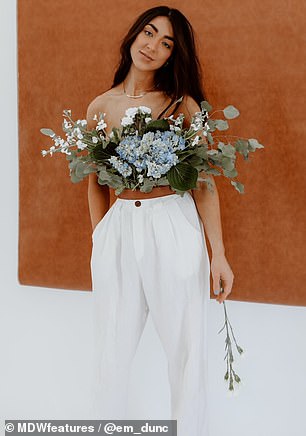 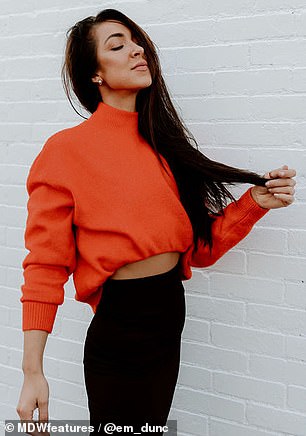 Cruel: Throughout the illness, online trolls told Emily (pictured after her explant surgery) that she’d simply ‘eaten too much Ben and Jerry’s and taken too many steroids’

‘I’ve competed in bodybuilding since I was 18 but I’ve always had a smaller chest so after thinking about it, I decided to get implants to balance out my frame. Breast tissue is the one thing fitness can’t ‘give’ you.

‘At first, I really enjoyed being able to fill out tops and bras but within two to three months, I started having massive weight fluctuations.

‘I began experiencing ten-pound weight fluctuations day to day with no change to my diet or training. I also started looking puffier in the face.

‘My psoriasis had been in remission for years but that flared up again and I was constantly tired and developed chronic depression – all seemingly for no reason at all.

‘I’m already an introverted individual but chronic depression worsened that tenfold. I went months without seeing my friends.

‘I knew something was wrong but I had no idea what. My coach at the time would allude to me ‘cheating’ on my diet but I knew I wasn’t.

‘I tried so many treatments and visited different kinds of health practitioners. I was put on birth control and misdiagnosed with polycystic ovary syndrome. I tried acupuncture and nutritional supplements. 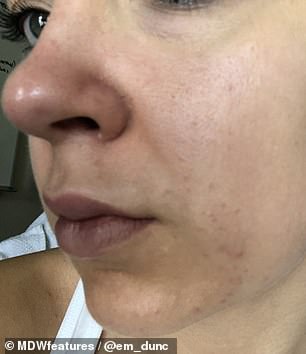 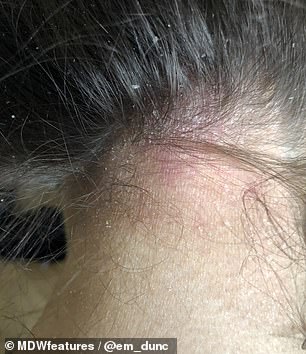 Symptoms: As well as weight gain and depression, Emily says her implants caused acne (left), and made her psoriasis return (right) 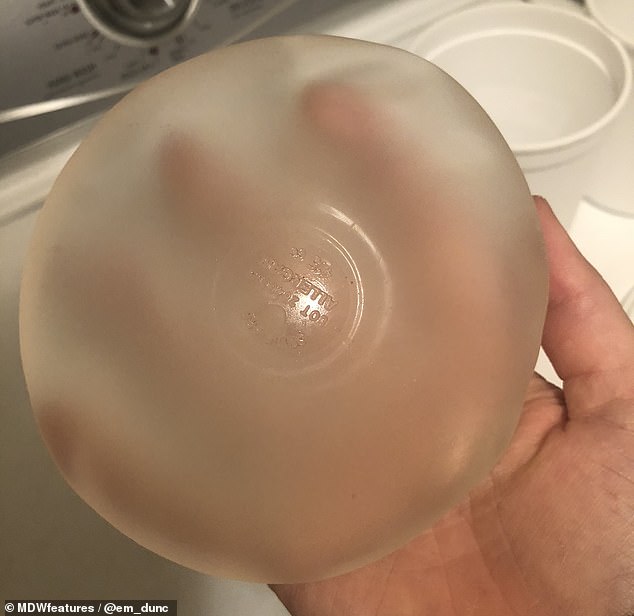 Goodbye: Emily’s implants took her from a 32B to a 32DD, and while she enjoyed her fuller figure for a few months, she says it wasn’t worth the years of suffering she endured 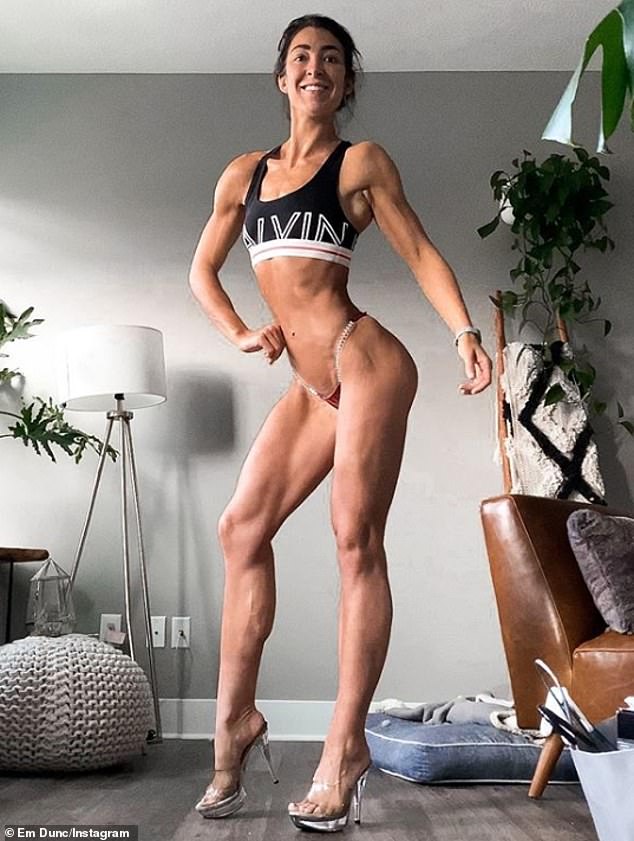 Tip top shape: Since having her implants removed, Emily’s body has been completely transformed and she says she feels in ‘control’ of herself again

‘I spent thousands on ordering blood work myself because doctors refused to carry out tests telling me to “exercise and eat less”.

‘I tried thyroid medication and genetic testing. In total, I spent over twelve-thousand dollars trying to find a cure.’

Eventually, Emily found some answers on a Facebook support group.

‘I’d been feeling so disconnected from myself – out of body and out of spirit. I felt like I was trapped in a simulation that wasn’t my actual life. Going so long without answers had been crushing.

‘My then-boyfriend didn’t believe me when I told him about breast implant illness. He thought I was being a hypochondriac. It was only when he saw an influencer discussing the same thing that he thought maybe I was right.

‘The next time I went to see my doctor, I suggested it to him. There’s no diagnosis so he couldn’t confirm but he said he’d seen similar patients unresponsive to treatment whose symptoms disappeared after they removed their plants.

‘He warned that there was no guarantee that explant surgery would stop my symptoms but I just knew that it was what I needed to do.

‘I found a surgeon within a few days of joining the support group and since I explanted, I’ve been symptom free. 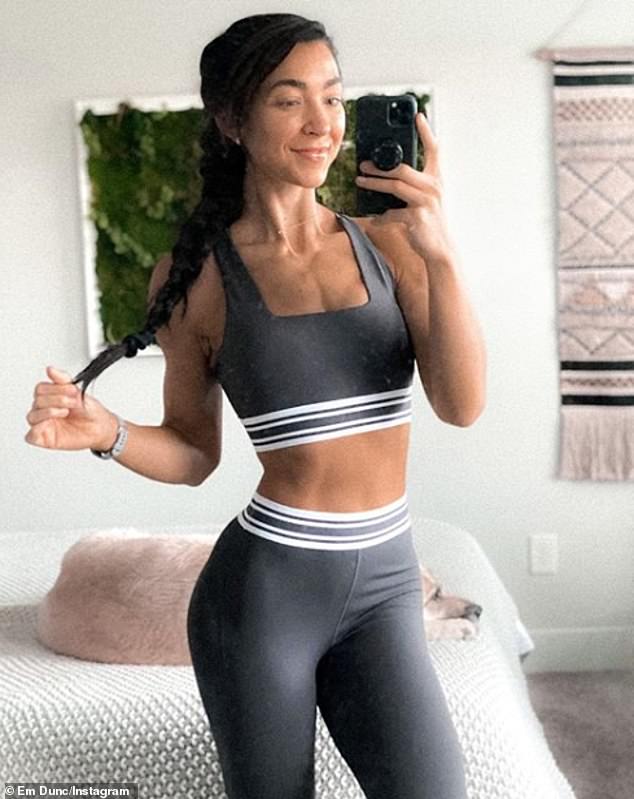 Doubt: ‘I spent thousands on ordering blood work myself because doctors refused to carry out tests telling me to “exercise and eat less,”‘ Emily (pictured without implants) said 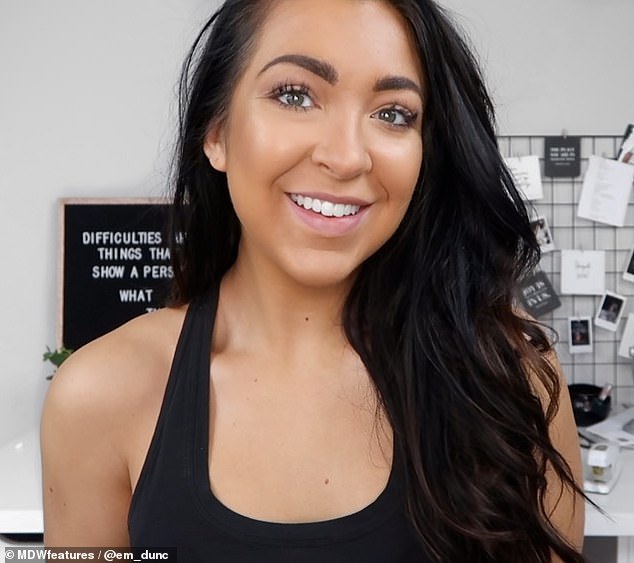 Help: The fitness fanatic is now sharing her story to raise awareness for other women who are sutrggling with the same issues

‘The only permanent changes I have are two six-inch long scars but my health is the most important thing. I couldn’t keep the implants in any longer and feel like I was slowly dying.’

Emily is now sharing her story online to raise awareness.

‘I’m not here to fear monger as this doesn’t happen to every woman with implants but I think it’s important to know the symptoms just in case,’ Emily said.

‘There are women who have had much worse cases than I did – whose livelihoods were practically ruined by implants. You have to dig down and ask yourself if you’re willing to take that risk in exchange for a larger cup size.

‘Explanting is an invasive and painful procedure so I’d advise people to consider all other variables in your life but if you know it’s right, also give yourself time to heal following the surgery.

‘Breast augmentations are one of the most popular plastic surgeries so why is more research not being done into these potential risks?

‘We need to protect women and we also need to listen to them when they express that something is wrong with their body.