BBC viewers were left in stitches this morning after Storm Dennis left a very rude-shaped amber weather warning over Wales.

The Met Office issues a red ‘danger to life’ weather warning for South Wales due to heavy downpours and flooding risk – the first since 2015 – while much of the rest of the country is also on high alert. 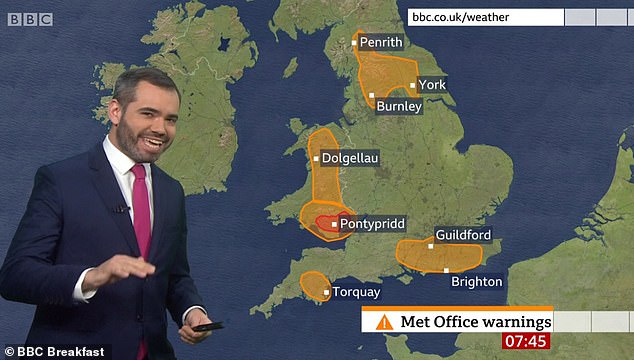 However, the phallic shape of the amber warning raised a few eyebrows among BBC Breakfast viewers earlier today.

Many took to Twitter to express their amusement, with some renaming the weather movement ‘Storm Penis’.

Another viewer tweeted: ‘The BBC weather people have drawn a big penis on Wales. A big amber penis warning.’

‘Be careful out there people, potential giant penis to cover South Wales today,’ one joked.

And one tweeted: ‘Drawing penises on Wales now is it @BBCNews? Someone’s having a laugh this morning.’ 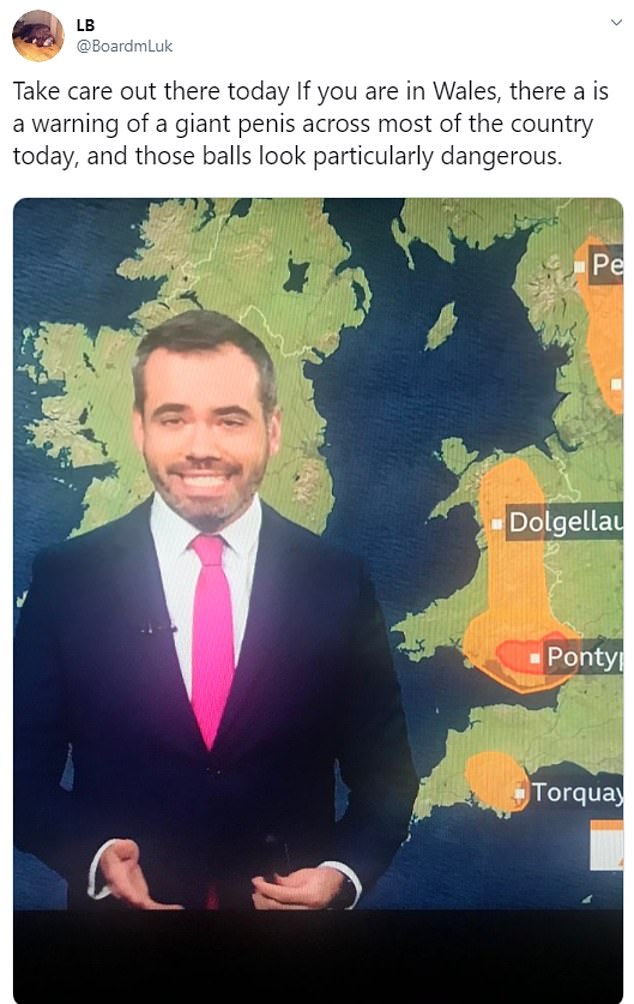 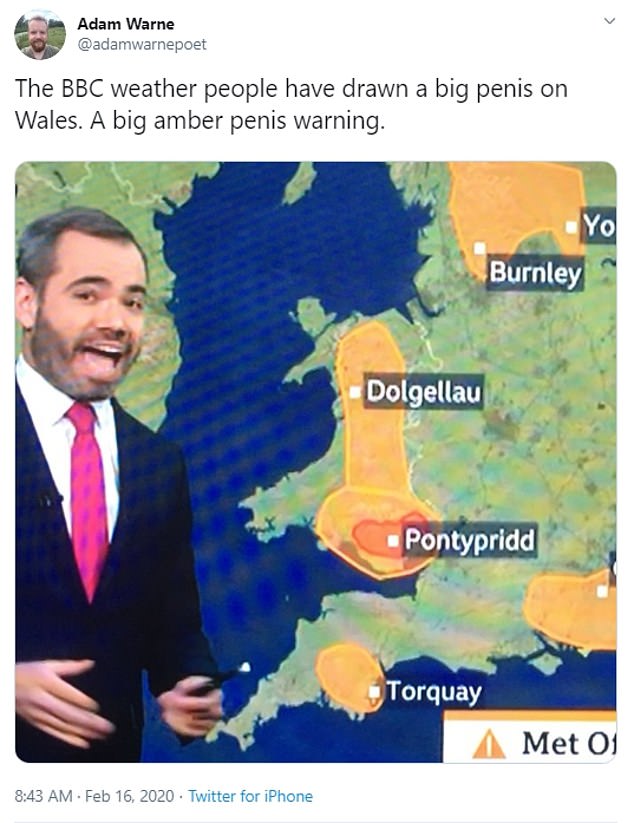 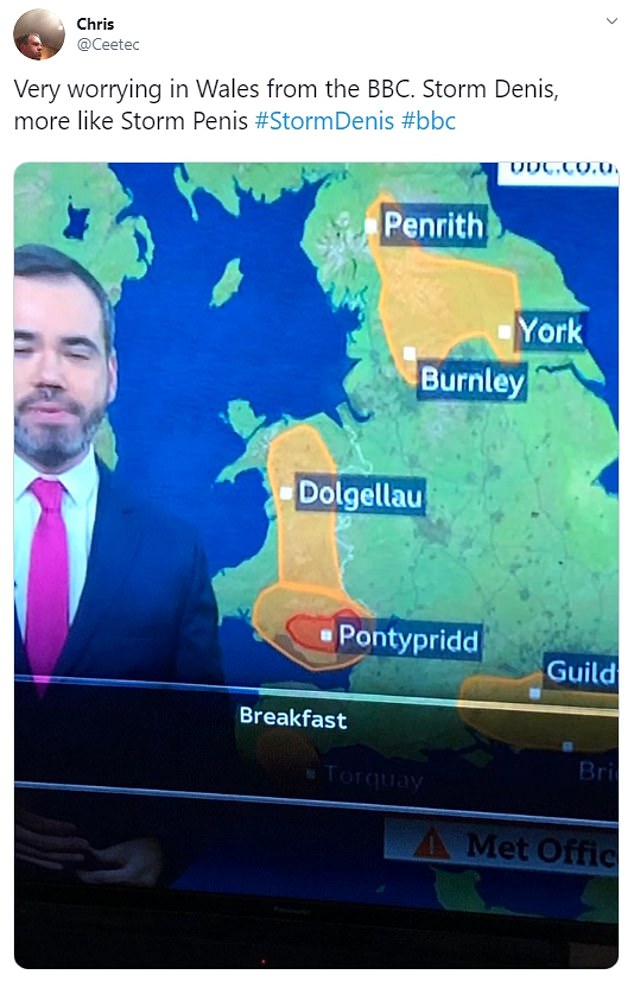 ‘Storm Dennis has drawn a massive c*** and balls over Wales. At least it has a sense of humour,’ wrote another bemused viewer.

And one joked: ‘The Met Office amber weather warning image for Storm Dennis made me laugh far too hard! Dennis is a big boy!’

‘Life-threatening’ Storm Dennis has already shut down roads and flooded railway lines this morning, with the Met Office issuing its highest level warning as it lashed the country with four inches of rain and fierce winds of up to 91mph.

At about 7am on Sunday there were 198 flood warnings in place, meaning immediate action is required, and 326 flood alerts telling people to be prepared, covering an area from Scotland’s River Tweed to the rivers of west Cornwall. 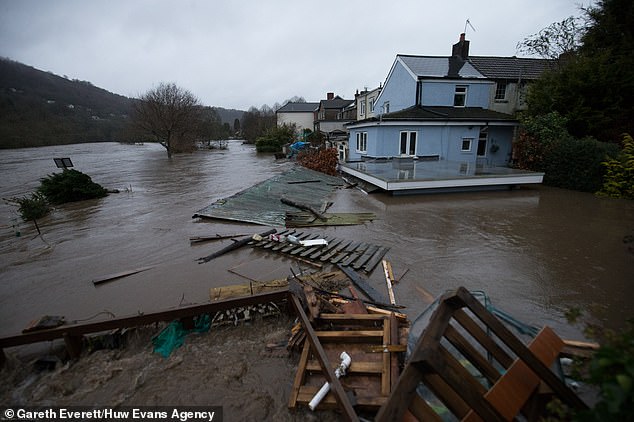 Flooding hits homes in Taffs Well, north of Cardiff in south Wales, as the River Taff, on the left, bursts it’s banks from the effects of Storm Dennis 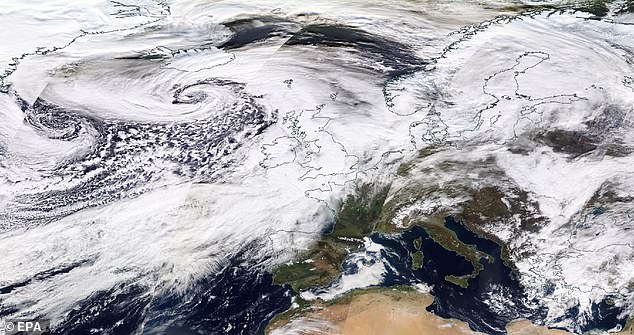 Rail services were suspended across South Wales after tracks were submerged by rain, while the line between Derby and Long Eaton was also closed.

Tredegar in south-eastern Wales received four inches of rain, while the fastest gust recorded in the same period was in Aberdaron where 91 mph was measured at 6pm on Saturday.

Flooding saw the M54 westbound closed at Telford, along with the A616 around Stocksbridge in South Yorkshire and the A52 between Stragglethorpe and Gamston in the East Midlands, Highways England said.

The Met Office has issued amber alerts – meaning people must be prepared to change plans and protect themselves and their family from the storm – for parts of Yorkshire, Wales, Devon, East Sussex and Kent.