A bar owner has shared a biting response to a negative Facebook review from a disgruntled customer after her sister-in-law’s 50th birthday party at the venue.

The scathing review, left by ‘Jo’, said that her party had been met with ‘an awful attitude’ from staff at The Cowshed at Hucknall in Nottinghamshire.

Jo said she was outraged that the party had been told to leave and were barred – despite spending £700 on drinks and pizza – because they were too drunk, saying she’d ‘never been spoken to in such a way’.

She admitted that one of the party had vomited on the floor, but said that they had cleaned it up so it shouldn’t have been a problem for the staff.

Unwilling to let the comments go unanswered the owners of the pub responded with a sarcastic post on the bar’s Facebook page calling the group ‘entitled little toddlers’. 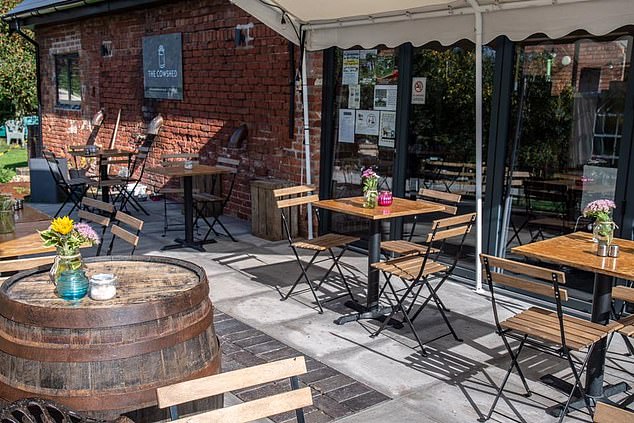 The owners of The Cowshed in Hucknall, Nottinghamshire, have hit back after a customer left a scathing review despite their own bad behaviour

In her rant, Jo said that the party were told ‘we must drink up and leave because someone had told them we were all too drunk’.

She continued: ‘Take into account the money we had spent – to be then told half an hour later the owners wanted us out as we had stood up – bearing in mind we were stood up next to our table away from anyone else – and that we were barred.

‘I have never been spoken to in such a way.’

The review admitted that ‘yes our family member was sick and YES WE CLEANED IT UP’ before stating that staff were ‘huffing and puffing’ about doing their job.

Owners of The Cowshed wrote: ‘Hi Jo, thanks for reaching out! We love feedback, whether it be positive or negative, we especially love feedback like this so others can see the type of people we have to deal with sometimes. 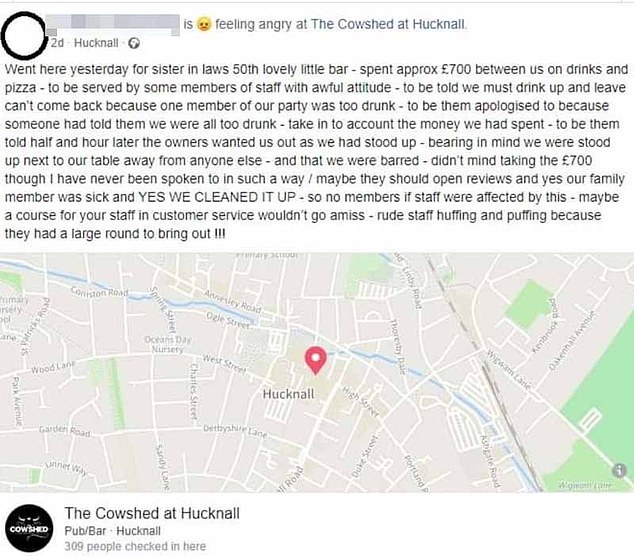 Here ‘Jo’ leaves here scathing review of The Cowshed in Hucknall, stating that she had ‘never been spoken to in such a way’

‘First of all, I’ll address the “£700” that you and your party claim to have spent… now, we both know this isn’t true don’t we, Jo… it’s not even remotely accurate as to what you spent, but I’ll crunch the numbers for you.

‘Our most expensive pizza on the menu is £9.00, this means that if you ordered only pizzas, you’d have to order 77 of them to be even close to spending £700. 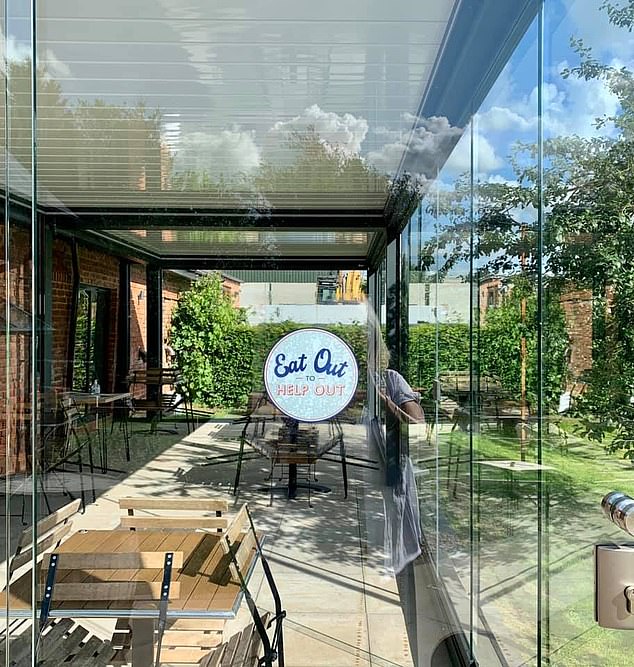 The bar and restaurant said that it did not usually bar ‘paying customers’ and denied barring the group on the night, but then added that they had been barred from this point onwards

The post then added that since ‘Jo’ appeared to be having trouble with her ‘memory and maths’ that they had pulled up the table’s receipt from their till system, a bill totalling £280.

It added: ‘What you and your party spent, Jo, was a far more realistic and believable £280 (£225 on 5 rounds of drinks and £55 on 8 pizzas). If you are going to lie, embellish, or try to fabricate a ridiculous narrative about your time at our bar… at least make it a believable one.’

Not finished, the comeback continued: ‘With the ironic exception of the young adults that were with your group and one or two others, you all acted like belligerent, entitled little toddlers from the moment you walked through our gates.’ 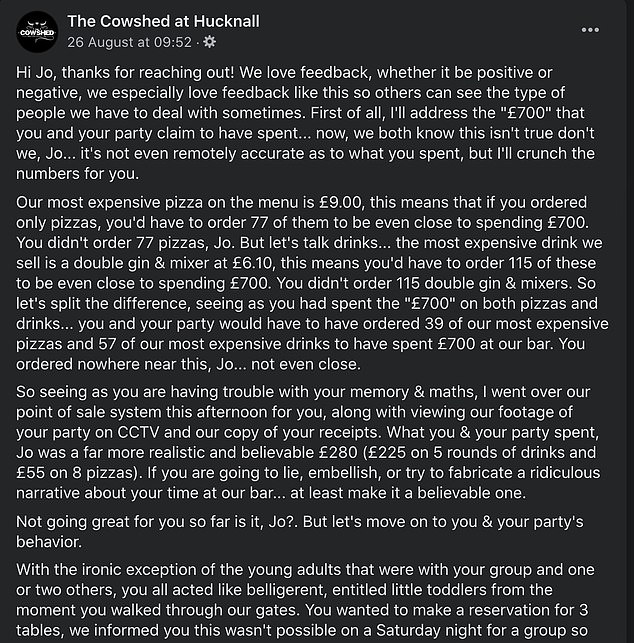 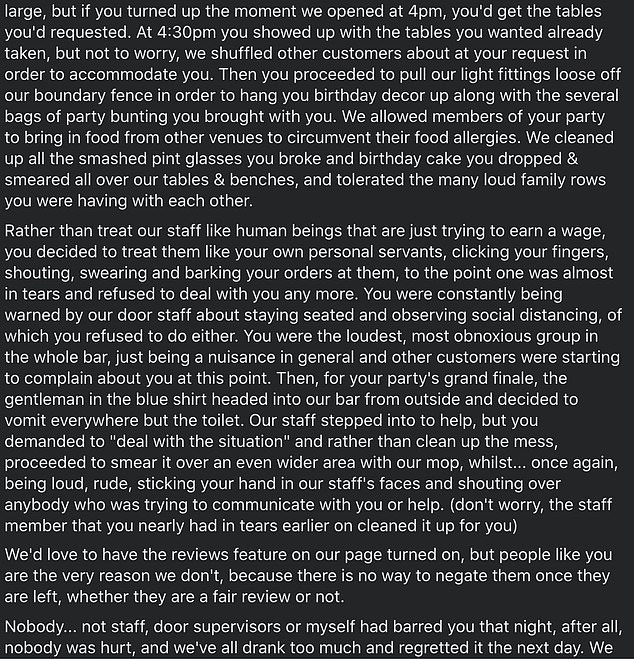 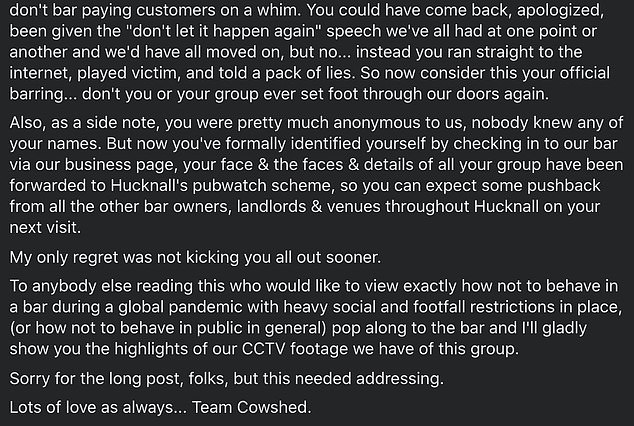 The post explained how the group had been told they were unable to book three tables on a Saturday night for such a large group – and were instead advised to turn up when the bar opened at 4pm to get their tables.

Despite this the group turned up at 4.30pm to find the tables they wanted full. The bar then ‘shuffled’ customers around to accommodate their requests.

The post also accused the group of smearing birthday cake around the table and benches, breaking light fittings and having ‘loud family rows’.

But concluded with their biggest grievance, the way the group had treated staff like their ‘own personal servants’.

It read: ‘Rather than treat our staff like human beings that are just trying to earn a wage, you decided to treat them like your own personal servants, clicking your fingers, shouting, swearing and barking your orders at them, to the point one was almost in tears and refused to deal with you any more. 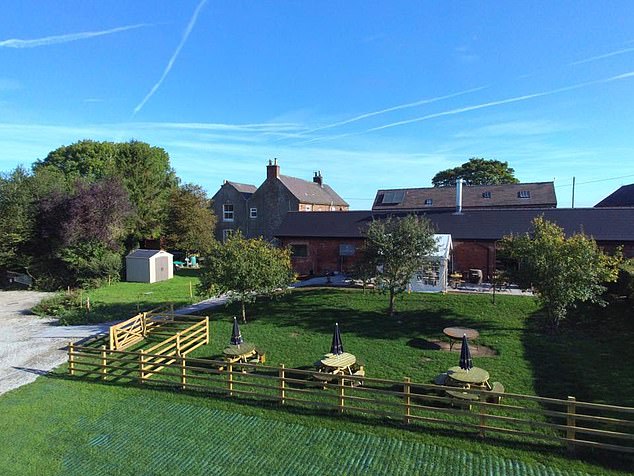 ‘You were constantly being warned by our door staff about staying seated and observing social distancing, of which you refused to do either.

‘You were the loudest, most obnoxious group in the whole bar, just being a nuisance in general and other customers were starting to complain about you at this point.

‘Then, for your party’s grand finale, the gentleman in the blue shirt headed into our bar from outside and decided to vomit everywhere but the toilet.

‘Our staff stepped into to help, but you demanded to “deal with the situation” and rather than clean up the mess, proceeded to smear it over an even wider area with our mop, whilst… once again, being loud, rude, sticking your hand in our staff’s faces and shouting over anybody who was trying to communicate with you or help. (don’t worry, the staff member that you nearly had in tears earlier on cleaned it up for you).’

Claiming that they had not, as stated in the original review, barred the group as ‘we don’t bar paying customers on a whim’, the bar owners then said that the group could ‘consider this your official barring’ for ‘playing victim’ on the internet and telling ‘a pack of lies’.

The bar owner concluded: ‘My only regret was not kicking you all out sooner.’