When you think of lasagne, you are likely to picture stacks of pasta coated in a rich tomato sauce and lashings of melted cheese.

So perhaps it’s no wonder that Sydney baker Walla Abu-Eid‘s reinvention of the classic Italian dinner as a decadent, cheesecake-style dessert has attracted widespread attention on social media.

So keen is the interest that the 31-year-old mother-of-three – whose cakes have garnered an Instagram following of 83,300 – has now revealed the simple recipe for her viral creation, which has been shared by more than 60 global news outlets.

In a video filmed for Instagram TV, Ms Abu-Eid – who learned to bake on Google and YouTube and says ‘anyone can do the same’ – showed viewers how to make their own with five ingredients: sugar, cream, vanilla extract, Lotus Biscoff spread and biscuits. 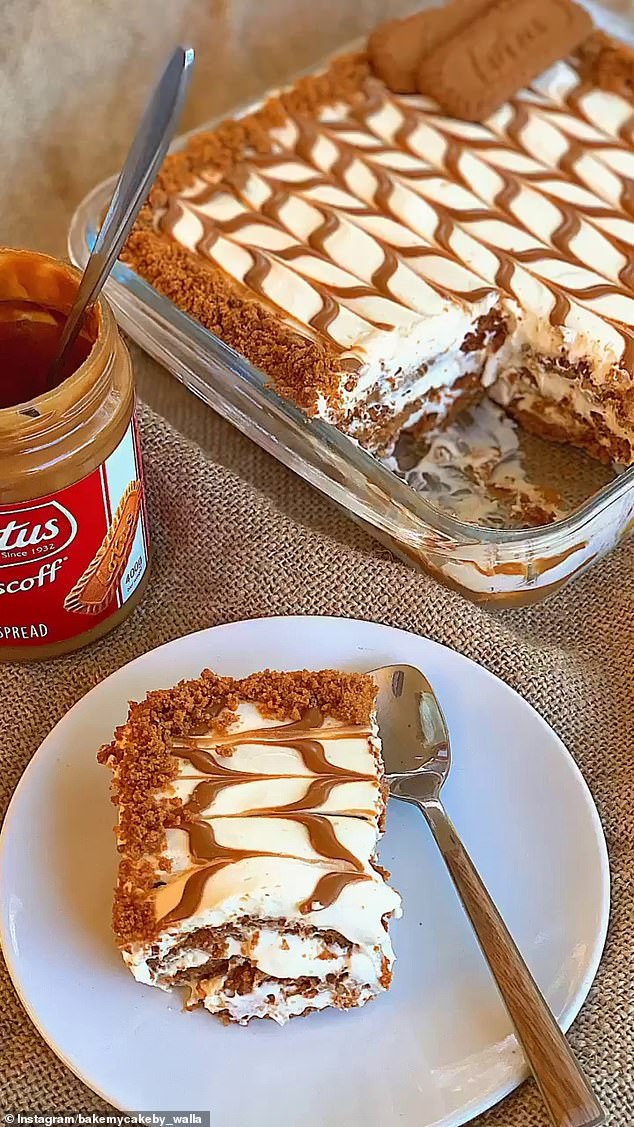 To make the filling, Ms Abu-Eid mixes a carton of thickened cream with a tablespoon of sugar and a dash of vanilla extract, whipping until ‘soft peaks’ form in the mixture.

It should be thick and slightly stiff without being over beaten, which causes the cream to curdle.

Next, she heats a jar of Biscoff spread in the microwave for 30 seconds to soften – and then gets down to assembling the dessert.

Ms Abu-Eid lines the base of a glass baking dish with Biscoff biscuits, then covers them with the sugar and cream mixture.

She drizzles some melted Biscoff spread over the cream, then repeats the process three times, ending with a layer of cream on top. 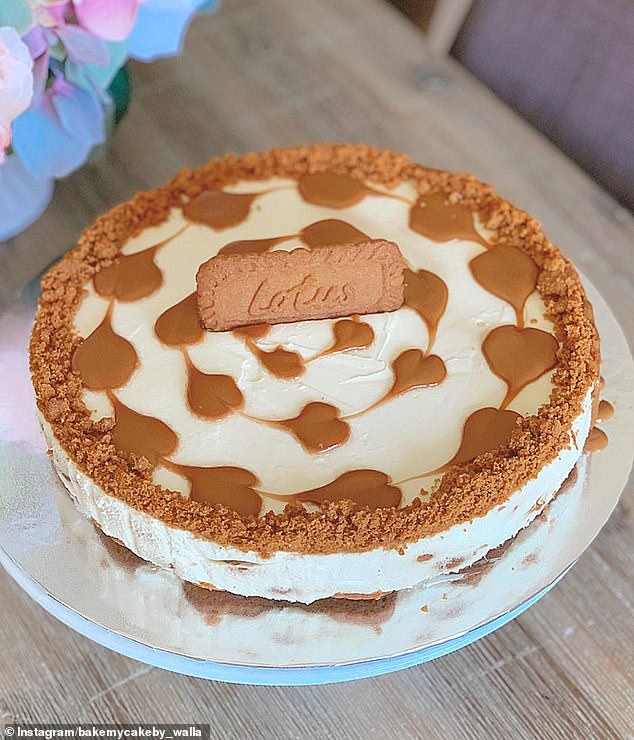 Ms Abu-Eid also makes the lasagne in the shape of a classic cheesecake (pictured) for customers on her up-and-coming Instagram bakery page, Bake My Cake by Walla 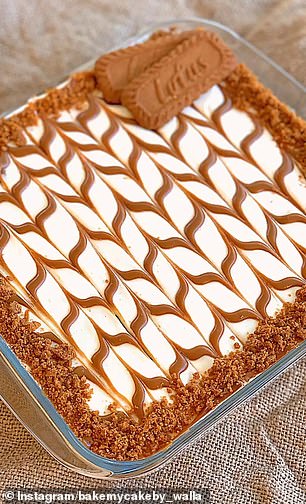 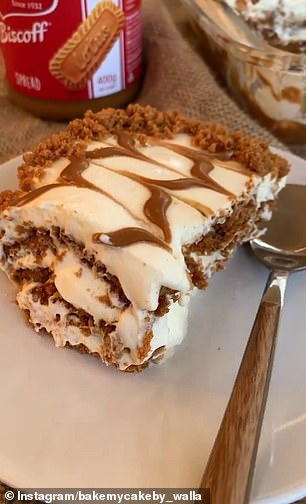 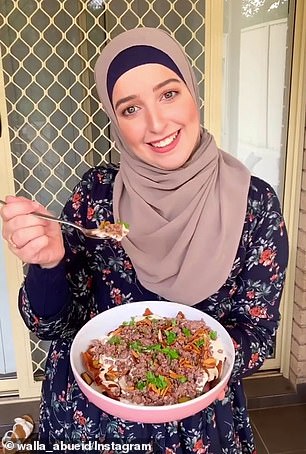 Scooping any remaining spread into a piping bag, she pipes thin lines onto the cream and runs through them with a skewer or toothpick, creating an ornate triangular pattern.

Finally, she crumbles leftover biscuits into fine crumbs and sprinkles them around the edge of the dish for decoration.

Fans have branded Ms Abu-Eid’s dessert lasagne a ‘work of art’ and a ‘culinary masterpiece’ on social media, where a video of the preparation has racked up over 85,000 views.

The gifted baker also makes the lasagne in the shape of a classic cheesecake for customers on her up-and-coming bakery page, Bake My Cake by Walla.

And it’s not the only Biscoff-inspired dessert on Ms Abu-Eid’s Instagram feed, which is filled with carefully curated photos of doughnuts, mousses and tarts all built around the distinctive cinnamon sweet. 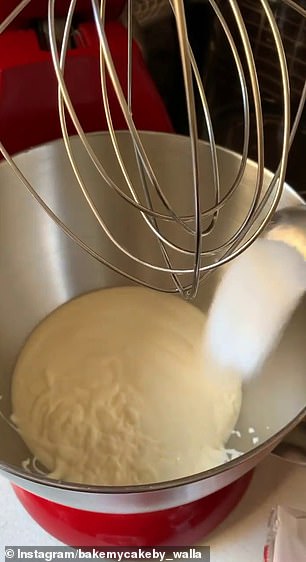 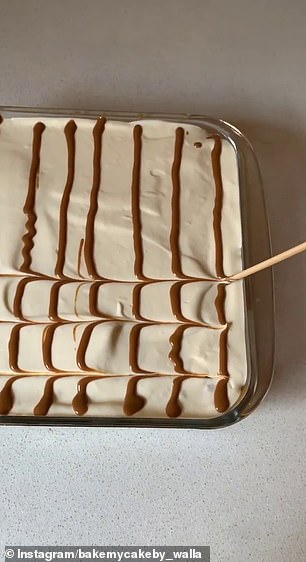 To make the filling, Ms Abu-Eid mixes a carton of thickened cream with a tablespoon of sugar and a dash of vanilla extract (left); she decorates the dessert with melted Lotus Biscoff spread fanned out with a skewer to form an ornate pattern (right)

One jar of Lotus Biscoff spread

One carton of thickened cream

One tbsp of sugar

1. Add thickened cream to mixing bowl along with one tablespoon of sugar and a dash of vanilla extract.

2. Whisk until ‘soft peaks’ form – it should be thick and slightly stiff.

3. Heat Biscoff spread in the microwave for 30 seconds until soft.

4. Cover the base of a baking dish with a layer of full Lotus Biscoff biscuits.

5. Add a layer of cream mixture, followed by a generous drizzle of melted Biscoff spread.

6. Repeat three times, ending with a cream layer on top.

7. Scoop leftover Biscoff spread into a piping bag and pipe thin lines onto the top of the cream.

8. Run a toothpick or skewer through the lines to create a triangular shaped pattern.

9. Crush leftover Biscoff biscuits into crumbs and sprinkle around the edge to finish.

Speaking to Daily Mail Australia in July, Ms Abu-Eid said her swift success on social media has been ‘crazy’.

‘People tell me my cakes look so professional, but I really just do it as a hobby whenever I have time,’ she said.

Asked if she had secured a paid partnership with Lotus to promote the brand, the baker laughed and said a collaboration like that would be a dream come true.

‘I wish I had a deal with Biscoff, I just love the flavour. I actually did contact them, but no word yet!’ she said. 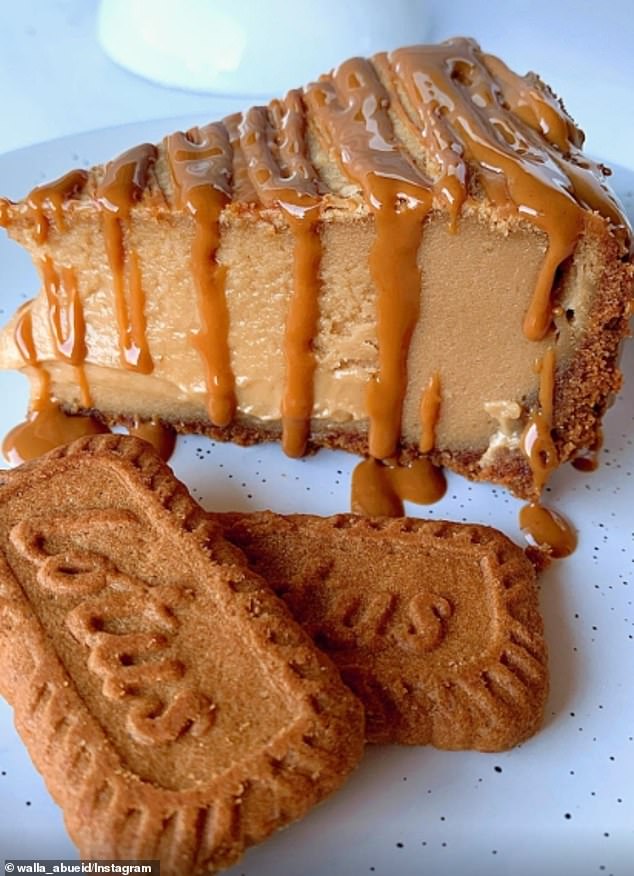 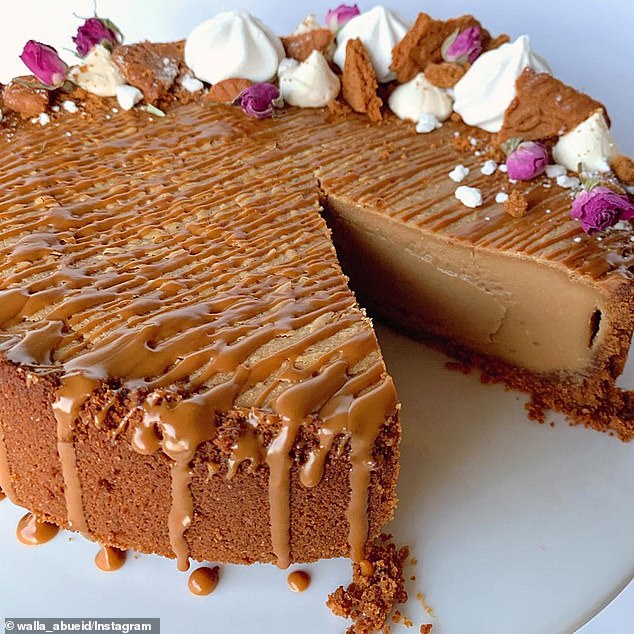 On the back of the extraordinary baking craze that’s swept Australia and the rest of the world since the coronavirus crisis began, Ms Abu-Eid shared tips and tricks for first-timers looking to step into the kitchen.

Patience and practice are crucial, she says, but there’s no need to enroll in expensive courses.

‘I didn’t go to any academy or take any classes, [I learned] from the internet – lots of Googling, reading blogs and watching YouTube,’ she said.

‘I’d look at clips over and over until I’d gotten everything I could from each one, then move on to the next.’

Ms Abu-Eid never lets herself run out of five staple ingredients – eggs, butter, sugar, flour and vanilla extract – which she says forms the base for almost every cake. 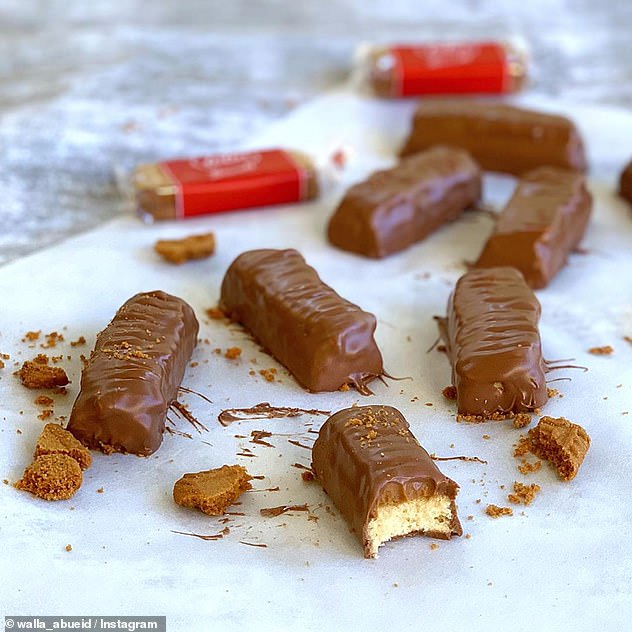 Ms Abu-Eid’s Lotus Biscoff Twix bars, made from shortbread, milk chocolate and half a jar of the spiced cinnamon spread

While she’s content to keep baking as a much-loved hobby rather than a full-time business, Ms Abu-Eid hopes to pass her skills to at least one her three young daughters.

‘My second girl Masa is very interested, she’s always asking to help in the kitchen,’ she said.

‘We went to the toy store last weekend and she picked a baking set because she said she wants to be just like mum!’

Whether she follows in those footsteps remains to be seen, but it’s clear that Masa and her sisters are exceptionally lucky to have a teacher as gifted as their mother.

To view the full range of Ms Abu-Eid’s cakes or place an order, visit her business Instagram account Bake My Cake by Walla.